Home
ASIAIR
ASIAIR PRO: What Changes And Improvement Have Been Made?

Back to July 2018, the first-generation ASIAIR was released.

About one year later, the second generation, ASIAIR PRO was released.

As so many people are curious about the differences between these two models, here we list 10 most important changes in ASIAIR PRO that may help you have a better understanding on this little box. 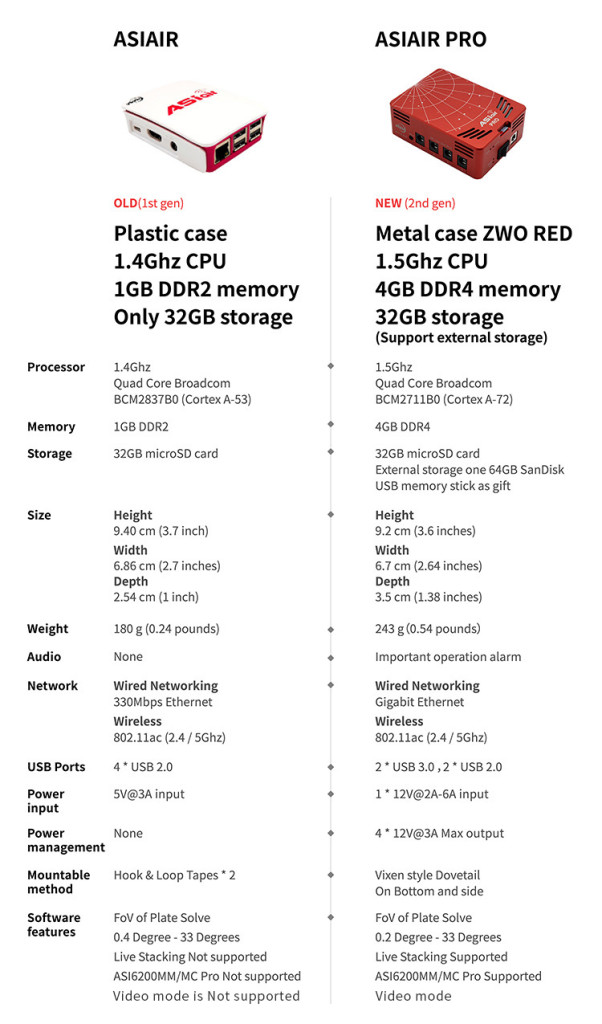 The first generation ASIAIR was crafted with a plastic shell, while ASIAIR PRO’s shell is made out of aluminum and processed by CNC tech. The surface is anodized, which can be quite hard-wearing and shatter-proof. 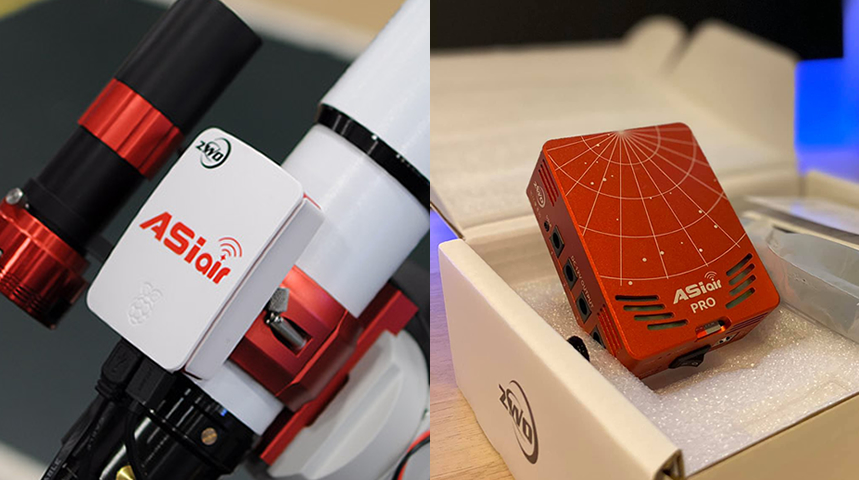 The design of ASIAIR PRO also changed a lot. It is colored in vibrant Ferrari red and painted with laser star maps of the constellation Ursa Minor and Ursa Major in the front, which symbolizes the distant sky and bright stars.

Besides, ASIAIR PRO was symmetrically slotted in the front, bottom and the side. These slots could not only help enhance WiFi transmit, but also help heat dissipation.

There is no doubt that 1.5Ghz is faster than 1.4Ghz. The testing result shows the CPU performance of ASIAIR PRO has been significantly improved by 50% approximately. It calculates faster, works faster and is going to greatly save your time.

ASIAIR only has 1GB of DDR2 RAM, while ASIAIR PRO has 4GB of DDR4 RAM, not only expanding the memory, also accelerating the access speed rapidly.

As to storage space, ASIAIR is equipped with a 32GB micro SD card, the same as ASAIR PRO.

In addition to the 32GB SD card, ASIAIR PRO can also be connected to other storage devices. You can use the 64GB SanDisk USB memory stick which comes with the package.

For now, the available storage space of ASIAIR PRO is up to 84GB, which is enough to support your outdoor shooting. 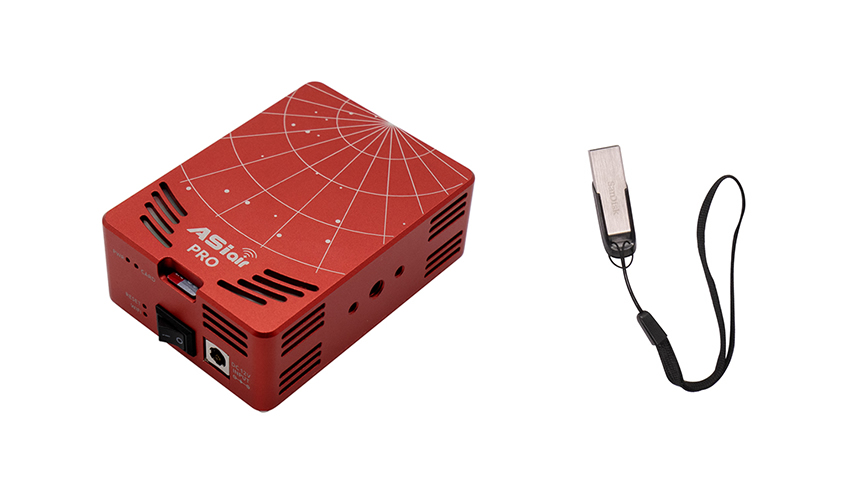 In terms of size and weight, the second generation and the first generation are almost the same. However, considering ASIAIR PRO comes with highly-integrated power management module, multiple interfaces, and various openings for installation, it can be regarded as very small-sized and light-weighted.

Off – Startup files got damaged

Off – WiFi Networking not started

You can use the RESET button to reset the WiFi network configuration.

In addition, there will be alarms in actual operation due to different situations, so that all the operating are under control. 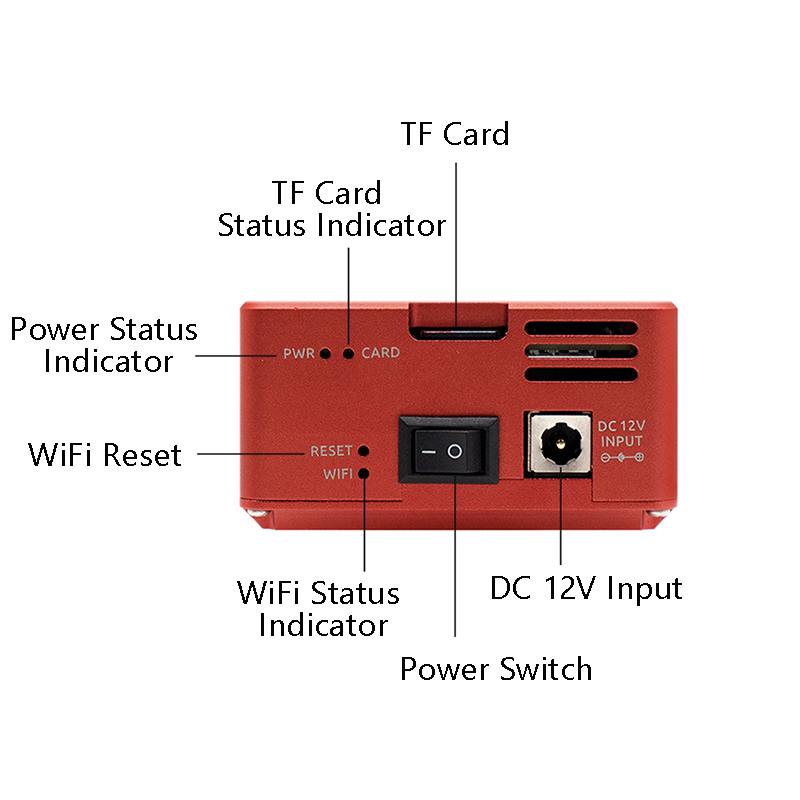 ASIAIR and ASIAIR PRO both support wired connection via Ethernet cable from ASIAIR to your internet router. ASIAIR offers a max speed of 330Mbps, while ASIAIR PRO can get Gigabit speeds. The transmission speed of ASIAIR PRO increases by 300%.

As to wireless connection, you may have noticed that when you’re wirelessly connecting the first generation ASIAIR box to the ASIAIR application, you will have the problem of not being able to use your phones or tablets to access the internet during the application run time.

This problem got solved in ASIAIR PRO. The WiFi station mode will help you wirelessly connect ASIAIR to your WiFi router. You are free to access the internet now. Also, the signal transmission range of ASIAIR PRO is greatly expanded, you can now control your setup via ASIAIR PRO in anywhere of your house.

It is recommended that using the USB 3.0 ports to connect with the main cameras since the transmission speed will be 10 times quicker than using USB 2.0 ports.

What’s more, ASIAIR PRO also has a DSLR camera shutter release port. You can now connect some old Nikon and Canon cameras to ASIAIR PRO and make long-exposure over 30 seconds. 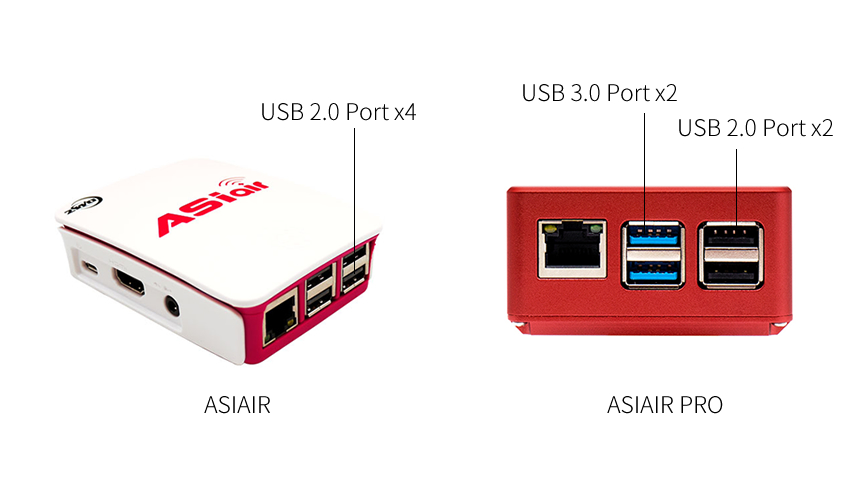 While ASIAIR PRO has one 12V@2A-6A input, and four 2V@3A Max outputs, which means you can power other equipment with ASIAIR PRO, instead of dragging the long cables towards the power supply. The wiring can be very easy and orderly. 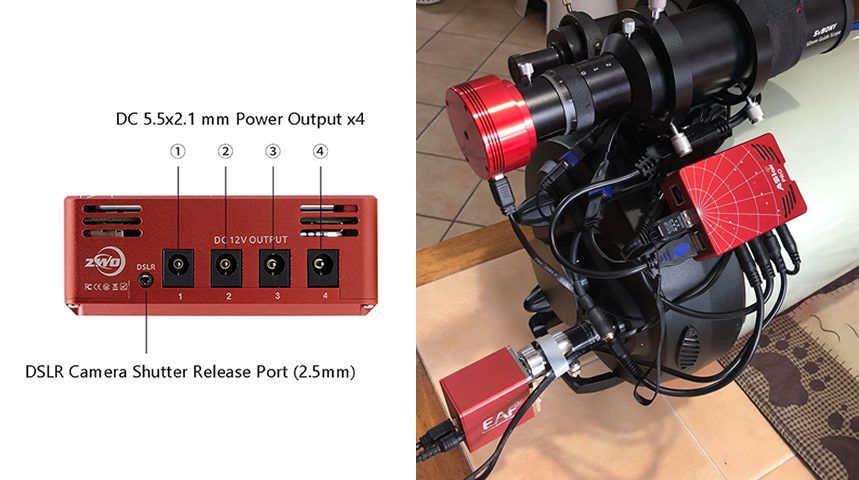 ASIAIR can be mounted to your gear through hook & loop tapes.

ASIAIR PRO has M4 and 1/4 inch openings on the bottom and the side, with the use of the dovetail, the installation and removal will be quite easy. 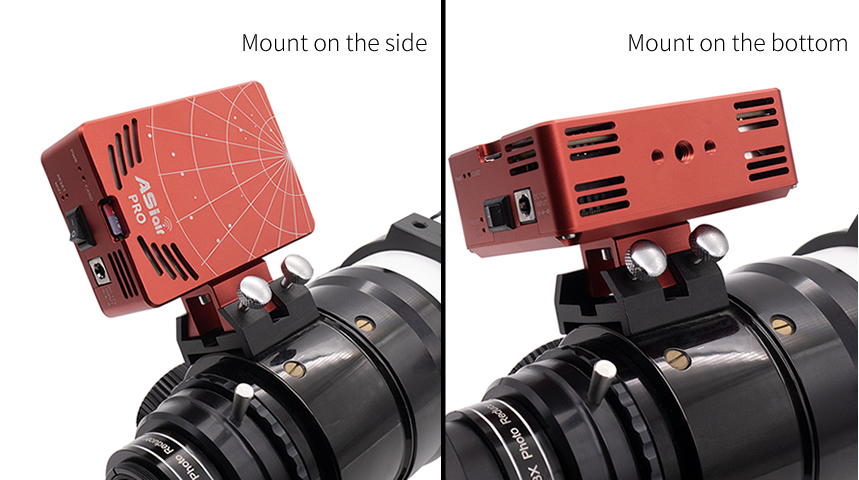 Basically, the software functions of ASIAIR and ASIAIR PRO are the same. However, ASIAIR PRO got many new features with it like live stacking. Also, the ASIAIR PRO can work with new camera like ASI6200MM/MC Pro, while ASIAIR can not.

Above are the ten main changes in ASIAIR PRO.

We’ve got some users asking if ASIAIR PRO still supports all DSLR cameras and equatorial mounts that ASIAIR used to support. The answer is yes. ASIAIR PRO is fully compatible with what ASIAIR has proved to support.

If you have more questions about the comparison of ASIAIR and ASIAIR PRO, feel free to leave a comment below or message us, we will answer ASAP!

87 Responses to ASIAIR PRO: What Changes And Improvement Have Been Made?