ZWO ASIAIR Plus – Is it a worthy successor to ASIAIR PRO?

I always dream to do astrophotography myself in my own backyard but it was proven to be hard as it was very demanding and took a toll on my sleep times (as I am a shift worker). When I was about to quit my good friend, the one that introduced me to astrophotography told me about an amazing device called ASIAIR. I looked into it and bought it and guess what, It is a truly revolutionary device that reignites me with astrophotography again.

Since then I have always used my trusty ASIAIR PRO (2nd generation), this device was always the heart and soul of my astronomy rig. Then one day a new replacement device was announced by ZWO and it’s called ASIAIR Plus (3rd generation). I was skeptical about the ASIAIR Plus and I was thinking about how it can be a worthy replacement for the ASIAIR PRO.

From henceforward I will call both ASIAIR PRO and Plus as PRO and PLus. Well, let’s dive down.

From far away, both of these devices are very hard to set or tell apart besides there is an antenna in one of them. Yes, you heard it right, there is an antenna and yes that antenna belongs to the Plus. In close inspection, you can see there is a size difference between the two. I am also happy that the Plus still has a bolt hole on its side to change the orientation of the finder shoe or put an optional guide scope mount. 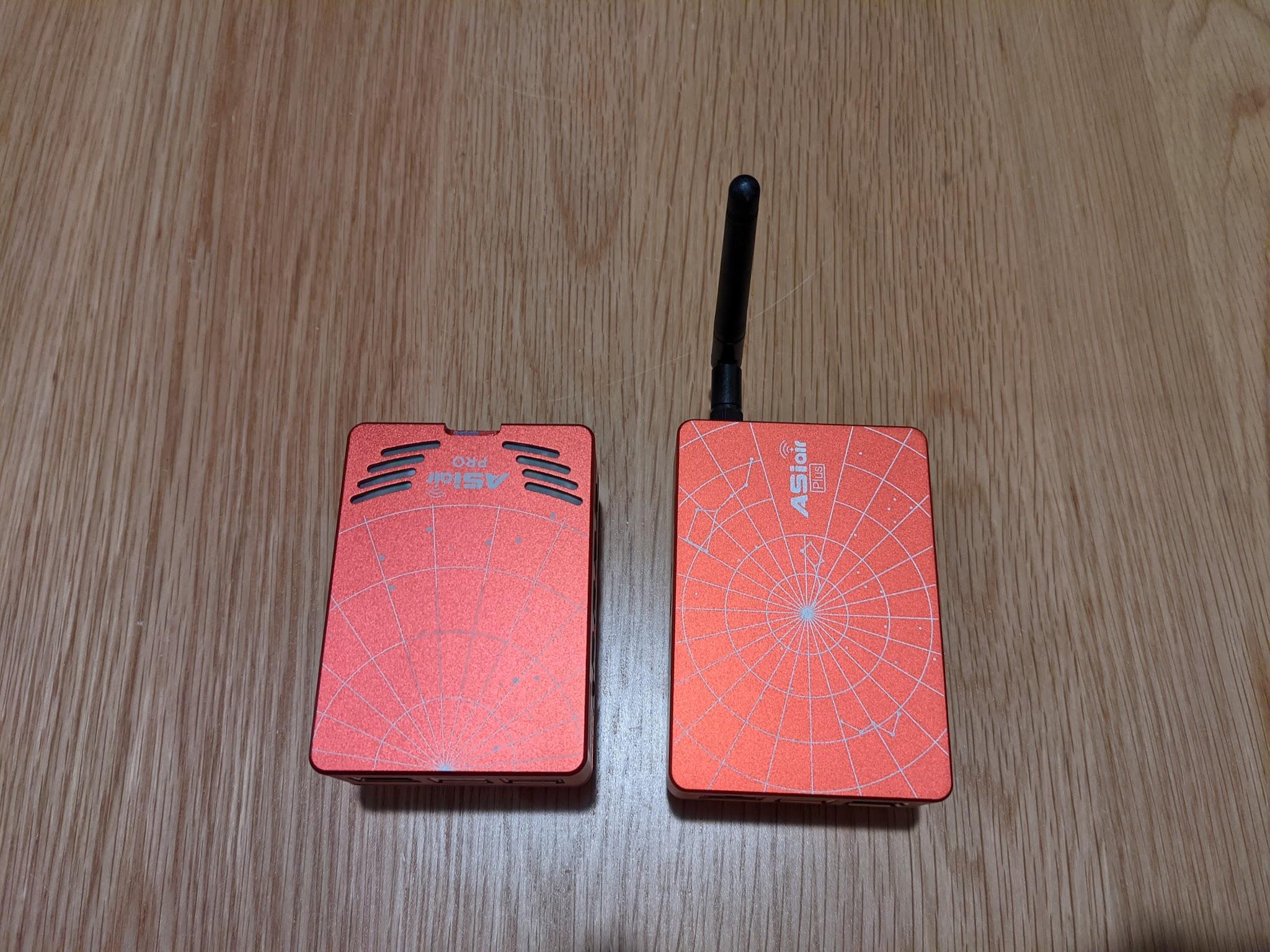 Pic 1. PRO vs Plus Exterior 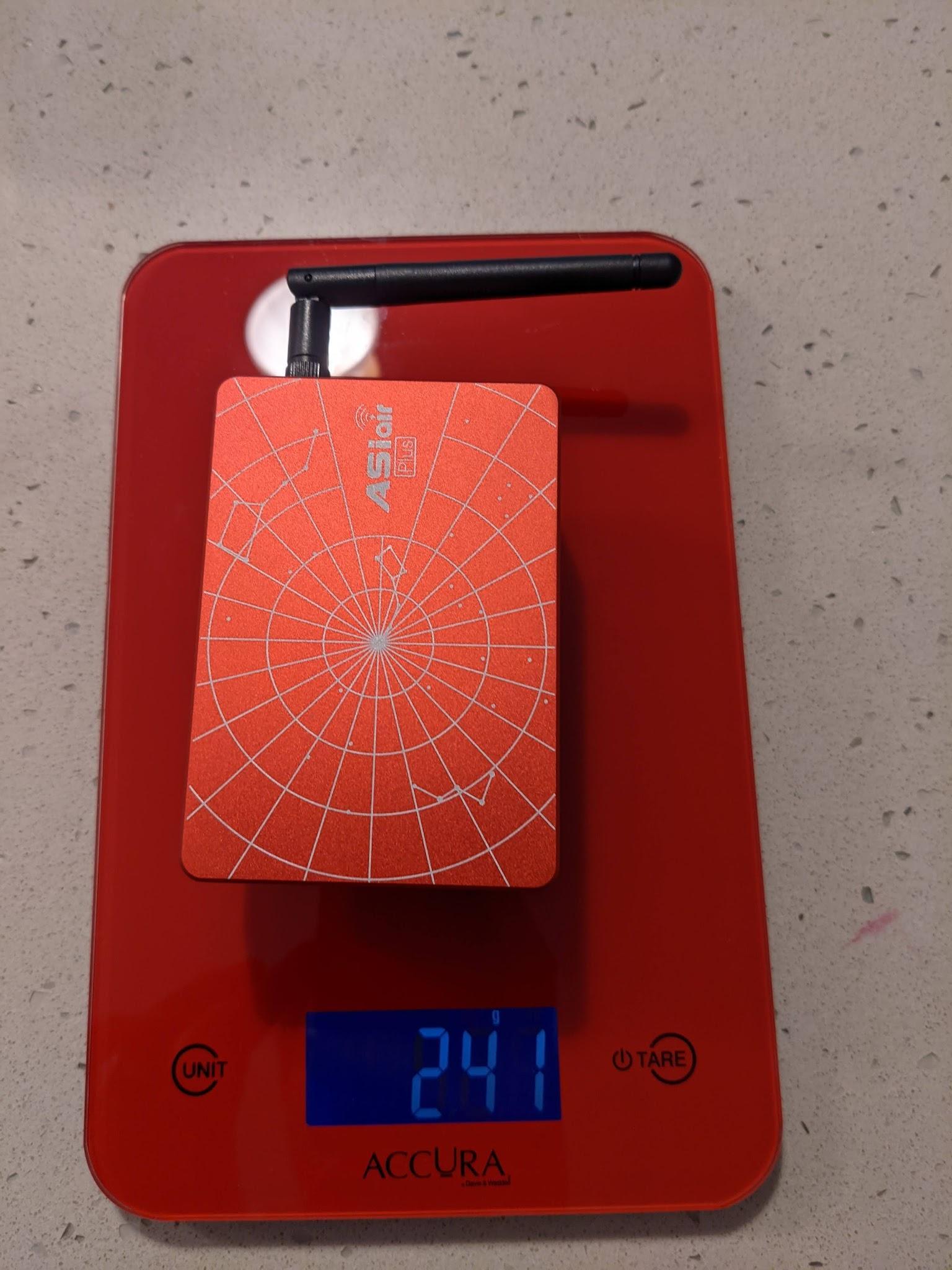 Given the lighter weight of the Plus are is a slight advantage for some users that may push their imaging rig to the mount limits.

Both Air’s has enough I/O port but the Plus has 2 extra slots that may be a game-changer over PRO, in hindsight both AIR has an equal amount of USB’s ports (2x USB 3.0- Blue insert and 2x USB 2.0 – black insert) and an RJ-45 port for ethernet cable, shown in pic 3 below. 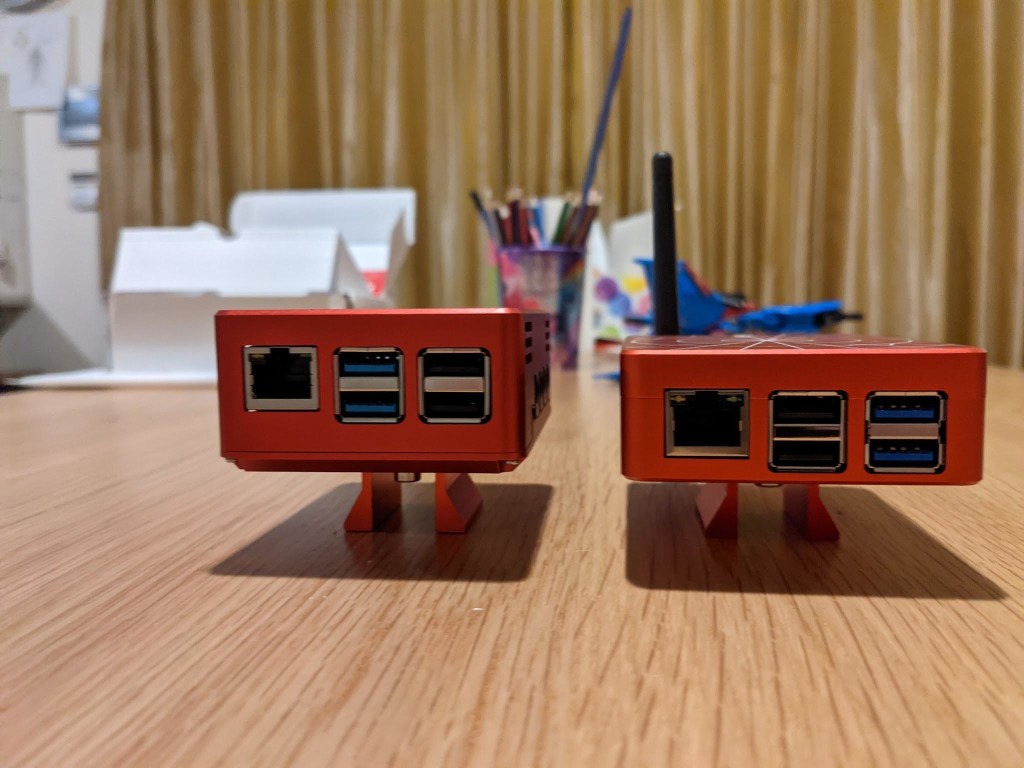 But on the other side, The PRO has nothing but the Plus has an additional two extra ports which are a USB-C port and a Micro SD Slot. 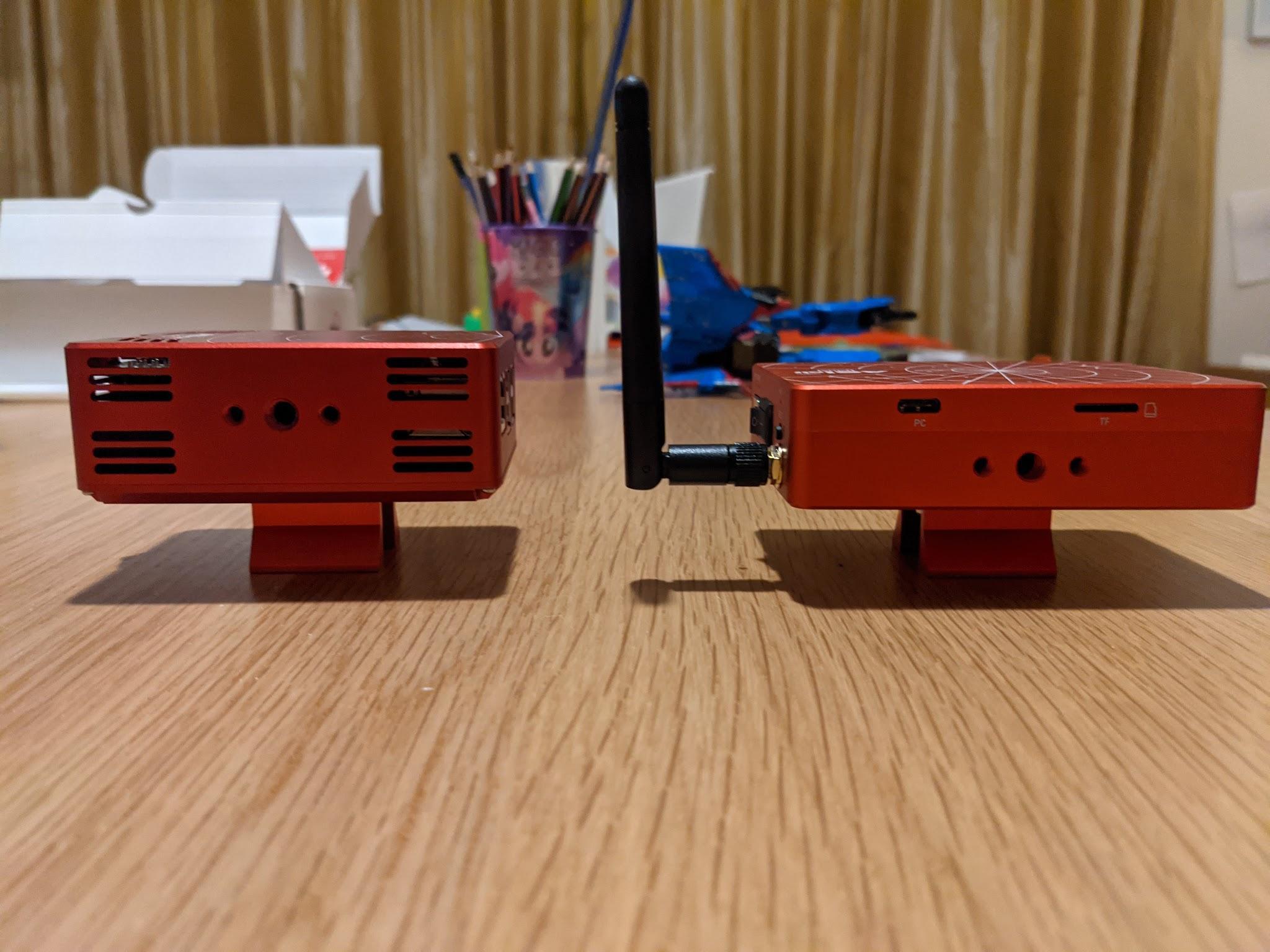 The Micro SD slot in the Plus is used for expandable memory and YES is a FULL STORAGE use, unlike the PRO that uses the micro SD for OS and Storage. So where is the OS image being stored you might ask? On the Plus the OS image is stored in the Plus eMMC which has a capacity of 32GB and is usable at 20GB for storing your Astrophoto or Astro video.

Also due to the OS image stored in eMMC, I don’t have to make a copy and create a backup with another MicroSD card in the event of MicroSD failure that happen in the past with PRO.

I am a fan of USB-C, but I am kinda disappointed as it is only able to be used to transfer files/data from Plus to computer/laptop, and cannot be used to connect USB-C flash drives/harddrive directly. 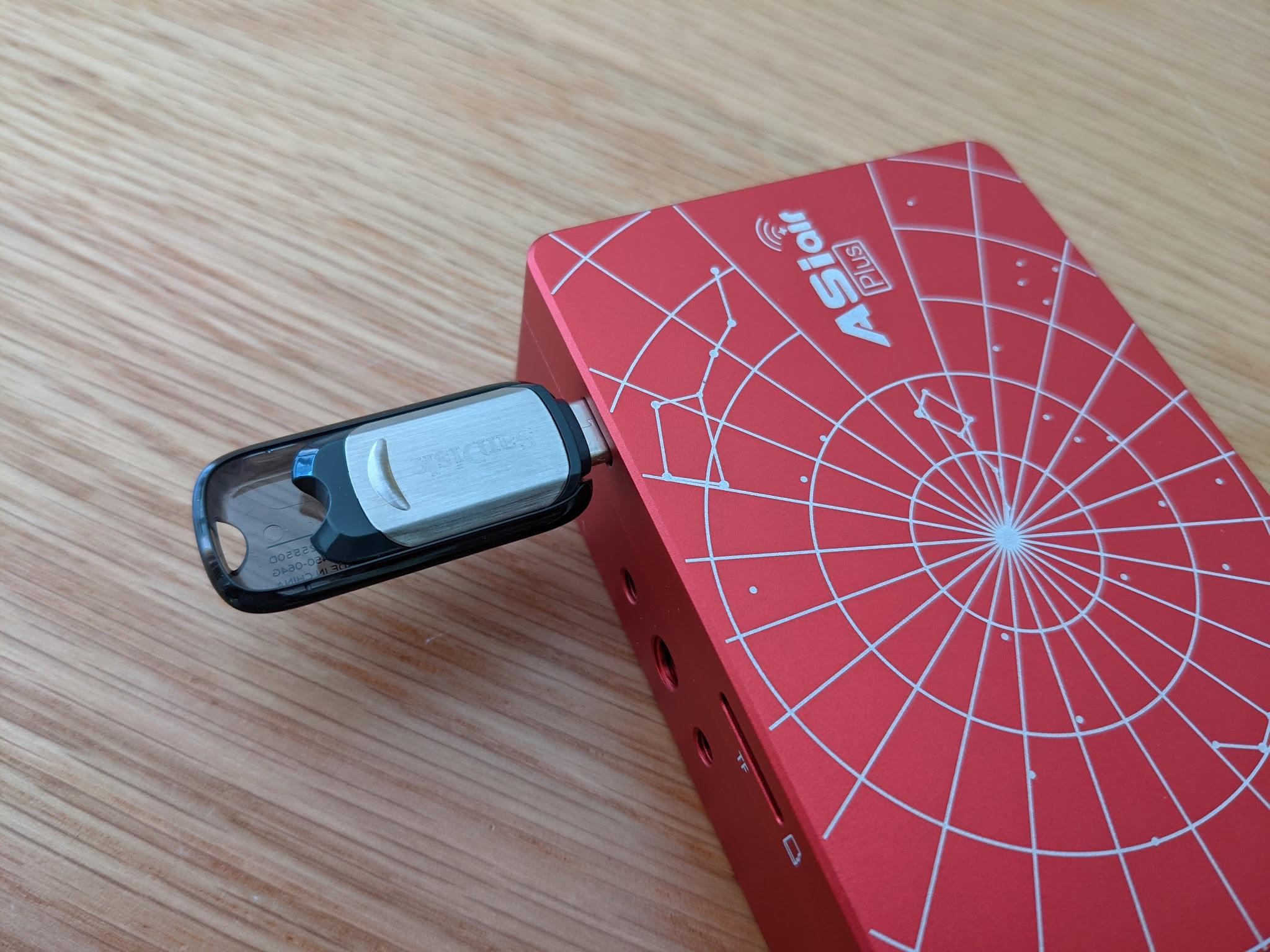 Overall the I/O ports are similar to PRO with just a couple of extra ports that may be beneficial for the user that required a lot of storage memory during their acquisition.

I’m happy to report that both PRO and Plus have an exact amount of 4x 12v / 3A DC output ports with some type of LED light for each output to highlight which ports are active as shown in picture 6 below and also the DSLR snap port still exists in new Plus. 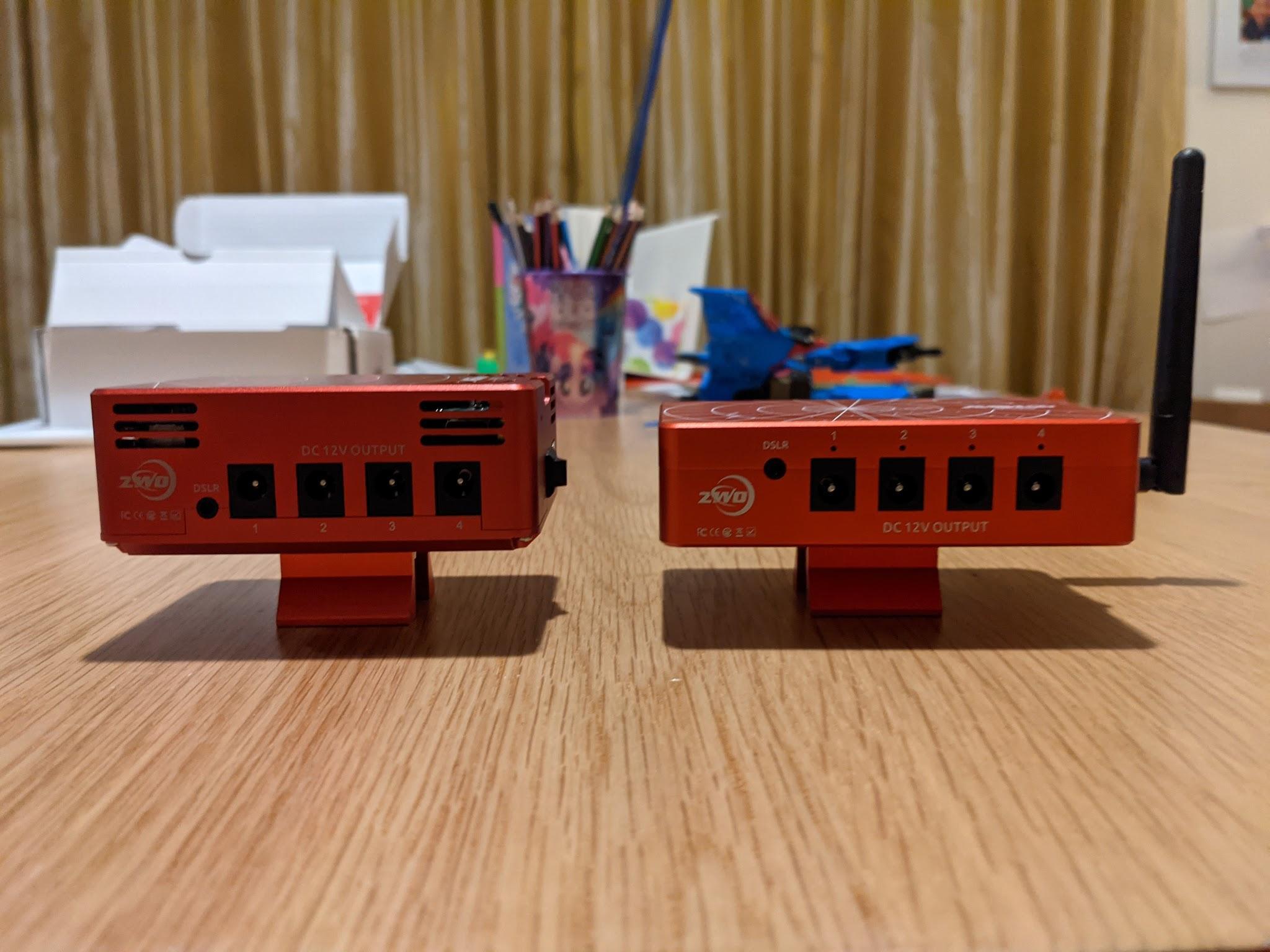 The only difference between these AIR was in the Power input section, Namely a missing Micro SD card slot in Plus as it is being relocated (as we discussed in the I/O Port section), Reset button and WiFi Antenna port. 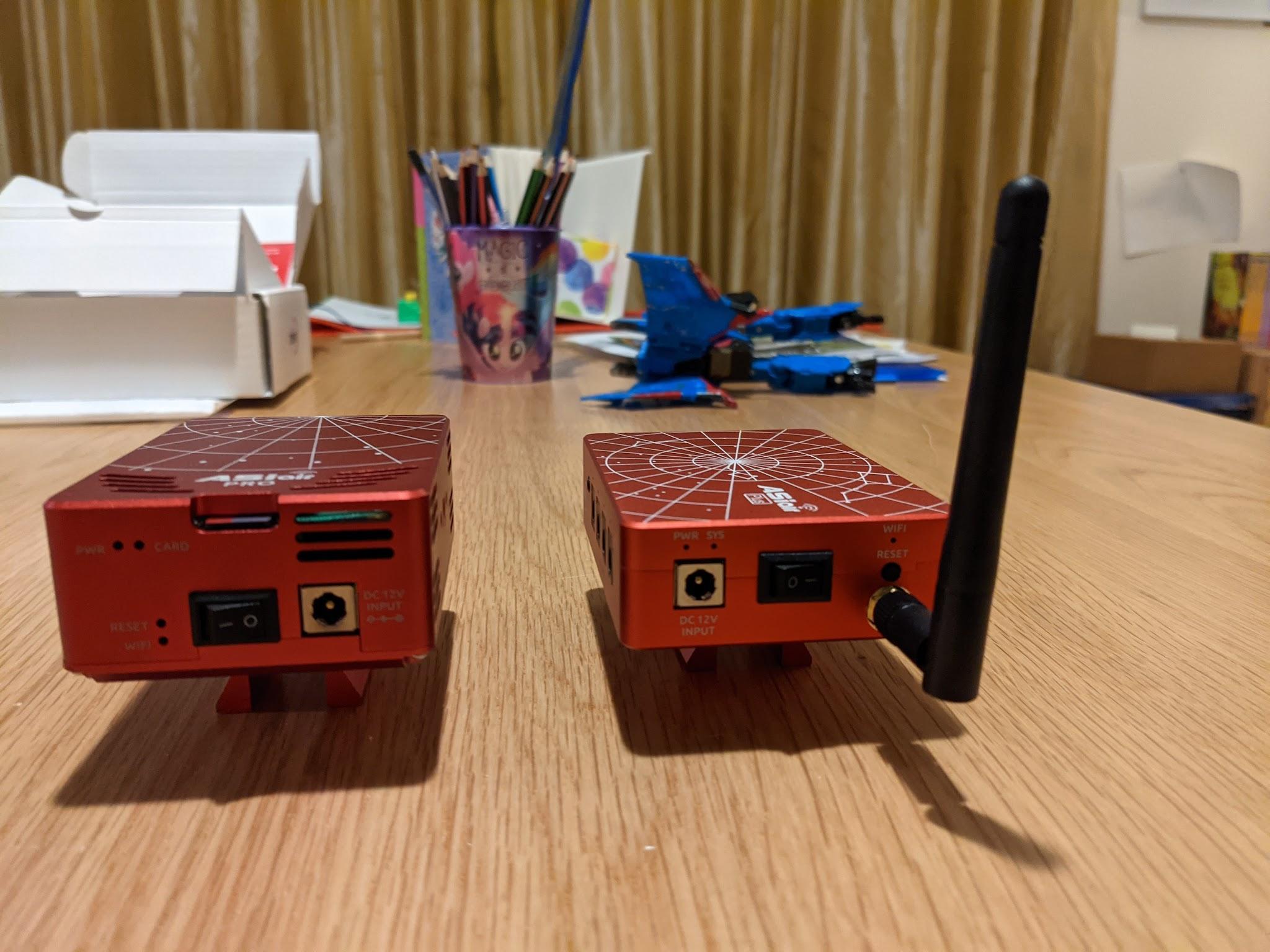 The reset button on the PRO was a pain (or can be a safety feature for some) as when the PRO was developing a problem that required to be reset, I need to find a SIM ejector pin/needle to reset it. As in Plus there is a button now, just hold the button over 5-10 seconds with the power ON and it reset. 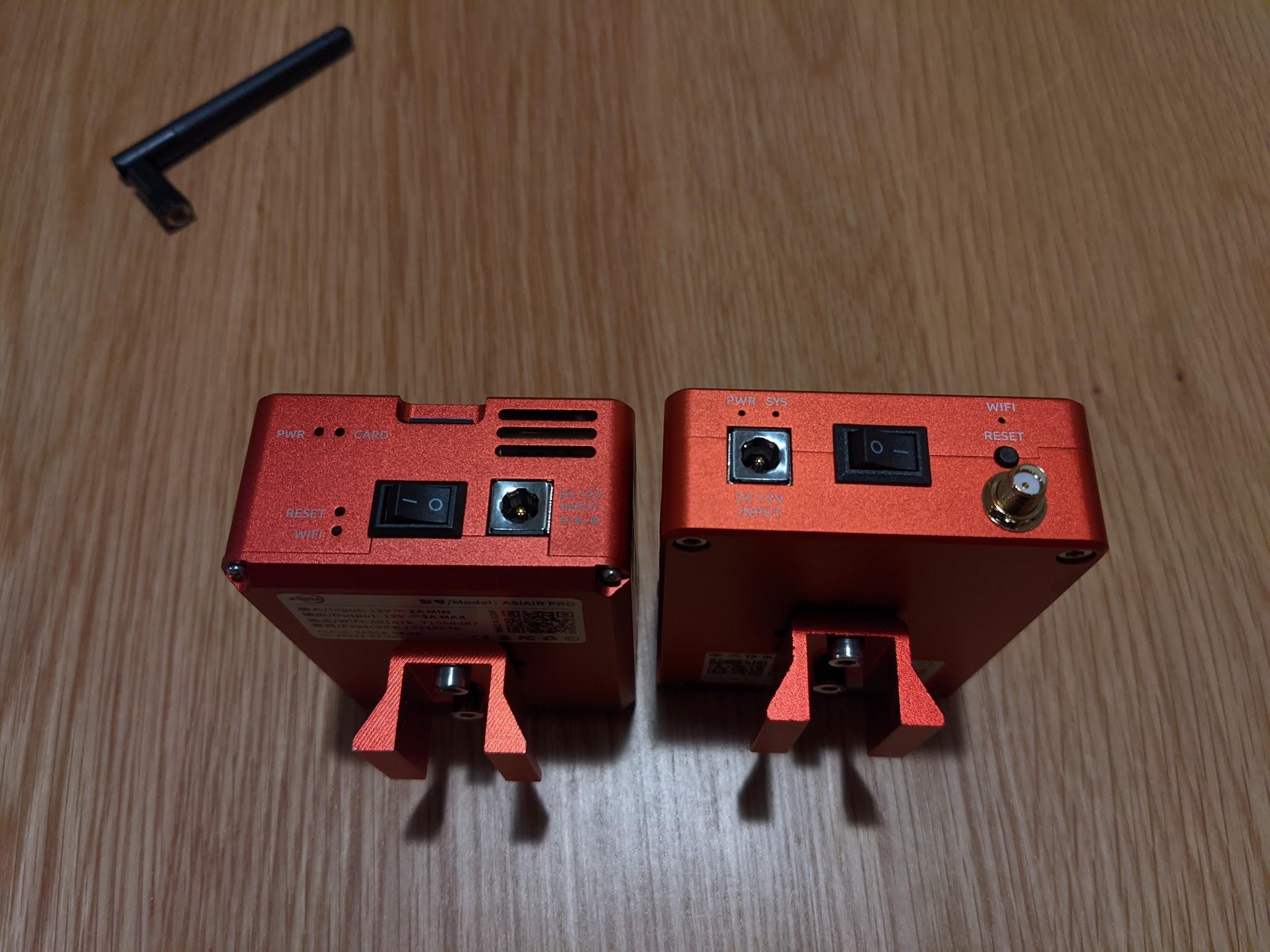 The Plus grows an Antenna now (as discussed in the Aesthetics section), which means it has better wireless coverage over the PRO, During my test indoor, I found that the signal coverage was sufficient for me. At 2.4GHz I manage to still connect to Plus over 15-17m away and at 5GHz I manage around 8-12m away before has reconnection issues. As for the antenna port, I’ll discuss it in the “How can it be better?” section.

So far the Plus is ticking the right box for me in terms of power port and ease of use.

The software in both AIR is basically the same with some features that are exclusive to Plus. the PRO software is already excellent but in Plus that same software becomes slightly better. Therefore I’m not diving down to the detail of what the software can do, but I’ll highlight the difference.

In Plus there is REAL-TIME monitoring that can monitor Voltage (Input/output), Power Consumption and the CPU temperature, and also on port DC port activated it also show how much voltage and current is drawn from the power source as shown below in pic 10 and 11, this is GOLD information as it can help me to determine if the equipment that I use at that time is Undervoltage or not enough currents.

Secondly, Since Plus is using eMMC, and at the time of my testing, the Plus is running version 8.48 and I found a function in the ASIAIR apps that can make the Plus Firmware revert back to the old version if anything wrong. This is a good feature for me as that alleviates when the Plus has a massive Firmware problem which I hope that personally won’t be encounter ever.

In terms of software used, The Plus’s REAL-TIME monitor is a bonus as I do rely on the information coming from the battery box that gave me the same information. But with Plus that information can be access remotely rather than physical look at the battery box. As for the firmware reset function is a nice touch from ZWO, but I hope I never use it.

How can it be better?

Now the negatives of the Plus based on my own opinion that ZWO can or may improve in a future iteration of ASIAIR, I start from design, Power port, and lastly Software. 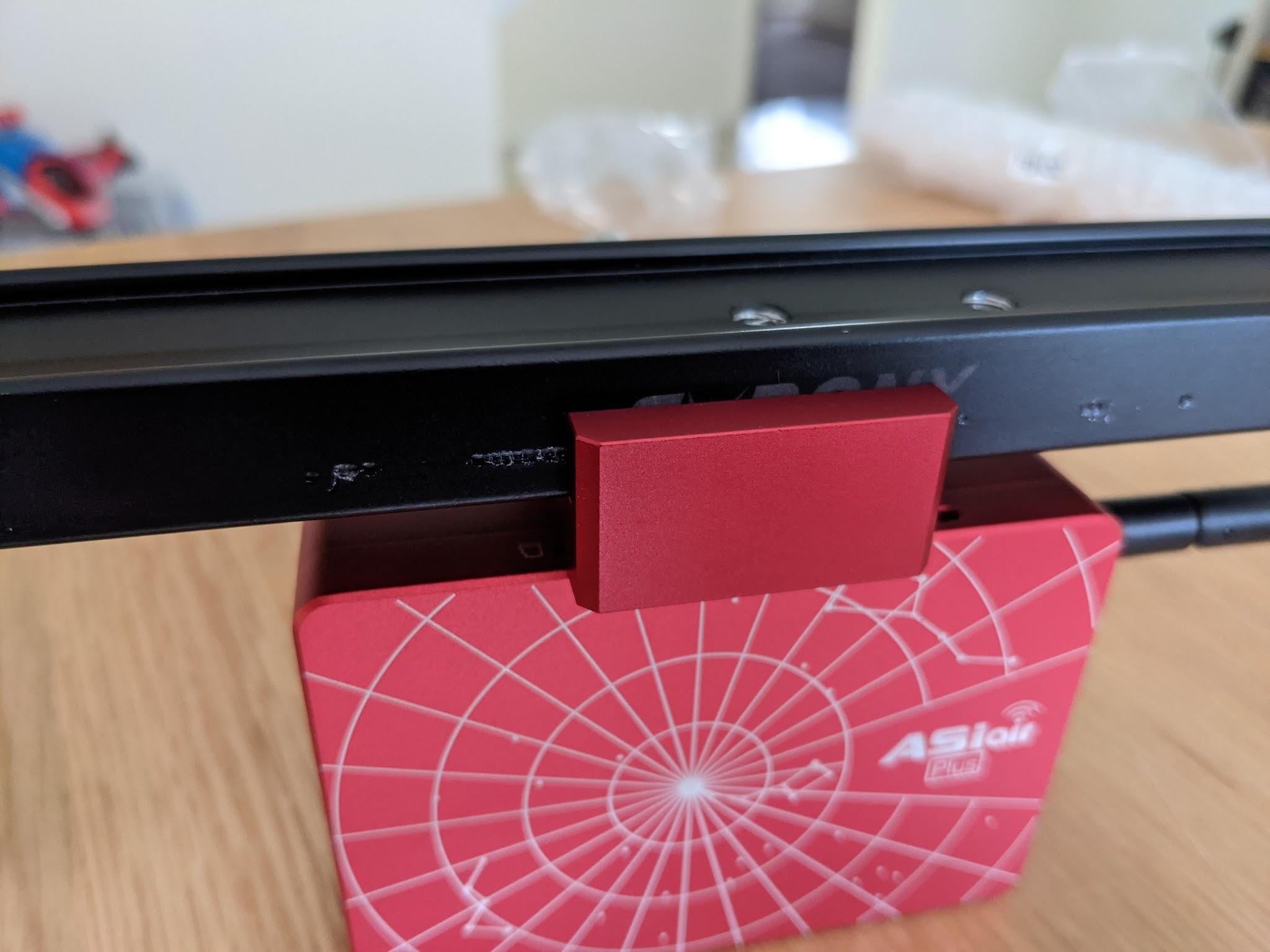 I wish that the Power port has a dedicated RCA jack for the dew heater, Yes it feels that I’m nitpicking on Plus but if I can choose which port I can remove, I will choose the USB-C port at this stage as I felt this serve no purpose other than file transfer. So to utilize the dew heater that I have, I had to use an optional DC to RCA cable. 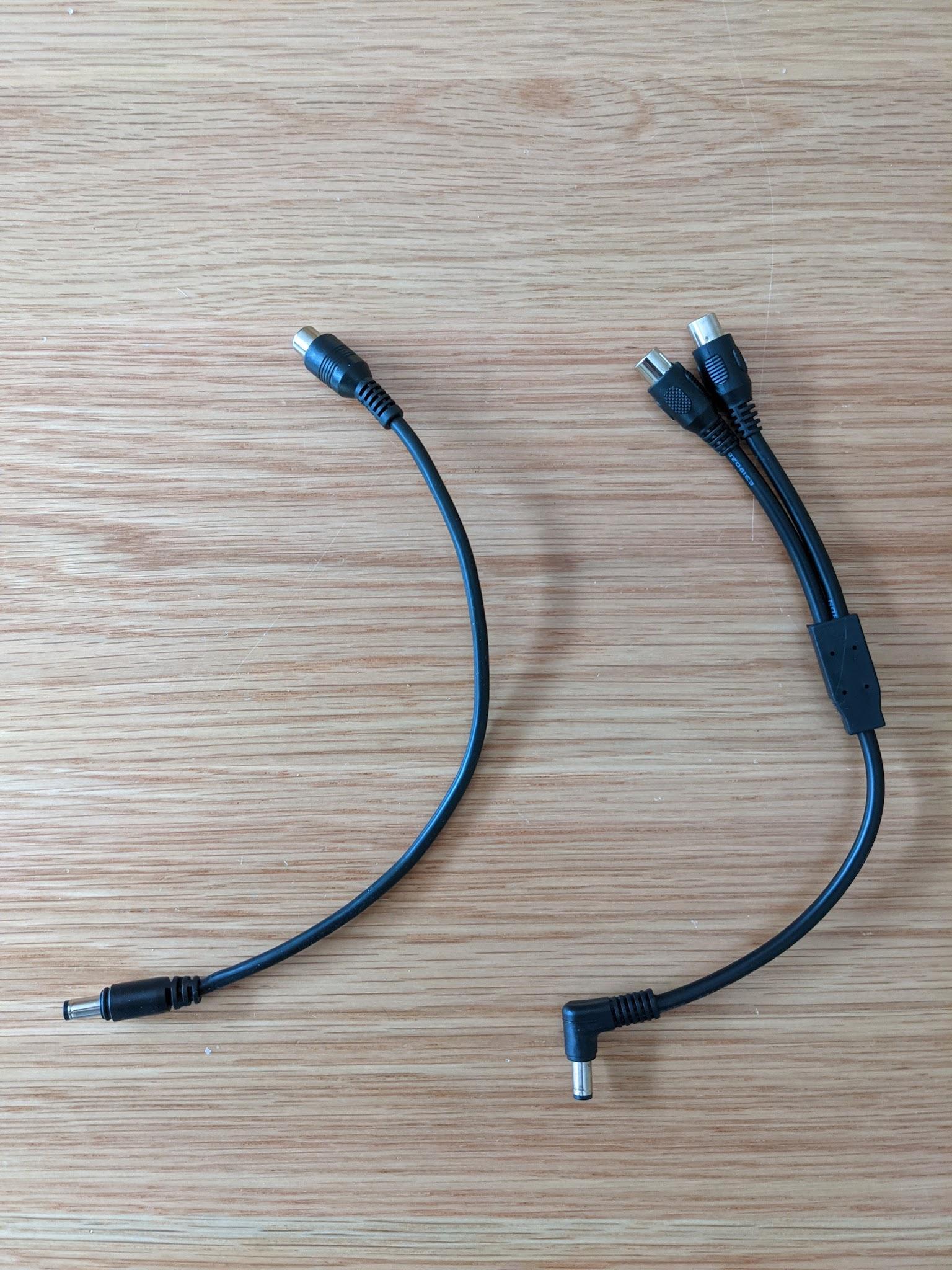 As I mention above the USB-C at this stage are only able to be used for file transfer between Plus and computer, In my opinion, it will serve a better use if it’s able to be used with USB-C flash drive/hard drive, I hope this is just a firmware fix rather than hardware capabilities of CM4.

I wish the Plus can capture video as.SER format addition to .MP4 and .AVI, I think this can be deployed with a firmware fix. Next software fix for plans may be required as the current Firmware in Plus still cannot do multiple plans, at this stage, I just get around it by setting up one plan to shooting random targets in between their target until the “REAL” target is their view and also there is no way to do TEMP set in the beginning of starting the Plan.

Lastly also found that the Plus is using SMA female input for the Wireless Antenna jack and SMA male output for its antenna, this setup is not a common setup, so be careful when ordering a replacement antenna when it broke. 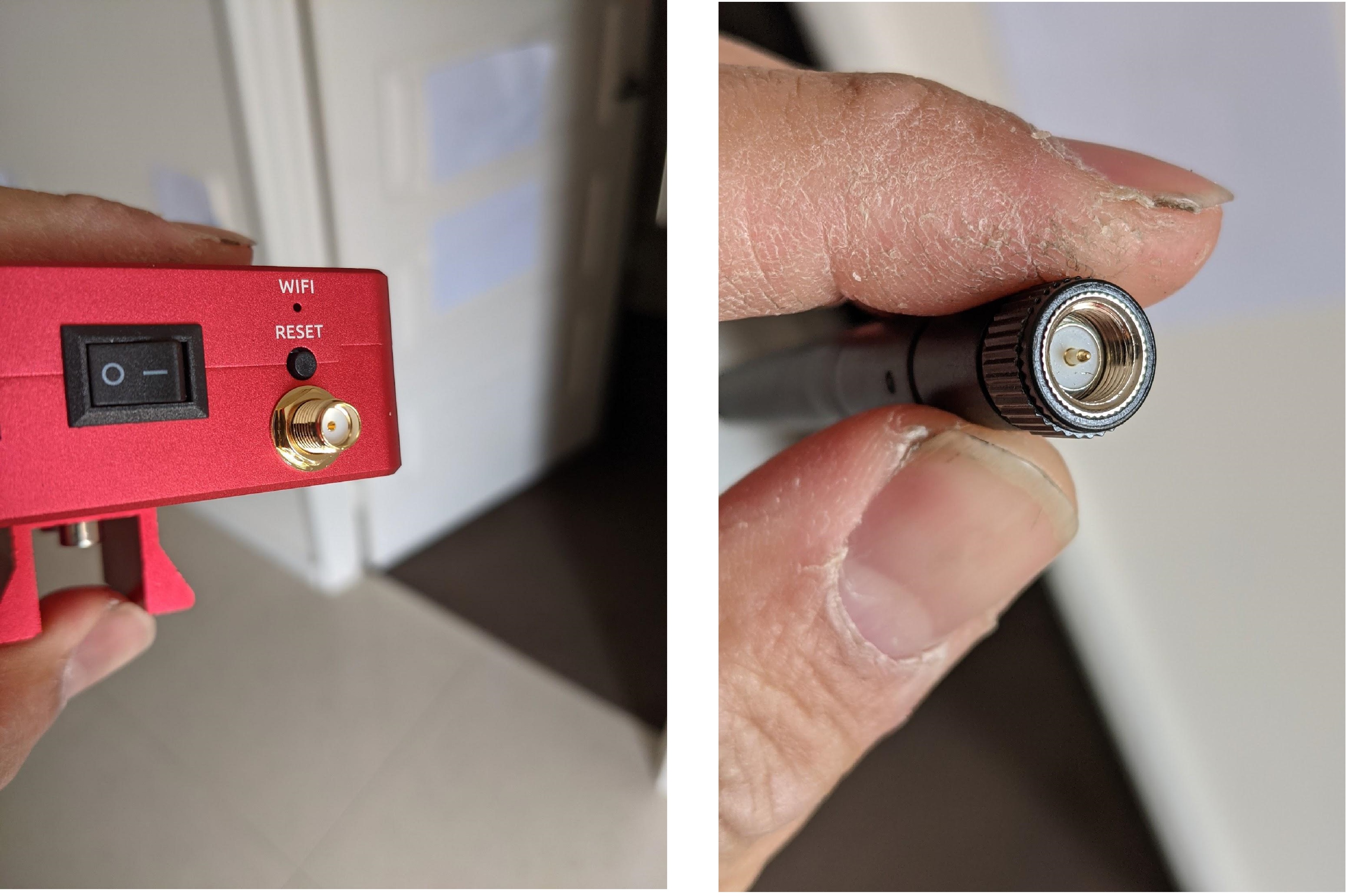 What’s the big fuss about? Do you recommend it?

What most users of the PRO complain about are the dreadful WiFi signal and the reliability of the Micro SD card that is always corrupt. In Plus those issues are being addressed and also ZWO doesn’t stop there it makes the air lighter weight and faster. Also, there is the latest and greatest factor of Plus that may be useful in future software/firmware release.

For me, The Plus is a slight jump of the PRO, the only thing that makes it stand up is REAL-TIME monitoring, other than that is about the same as a PRO, YES performance is slightly faster (I/O). Would I recommend it? Well, it depends on what devices do you have. If you using ASIAIR v1, The Plus is definitely for you no doubt.

If you are using PRO and happy with its quirks then this device maybe not be for you. But if you hate that WiFI / micro SD issues then this device is for you. So back to the question in my title is ASIAIR Plus is a worthy replacement to my PRO the answer is a resounding YES with a caveat.

ASIAIR Plus 12v DC port has enough oomph to power ur dew heater to heat water in the cup for your coffee in dark site (ps: it’s gonna be a long wait but worthed). 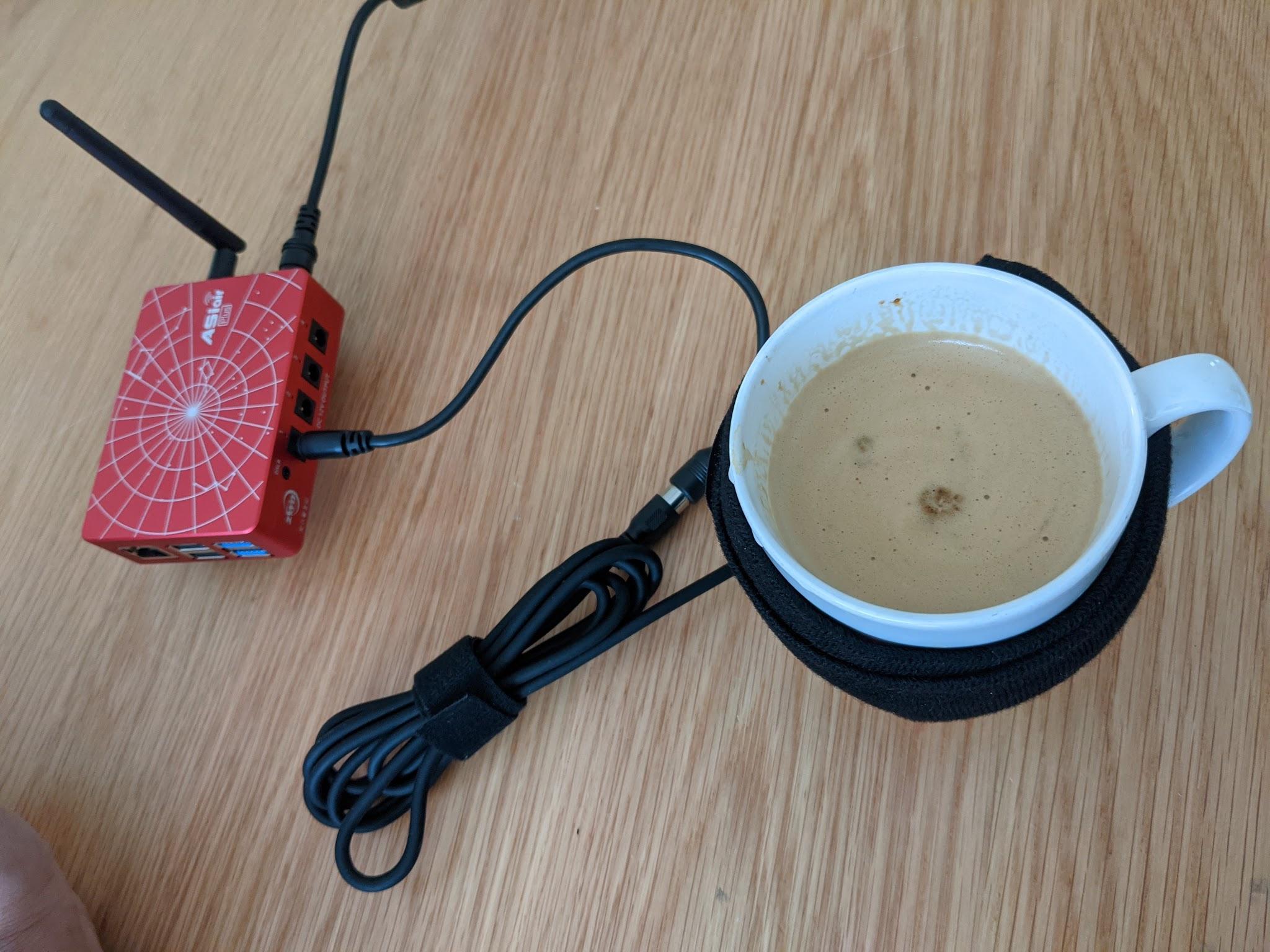 6 Responses to ZWO ASIAIR Plus – Is it a worthy successor to ASIAIR PRO?