ZWO ASIAIR Plus – More than getting inside out of the cold 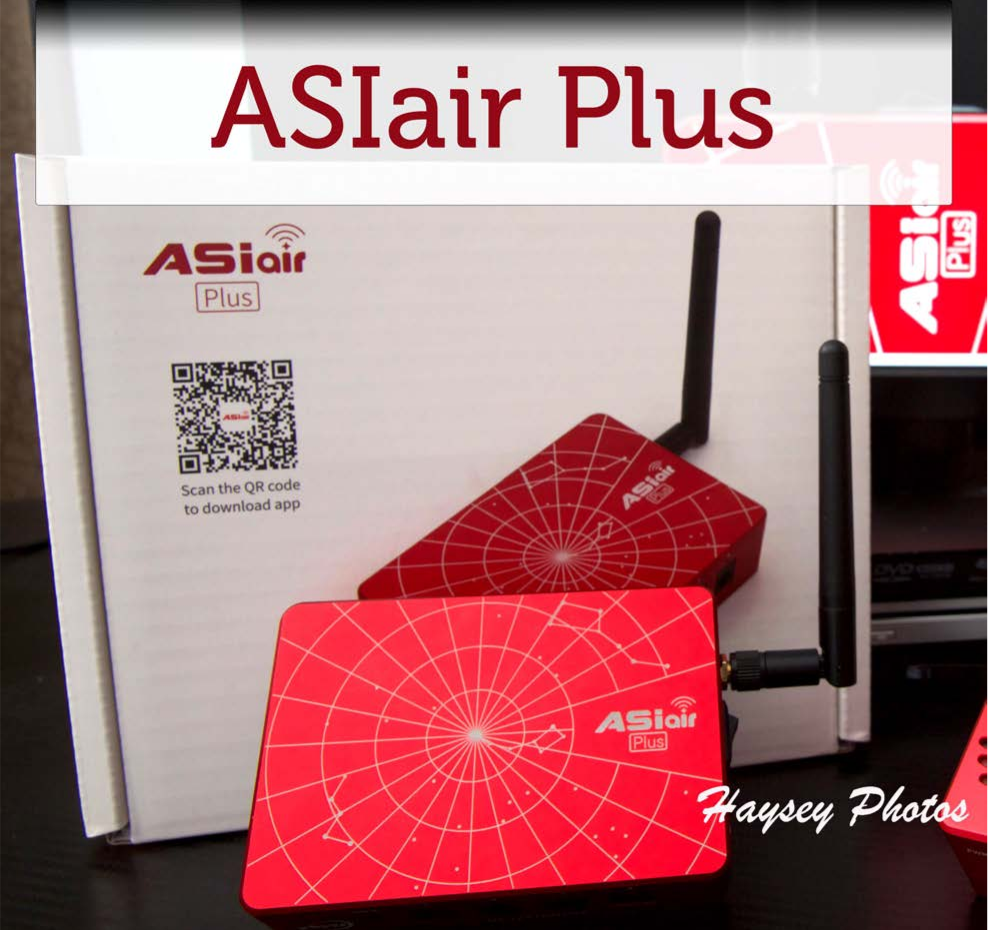 Firstly, I must admit to being still relatively new to the Astrophotography hobby having only really gotten serious about it in late January 2021. This is when I finally received my new Celestron AVX Mount and ZWO ASI294MC Pro camera, ZWO ASI290MM Mini guide camera along with a new William Optics GT 71 scope and WO 50mm Guide Scope. I still have lots to learn but feel I am definitely improving.

One tool I added a couple of months ago was the ASIAIR PRO. Before this device, I had an old MacBook and was running my setup and captures etc. using KStars / EKOS. This worked OK but this meant having to manage more cables, (USB cables from the MacBook to the cameras, power cables, etc.) having to leave the MacBook outside with the setup and having to find power for the MacBook. In general, it added much more work to the cable management and making sure nothing was getting snagged and potentially damaging all my expensive equipment.

I’d had my eye on the ASIAIR PRO for some months before actually purchasing. The things that drew me to it were the power management onboard the device, its small lightweight and compact size, making it easier to mount with the rest of my equipment, it was wireless and I could run everything on my iPad Pro from inside the home over my home wireless network. The Polar Alignment tool looked easy, especially as I could never get the Polar Alignment tool in EKOS to work, this was another benefit for me.

In July I took the plunge and ordered the ASIAIR PRO. On the first night of use, I was extremely pleased with how easy it was to set up and get going. There were now far fewer cables to worry about, and using the iPad to control the mount and run the entire session was a breeze. Once set up and polar aligned, one could retreat to the warmth of the home and keep an eye on everything via the home WiFi network.

The only real complaint I did have was the need to purchase an extra WiFi extender to place outside under a cover to improve the WiFi connectivity. The metal case of the PRO reduces the WiFi range and with no external antenna, the WiFi extender fixed the issues for me. Just a few weeks after receiving my ASIAIR PRO, as is always the way with technology, I noticed ZWO had announced a new version, the ASIAIR Plus. Oh well, I had the Pro and it was working great for me. 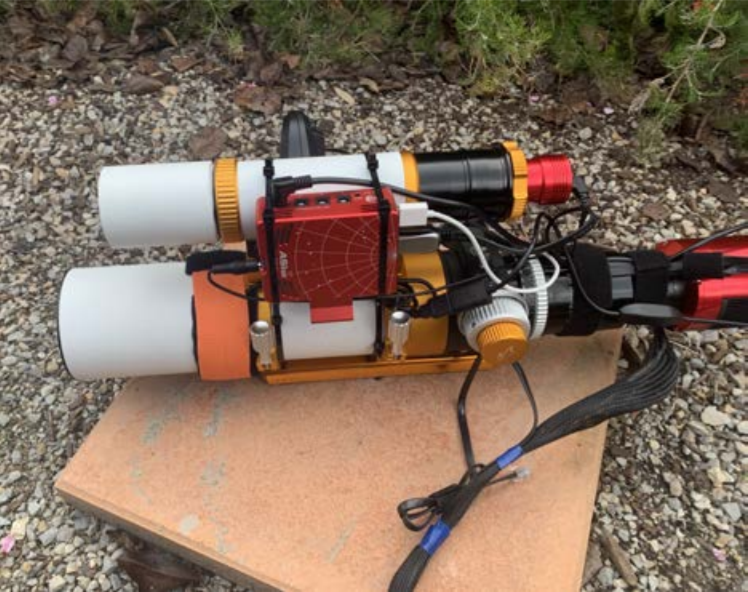 ASIAIR Mounted to WO GT 71 Scope

Then I noticed ZWO were asking for volunteers to be ASIAIR Plus Experience Officers to assist with testing and using the new model. In turn, this would assist with development and ironing out any issues and added bonus of getting one in our hands well before the original shipping date of November!

Having never really done reviews on Astro products before and still fairly new to the hobby, I nervously volunteered. I was very excited and humbled when they let me know I had been accepted into the program. 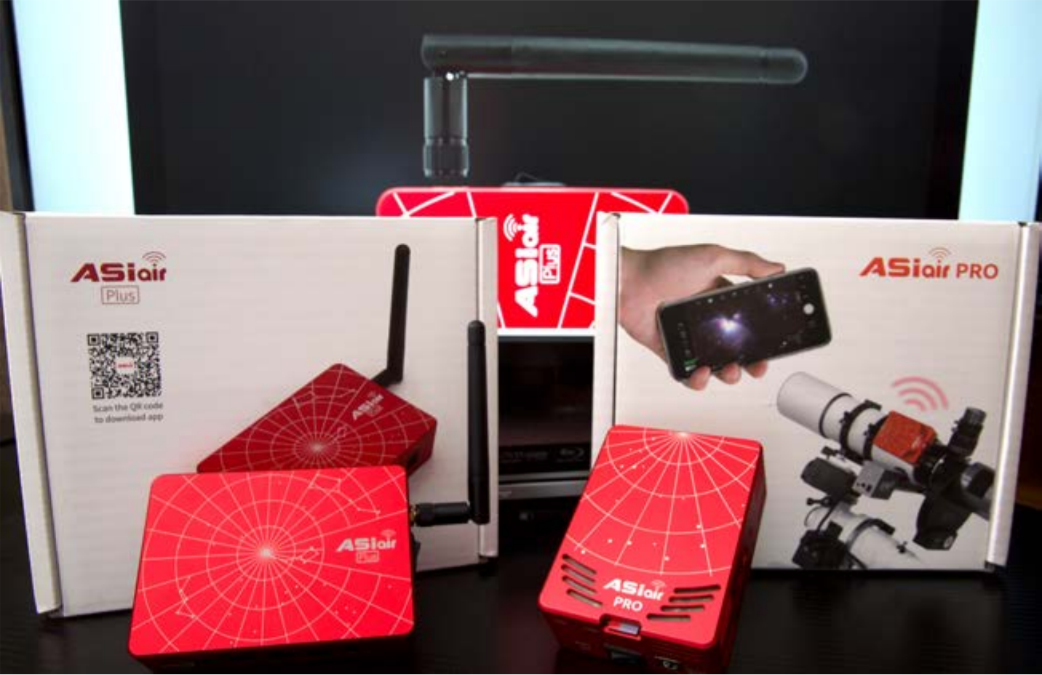 Thank you ZWO for letting me be part of the team.

In Melbourne Australia, we have been in lockdown for a few months due to COVID and I thought I’d get plenty of time to test the unit, but on arrival, queue the weather gods, and we ended up having one of our wettest end to winter and start to spring in a decade. Oh well.

One of the first things to do with the unit, was to register the device via the online registration system via either the QR code or online setup, etc. using the ASIAIR app on my iPad Pro, a first generation iPad Pro. I noted that some people had been having difficulties with this but following the instructions ZWO provided it worked exactly as written for me and the process was seamless and straight forward. The app advised there was a firmware update to be done for the new version which I accepted. It took just a few seconds to complete and in just a couple of short minutes was connecting the Plus to my home WiFi network. Overall I found this to be a simple and easy process.

The next thing I was really pleased with, (once we did get outside due to some nicer weather) was that the Plus has the addition of an external Dual Band (2.4Ghz/5Ghz) WiFi antenna, which gives ASIAIR Mounted to WO GT 71 Scope ASIAIR Plus and ASIAIR PRO side by side the WiFi much better range than the PRO unit. This saw an overall better speed connection on my home WiFi 2.4Ghz network. The download times for images from the device to the iPad were better. ZWO advise the range is now up to 20 meters, but at this stage, I am well inside that and have not had any connection issues. Overall this is a big improvement on the PRO.

What also helps with download times is that the Plus now has eMMC at its heart. For those that are into the tech specs, the term eMMC is short for “embedded Multi-Media Card” and refers to a package consisting of both flash memory and a flash memory controller integrated on the same silicon die. For the rest of us, this means the software that controls the Plus and the media storage device, is integrated into the one chip. This is a 32Gb eMMC chip which after the OS of the Plus leaves approximately 20GB of storage for your images. This eliminates the need for both a USB stick for storage of images and Micro SD card for the operating system, as is the case with the PRO. Another big advantage over the PRO is you no longer have any issues with needing to backup the SD card for the system as the Plus has a Reset Firmware and Auto Recovery capability. Hence the new small Reset button underneath on one the end of the Plus. (See image at right) Not to mention 85Mb/s read speed and 52Mb/s Write speed.

Despite taking longer to start up than the PRO, (around 30 secs vs 16 secs) the benefits kick in once the Plus is started up and running with improved performance all around. 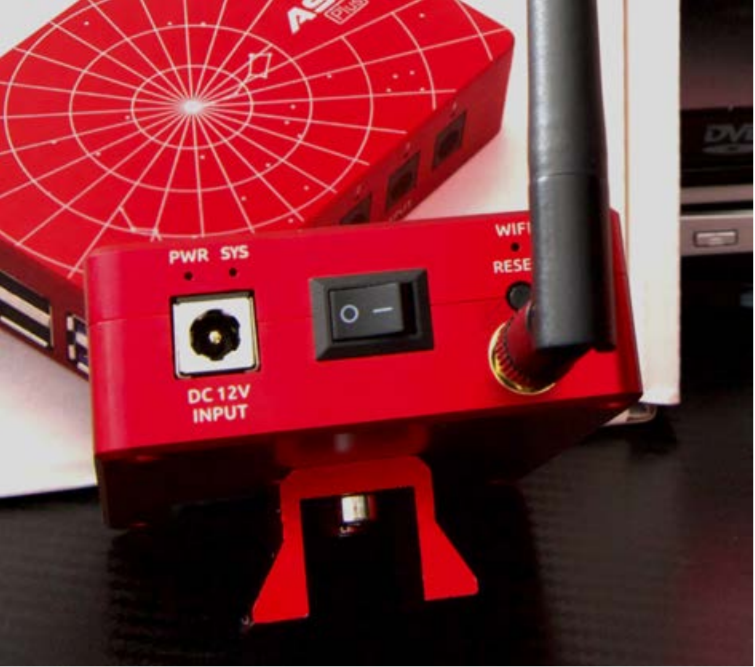 The good news is the Plus still has both a Micro SD card slot and sports a handy USB C connector. You can either choose to use a Micro SD card for your storage or the eMMC. When it comes to transferring images you can plug in your PC or Mac via the *USB C to transfer files from both the eMMC and the Micro SD card as well. From my experience, it is extremely quick and easy with my new M1 MacBook Pro.

As per the PRO, the Plus still has 4 USB ports, (2 USB 3.0 and two USB 2.0) and a Gigabit Ethernet port if you like to plug into your network via ethernet cable.

Like the PRO, the Plus has 4 x 12v DC Power Supply ports, and a 3.5mm connector for your DSLR’s if you don’t have a dedicated ZWO Astro camera. (Compatible with a range of Nikon and Canon DSLR’s, check ZWO website for a compatibility list and cables required.) 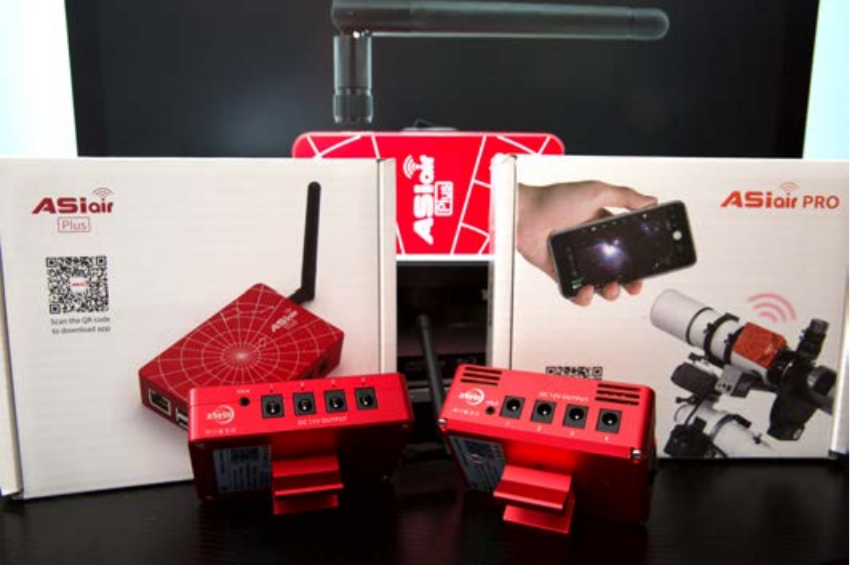 I have to say I love the 4 onboard power supply ports on the ASIAIR. This has eliminated several cables for me and made cable management so much easier. I now have a single loom that has one power cable and a single USB cable. Fewer snags, fewer tripping hazards, etc. Powering the cameras and dew heaters all from the Plus makes the cables easy to bundle and means one less device is needed to get powered up and running.

The new ASIAIR app now also includes an improved Realtime Monitoring system which not only allows you to turn the power supply ports on or off but also control the amount of power on each port. This also gives you information on the status of the WiFi connection, the CPU temperature and information on the status of the current power Input Voltage, Input Current and Total Power. One thing I noted between the ASIAIR PRO and Plus, was with the PRO, when I turned down the power percentage going to my dew heater from 100%, the PRO would start making a reasonably loud whining noise until I turned back up to 100% power. In the middle of a dark cold night in a quiet neighbourhood this can be a bit annoying. I am pleased to report this is very much reduced on the Plus and is almost undetectable. 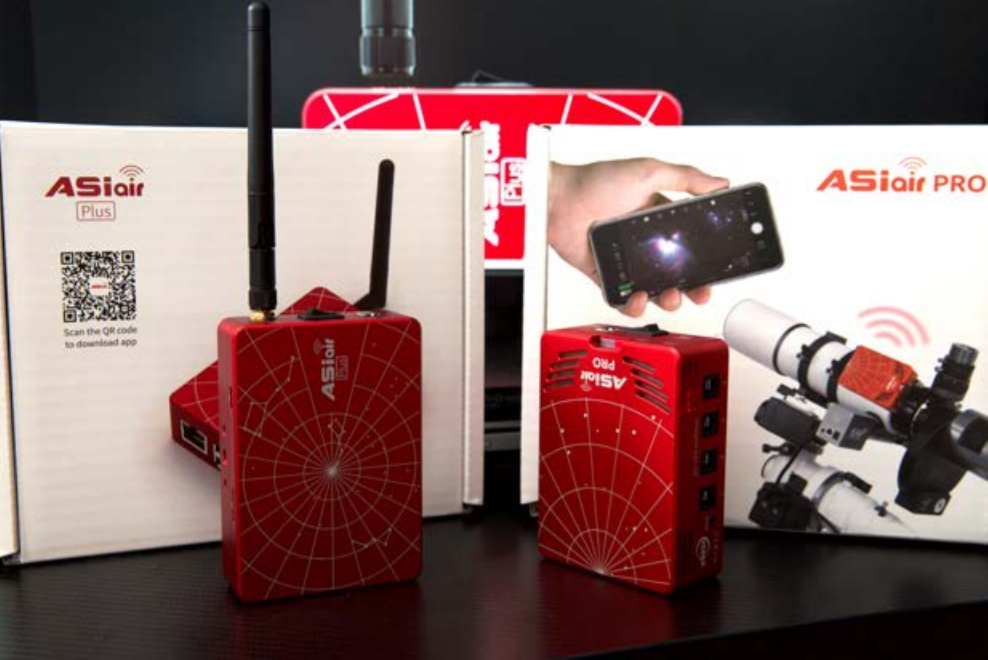 Auto Guiding for me has been super reliable and on most occasions I get it running well under 1.0 with some nights as low as .3 to .5 regularly.

Taking calibration frames is a snap, especially with flats as the app works out the optimum exposure for you automatically.

The Polar Alignment tool is easy and Plate Solving is super quick too.

My favourite things about the ASIAIR Plus are;

– Very easy to set up and use.

– Wireless connectivity so you can get inside out of the cold!

– For a relative beginner it has made my Astrophotography easier to set up and get imaging, but still powerful enough to take great images and gives me more time to take images.

The ASIAIR app on my iPad is truely super easy to use and understand software. Yes, a little bit of a learning curve and I am still learning things about it as we write this, but overall getting up and running was a breeze, from night one.

I personally highly recommend the ASIAIR Plus to anyone who wants to make their Astrophotography hobby easier and more fun as it has done for me. 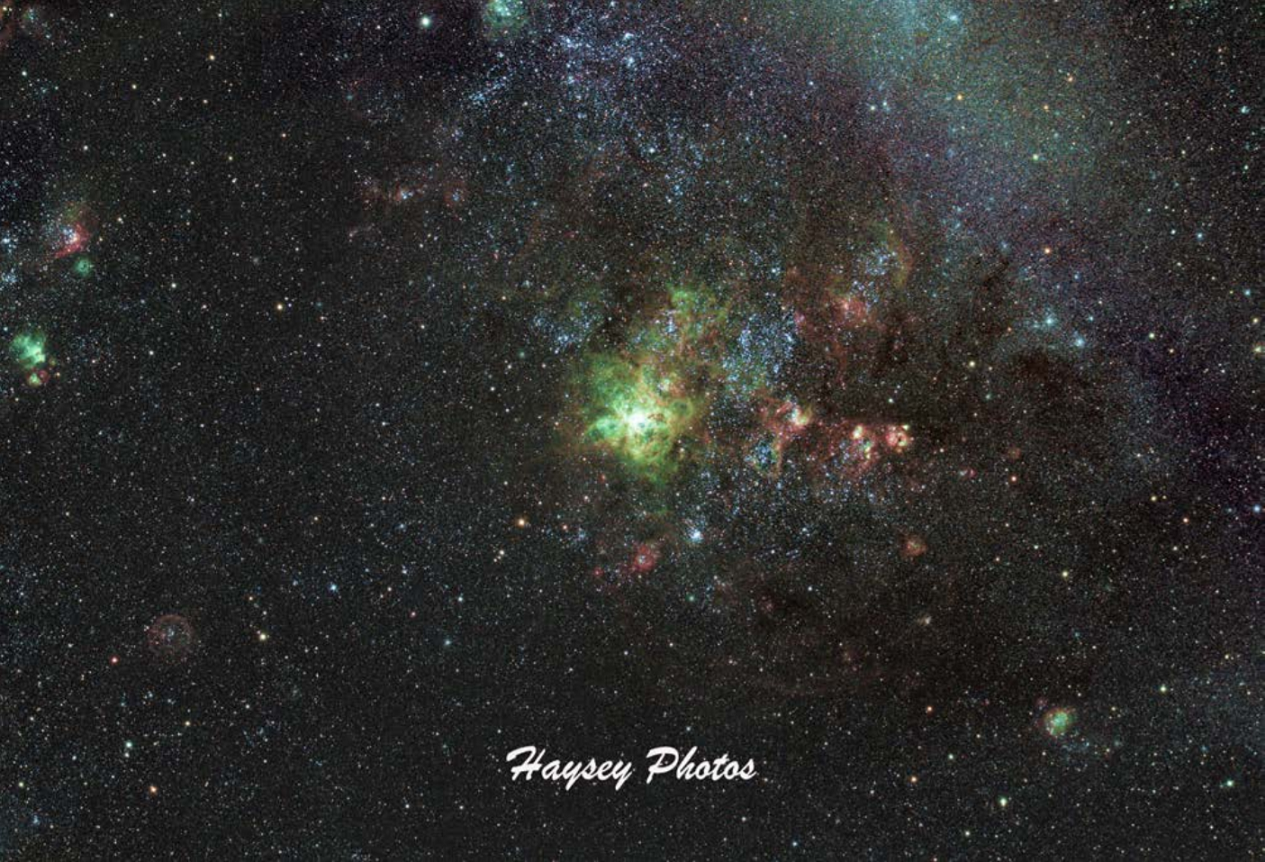