Hi, my name is Amrinder Singh. I am originally from India but have been living in California for almost 20 years with my wife Sharan, daughter Jindh and our German Shepard dog Leo. I enjoy photography, hikes and travel. We’ve traveled to 5 continents so far and plan to cover the remaining two soon as well. 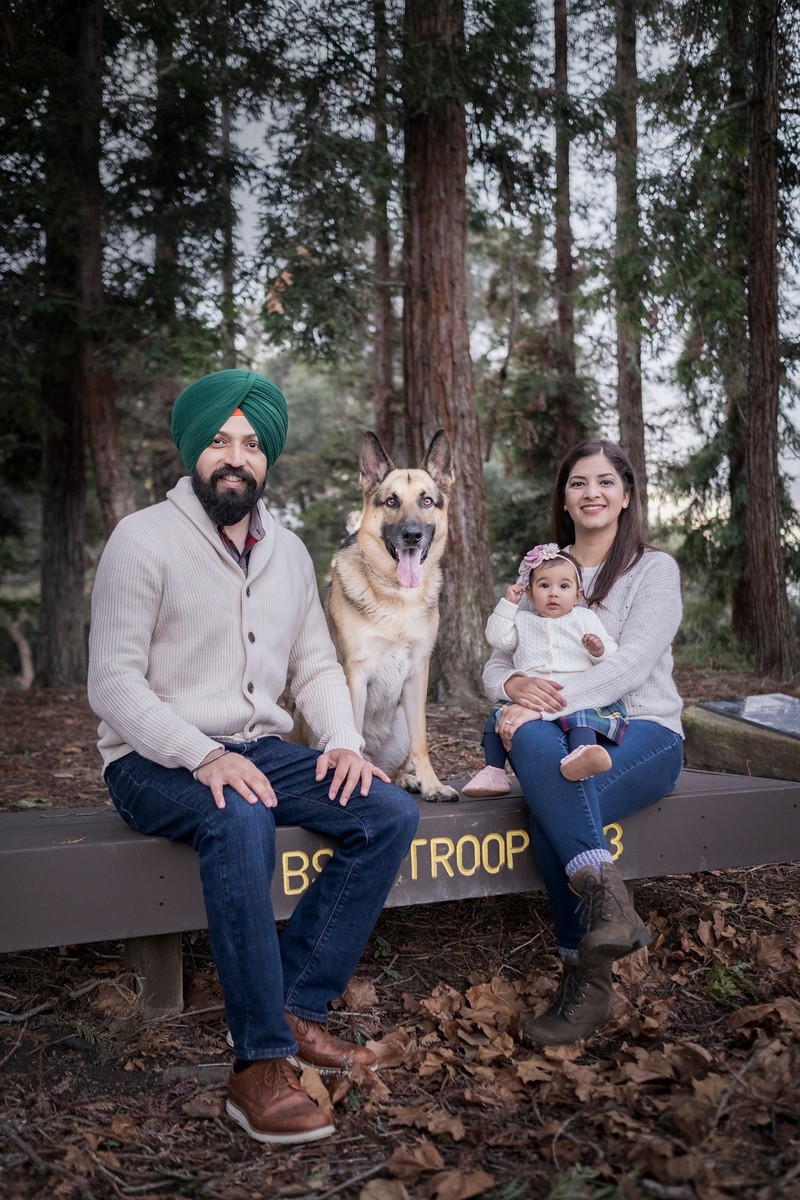 Q2: Why do you love astronomy? What does it mean to you?

I grew up listening to celestial (star) folk tales from my grandparents sitting under open starry skies. It ingrained a deep sense of admiration and intrigue for the cosmos. As a kid, I would frequently buy second-hand National Geographic titles which included artistic renditions of deep space objects. I would be in awe, envisioning these other worlds. It was not until I arrived in the US that my interest was rekindled with exposure to sci-fi movies and documentaries. One of my dreams is to travel to space! Hopefully, space travel would be possible in our lifetime. 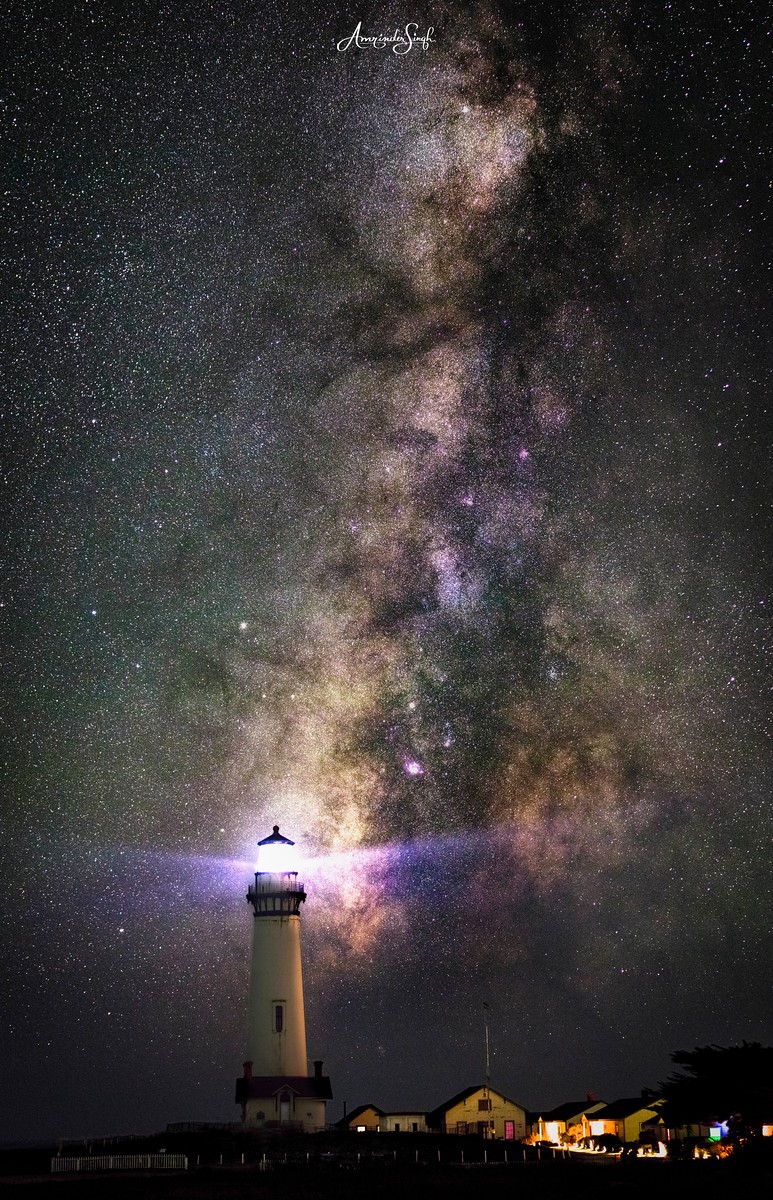 Q3: When did you start astrophotography? What was your first target?

I consider myself an accidental astrophotographer! I’ve done Milky Way shots as a landscape photographer, and even though I chased the Comet Neowise, it wasn’t until the 2020 Saturn-Jupiter conjunction that I decided to dabble in astrophotography. I was pleasantly surprised by the possibilities from our backyard. I started with my Fuji mirrorless and 100-400mm lens and soon added SkyWatcher star adventurer and ASIAIR PRO with ASI120MM Mini guidescope. My first target was Orion Nebula which I shot on New Year’s Eve, Dec 31, 2020. 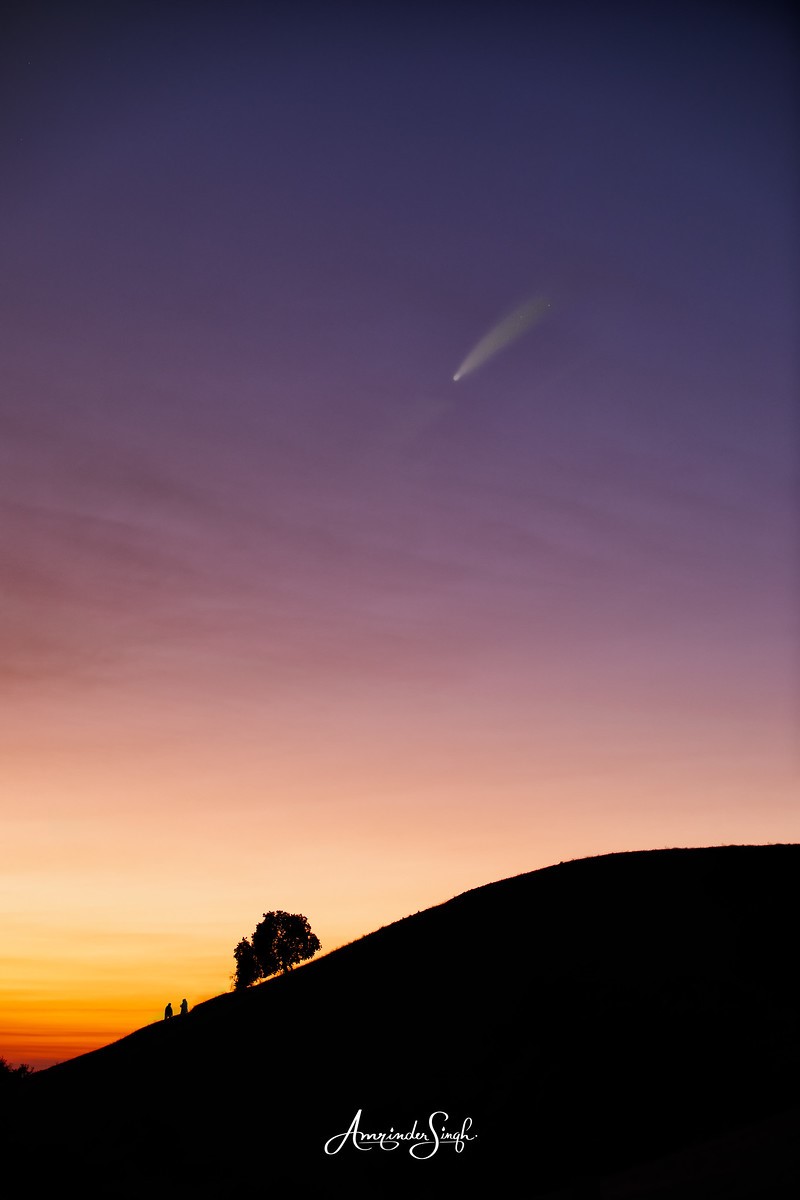 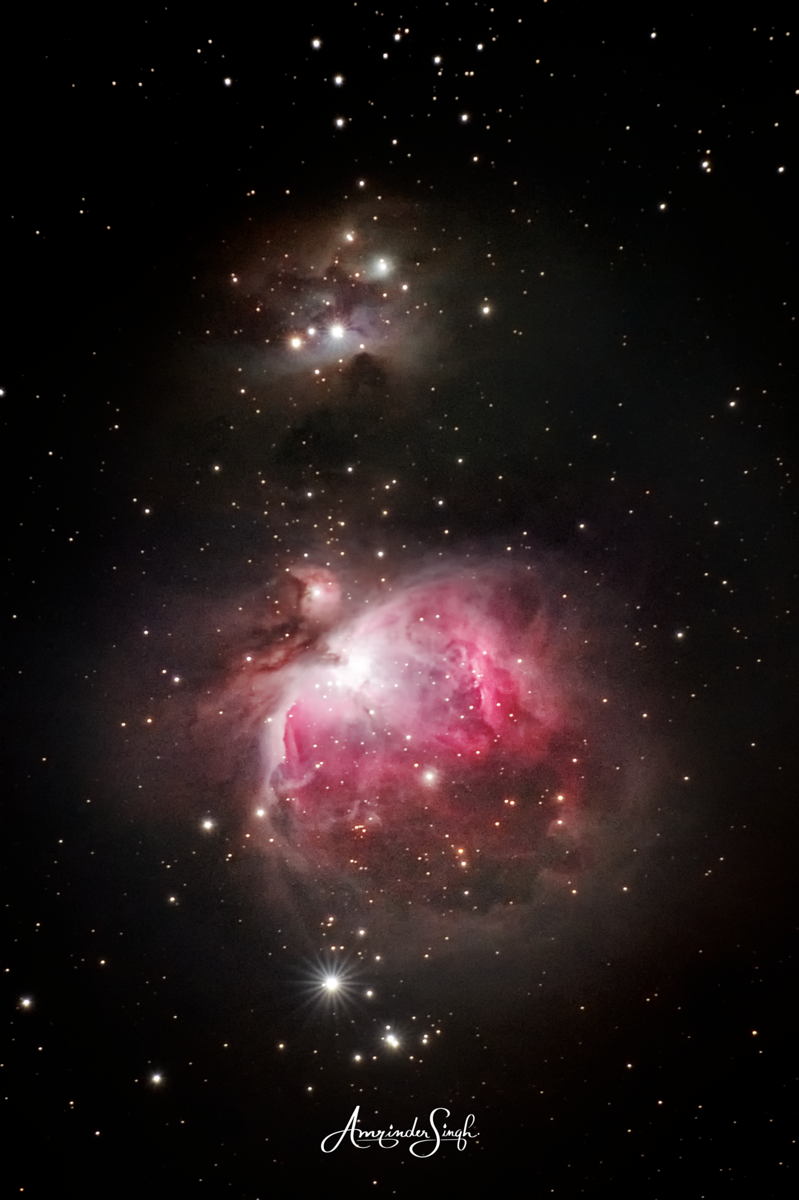 Q4: What gear do you use for astrophotography? Any pictures of them?

I come from design background and strongly believe that your gear should become invisible. The focus should be on capturing the object rather than fiddling with the gear. I always preferred mobile systems and liked devices that just simply work. I applied the same philosophy when buying astrophotography gear. ASIAIR PRO was a no brainer for me. I started shooting on my mirrorless Fuji camera (XT30) with Canon 70-200 f2.8 and Fuji 100-400mm lens. I was fortunate to have found a local mentor, Alan BC Dang (San Francisco based astronomer/astrophotographer) who guided me towards Vixen products which aligned well with my requirements. I currently own Vixen AX103S refractor and SXD2 mount. It makes stellar combination with ASIAIR PRO and ASI294MM Pro along with 3nm narrowband filters (in ZWO filter wheel). 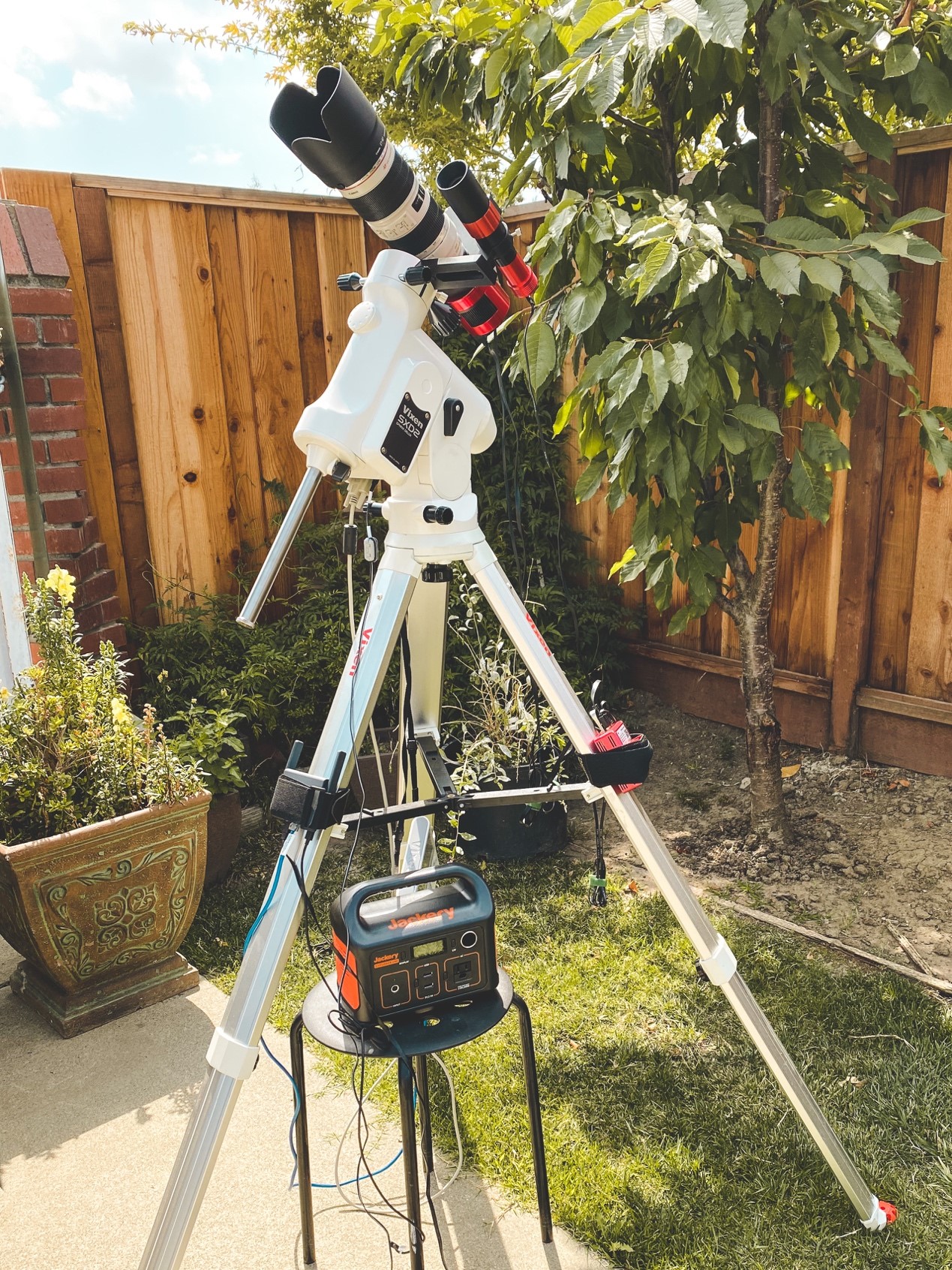 Q5: We see that both landscape photos and astro photos are shown in your Facebook page. Where do you think the differences in between these two kinds of photography?

Both terrestrial and celestial photographs have common essence, to capture the immense beauty and awe-inspiring wonders our Universe has to offer. The biggest differences are the time, location and gear used to capture each. Good landscape pictures can be captured even with a mobile phone but you have to plan the location and time to capture an ideal image. Whereas astrophotography is possible from your backyard, but specialized gear and technique are required. I also mostly share my astro photos on Instagram (@visualsbyamrinder) rather than Facebook. 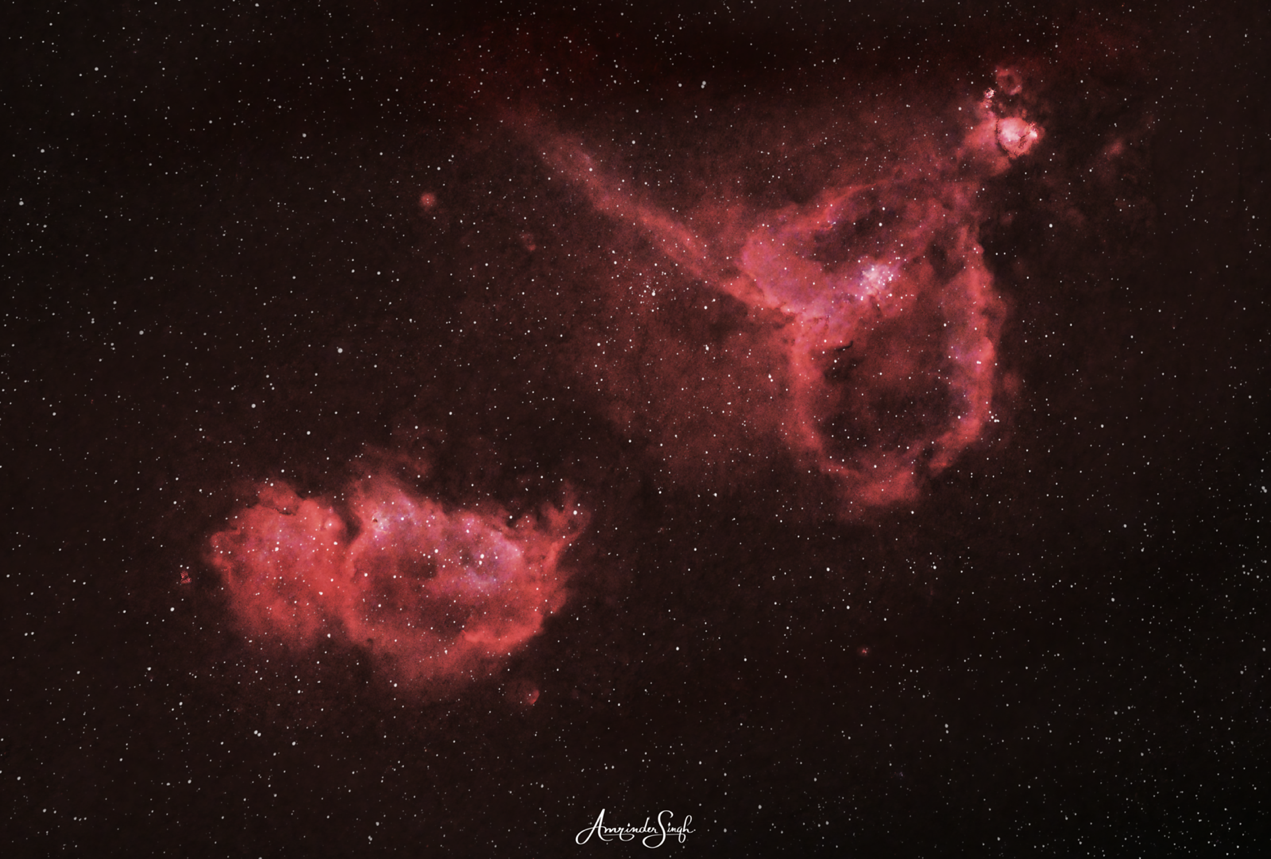 Q6: Your ASIWEEK image “Cygnus” was outstanding! How did you capture it?

It came out of my experiments for learning with my new astro gear that ran over a month. I wasn’t planning on it and certainly didn’t expect the results. As in landscape photography, I always look for grand vistas and still shoot with my camera lenses to capture the wide-angle shots to reflect the scale of deep sky objects. I started imaging with my Canon lens to get a wide-angle view of the impressive Cygnus region as I tested various settings. I soon realized I could tease out some amazing details in this area. But these were quite faint, so I decided to keep gathering as much data as required. I experimented with different coloring schemes and eliminated hours of bad subs. I started with 10 hours of integration followed by 40 and finally pushing it to 84 hours! The final results amazed me. The best part is I’m just getting started! 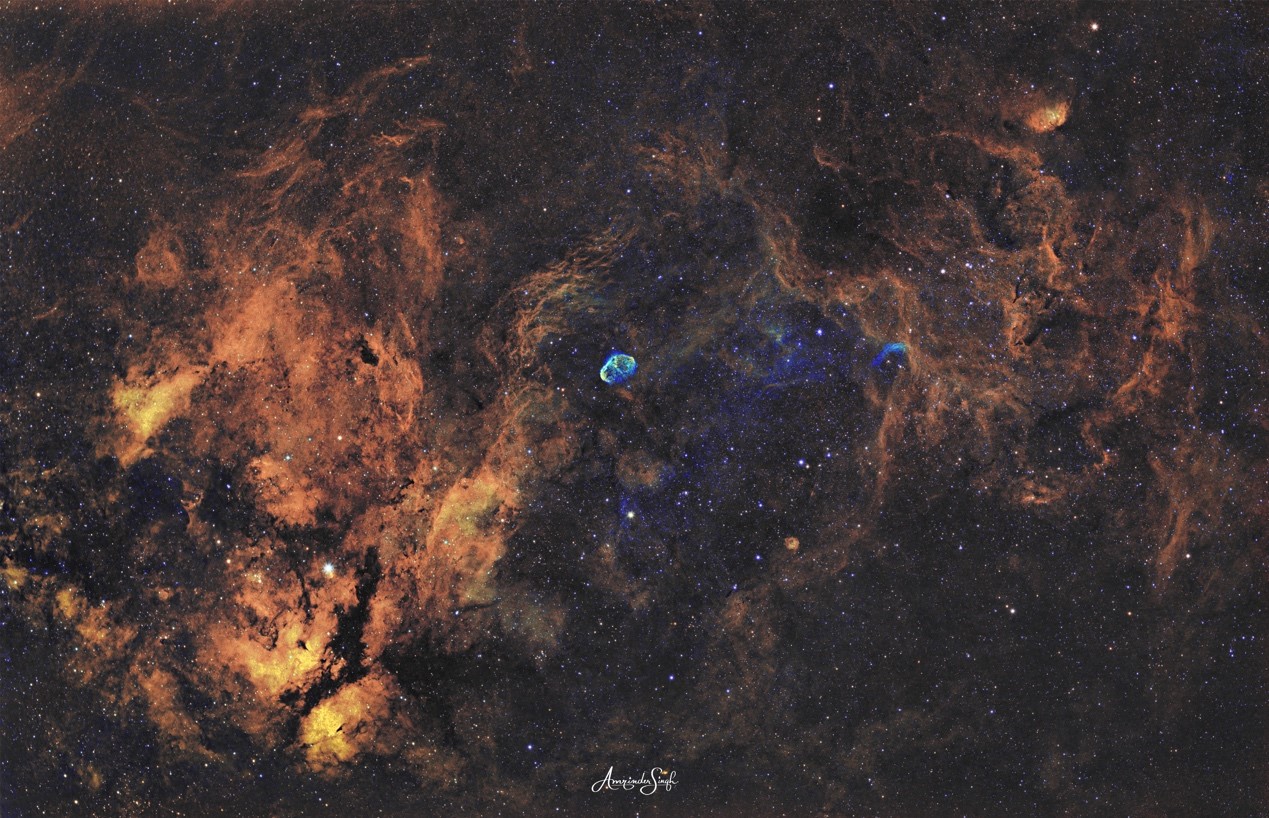 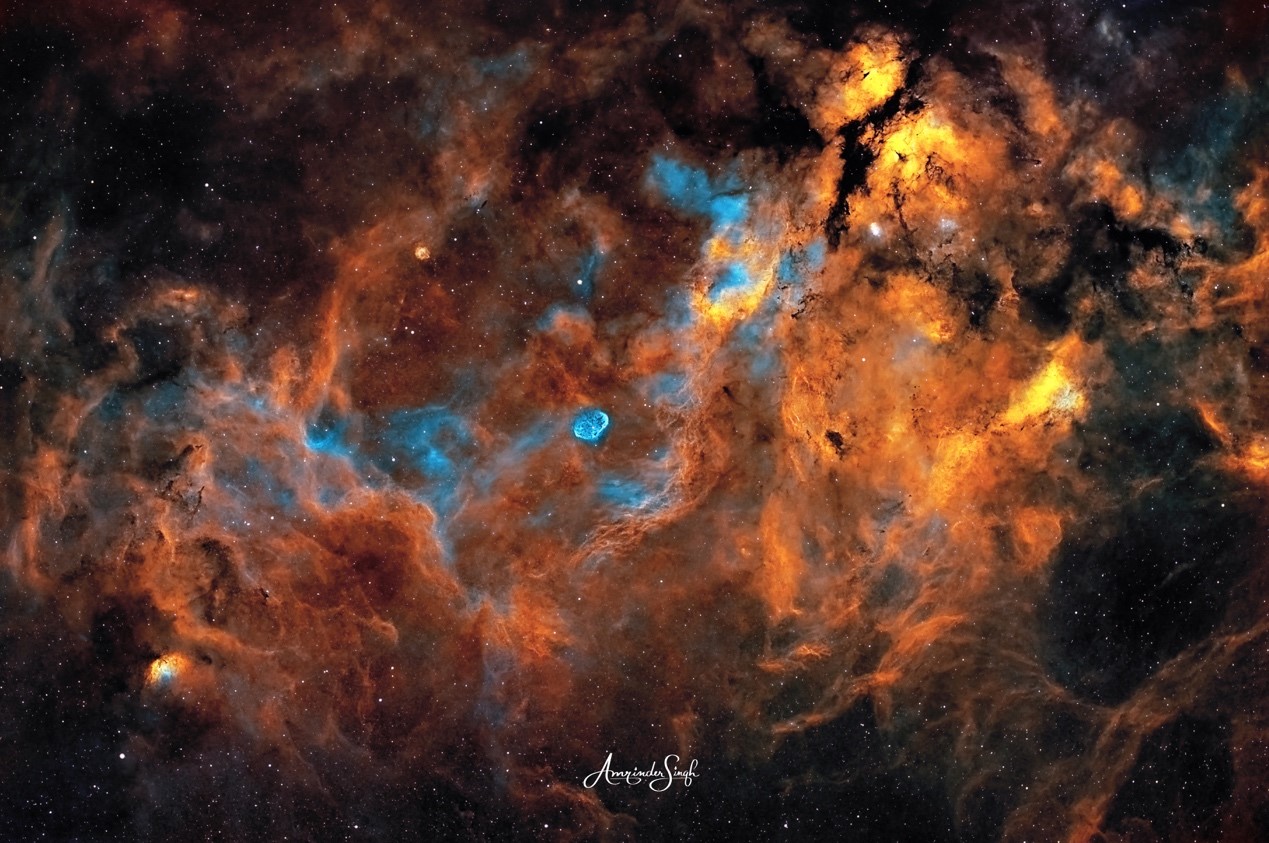 Q7: For such a wide range, what difficulties you have gone through?

There were a lot of challenges, with the image quality being the biggest one. Being a novice astrophotographer (started 8 months ago), I was still learning and had to sacrifice hours of data to maintain quality. The lens fully wide open was not sharp enough, managing light pollution was difficult in post processing, and I experimented with binning for proper SNR and resolution. Short summer nights also meant shooting more nights. But it was a great learning experience overall. 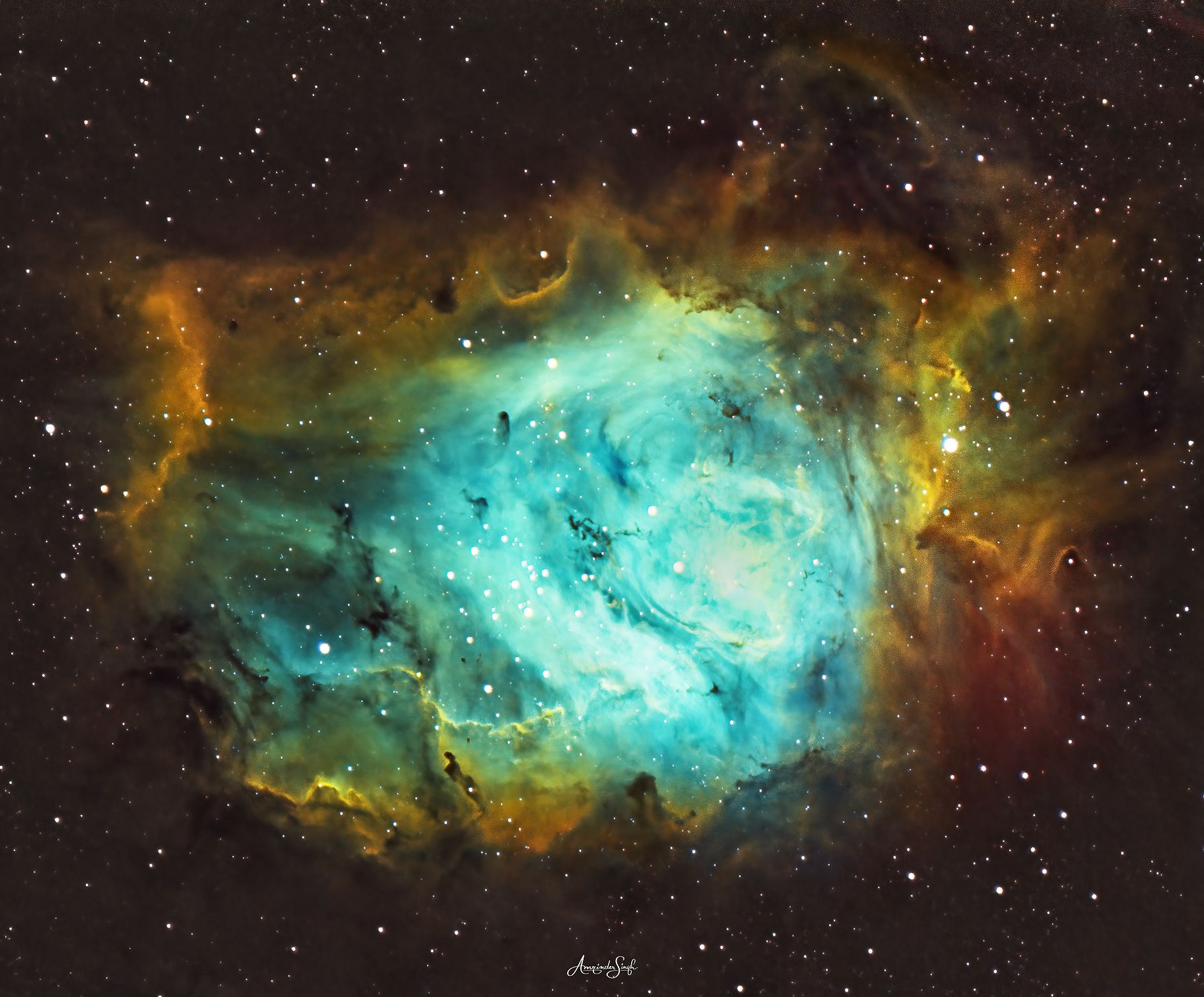 Q8: How long on average does it take for you to process one astrophoto? At what point you will have the thought “OK that’s enough I should stop here”?

I used to spend a lot of time editing using photoshop and could easily spend 3-4 hours editing one picture (after calibrating and stacking in Astro Pixel Processor). Recently, I’ve started using Pixinsight which has provided a more streamlined workflow and I have reduced my editing time to 1-2 hrs, with the goal to reduce it to less than an hour. I keep an eye on the noise and grain in the image and use it as a factor to decide when to stop. I am still learning about colors with SHO imaging and usually try multiple edits over a few days before deciding on the best one.

Q9: If you are asked to give some advice for the newcomers, what do you want to say?

One word, perseverance! Astrophotography requires a lot of patience and perseverance. I almost gave up a few months ago after I had one of those nights where nothing seemed to work. Astrophotography also relies heavily on the gear, especially tracking, imaging software and hardware (monochrome cameras if you live in light polluted areas). Research heavily and have clarity on the path you want to pursue. I purchased ASIAIR PRO pretty early as I knew I wanted a mobile setup and eventually built my whole kit around it. Be prepared to learn new things and be open to experimentation. Find a good mentor if you can; YouTube is your friend! 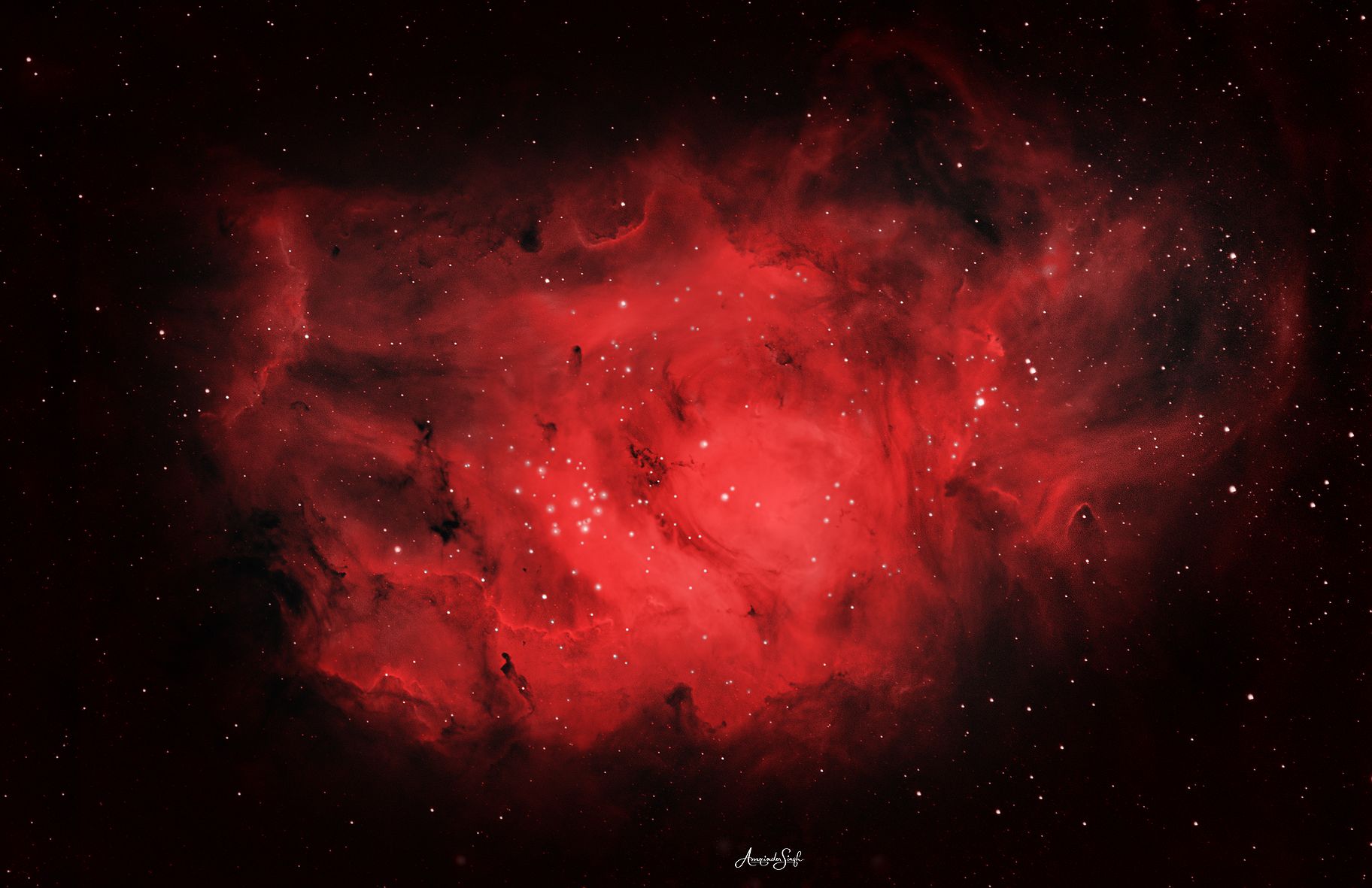 Q10: How do you think the future of astrophotography if take the increasingly heavy light pollution and the rapidly developed technology into consideration?

Increasing light pollution is definitely discouraging but astrophotography attracts passionate people and they will always be around. I feel we are in the golden age of backyard astrophotography where innovative tools are being created and access to information is easy. The technology has a major role to play in order to expand the adoption. Be it in terms of making gear affordable, reducing the friction in usability or providing tools that work around light pollution. My main frustration was spending too much time setting up and framing the image. With ASIAIR PRO as an ideal setup, I can be up and running in 20 minutes and can even control it from my bed. 3nm filters and monochrome camera allow me to shoot from Bortle 8 skies. Hopefully, the manufacturing cost of scopes and mounts will reduce overtime as well. 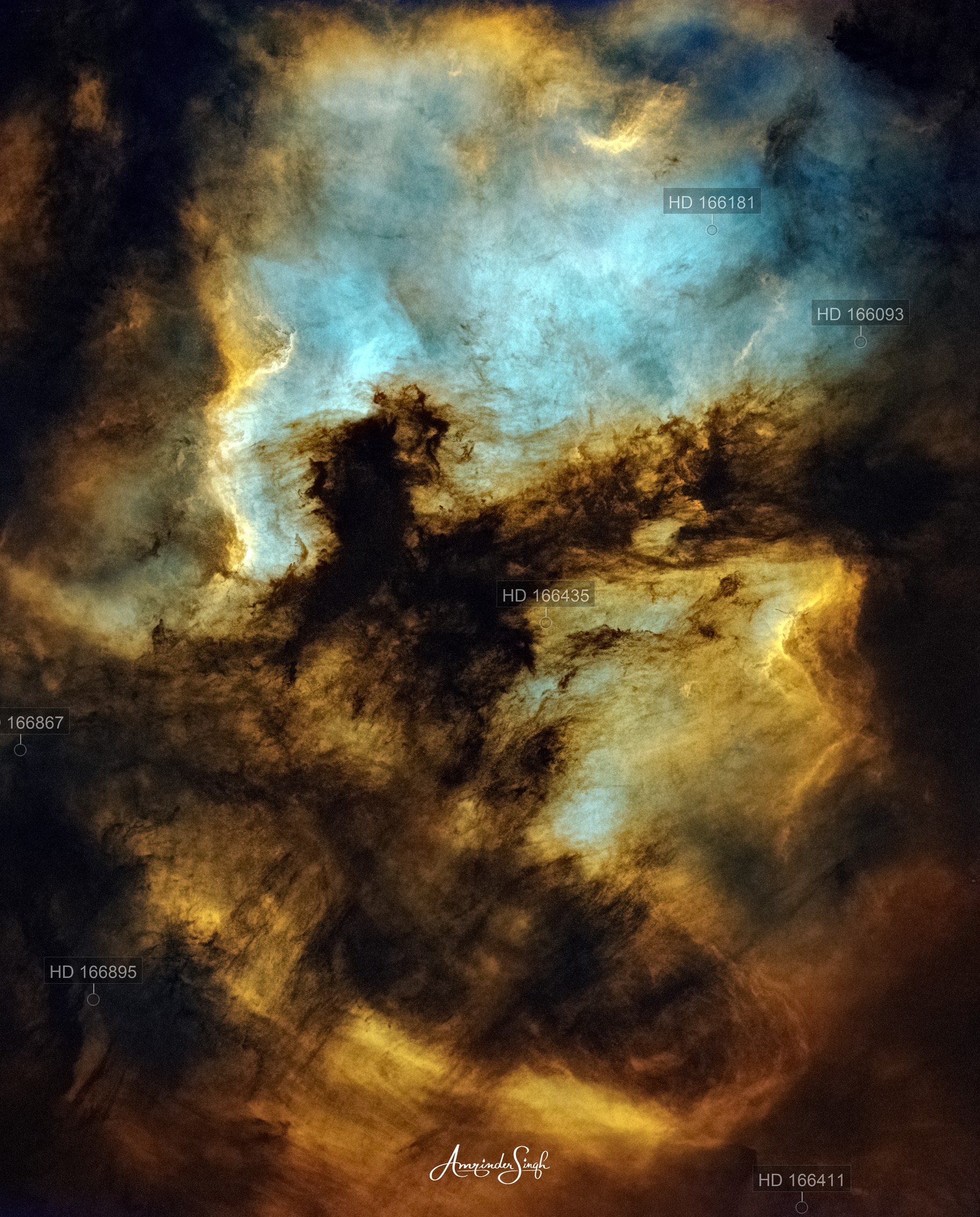 Q11: What objects do you plan to shoot next?

I’m really looking forward to shooting the Spaghetti nebula but until it’s visible, I plan to capture some close-up shots of Bubble nebula, Pelican nebula and Tulip nebula.

Q12: Could you please tell us one or some interesting stories when doing astrophotography?

I believe a few people can relate to this one. I planned a trip to Bortle 3 sky and drove for 2 hrs to get shot of Rho Ophiuchi with my Fuji mirrorless camera. I used ASI294MM Pro and ASIAIR to polar align and swapped cameras for the capturing session. After inspecting first few images, I decided to join the star part for some visual astronomy. One of the cables was snagging on the mount and caused minute star trails which were not visible on the tiny camera screen. I went to sleep for the night and only realized the issue when I arrived home. I could only salvage 4 subs out of 80 I took. It was a good lesson learnt. 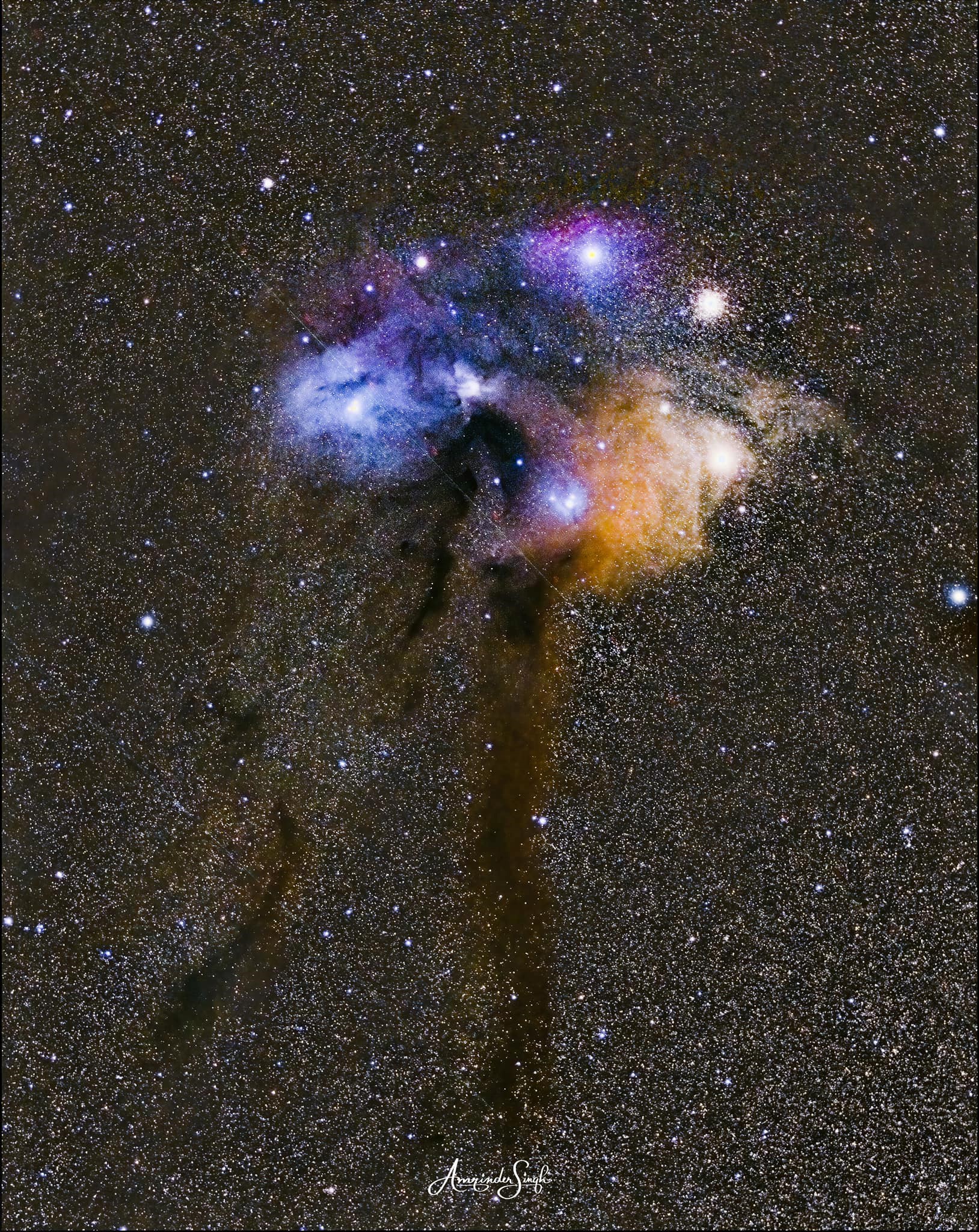 Q13: How did you know ZWO? How many ASI cameras do you have?

ZWO came up frequently during my early research when I was still shooting with my mirrorless camera. I was impressed with the whole echo system that was developed by ZWO and decided to build my kit around it. I use ASI120MM Mini for guiding and ASI294MM Pro as main camera but would love to upgrade to a full-frame ASI6200MM Pro in the future. 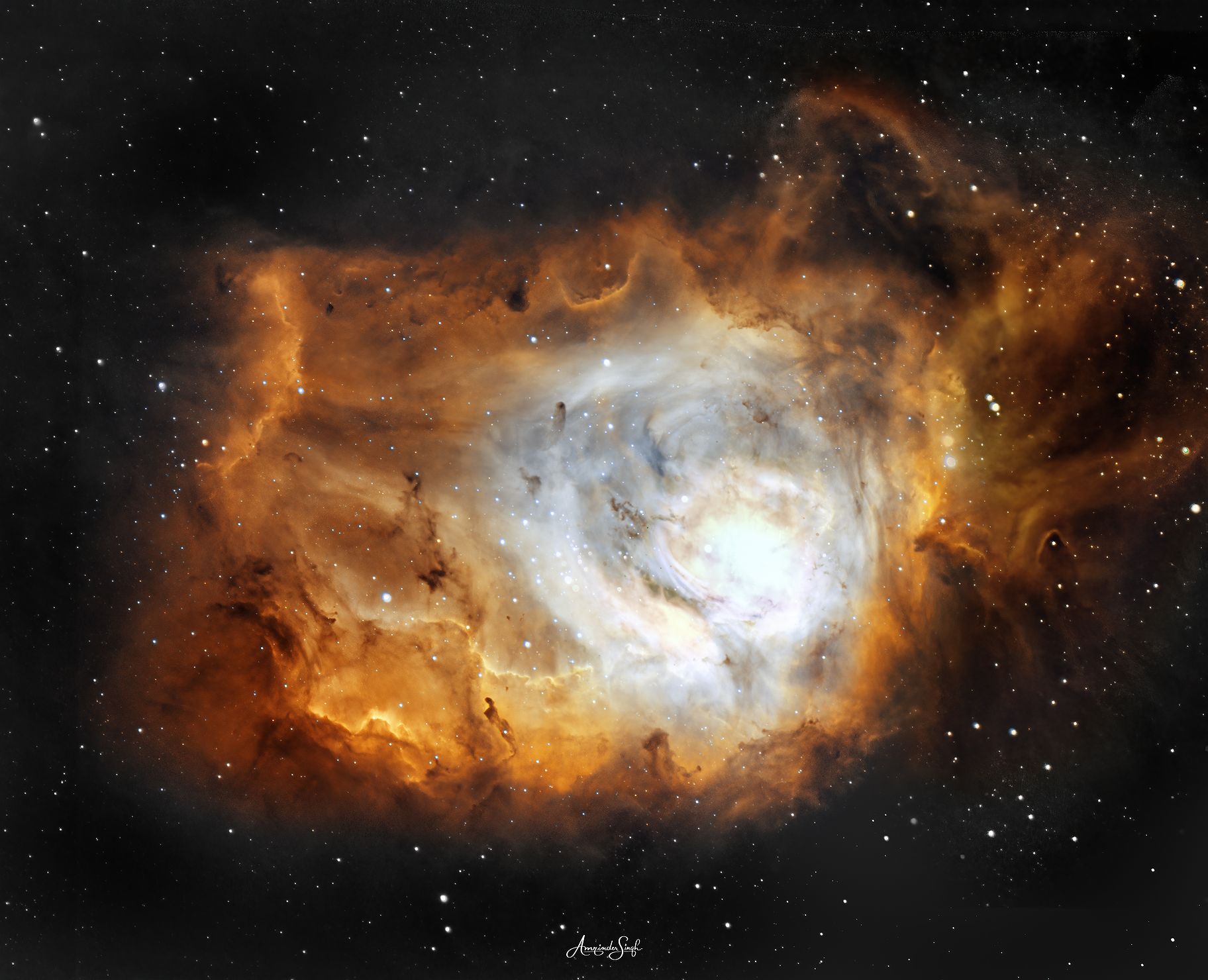 Q14: We noticed that you also use an ASIAIR PRO. How do you like it?

As I mentioned earlier, ASIAIR PRO was one of my first astro gear purchases. I believe it is a game changer for astrophotography, especially for me. As a newcomer, managing multiple devices (laptops) and software is quite challenging and discouraging. ASIAIR addresses both with a small form factor and intuitive UX. I would certainly not be doing astrophotography if it was not for ASIAIR PRO! The biggest challenge with ASIAIR PRO I had was getting the connectivity. I ended up pairing it with a travel router.

Q15: What suggestions do you have for ZWO? Please do not hesitate to tell us if you do have any ;D

I think you have a great thing going and it is evident you are listening to your customers. You continue to innovate to make products better and reduce customer friction. I would like to recommend 2 things:

–       Enable ASIAIR software to allow scheduling shooting multiple targets in the night. It would be great if I could enter RA and DEC coordinates in addition to other details.

–       This one might be a hard problem but improving the compatibility with more scopes. I use Vixen AX103S scope and have been struggling to make ZWO EAF work with it. Maybe ZWO can invest in 3D printer that can quickly print and ship parts on demand.