Andrea Maniero is the winner of ZWO 2020 ASIWEEK #20 and has brought us many extraordinary astronomy photos. To make our ZWOers know this excellent astrophotographer better, we make this interview. Let’s all take a look now. 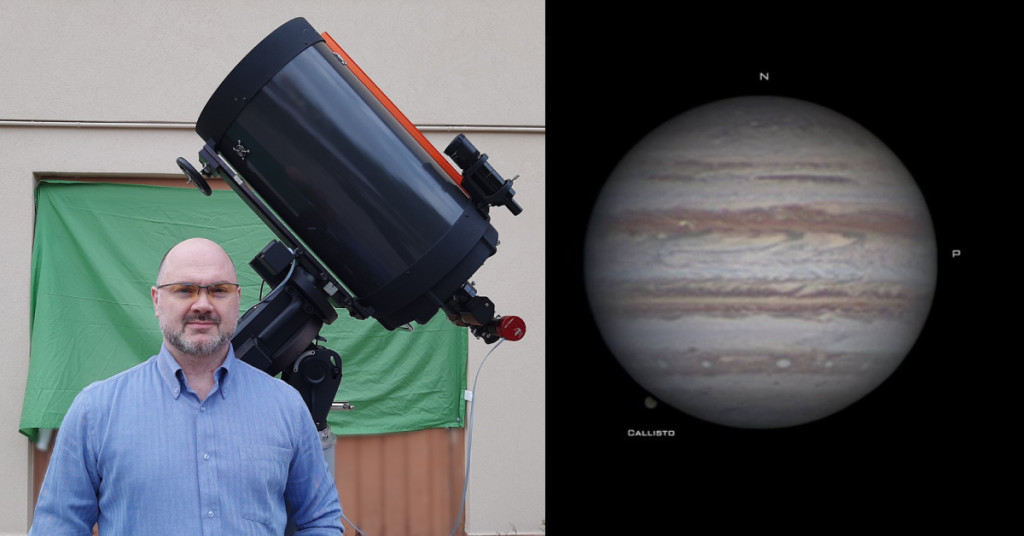 Q1: At first, congratulation that your nice image won #ASIWEEK! Can you introduce yourself to us?

Thank you very much, I am Andrea Maniero I am 51 years old and I live in Padua a city in the northeast of Italy located in the plain, I define myself a sub-urban amateur astronomer and I am passionate about astronomy from the age of 8 when I picked up binoculars for fun and I aimed it at the Moon, from that moment I started to observe the sky and it was love immediately! At age 14 my father gave me the first telescope the classic Newton 114/900 with which I begin to observe mainly the planets and at the same time I start reading magazines and books about astronomy. After completing my studies, at age18 I became a member of the GAP and started attending the 400mm Newton G. Colombo observatory in Padua, for a short time I became responsible for the observatory, and I taught groups of schools on public observation evenings. I have made observations of the sky for many years with many types of instruments mainly on planets. 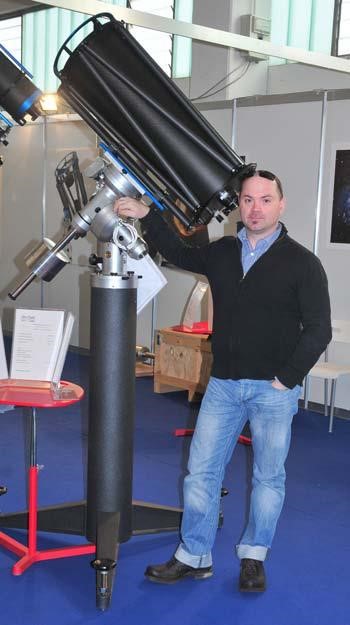 Q2: How did you start astrophotography and why?

I started with photography in 1984 with film and camera applied to the Newton 114/900 telescope, I was enchanted by the photographs of the planets that I saw in books, in particular those of Jean Dragesco, and at that time digital sensors for amateurs did not yet exist, and the processing software of today did not exist, I did normal photographs and my first subject was the Moon and Jupiter, then in the late 1980s I started doing planetary astrophotography with the Newton / Cassegrain 400mm telescope of the G. Colombo observatory and when I left the group due to internal problems, I purchased a new telescope and I continued to do independent astrophotography, in the last 10 years with the arrival of digital sensors, software and the internet, I became specialized in high planetary and lunar resolution. 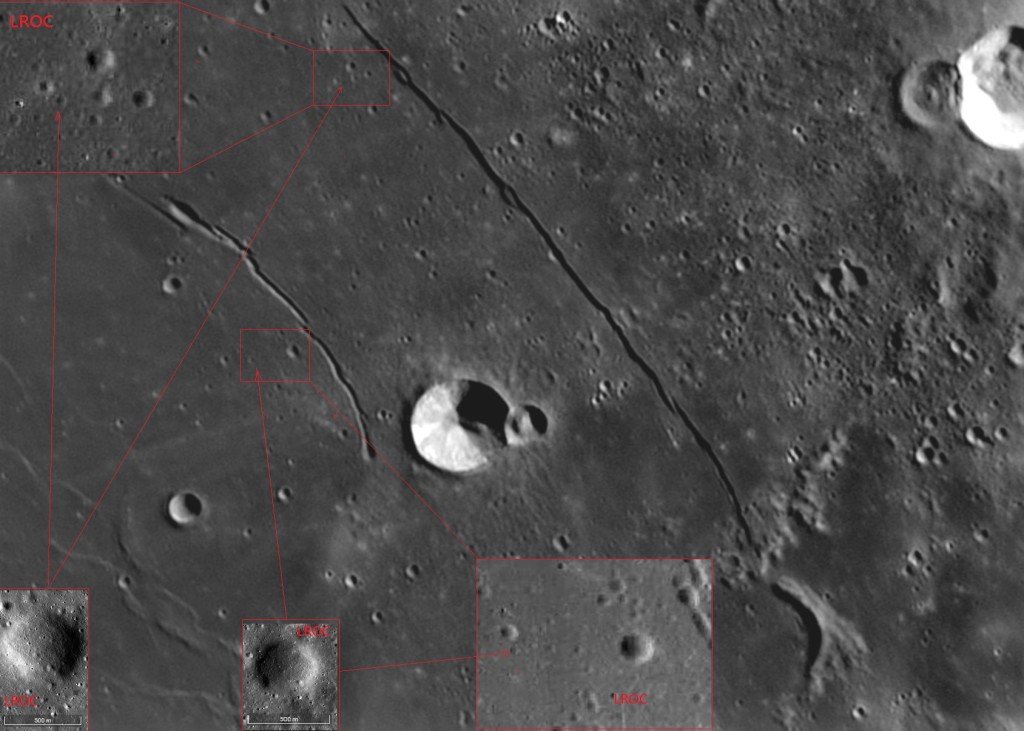 Q3: What setup do you use? Can you show us some pictures?

I have 3 telescopes for high planetary resolution, a NortheK Dall-Kirkham 355mmf / 22 in a semi-fixed position, a NortheK Cassegrain 250mm / f15 for itinerant planetary astrophotography and an optimized Celestron C14 that I use as a multirole telescope, for deep sky and planetary, I mainly use ZWO ASI cameras.

Q4: What type of telescope do you prefer?

The NortheK Dall-Kirkham 355mm f / 22 is a semi-professional instrument of high quality without compromise, it is the best telescope I have had of this diameter and it has given me the greatest satisfaction but it is a telescope that needs excellent seeing and a fixed observatory, my favorite optical scheme is the pure Cassegrain and for this reason the new Cassegrain 355mmf / 15 will arrive shortly, a little lighter and more transportable. Then there is a new project I’m working on with NortheK for the realization of my definitive telescope for high planetary resolution that will be ready when the planets are a little higher in the sky… but i can’t talk about it now, it will certainly be equipped with a ZWO ASI camera. 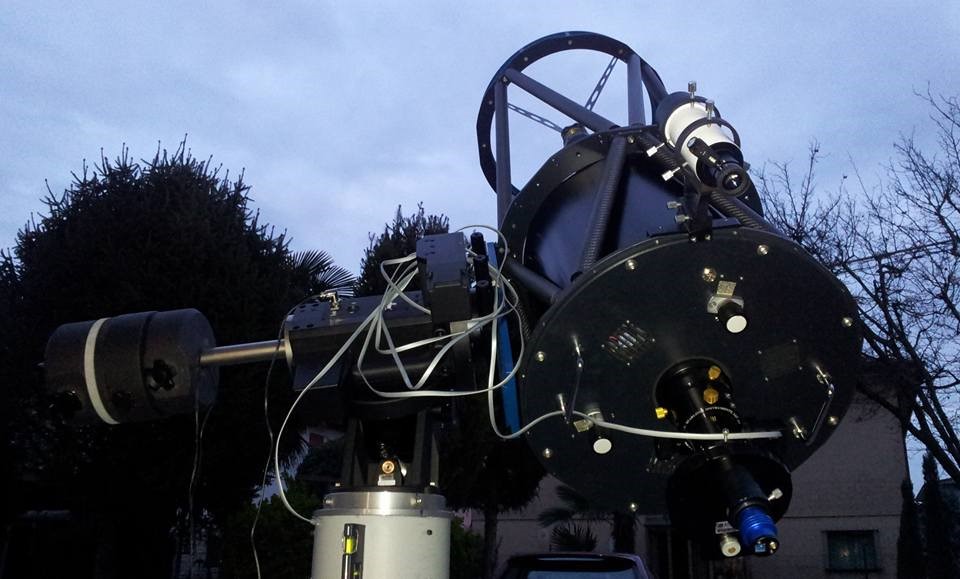 There are various reasons, one of these is that the planets were the first celestial objects that I photographed and fell in love with! Another reason is scientific, their atmosphere is constantly evolving, even if we sent many probes that have visited them, the collaboration of amateur astronomers with professional astronomers is crucial, our observations and images have allowed us to discover and observe many new phenomena, such as the famous storm on Saturn, the sandstorm and the clouds at high altitude on Mars, monitor the atmosphere of Venus and we must not forget the impacts on Jupiter, then in my area there is too much light pollution, it is not a sky suitable for deep sky astrophotography, it is not very transparent due to high humidity and at my latitude for a long time of the year the sky is overcast. The last reason is my activity of Beta-tester on telescopes, this has led me to specialize particularly in high lunar and planetary resolution, to conquer many APODs, and to be first in an Italian national competition for high planetary resolution. 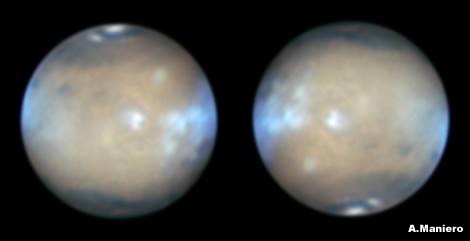 Q6: Do you have the good altitude of planets in your region? And how about the seeing condition?

Unfortunately in the past two years the planets are very low in my latitude and I am afraid that I will not be able to make good shots until 2022, I have to content myself with following the atmosphere of Venus, Uranus and Neptune, without forgetting the craters of the Moon.

Seeing is not very stable during the year, but there are periods from late winter until autumn when seeing and stability are good. 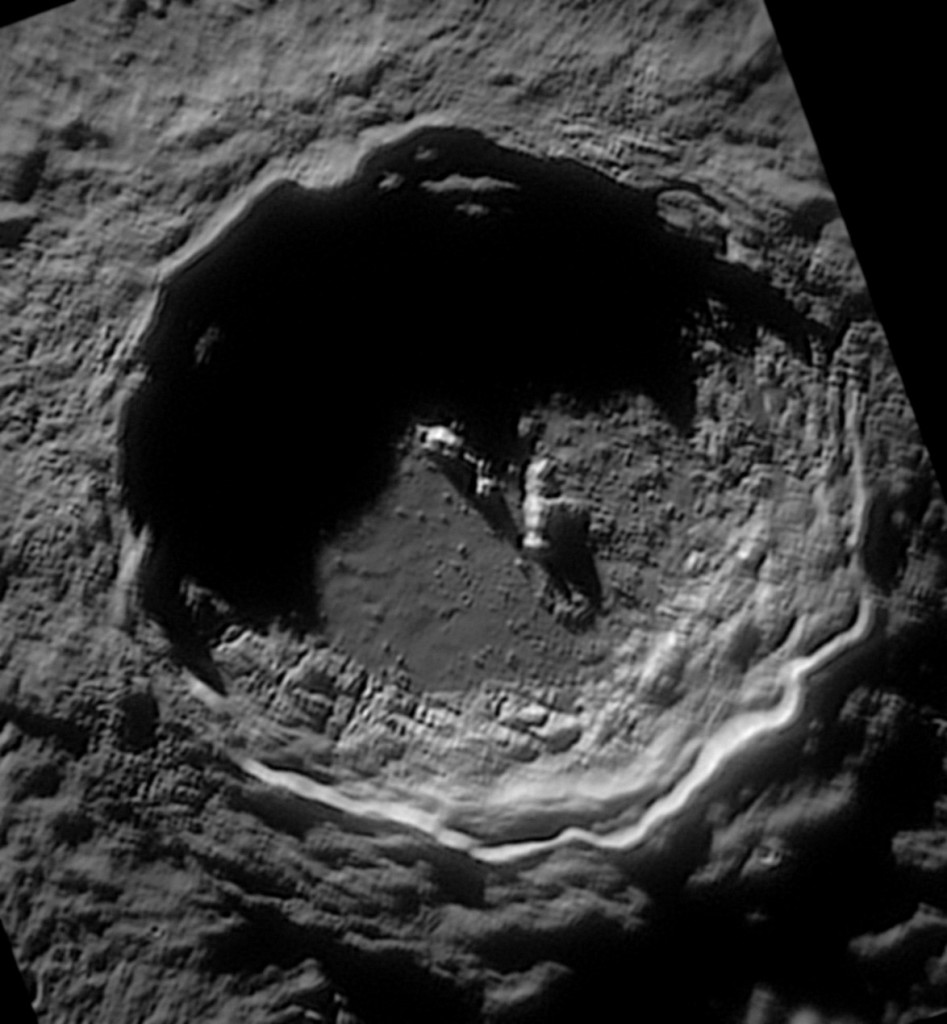 Q7: As to your winning image Venus, can you tell how did you manage the beautiful false color?

I used 350nm ultraviolet band combined with 807nm infrared band images to obtain luminance, then I used the derotation through the Winjupos software which generated a synthetic G channel and I merged everything again in Winjupos. 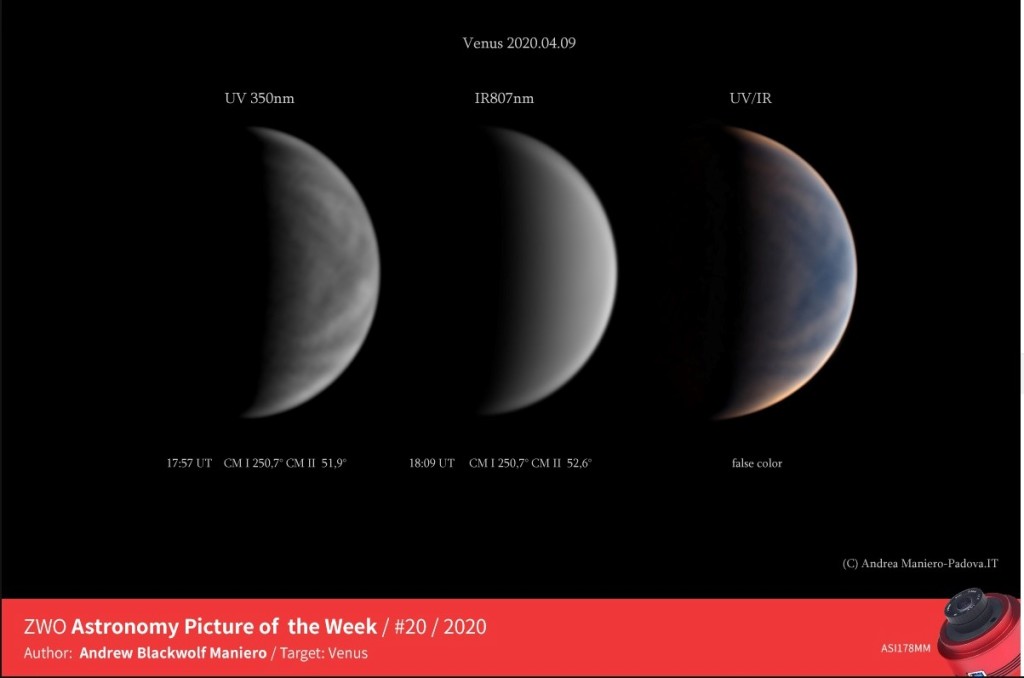 Q8: What’s the biggest and most obvious improvement you’ve achieved in so many years of planetary imaging?

I improved my shooting and processing techniques a lot. Studying the software I figured out my own way to get the best results. I made many mistakes reading articles or tutorials by many astroimagers who thought they were experts, but over time I realized that they were not so good, I deepened my technical knowledge on telescopes and planetary imaging sensors by learning to process data well and extract details in the correct way, many imagers still process gaseous planets as if they were solid bodies and this is not good, you should never force your hand. 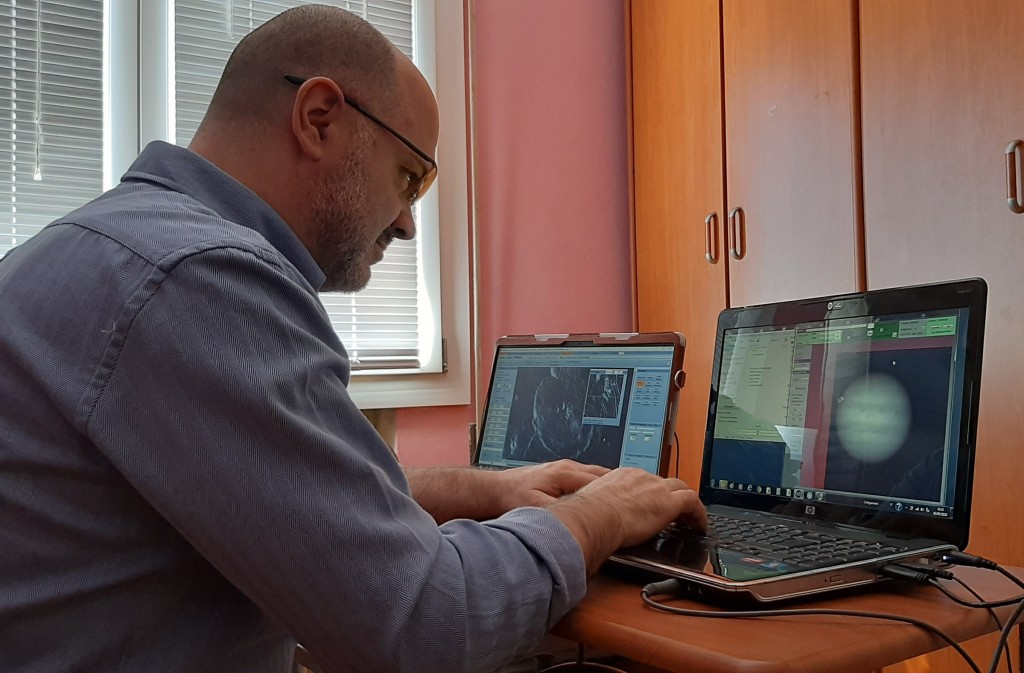 Q9: What suggestions can you give to the newcomers?

I want to tell them to start with small steps and don’t rush, study a lot and do many tests, do research on the internet on shooting and processing techniques, study the characteristics of celestial bodies, also to study thoroughly the acquisition and processing software of images to know what needs to be done. A very important thing is to buy good quality technology if possible. Better to give up a good hamburger during the year but then buy a good filter or a good sensor to get good results.

Q10: What do you care most when buying a planetary camera? Do you prefer a mono camera or a color one?

I look at many things in a planetary camera, it must have at least three main characteristics, great full-frame acquisition speed for lunar imaging, the widest possible QE curve and the highest and widest possible QE peak at the length of wave that interests me. Choosing a planetary camera for an astroimager is very difficult because the planetary astroimager needs to work with good QE throughout the entire spectrum, from ultraviolet 350nm for Venus to 889nm infrared for Jupiter’s methane band, up to 1 micron for thermal imaging of Venus and now there is still no camera capable of satisfying this need with just one sensor. Currently, I have to work with 2 cameras to optimally cover the spectrum, ASI178MM and ASI290MM. My preference is the monochromatic cameras because they allow to obtain a finer image and to work better on each single acquisition channel. 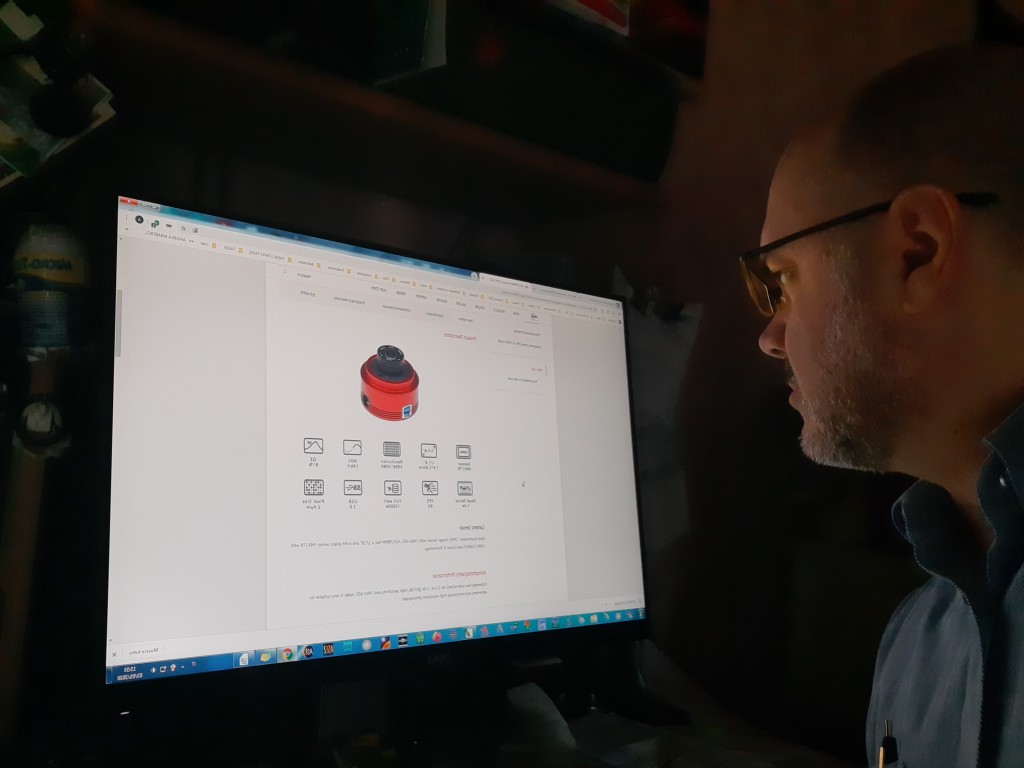 Q11: How do you like your ASI178MM camera? Will you recommend it to your friends?

I love ASI178MM! It is a great 14-bit camera with little noise but is underestimated by many astroimagers, I am very satisfied because it covers almost all the spectrum that a planetary astroimager interests in an optimal way up to near-infrared for all planets up to

Saturn and has small pixels to make high resolution and is very fast even in full format for lunar images. Definitely recommend ASI178MM

to make planetary imaging even to newcomers. 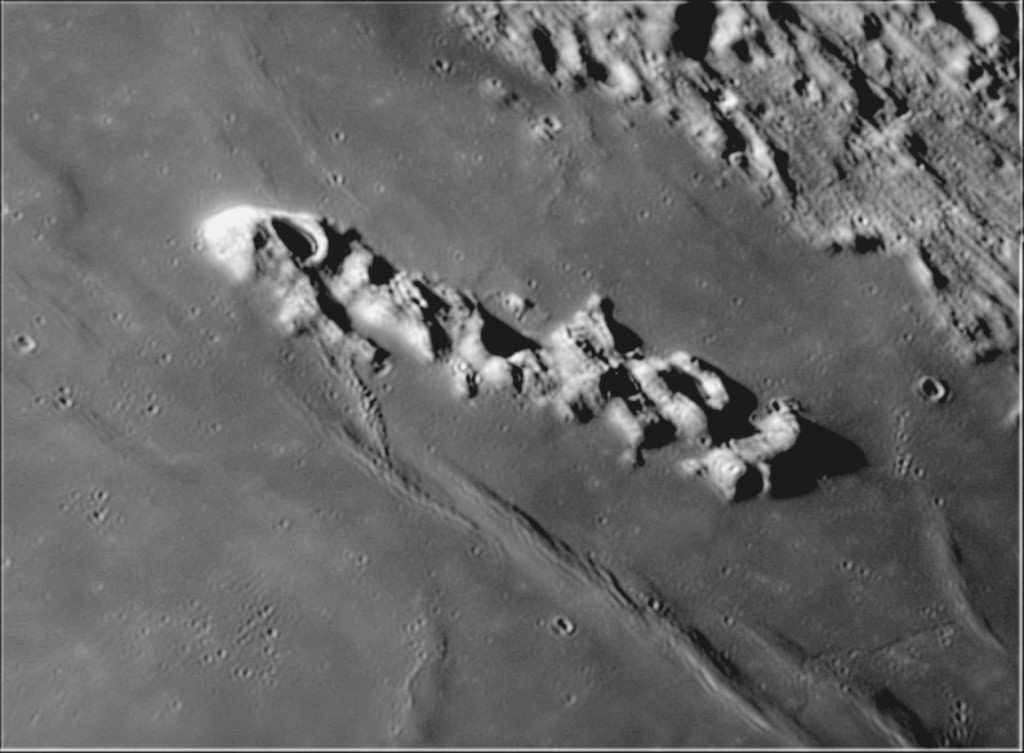 Q12: Will you consider capturing the deep sky in the future?

Yes, absolutely! Actually I have already done some deep sky images in the past but I did not have a dedicated sensor for this type of astrophotography, but I see that ZWO is making great strides in the field of sensors for deep sky and in the future I will look at one of these! Unfortunately, the sky in this north-east plain is not dark enough and the new LED lighting creates many problems even with narrowband filters. 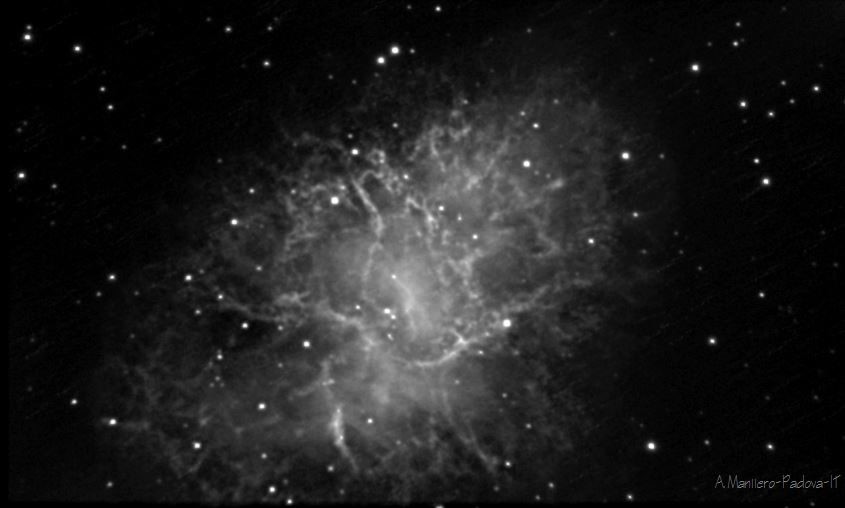 Q13: Do you have any feedback or suggestions for ZWO?

ZWO is a large booming company, it has captured a very large slice of amateur astronomers with a series of ever new sensors and many accessories that have made it possible to bring a large number of people closer to planetary and deep-sky imaging with great easiness thanks to good functionality of its cameras, and at the right cost. The interface problems are almost non-existent and the latest proprietary software works very well. I see that ZWO is currently focusing a lot on sensors for deep sky, but I hope it will not forget the planetary imagers, some sensors would have good characteristics for planetary imaging but they are only in color.

Q14: One last question: Can you tell your next target?

My next targets will be to be able to take high-resolution thermal images of the surface of Venus in infrared, to start deep sky images to search for extragalactic supernovae even if this requires excellent sky conditions, and to complete the project for my definitive telescope which will be a surprise for Italian area…. and maybe someday become a testimonial for ZWO! 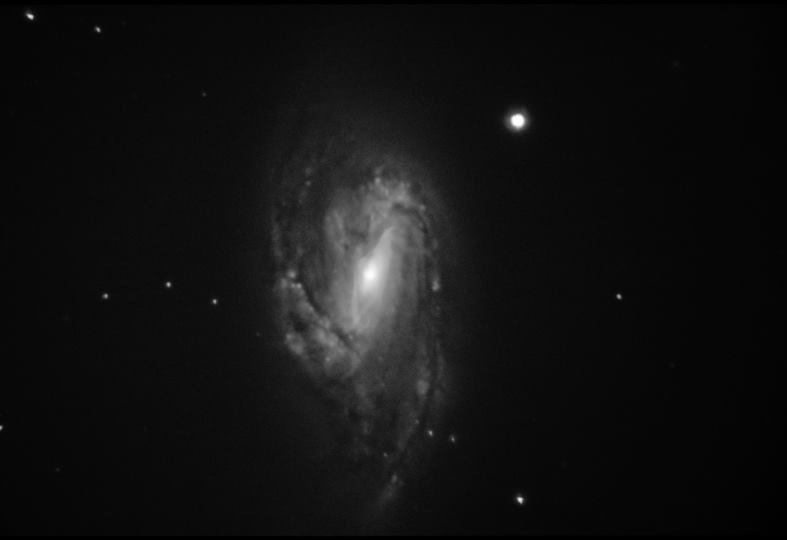