Q1: First of all, could you please give us a self-introduction so that we can know more about you?

I live in Flagstaff, AZ, USA, the World’s First Dark Sky City and home to Lowell Observatory and the US Naval Observatory. I am relatively recently retired from a 30-year career in the bicycling industry. I started as a bicycle messenger in New York and San Francisco and went on to manage bicycle shops in Moab, Utah, and Flagstaff and Sedona, Arizona.
In addition to being an avid amateur astrophotographer, I enjoy mountain biking, dirt biking and motorcycle touring. My wife and I have visited much of the western US, Baja California in Mexico, New Zealand, Chile, Peru, Bolivia, Argentina, Spain and Morocco on motorcycles. 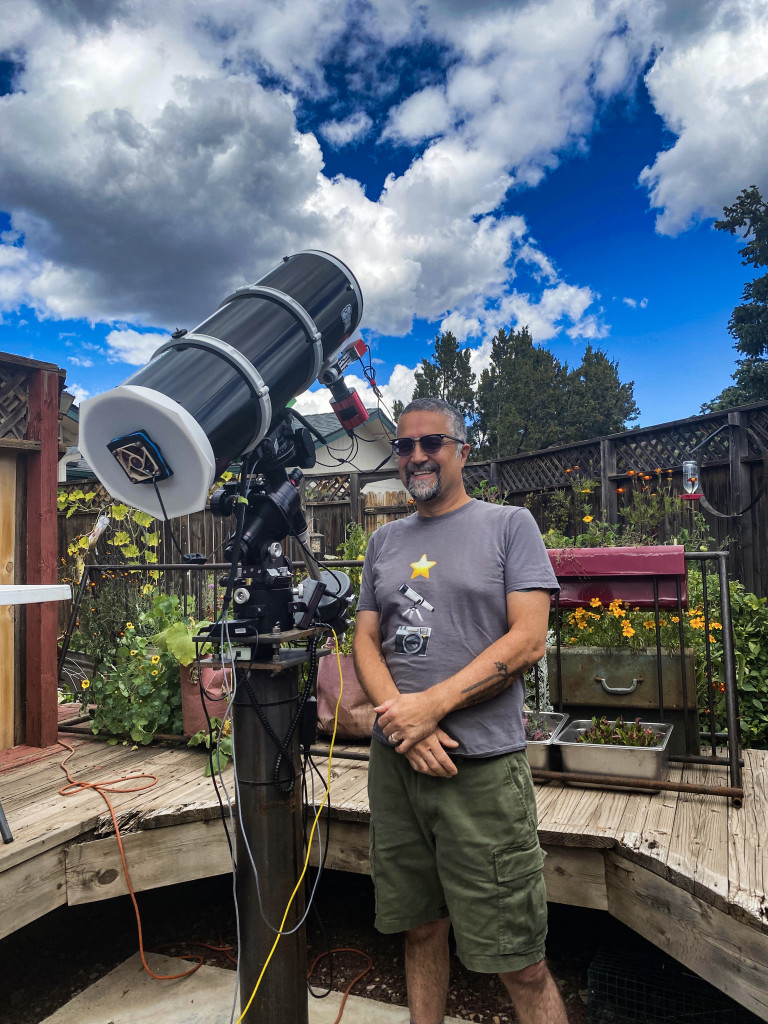 Me with my equipment

Q2: What makes you become an astrophotographer? How long have you been?

I had a strong interest in astronomy as a kid in the early 1980s. I saved up and purchased a Celestron Super C8 with a bunch of Roger Tuthill accessories and was working towards shooting on film with a Nikon SLR borrowed from my dad. Before I made it to shooting film I got distracted by girls and cars. In some ways I am glad that I didn’t try to shoot film because, from what I have seen and understand, the results are pretty underwhelming when compared to modern CCD and CMOS cameras.

A few years ago I decided I should get a telescope and rekindle my interest in the night sky. I under-invested in a scope and within weeks ordered a nicer scope. Then another, then a DSLR, then a nice mount, then an ASI camera, et cetera. 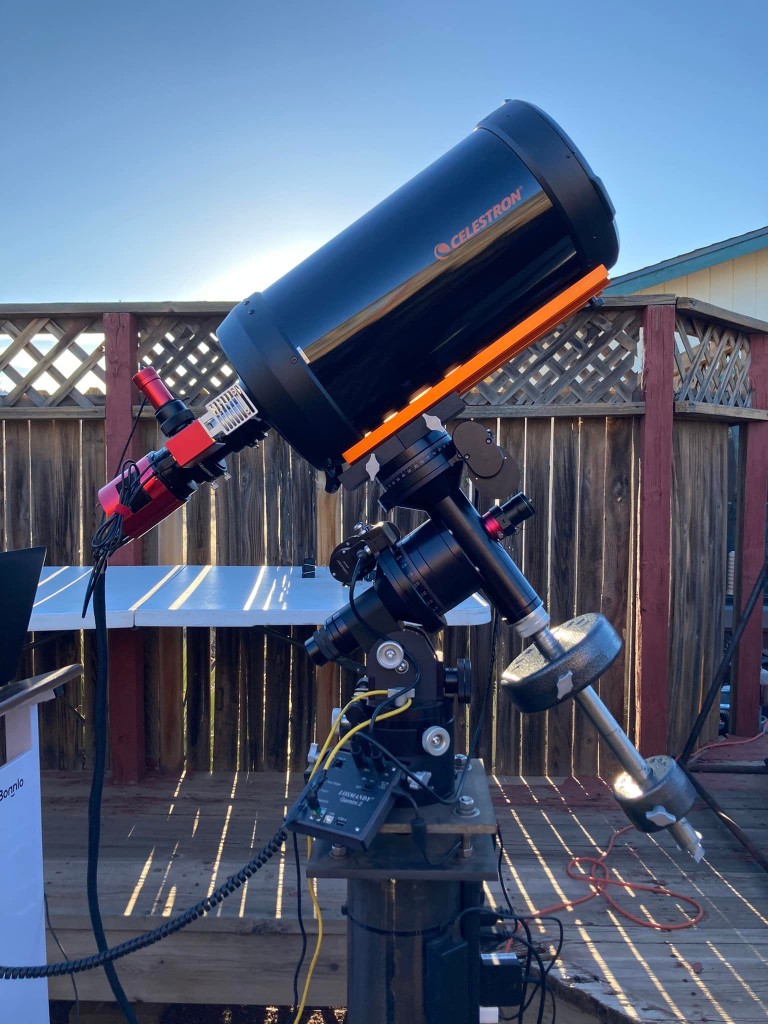 Q3: As to your winning image, the Shark Nebula, would you please tell us how did you capture it? Would you like to share with us some detailed camera settings?

I shoot DSOs exclusively with the ZWO ASI2600MC Pro at the recommended 100 gain and 50 offsets and only the IR cut filter that comes in the camera. I am fortunate to have very low light pollution at my house, north of Flagstaff, AZ, USA, the World’s First Dark Sky City.

For this image, I was using the Starizona Nexus .75x reducer/corrector on my Sky-Watcher Quatro 250P. This gives me a 750 mm focal length at F/3 so I shoot relatively short exposures of 120 seconds. This is my favorite of the multiple set-ups that I have with my three telescopes. The Nexus affords me a very fast focal ratio at a relatively long focal length. With the ASI2600MC Pro, my resolution is right at the “magic” 1 arc second per pixel, so this configuration is really “firing on all cylinders”.

For the Shark Nebula image, I shot 31.6 hours of subs, which takes a really long time to calibrate, register and integrate into Pixinsight! I really like working with lots of data because it makes processing easier and yields much better detail and overall results. 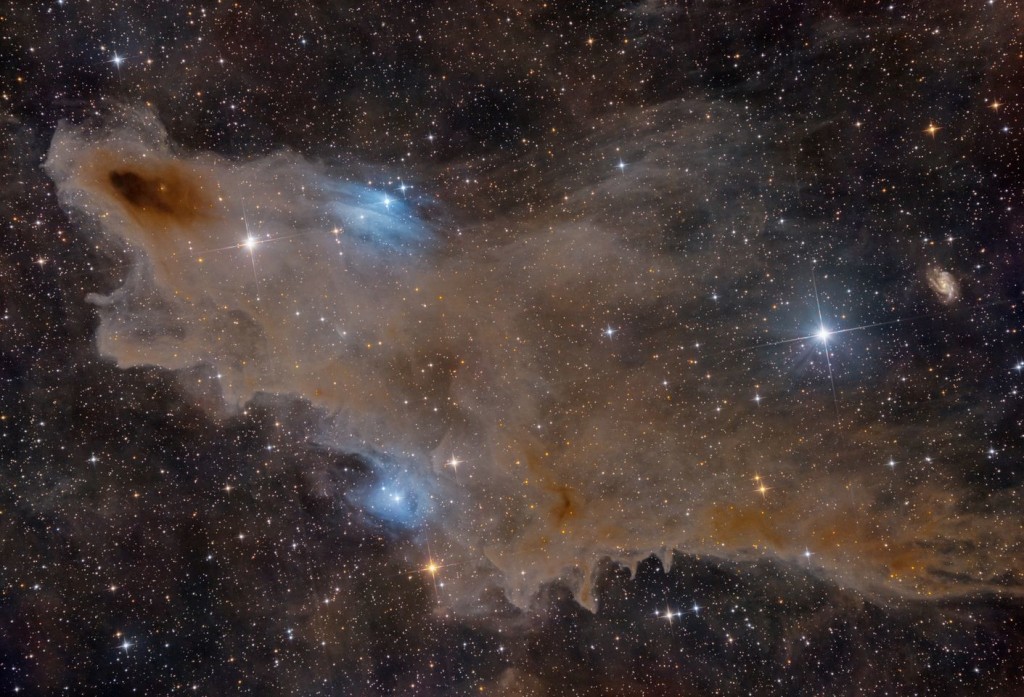 Q4: Except for astrophotography, do you have any other hobbies? What connections between them?

I am an avid on and off-road motorcyclist, and a mountain biker, and I volunteer to advocate for and build trails on public lands.

My wife and I have toured several other countries on motorcycles. It was especially interesting to see the sky in the Southern Hemisphere when we visited New Zealand. I didn’t recognize anything, it was so foreign! I think we take for granted how intuitive the sky can be.

I worked professionally as a bicycle mechanic for many years, and my understanding of small mechanical things that I gained doing that makes some aspects of astrophotography very intuitive.

Q5: Who has been inspiring you all the time?

I grew up watching Carl Sagan’s “Cosmos” on television. He and his wife Ann Druyan are amazing humans. His letter to Chuck Berry acknowledging the inclusion of Chuck Berry’s recording of “Johnny B. Goode” on the Voyager spacecraft is one of my favorite artifacts.

Q6: From grades one to ten, how would you rate your love for astrophotography?

I haven’t missed a clear moonless night of imaging in ~3 years, so I suppose I am pretty obsessed. That said, I see work from people shooting narrowband and investing significantly more time and money than I do, and I realize my commitment is less than many. I’d say I’m an eight.

Q7: What gear do you use, any photos of them?

I have three telescopes, a Sky-Watcher Quattro 250P Newtonian Astrograph, a Stellarvue SVX080T-3SV APO Triplet refractor, and a Celestron C9.25 Schmidt-Cassegrain. I pair these with various reducers/flatteners/coma correctors as appropriate. My favorite reducer/correctors are made by Starizona and I have their Nexus .75x for the Quattro, their .63x SCT Corrector IV for the Celestron, and their Apex ED .65 for my Stellarvue refractor. I really like fast focal ratios for capturing as much light as possible.

With the occasional exception of my Pentax DSLR for widefield/single-shot images, I pretty exclusively use ZWO cameras. As I mentioned, for my main interest, DSOs, I use the ASI2600MC Pro. I guide with an ASI120MM Mini, but I think I need to get an ASI174MM Mini for use with the SCT and my off-axis guide since I sometimes struggle to find guide stars. I use an ASI290MC when I do lunar and planetary imaging, which is pretty infrequent these days. I am a big fan of the quality, affordability, and support behind the ZWO products. I think ZWO has really helped to make astrophotography accessible to more people because of the reliability and price points of their products.

My mount is a Losmandy G11G2 which I chose because of its long-standing place as a premium mount at a reasonable price with good support and serviceability. Also, it has a pretty high load capacity, which makes it less probable that I will wind up trying to put too big of a telescope on it. 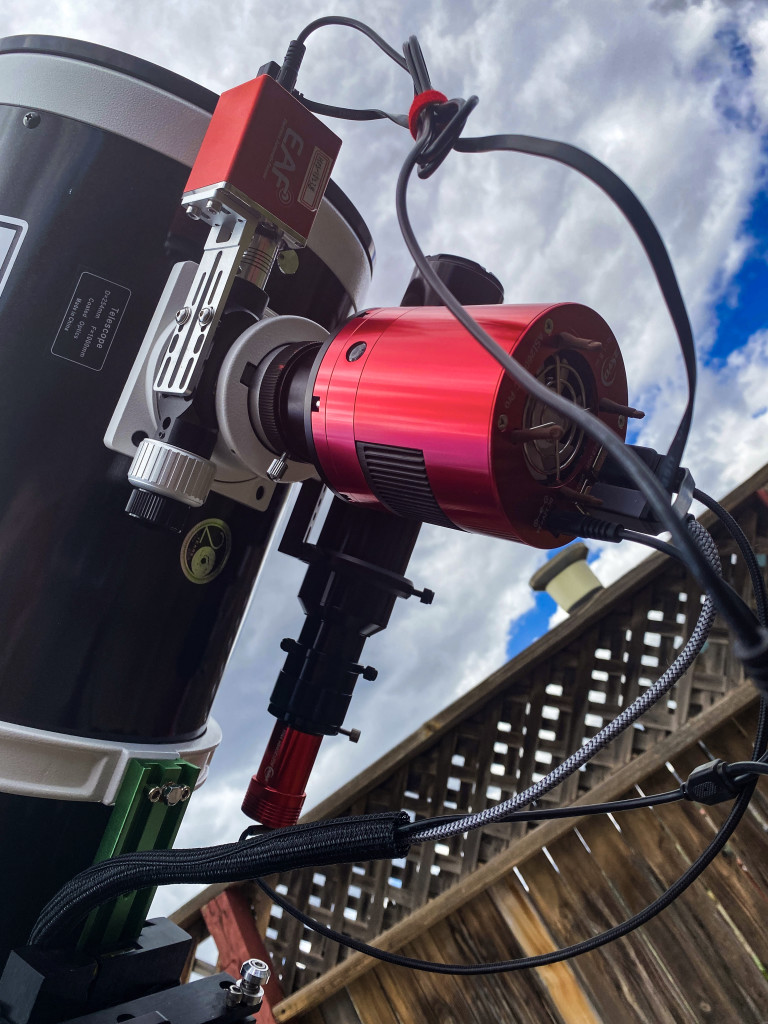 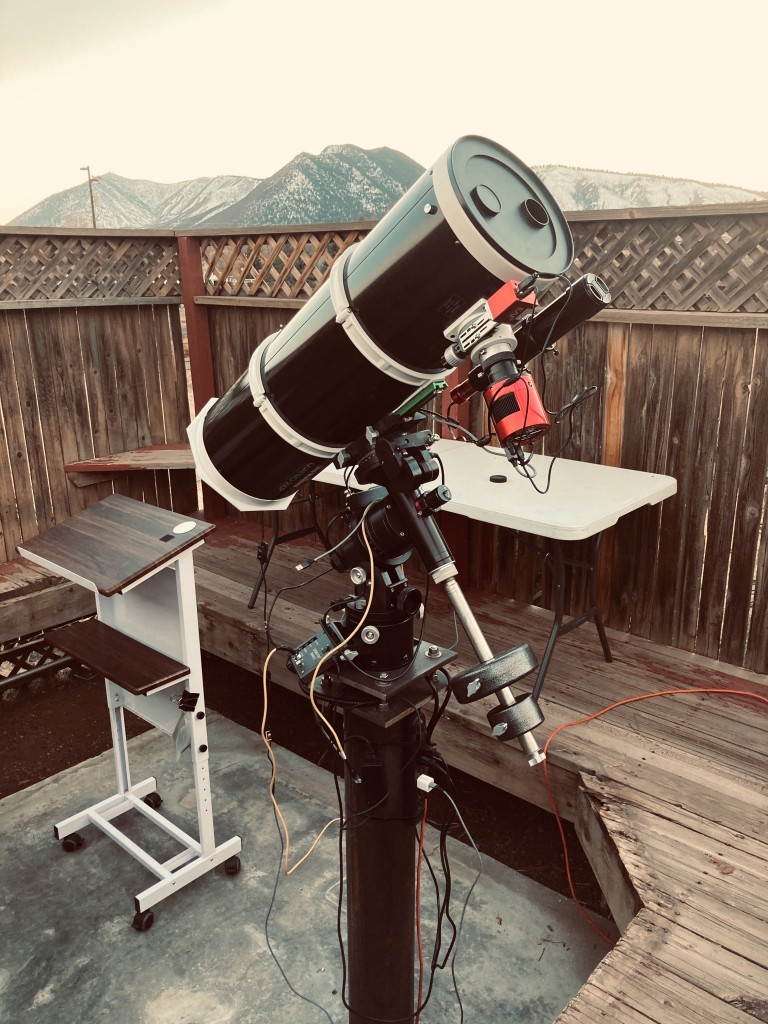 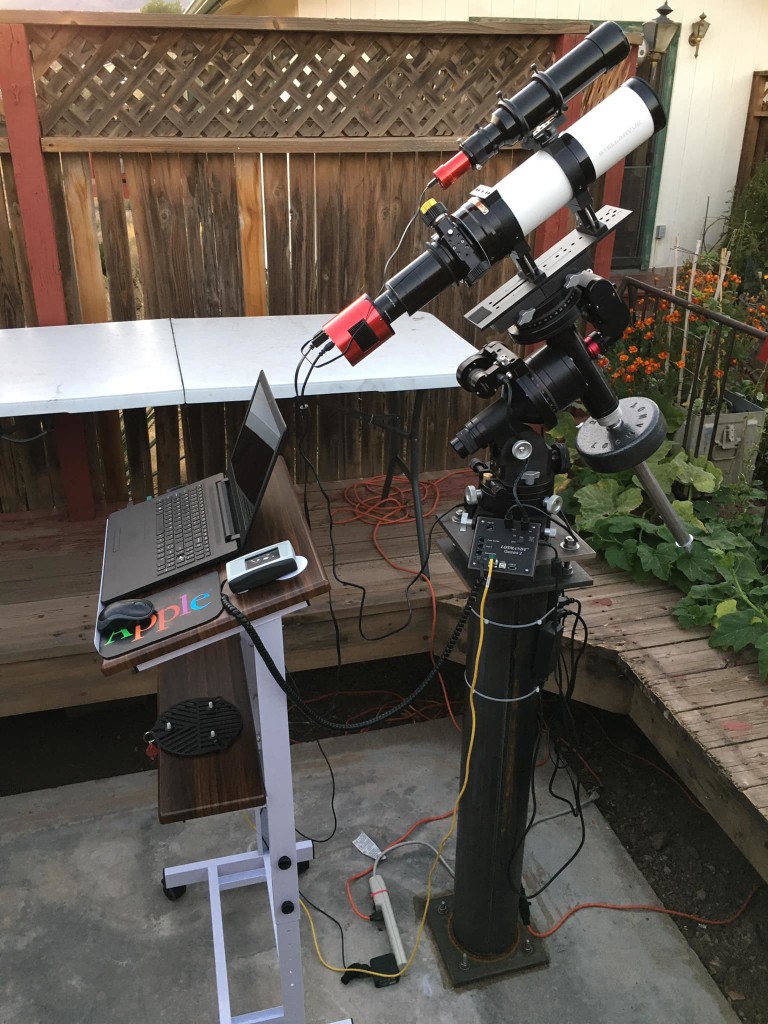 Q8: Where do you usually take astrophotos, somewhere remote from home or just in your backyard?

I had a pier made that I then bolted to a concrete slab that used to house an unused hot tub in my garden. I shoot everything from there. The skies at my house are Bortle 3-4, and I measure ~21.4mag/arcsec2 with my Sky Quality Meter. This is a great asset since I don’t need to use filters and I can still capture fine dust and dim objects.

Q9: Do you often discuss astrophotography with your family or friends? Will they join you on the imaging nights?

I mostly just like to show people images and tell them a few things about the object, size/scale/distance, what the object is made of, (ionized Hydrogen or Oxygen, for example), and who discovered it. When people ask how I took the pictures, or what goes into the capture, I usually ask, “How detailed do you really want me to be?” It’s pretty easy to go off on a tangent trying to explain pixel rejection or how integration time works to reveal details, (poorly explain in my case I think!)

Astrophotography is a pretty solitary pursuit, but I do like sharing the results with people to help them better appreciate the beauty and enormity of the universe. 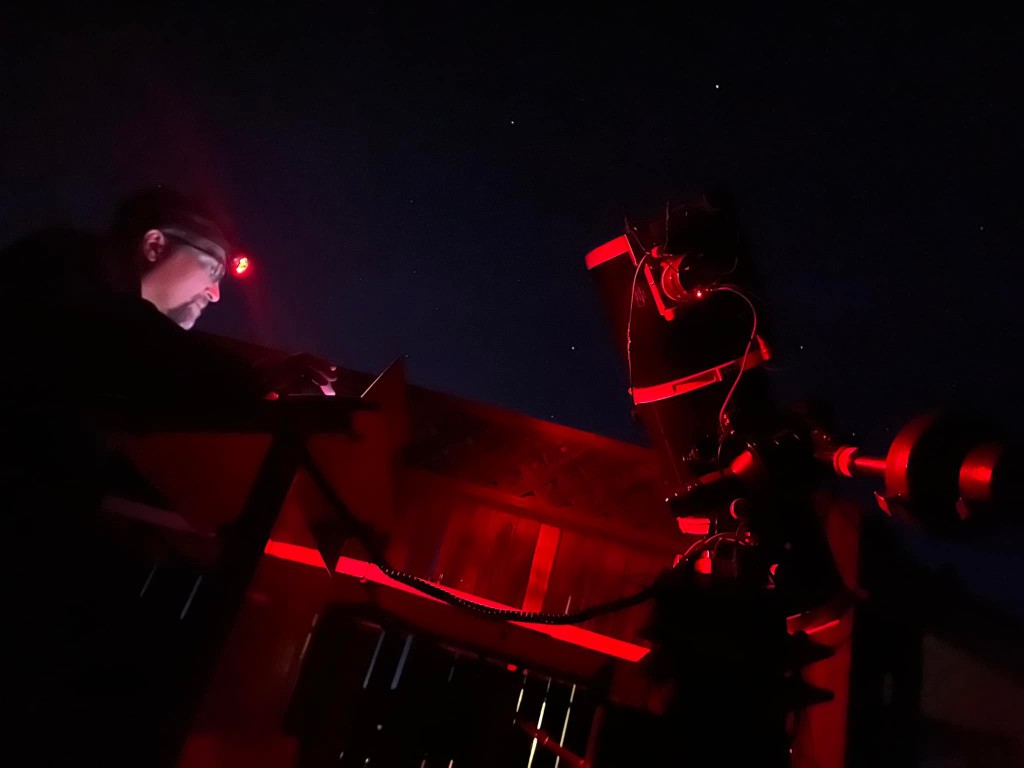 Setting up in the dark

Q10: What do you think astrophotography has brought to your life? Does it change you in any sort?

I really enjoy the challenges of getting the mechanical and data to capture working, coupled with the processing, to reveal things that I can’t see.

It is an interesting dynamic that, although it is fun to make an image that is recognized by friends and family or peers and mentors in the astrophotography community, it really doesn’t matter except to me for my own enjoyment. I don’t get paid for the results, nor do I intend to be paid.

I think that this view is inherent in watching the universe through our cameras. As Dylan O’Donnell says, “Remember, everything is meaningless and we’re all going to die.”

That noted, please go to my Astrobin page and like my images. I live for that validation!
https://www.astrobin.com/users/AnthonyQ/

Q11: Astrophotography has been through a deep revolution in the last decades. Do you have any thoughts about this to share with us?

I think that the technology that enables success in capture and processing has become far more accessible in recent years.

Compare the level of frustration of freezing in the dark while
manually guiding, often over multiple nights, cryogenically and chemically pushing film processing, all to find out that your image came out poorly for myriad possible reasons.

Even 10 years ago the options for guiding software, cameras, mounts, processing software etc., were far fewer, often much more expensive, and much more complicated and, with less accessibility to experts and mentors.

Q12: What are the most important keys for you to choose an astronomical dedicated camera?

First and foremost for me is the ease of use and consistency in results. Especially since I like to capture a lot of data for my images, every minute is precious. If I have to spend a lot of time troubleshooting why my equipment isn’t working, that is a lost opportunity.

I especially like that newer cameras are extremely efficient with high QE and low noise. This acts as a force multiplier with long exposures, like my F/3 Quattro-Starizona Nexus set-up. It’s kinda like “free” data.

Q13: When and how did you know ZWO? What was your first ASI camera?

ZWO is certainly one of the most visible brands on the market. My first ZWO camera was my ASI120MM Mini since I was moving into guiding my Pentax DSLR on a couple of different scopes on my Losmandy mount.

My next ASI camera was a 290MC since the DSLR really didn’t cut it for planetary and lunar imaging at all.

My last attempt to use my Pentax for DSOs was while imaging the Ghost Nebula, Sh2-136, in the summer. The warmer temps and long exposures with the stock camera really ruined my ability to draw out the dark dust in this object because there was so much noise. Shooting consistent Dark calibration frames as evening temps drop is really untenable. This was an indication that I had outgrown the DSLR, and ZWO had come to market a bit less than a year earlier with the ASI2600MC Pro, which was really a great improvement on the ASI071MC Pro, their earlier offering in an APS-C sensor camera. I am extremely happy with the results I get from the ASI2600 MC Pro!

Q14: What new ASI products do you expect?

Maybe a cam with better than 100% QE?
I really think I need to get a 174MM Mini for guiding with my OAG. I saw that there is a 220MM Mini coming out. Maybe that will have enough sensitivity and FOV at a lower price than the 174?

I am excited that nebula season is back. I have Cave Nebula as my next object planned, then Angel Nebula, and then NGC1999 with my SCT. Hopefully, I have plenty of clear skies!