Bogdan Borz is the winner of ZWO 2020 ASIWEEK #38. His work “NGC 7822” taken from a Bortle 8 area combined SHO and LRGB date and got a very impressive result! To know how he captured the image and how he started astrophotography, here we made an interview with this great astrophotographer:

Hello. Thank you for this invitation and for the honor of selecting my image as ASI Image of the Week. My name is Bogdan Borz, I am 39 years old and I was born in Romania. I currently live in Toulouse, France. I have been interested in astrophysics and cosmology for a long time, but I discovered astrophotography fairly recently. I have been doing astrophotography for less than two years. I am also interested in philosophy and arts, mainly graphics and painting. And when there is no pandemic on Earth, I try to participate in a marathon race. 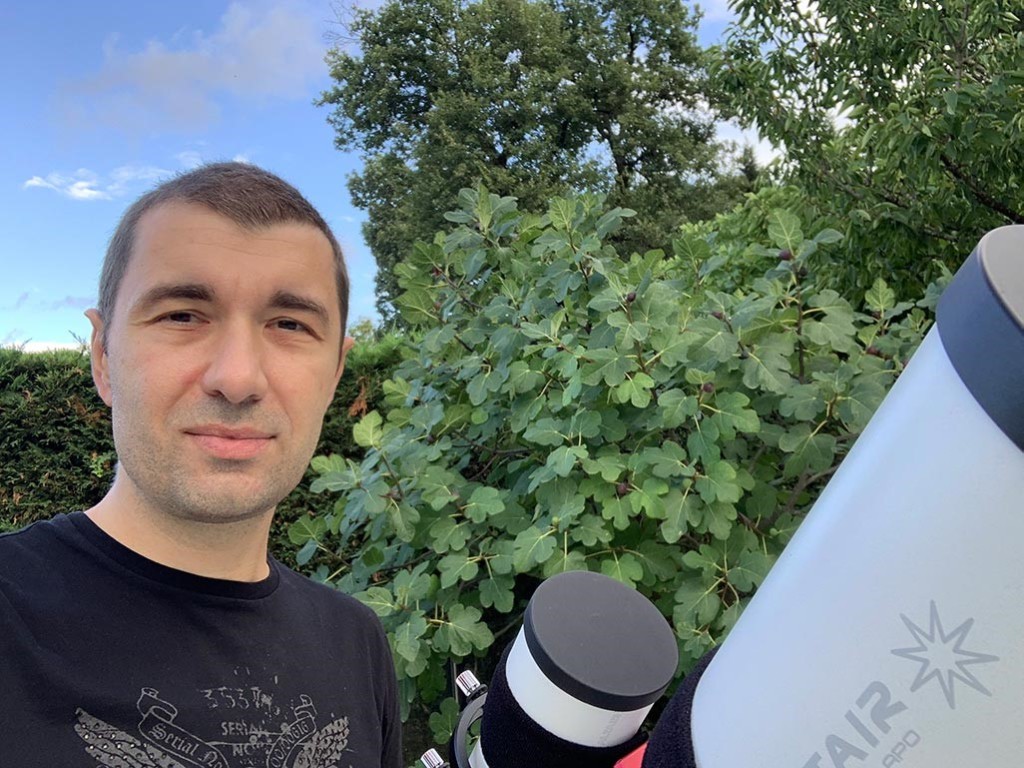 Q2: Why do you love astronomy? How did you start astrophotography?

Astronomy is answering or searching answers for some of the greatest questions one can ask him/herself: what is our place in the Universe? How did the Universe develop? Are we alone? How did it all begin? It starts with Cosmology, but the ramifications are enormous. I fell in love with astronomy before high school. The radio was on and a cultural show started. It was about Steven Weinberg’s book “The first three minutes”. I just stopped and listened to the end. The flow of the explanation of the key events starting with the Big Bang was simply fascinating. And it keeps fascinating me ever since.

I have been trying to recall what was the trigger event that brought me into astrophotography. I think it was after seeing the movie “First Man” in 2018. I looked at the Moon and bought a small telescope, took my first lunar pictures. I had absolutely no idea what amateurs can do from their backyards. It took only a small step to enter into deep sky territory. 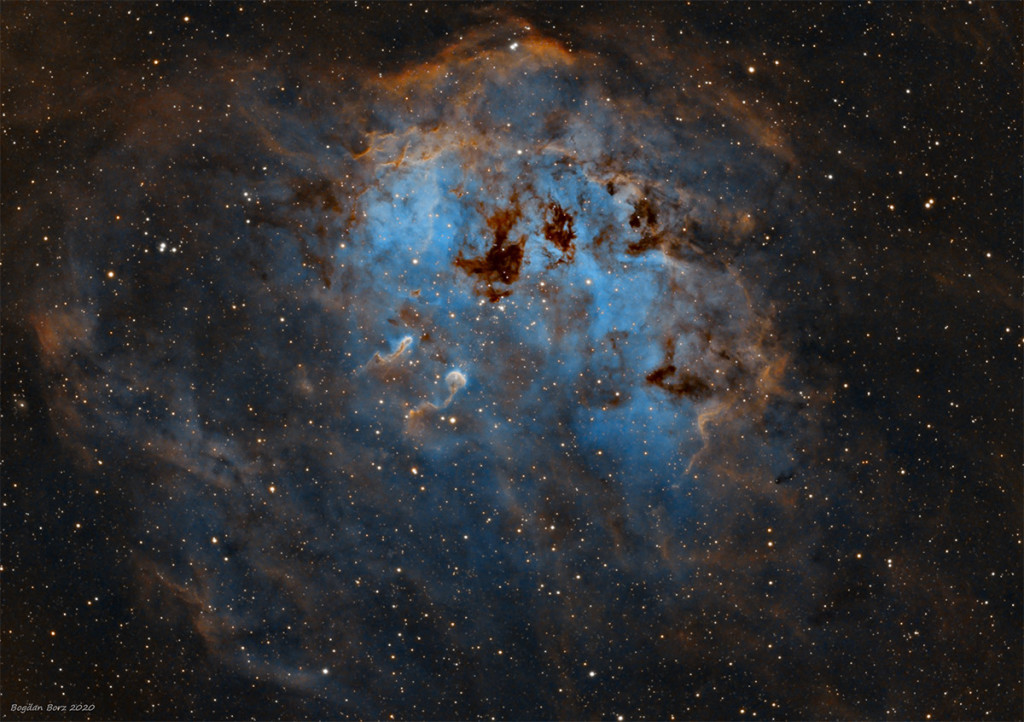 Q3: What setup do you use? Can you show us some images?

I currently use 3 setups: 1) The Altair AstroWave 115 ED refractor, with a 1x or 0.8x flattener, the ASI1600MM Pro and the 36mm ZWO EFWFilterwheel with SHO Astrodon filters and LRGB ZWO filters. 2) For higher resolution and longer focal, I use the ONTC 250mm F4 Newtonian, with the ASI1600MM. The refractor is guided with the Altair 60mm scope and the Newtonian with the ZWO OAG coupled with ASI120 mini (a better solution than the guidescope at this focal length). 3) For lunar and planetary images, I use a Skywatcher Maksutov 180mm with the ASI 290mm and pretty soon the ASI 224mc. All on AZEQ6R-Pro. 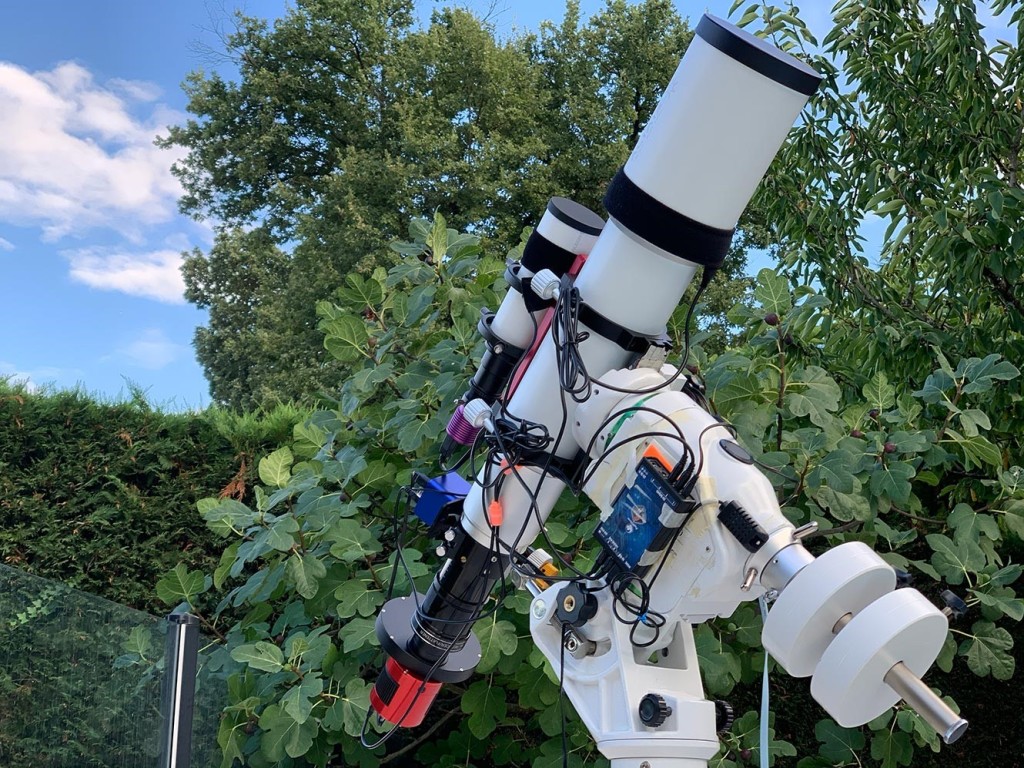 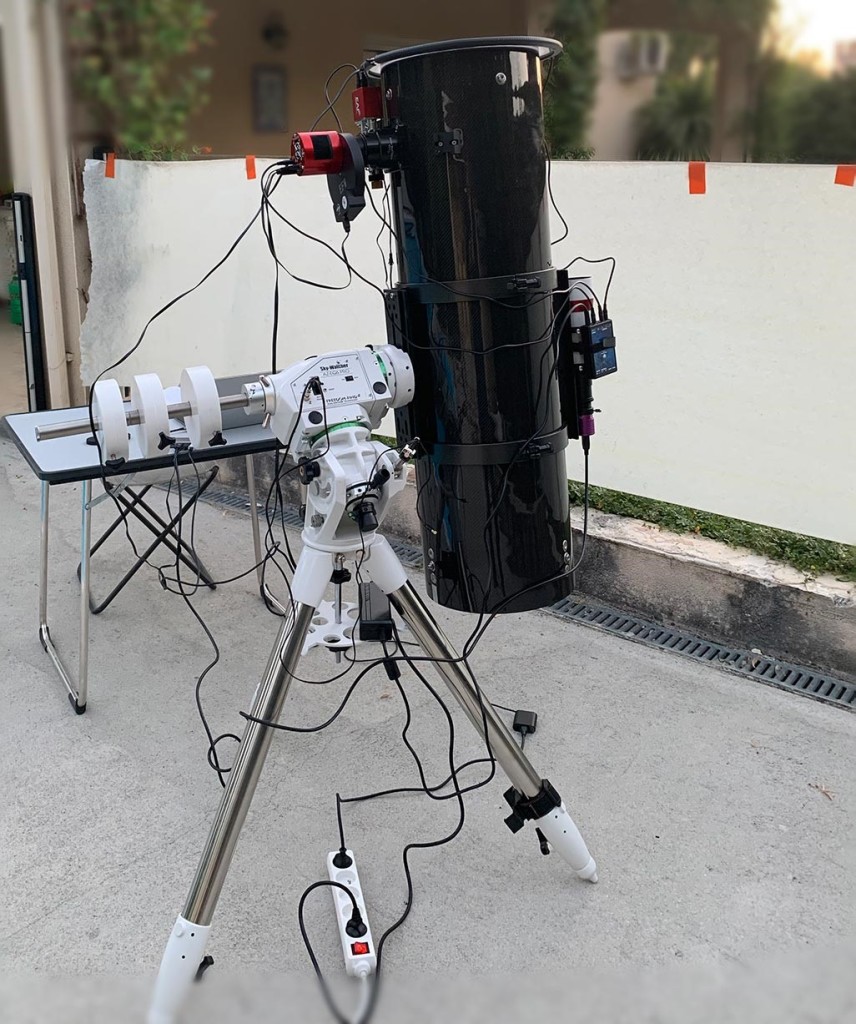 Q4: You winning image NGC 7822 took a total exposure time of nearly 30 hours, can you tell why it took so long?

I shoot from a Bortle 8 zone, so obtaining a satisfactory signal-to-noise ratio requires longer integration time. NGC 7822 is a pretty dark nebula, surrounding the central emission region, so I wanted to obtain enough exposure in order to reveal the details. Patience is really important in astrophotography, since during the acquisition you have no idea how the final image is actually going to look. I had to throw away a few hours of exposure due to clouds and guiding problems. I always blink the images in Pixinsight and weigh them in function of their quality in order to draw the best out of the data. 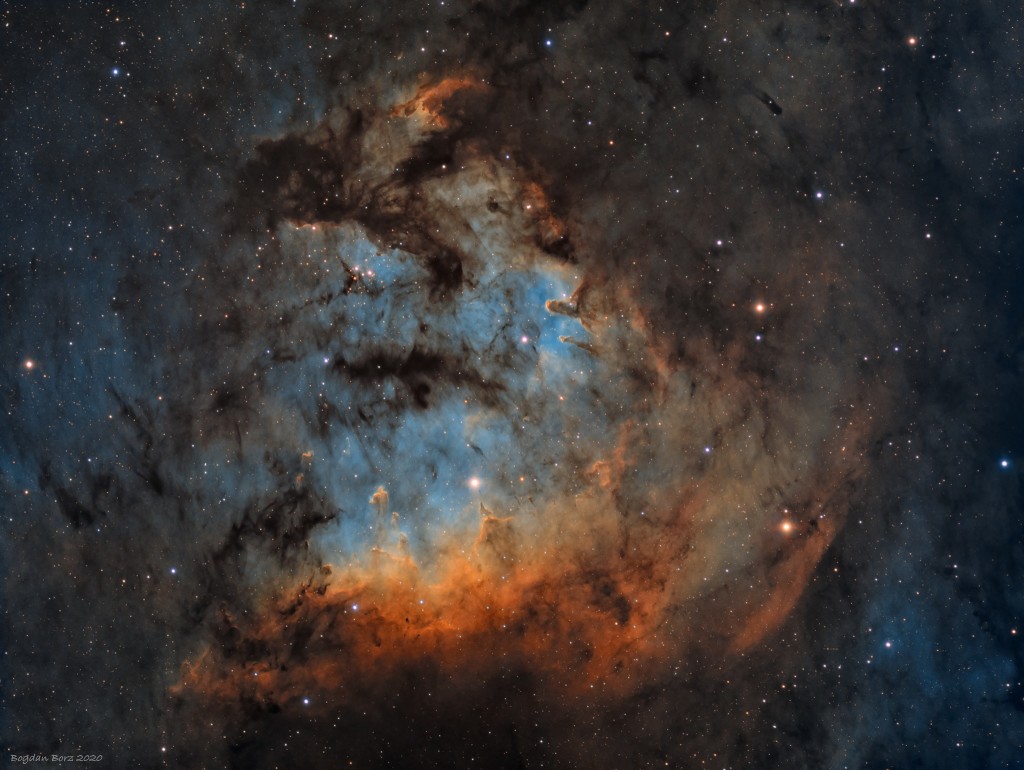 Q5: What kinds of targets do you photograph or love most?

I love nebulae, they represent so well the beauty of space. I like to shoot in SHO, using the Hubble palette. RGB targets are very difficult from the city due to light pollution, but I managed to image some galaxies this year. 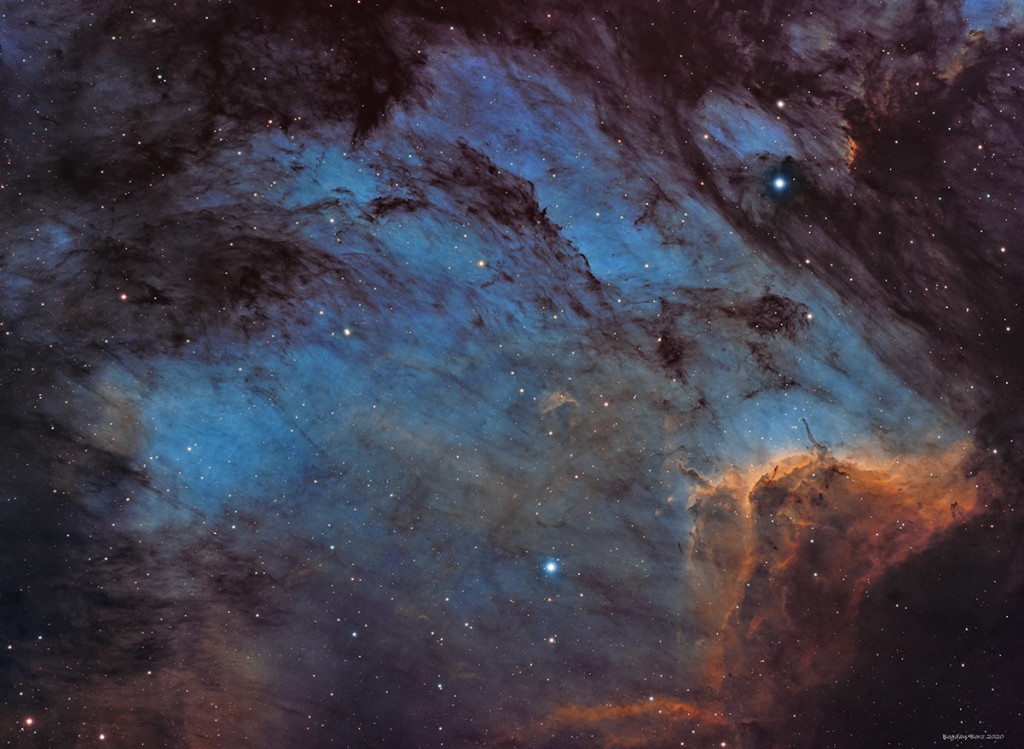 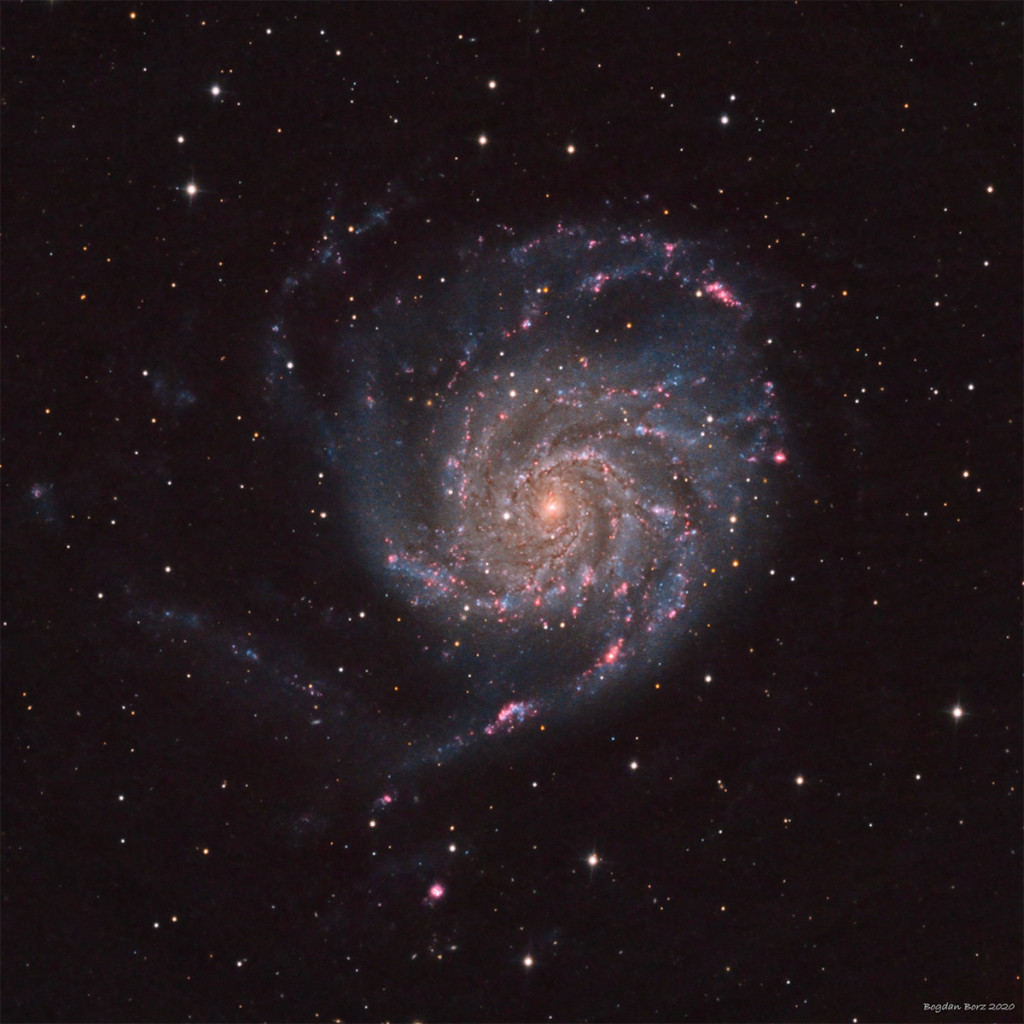 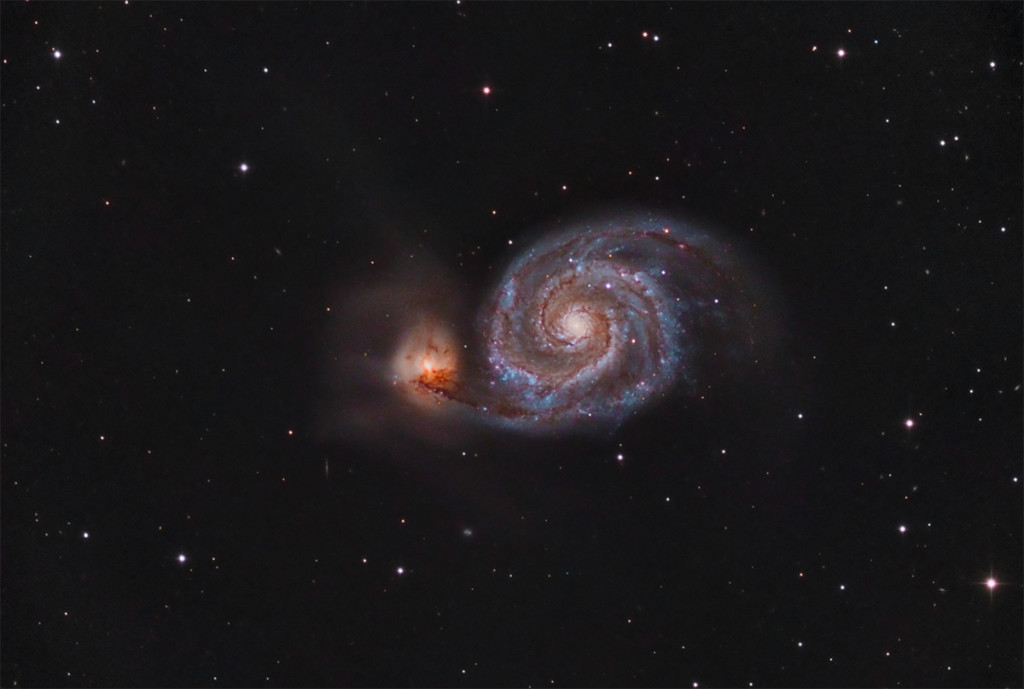 Q6: We know astrophotographers often travel long away to dark places for photographing. Do you ever have that experience? Any interesting & unforgettable stories that can share with us?

The Pyrenees Mountains are not very far so I like to shoot from there when possible. A really memorable moment was during the winter when I started astrophotography. I found a plateau in the Pyrenees during the day, with a wonderful panorama and an open viewpoint. I decided to come at night to shoot the Milky Way! (not the best time of the year, but I was a beginner…) The view was spectacular, with Orion and Cassiopeia dominating the dark sky. I was totally alone in the dark and everything was silent. I had to leave my car at the bottom and carry the equipment. Then I remembered that there are bears in the Pyrenees, so while installing my gear, I was imagining solutions if any curious bears showed up. I ended up shooting the Milky Way (or some distal part of it) and listening to Pink Floyd under the starry sky, surrounded by the mountains. No bears visited and I believe Pink Floyd had nothing to do with it. 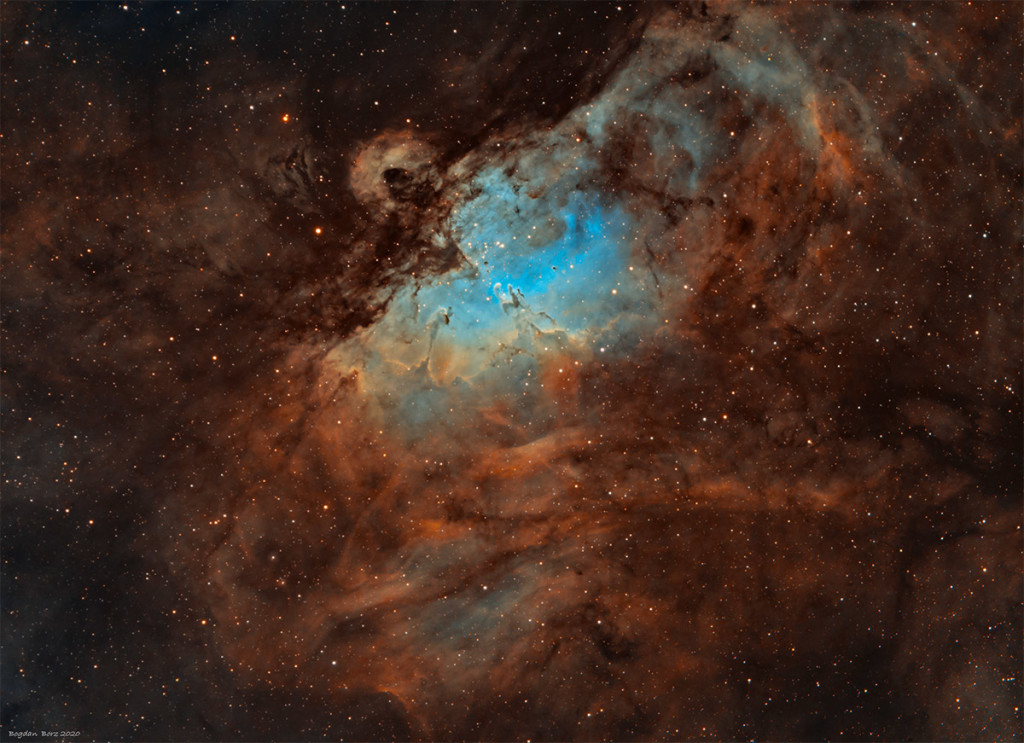 Q7: What do you think is the most difficult part of post-processing? How do you achieve the balance between authenticity and aesthetics?

I think the most difficult part is obtaining the correct tridimensional perspective of the object, without sacrificing signal. We are photographing objects that we cannot see; we have no idea what their “real” aspect is. We are actually constructing the object while processing it. Excessive sharpening can produce a contrasty, but flat perspective image, while noise reduction can blend areas of signal into one and we are misrepresenting data. I believe that the balance is set by a minimalistic attitude, we have to remain faithful to our initial impression when we first see the integration in the linear state. The aesthetical part is produced by the beauty of the palette (in SHO especially) and by preserving the delicacy of the structures in the image. We must not forget that we are dealing with molecular clouds, not solid structures. Preserving the transparency of the clouds contributes to the beauty of the nebula. 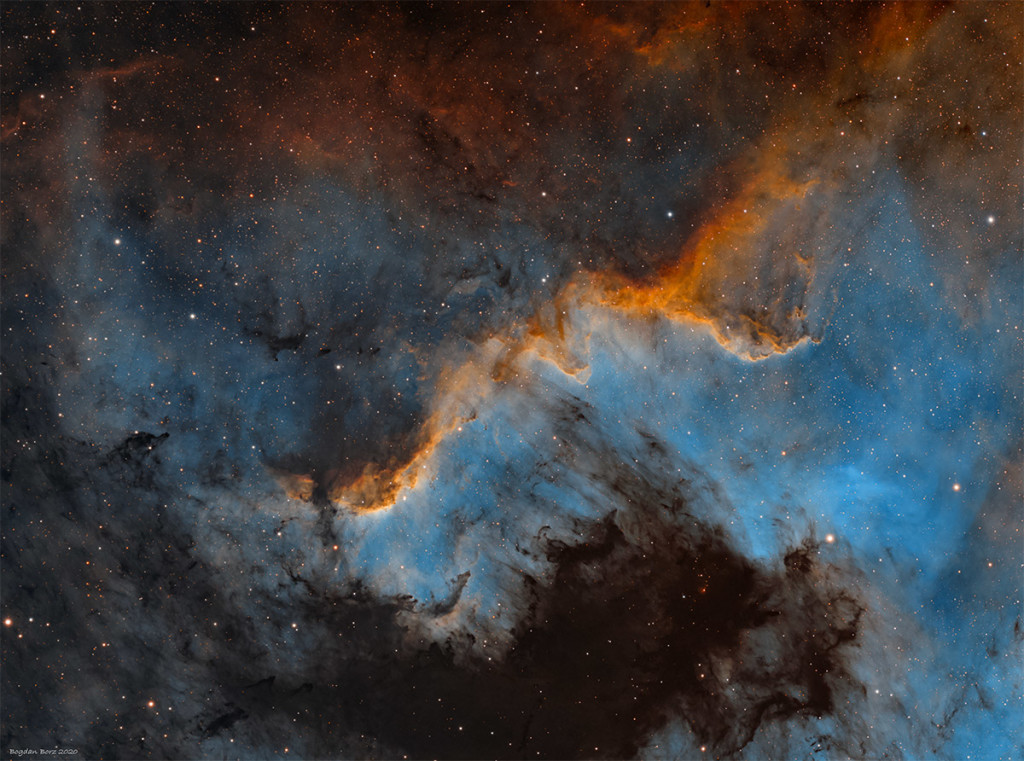 Q8: If you are asked to choose 3 words to sum up your experience in astrophotography over these years, which 3 words will you use and why?

Beauty. Amazement. Frustration. The sky is incredibly beautiful. We, as modern humans, forgot to look up. We can barely see the stars from our cities. Observing under darker skies or even from the backyard gives us access to splendid object that were always there. I am amazed by what can we are able to photograph, and I consider astrophotography as another way of “seeing” the Universe. It is also probably the most frustrating enterprises I have ever engaged it. Spending hours to prepare and install only to have the clouds roll in. Losing nights at a dark site after carrying all the equipment due to some technical failure. But the images we are able to obtain make it all worth it. 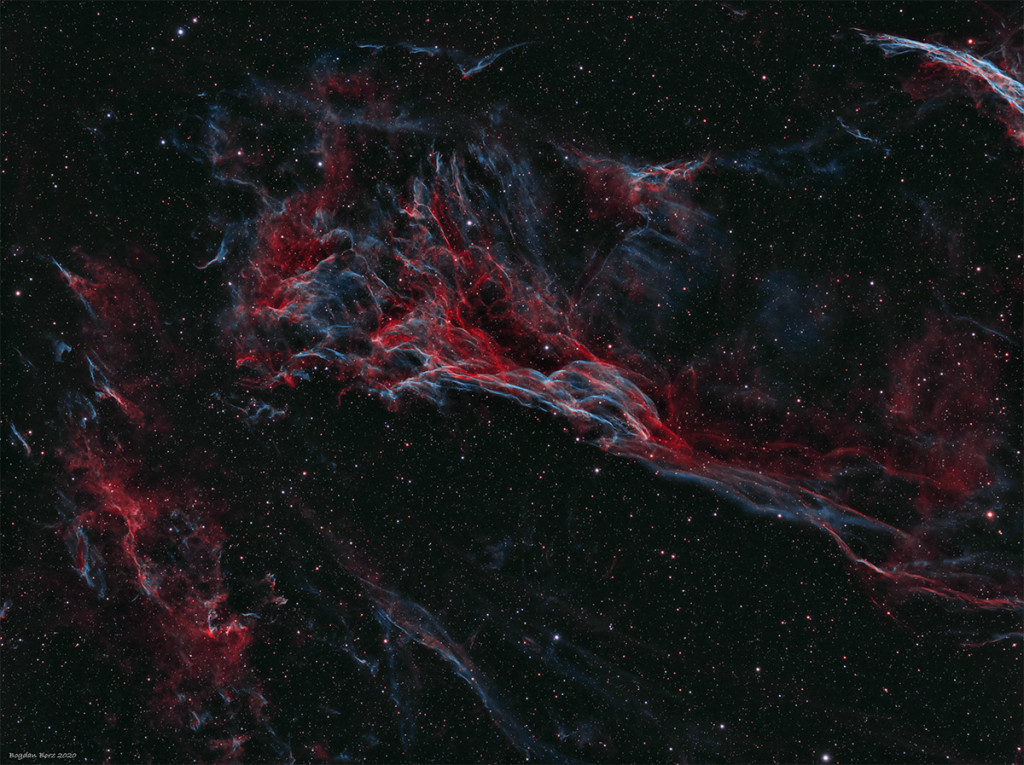 Q9: Do you do astrophotography for fun or for science? Do you have interest in contributing to scientific community?

I do it because it is a blend of art and science. I haven’t participated in a scientific project yet, but I hope to be able to do so one day. Studying exoplanets with the transit method seems the most promising path. 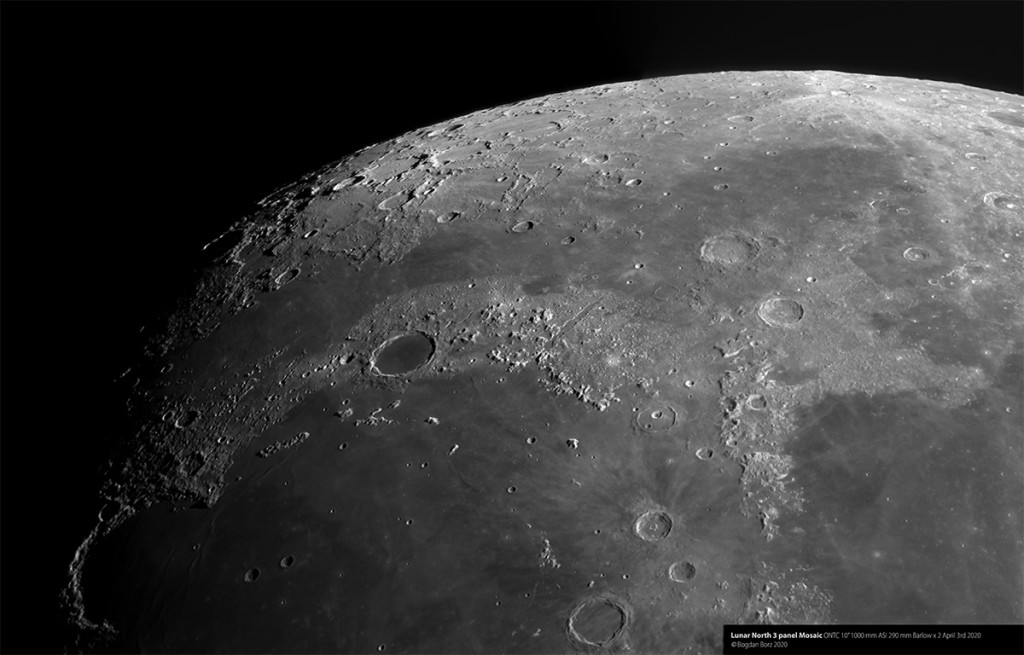 I got the ASI 1600MM a bit more than 1 year ago. Since I was shooting from the city, I clearly had to orient myself towards narrowband. This camera is very popular and used by talented astrophotographers with great results. Coupled with a good price to quality ratio, it was natural choice. It works great with my focal lengths from 644 to 1000mm. 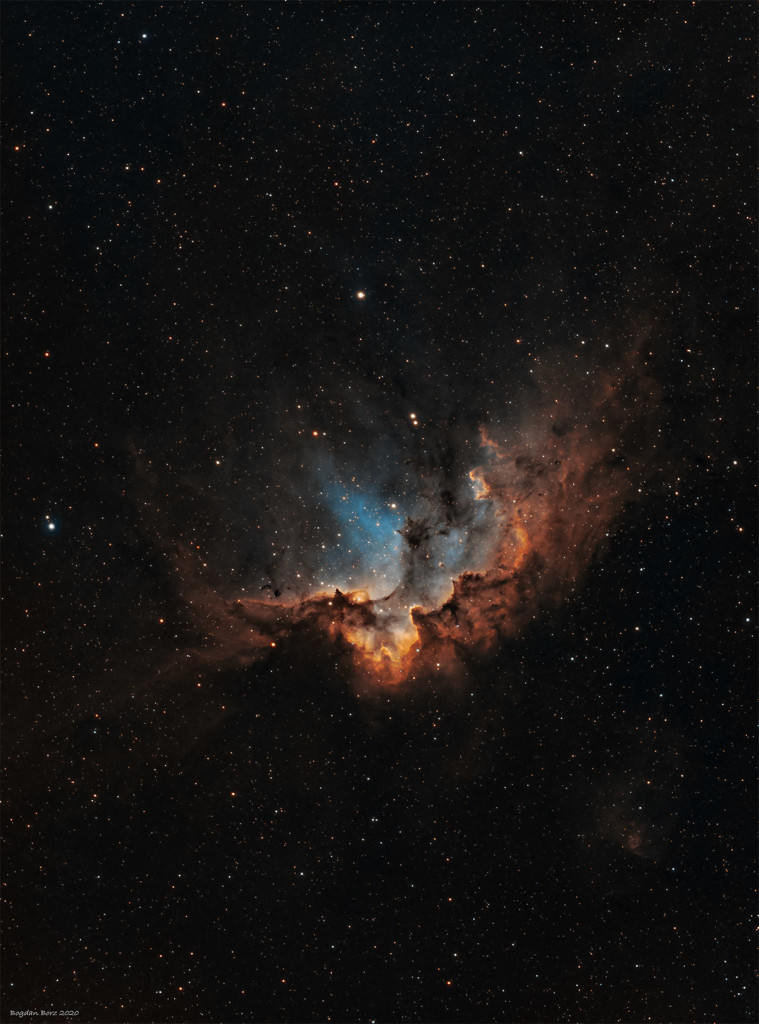 Q11: What kind of cameras do you expect us to develop in the future?

Well, you recently introduced the full-frame CMOS ASI6200 that was missing in the spectrum of mono, cooled cameras. I think 16-bit cameras with deeper full-wells for a high dynamic range would be interesting and useful. 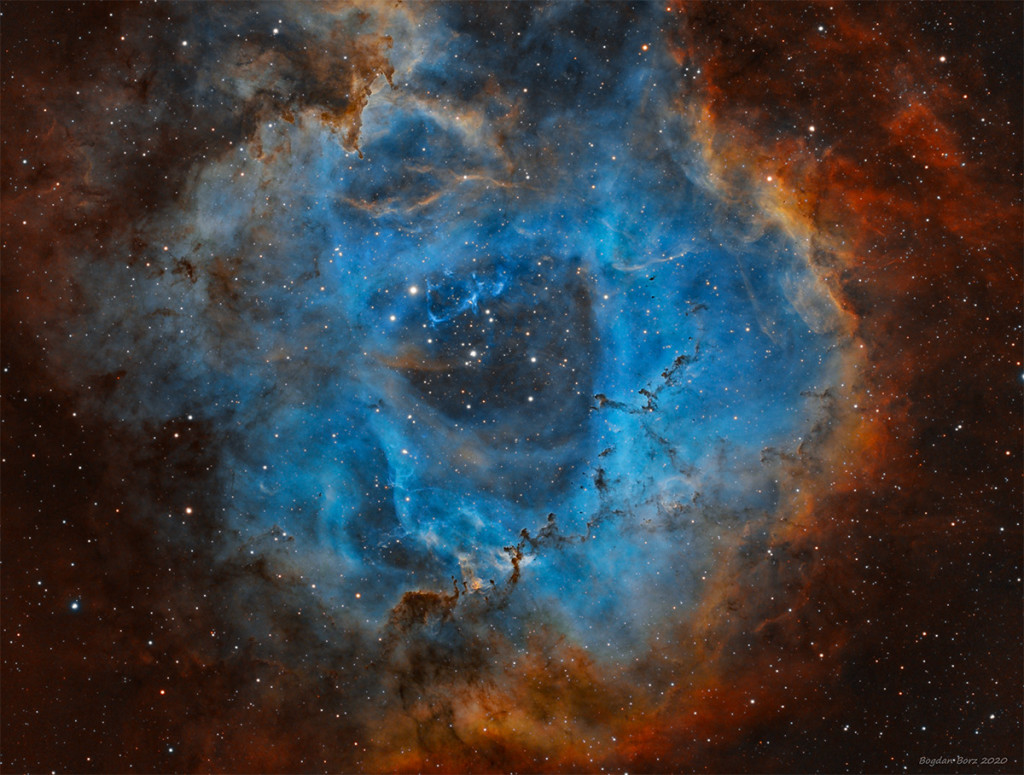 Q12: What project are you working on now? Have you accomplished your astrophotography goals for 2020?

I am shooting the Lion Nebula, a spectacular object, but difficult since the O and S signal are faint. I feel I made significant progress in 2020 and I managed to optimize my workflow, especially with my refractor. One objective on the 2020 list is of course Mars, this opposition is not to be missed. I hope I’ll be able to advance with my planetary imaging. Also, I would like to test the lucky imaging technique for shooting planetary nebulas using my Newtonian and the ASI290mm. It can produce incredible results. 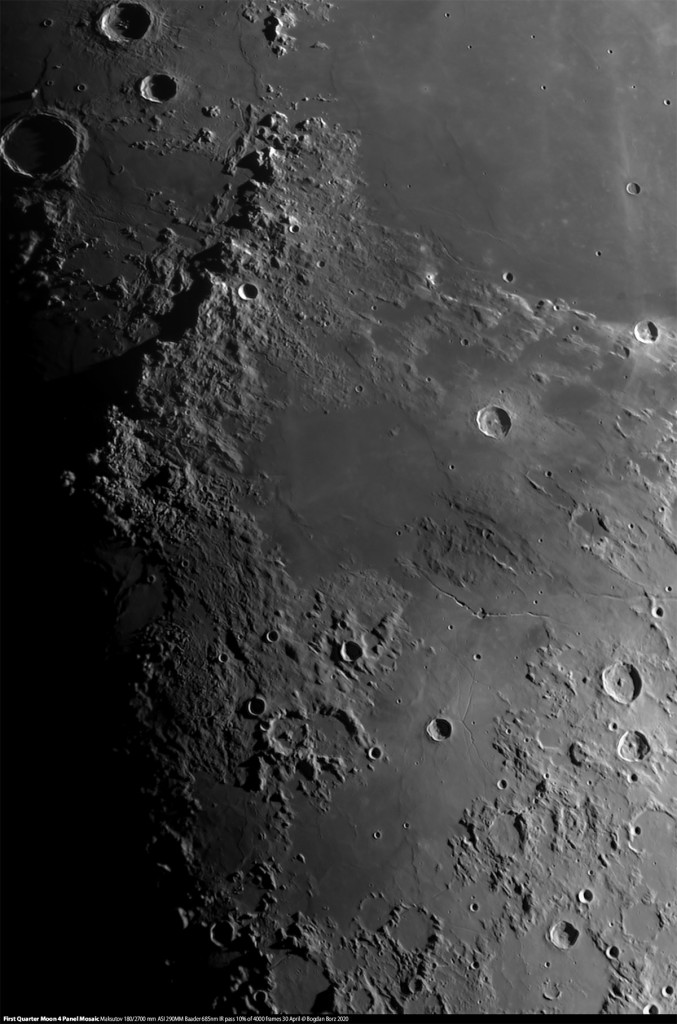 Q13: What feedback or suggestion do you want to speak with ZWO?

I am really grateful for all the possibilities ZWO offers to amateur astronomers. I believe you made a massive contribution to the development of astrophotography by making high quality products affordable. What is truly remarkable is that now one can obtain images using your cameras that can rival with those produced with equipment several times more expensive. The deep sky potential of the ASI1600MM is amazing. Some of the best planetary images were produced with ZWO cameras. I also appreciate the fact that you develop a whole range of accessories from ADC, focusers, camera holder rings and DSLR lens adapters that can simplify our work while exploring space. 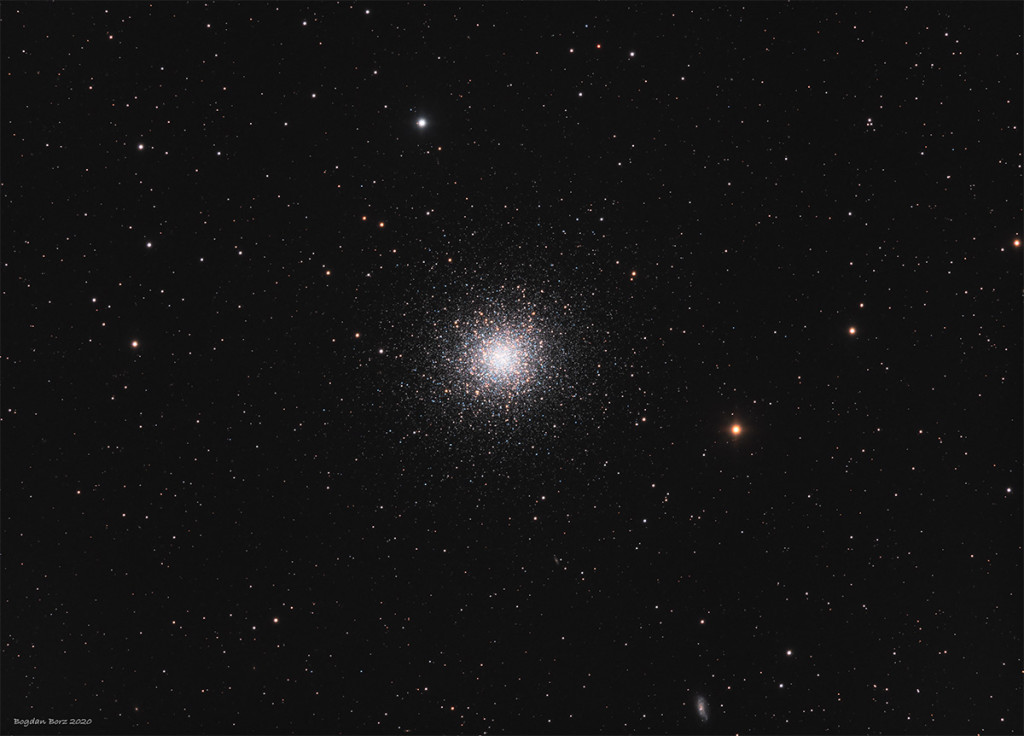