Christopher Sullivan is the winner of ZWO 2019 ASIWEEK #33 and has brought us many extraordinary astronomy photos. To make our ZWOers know this excellent astrophotographer better, we make this interview. Let’s all take a look now.

Thanks! My name is Christopher Sullivan, I’m 38 years old, I work as a translator from German, Danish and Swedish into English and have been doing DSO photography for a little over three years. 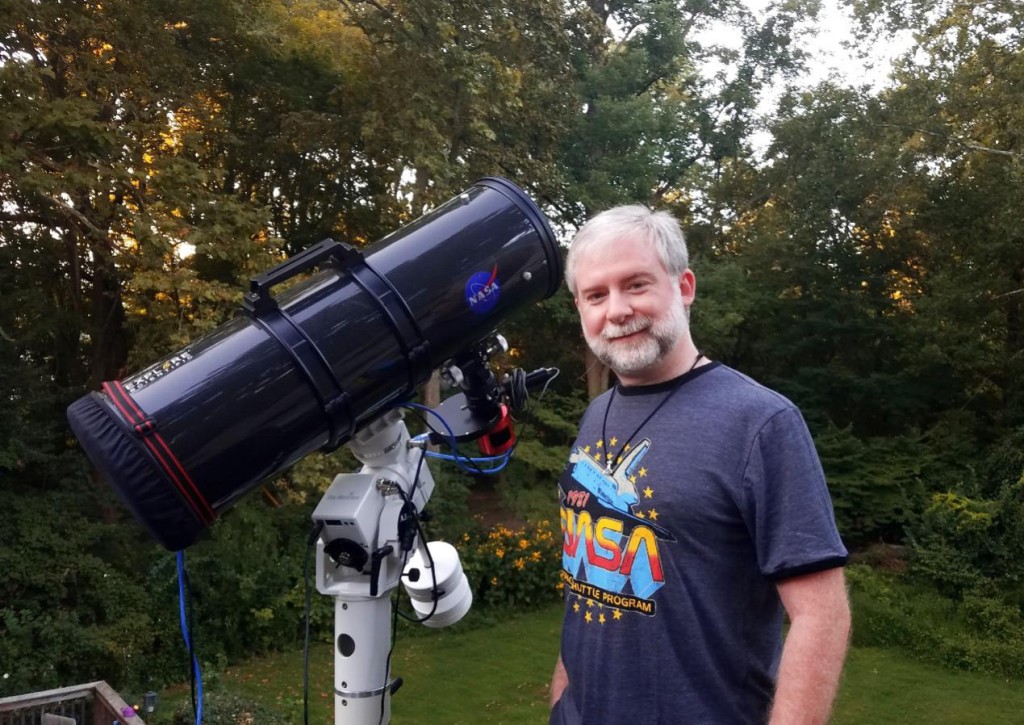 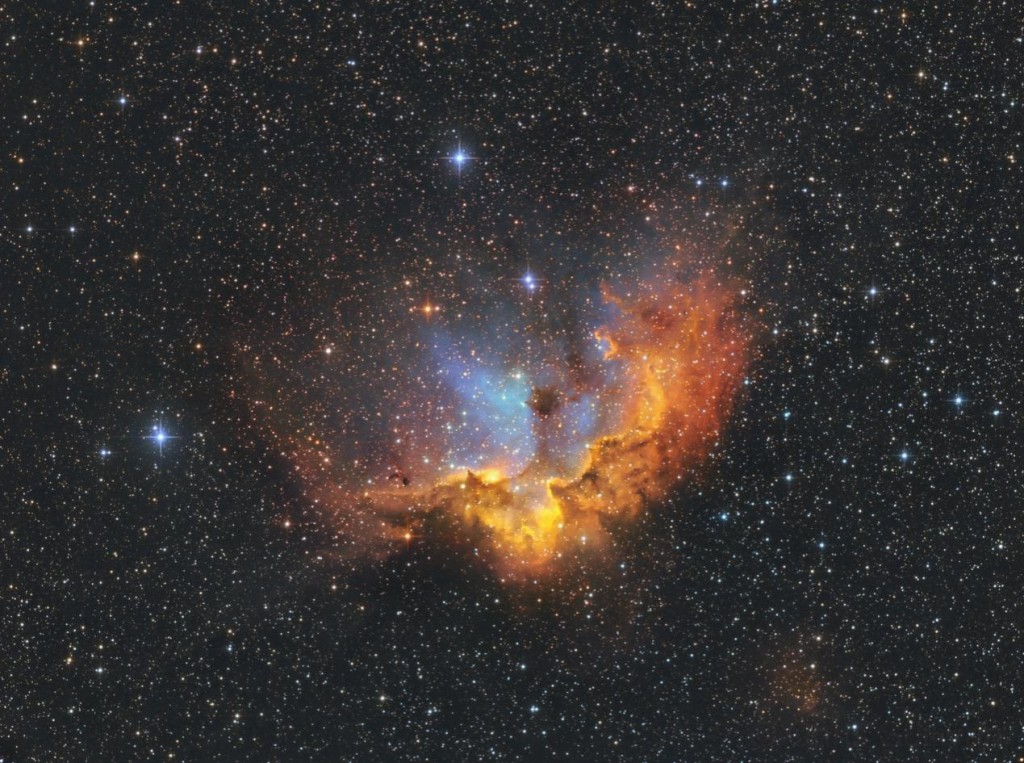 Q2: When did you start like astronomy? And when did you have your first telescope? What’s the feeling in first observing?

I always had a passing interest in space, always loved Hubble images and even took a couple of astronomy courses in college, but I didn’t really get into it until the age of 34 when my daughter (a little younger than 3 at the time, now 7 years old) became obsessed with the moon. She was so interested in it that I thought we should get a telescope so I could show it to her up close. Up until then, I had only looked through a neighbor’s “department store scope” when I was around 12 years old. I ended up getting a 130 mm Newtonian 22 years later and was astounded at how much better the views were from what I remembered as a kid. The moon was just jaw-droppingly beautiful.

For a while, I didn’t know what else the scope was capable of until I read an article about half a year later in which a professional astronomer talked about seeing the rings of Saturn through his telescope when he was a child. I can’t say why, but I had never imagined that my small scope would be capable of showing the rings of Saturn – I just thought I had a ‘moon scope’ and Saturn just seemed so far away. The next night, I went out and found Saturn and I was just astounded. I just couldn’t believe I could see its rings and moons dancing around it from my front yard with my tiny amateur scope. From then on, I was absolutely hooked and everything just snowballed from there. 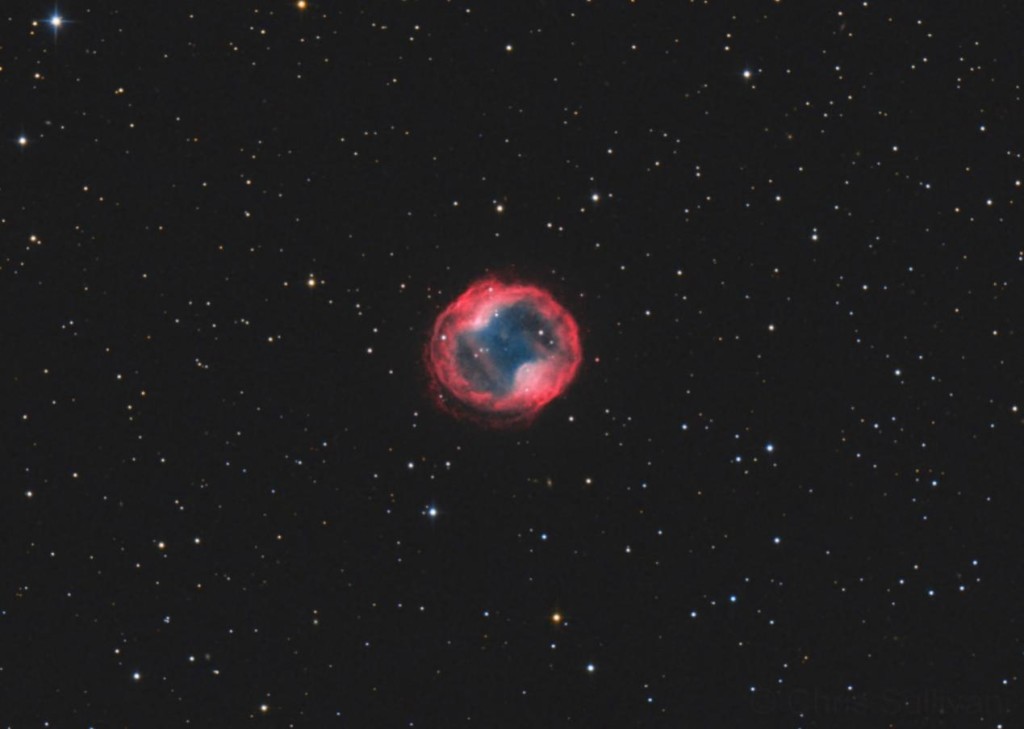 Definitely! It was the Whirlpool Galaxy taken on May 15, 2016. It’s probably the worst stacked and processed M51 anyone’s ever taken, but seeing that first sub was breathtaking! I live only a short distance from Philadelphia, which means I’m under a lot of light pollution. Up to that point, the only DSO I had seen through my scope was M31. I just couldn’t believe that a galaxy that far away could come out so clear and that it was ‘right there’ – right where my scope was pointing. The universe simultaneously felt so vast yet so accessible. I’ll never forget that feeling.

Well, I have to disagree about the dark sky. I know my results would be a lot better if I imaged under dark skies, but for some of us, dark skies are inaccessible. Early on, I was told I should just give up and at one point, I came close to listening to the naysayers, but I then came in contact with an imager who was producing amazing work (including broadband targets) with skies almost as bright as mine and it changed my outlook and approach completely.

For me, the most difficult part is dealing with light pollution and how that impacts the raw data. It often feels like a fight to get rid of gradients and get star color right. The most important part for me is getting good quality data under my conditions – while my light pollution is almost as bad as it can be, terrible seeing is rare, so if my stars aren’t perfectly round with a good FWHM, the sub gets trashed. 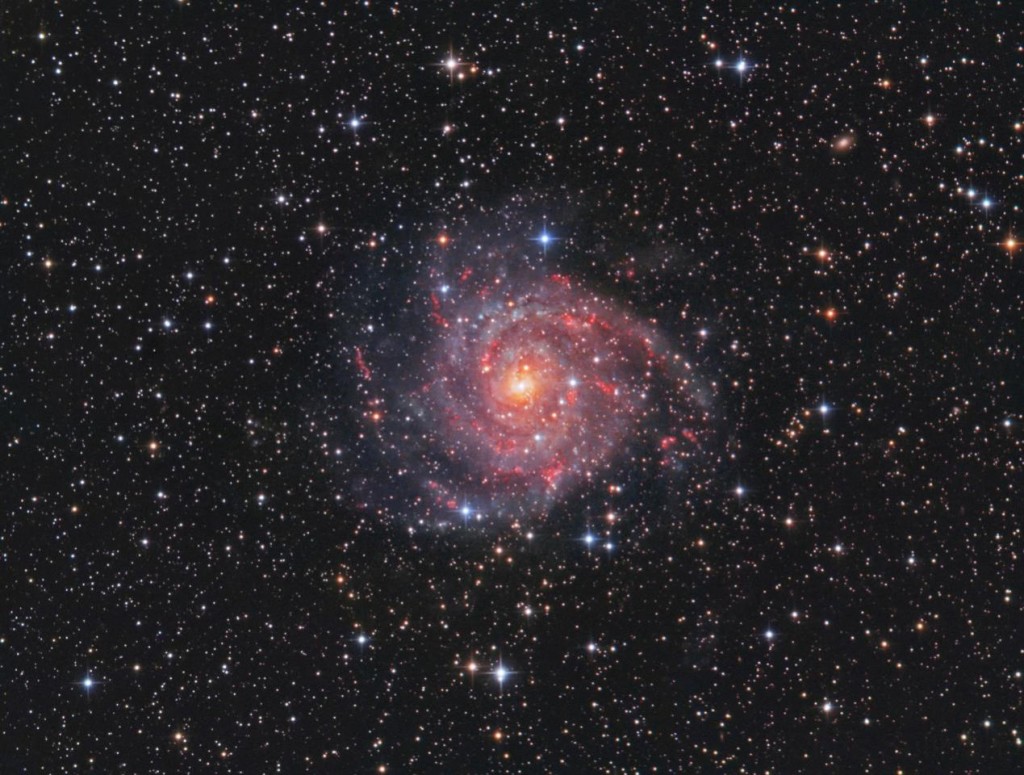 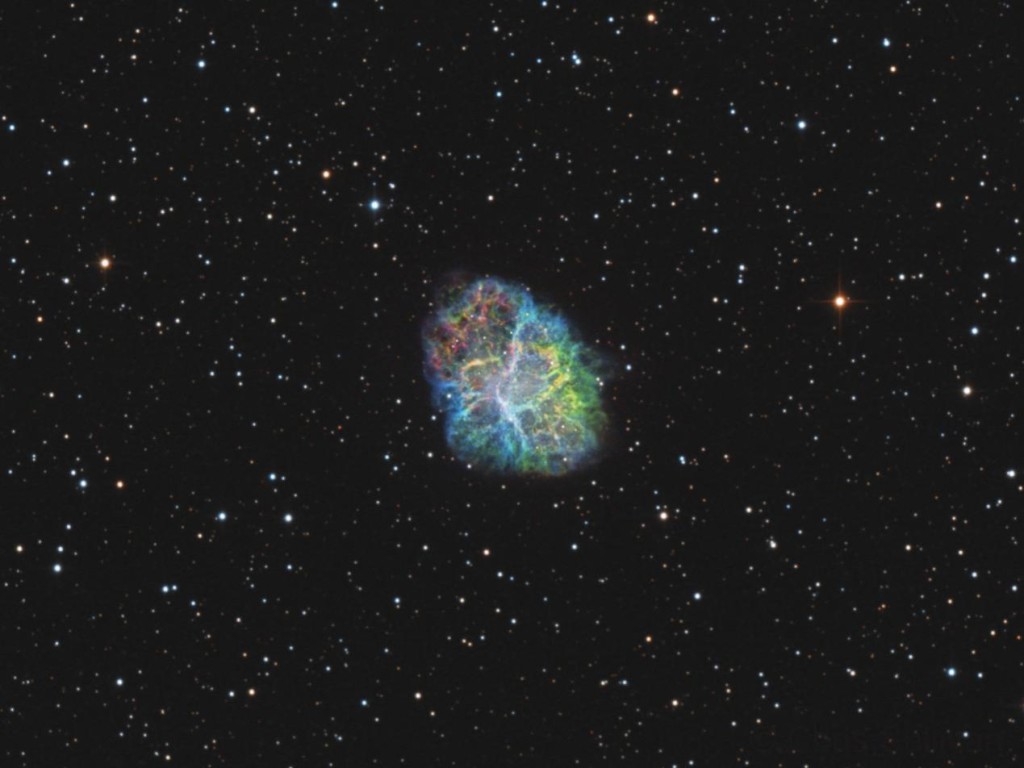 Q5:Astrophotographer usually travel long distances to the darkest places to do DSO imaging, can you tell us about your past unforgettable experience?

I’ve honestly never been under dark skies and so I haven’t had that kind of experience yet. The darkest skies I’ve ever been under were Bortle 4 in northeast Germany. I was shocked that M31 could be seen with the naked eye, as it took me weeks to find it the first time with my telescope from my Bortle 7/8 skies at home. To date, the only DSOs I’ve seen through my scope (not counting star clusters) are M31, M42, M57, M27 and (just recently) M8. I really wanted to view M20 as well, but I couldn’t see it even with averted vision. 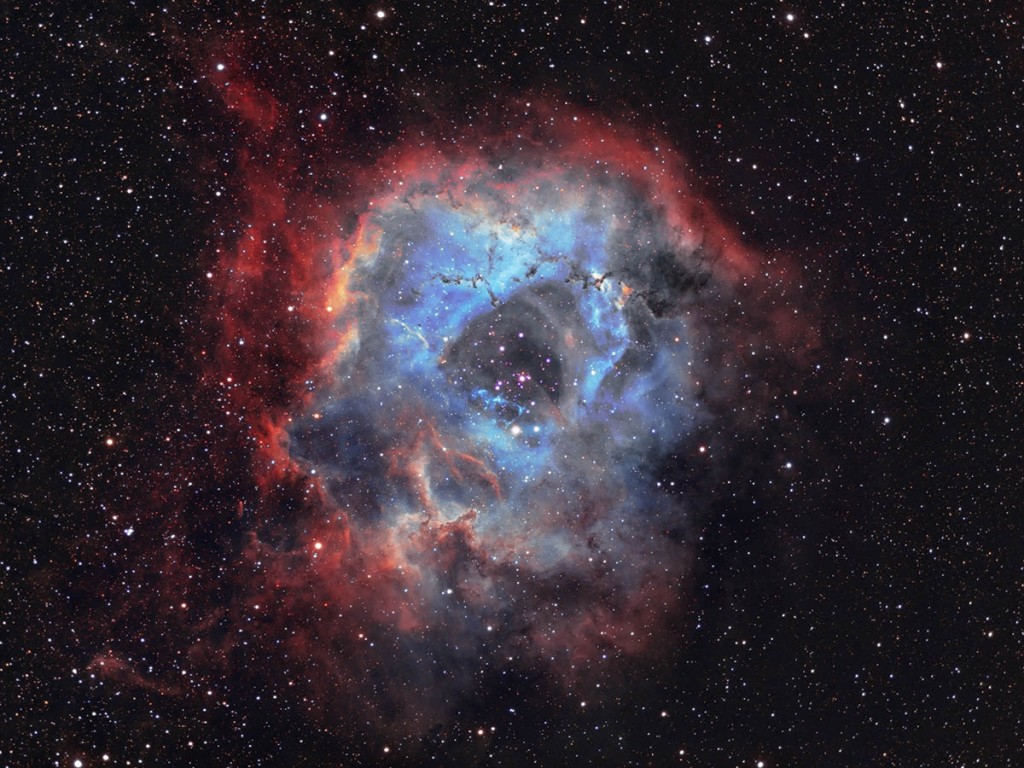 Q6: What equipment are you use currently? Can you show us some images of your setup? 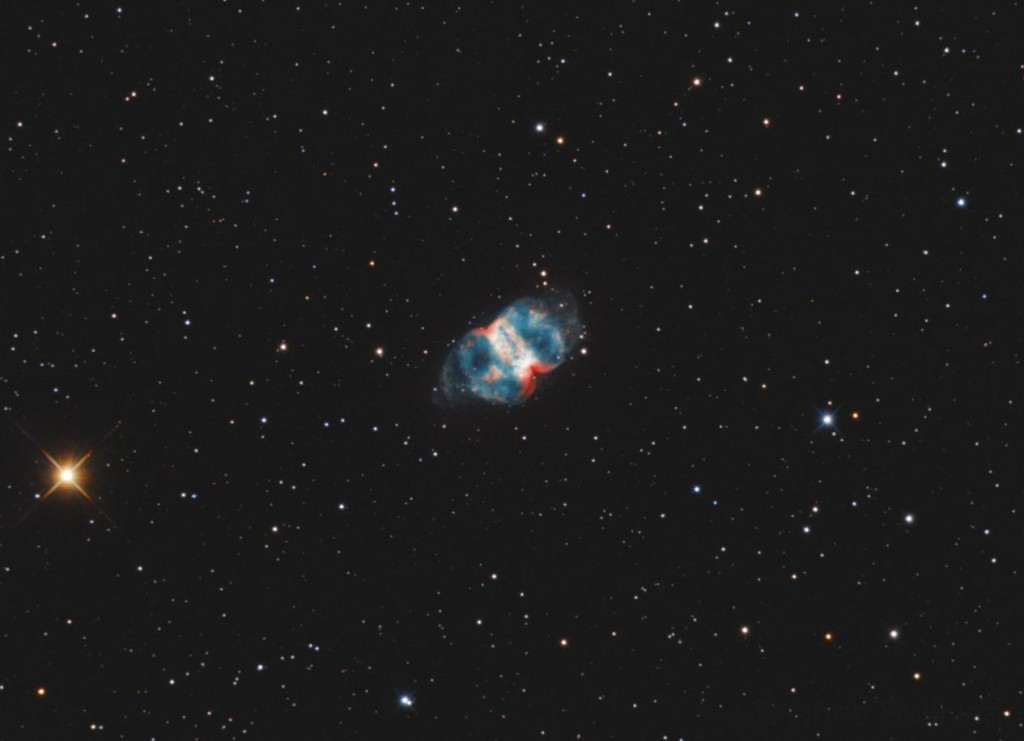 The Little Dumbbell Nebula taken with my 8″ Ritchey-Chretien

Q7: What kind of telescope is your favorite? Why?

Definitely the Newtonian. Aside from galaxies, I’m most interested in exceedingly faint planetary nebulae and it excels at capturing them due to its speed. It does a great job on galaxies, supernova remnants as well as emission nebulae thanks to its good mid-range focal length. 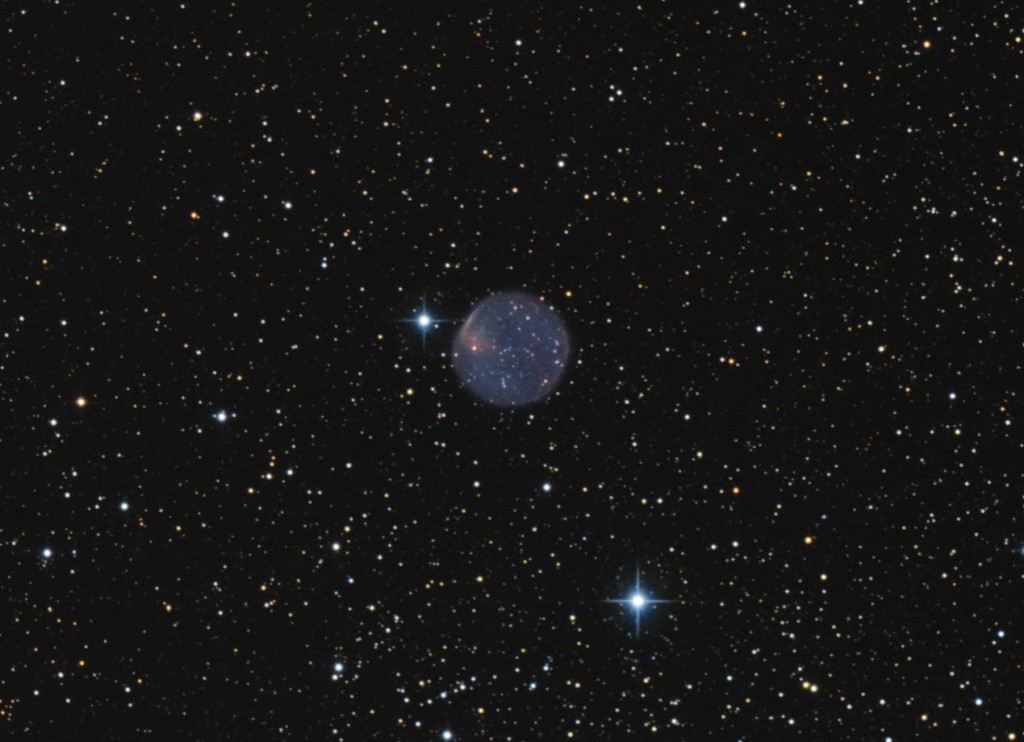 Ferrero 6 – Still the only version shot with a CMOS camera that I can find. ZWO ASI1600MM Cool, Explore Scientific f/3.9 Newtonian, Skywatcher AZ-EQ5

I first heard about ZWO shortly after I got into DSO imaging – probably late summer or early fall of 2016. I knew pretty early on that I wanted to upgrade my camera as my entry level Nikon was simply not up to task. I had my eye on a monochrome CCD camera, but – especially with the filters – there was simply no way I could afford it. Then ZWO came along with the 1600 MM-Cool. Once ZWO put together the package with the 8-position filter wheel and LRGBHaOIIISII filters, monochrome imaging with a capable camera suddenly became much more affordable than it had ever been before – less than half what it would have cost me one year earlier. I definitely wouldn’t be the imager I am today if it hadn’t been for that ZWO 1600 MM-C package. 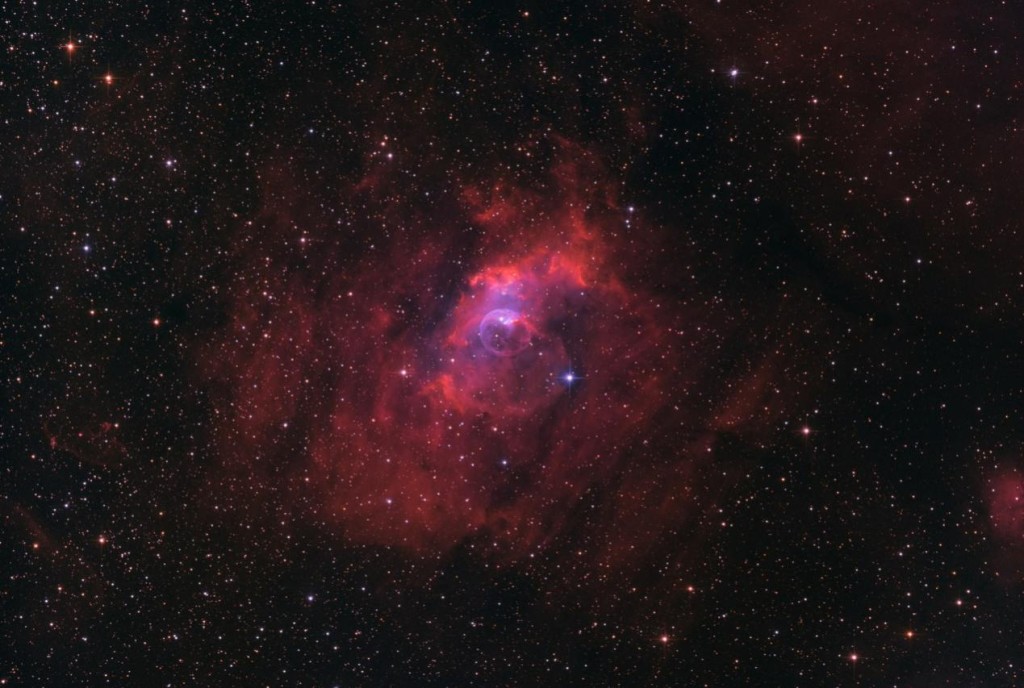 Q9: Which ASI camera is your favorite? And why do you choose it? Do you have any user experience share to the users who wish to buy an astro camera?

I think the 1600 MM-C is a great camera – the sensor is a perfect size (the largest you can get while still using 1.25″ filters, which is really cost-effective!), the pixel size is great for a wide variety of scopes and the FITS files it produces are very clean. I would definitely buy it again and it would still be my first choice for a monochrome camera. I’m also really impressed with my 290 Mini guide cam. When I first switched to off-axis guiding, I went with a Lodestar X2. When I got my second rig and decided to use off-axis guiding on that one as well, I decided to save a little money and go with a CMOS camera. It performs much better than I expected – I thought for sure I’d have to use the 290 on my Newt and put the Lodestar on the high focal length RC, but the 290 never has trouble finding a guide star despite the narrow field of view – even during galaxy season.

Q10: What’s your impression of ZWO?

In a word: Pioneering. Astronomy imaging – particularly DSO imaging – was dominated by expensive CCD technology until mid/late 2016. Then ZWO produced a CMOS camera that cost a fraction of what other companies were (and still are) charging for similar CCD cameras. This opened up monochrome imaging to countless people who previously could never hope to afford the imaging equipment necessary to produce high-quality images. The APODs and other award-winning images taken with this camera speak for themselves.