Chuck Ayoub is the winner of ZWO 2019 ASIWEEK #30 and has brought us many extraordinary astronomy photos. To make our ZWOers know this excellent astrophotographer better, we make this interview. Let’s all take a look now.

Q1: At first, congratulation that your nice image wins #ASIWEEK. Could you please introduce yourself to us?

I consider myself very lucky. I worked in IT for around 20 years, but at the same time, I ventured into internet advertising around 15 years ago just as the field was taking off.  It allowed me to retire at a relatively young age. Astrophotography became the perfect hobby for me to fill my days.  It never gets boring and everyday there is something new to learn and improve on.  So despite not working anymore, this hobby really keeps me on my toes and my mind thinking. 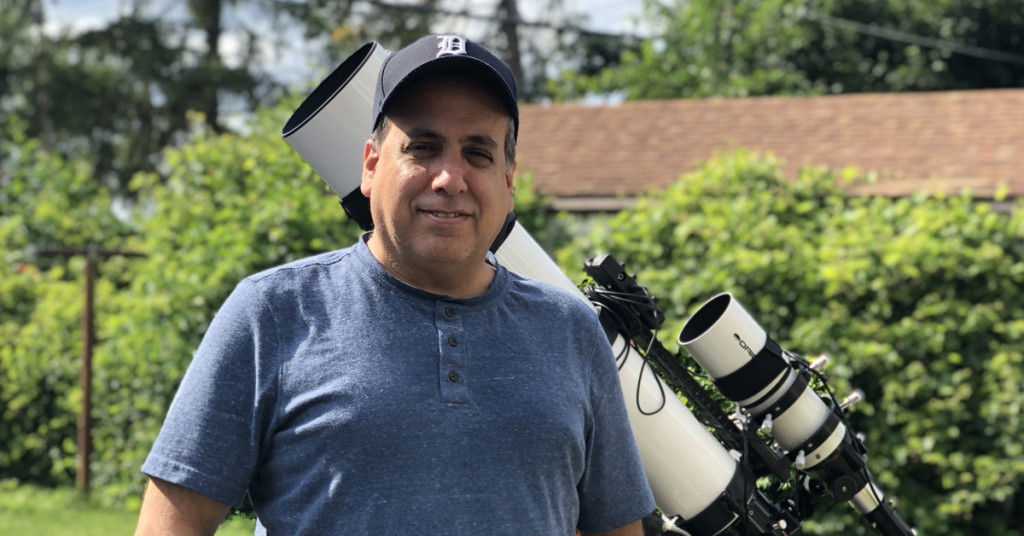 The funny thing is that I once thought I could be anonymous on YouTube by only using my first name, but it took people no time at all to find out who I was on FaceBook. Now I’m glad a lot of people seem to know who I am, and it’s always amazing when they tell me that I’ve had some influence on them in this hobby. 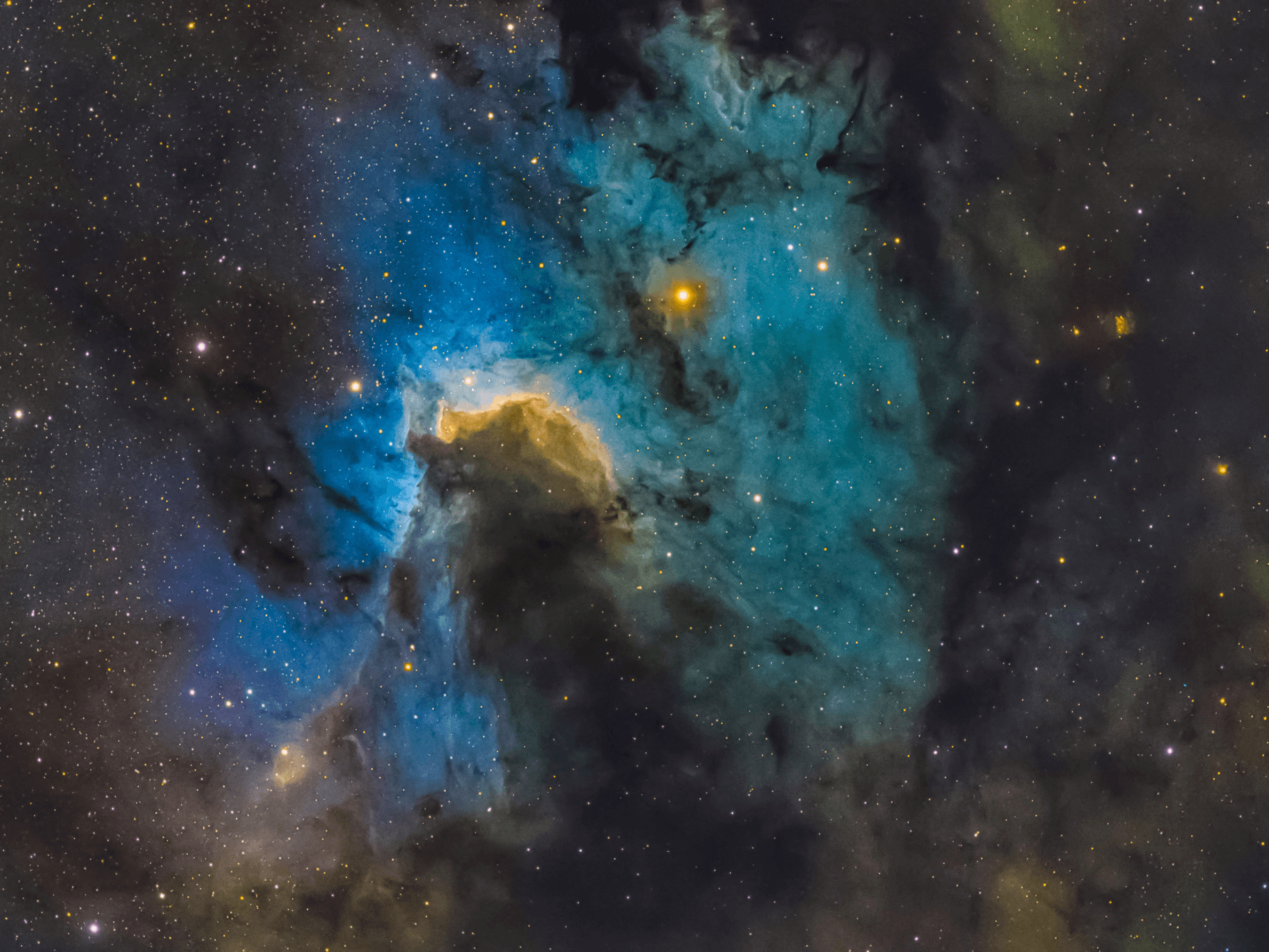 Thank you for selecting my Elephant Trunk Nebula as the image of the week.  It’s an honor when my pictures are recognized, especially from the company that builds the camera that I use. The Elephant Trunk Nebula captured with the ASI1600MM Cool

Q2: When did you start like astronomy? And when did you have your first telescope? What’s the feeling in first observing?

I think like most people in this hobby, my interest in astronomy goes back as far as I can remember, but I actually didn’t own a telescope until I was a teenager. Unfortunately, it was a little refractor and didn’t stand the test of time very well and I don’t have any surviving pictures of it. But it was still an amazing experience because that is the first time I was able to visually observe craters on the moon, belts on Jupiter, and Saturn’s rings.  My neighbors would gather around so they could look through the eye piece too.

This is hard to believe, but I didn’t start DSO imaging until around 3.5 years ago. I would have started sooner but I had no idea what people could accomplish from their own backyard with affordable equipment. I was a complete beginner in early 2016 and started in the dead cold of winter, but I was so excited to capture something, the cold didn’t bother me at all. The Horse Head Nebula in Ha captured with the  ASI1600MM Cool 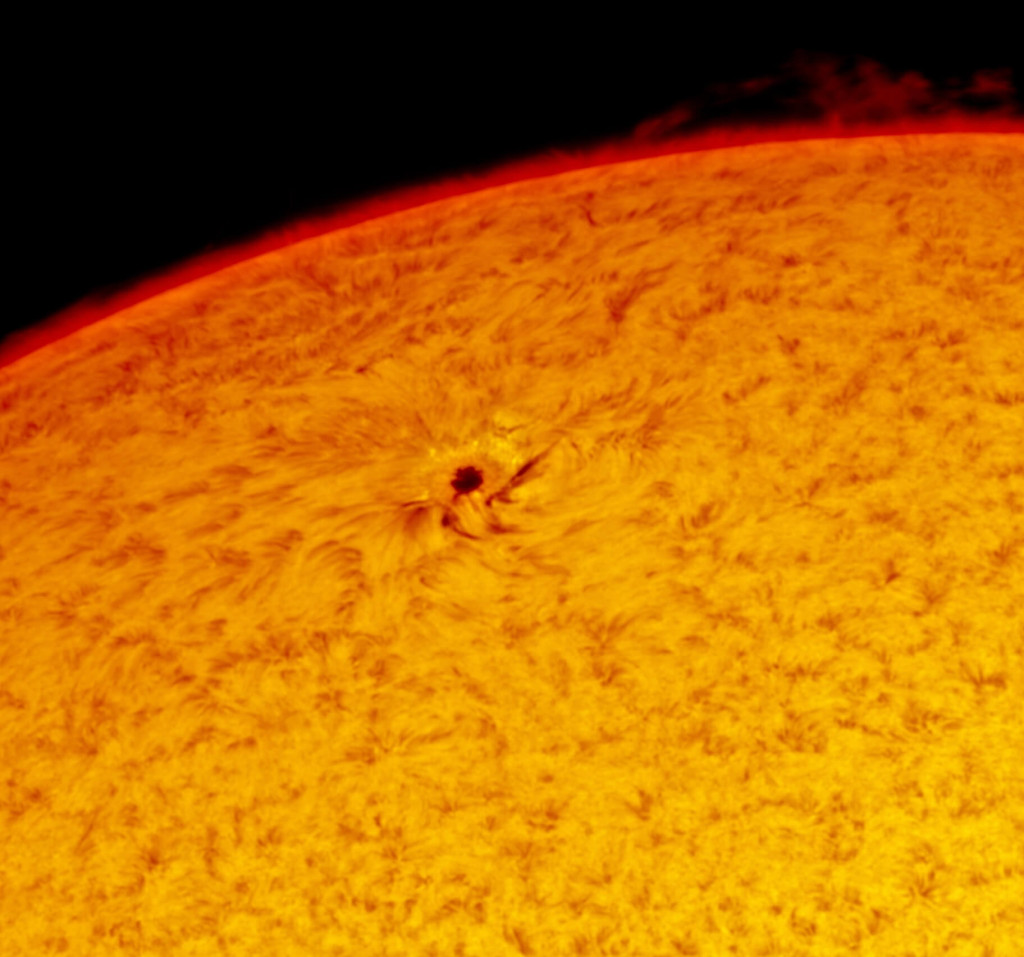 The sun captured with the ASI183MM camera

DSO imaging can be very hard, especially under severe light pollution.  I live under a Bortle 7 sky, just 20 minutes away from the bright lights of downtown Detroit.  So for me the biggest challenge is making sure I don’t become over-exposed with broadband imaging. I do this by lowering the gain on my ASI1600MM Cool camera and keeping my exposures very short (30 to 60 seconds).  It’s amazing what can still be accomplished with short exposures.

The most important part of astrophotography is having a mount that can track wel and doesn’t have a lot of backlash, because one could have a terrific camera and telescope, but if the mount is unstable or has such poor tracking ability that guiding software like PHD2 won’t even be able to help, then you may as well pack it up for the night. 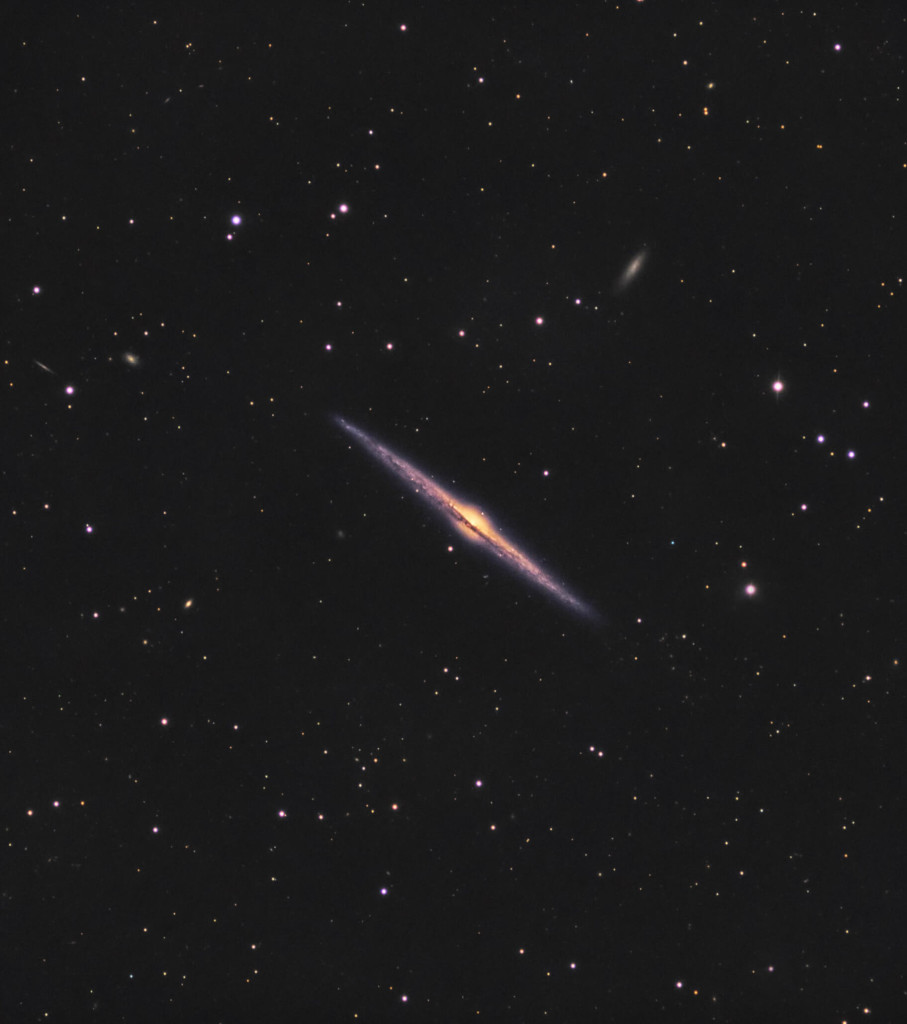 The Needle Galaxy captured with short exposures with the ASI1600MM Cool

Q5: Astrophotographer usually travel long distances to the darkest places to do DSO imaging, can you tell us about your past unforgettable experience?

Everyone I know seems to travel to darker locations to try some imaging, but I’ve never been to a star party or dark location.  Everything I’ve ever captured has been right out of my own backyard.  One of these days, I would like to try darker skies.  But I love capturing images in narrowband.  Narrowband filters cancel out a lot of the light pollution in my area. 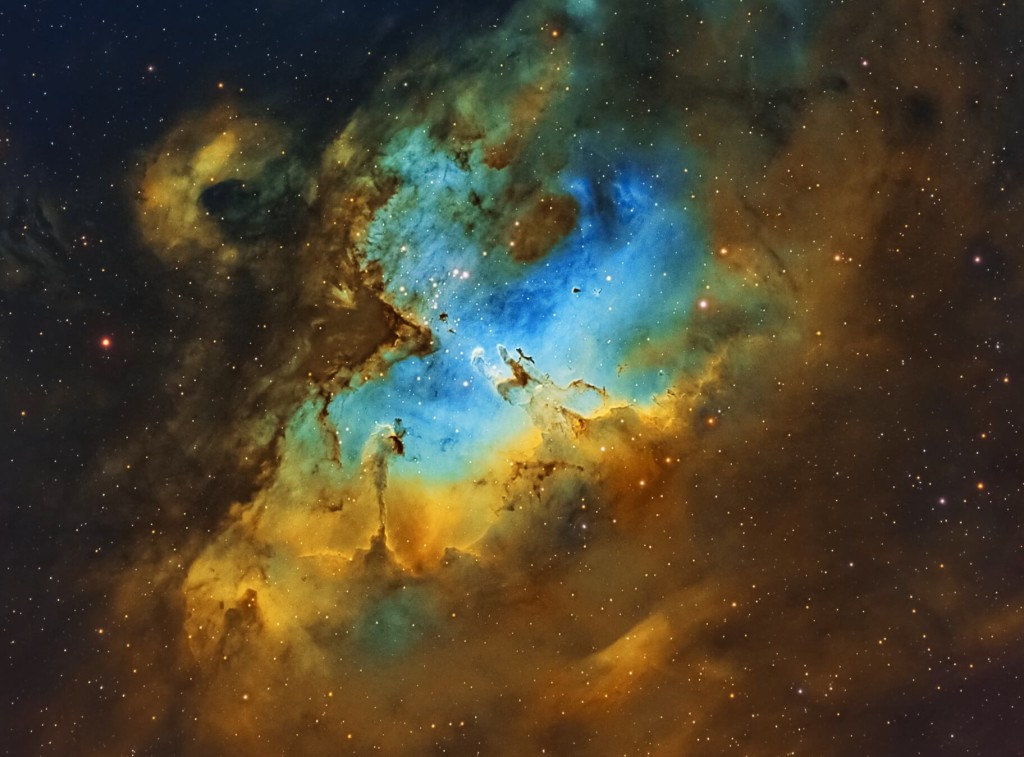 The Eagle Nebula in the Hubble Palette narrowband filters

Q6: What equipment are you use currently? can you show us some images of your setup?

Right now I have 4 rigs: 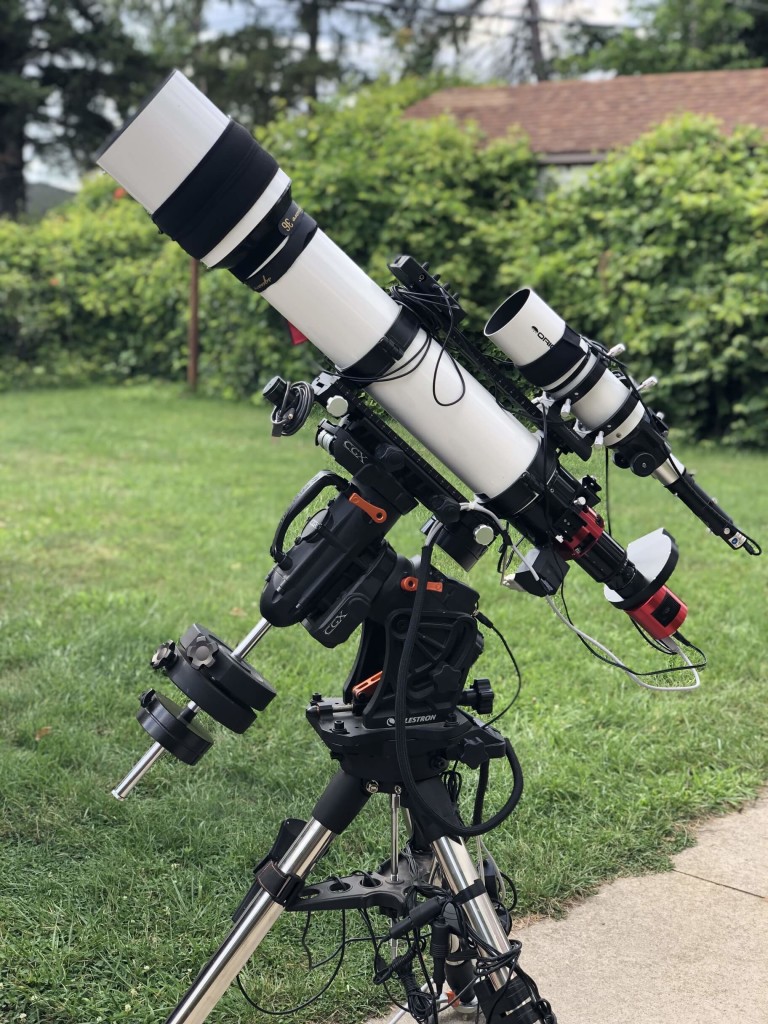 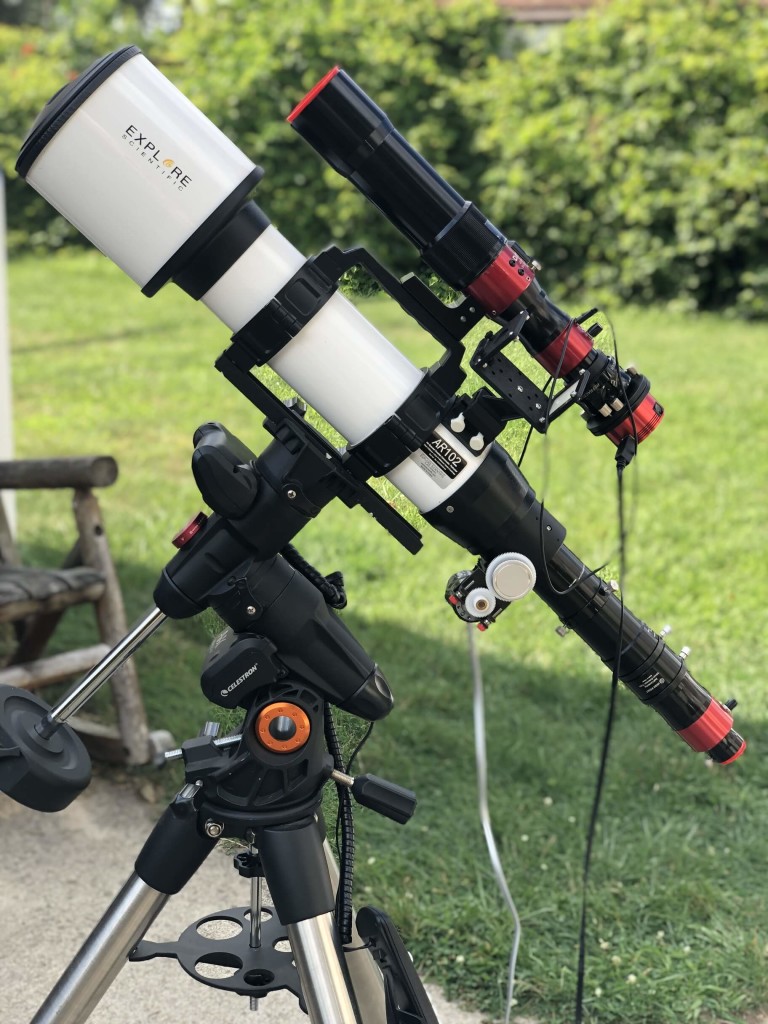 My first NASA APOD, solar animation captured with the ASI183MM:

4) Wide Field Imaging: Sky-Watcher EQ6-R mount, Orion ED80T CF telescope, this is a new setup and I haven’t determined which camera I will settle on for this, color or mono. 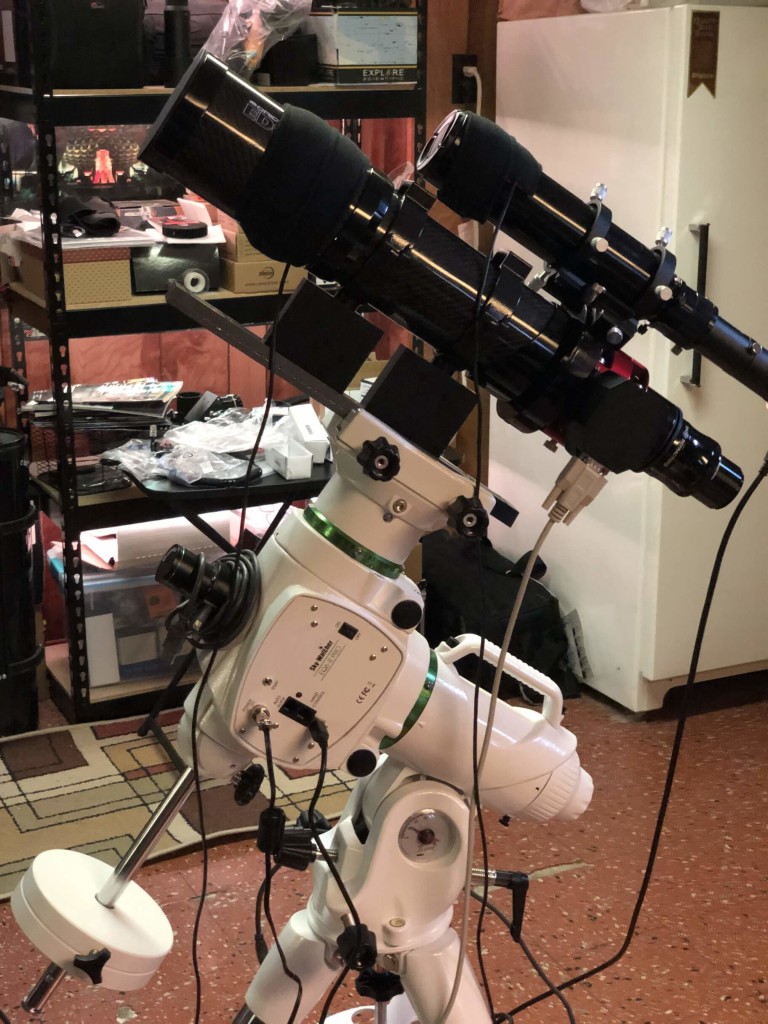 Q7: What kind of telescope is your favorite? why?

For now I really like refractors, even though they are slow compared to some reflectors.  I get enough clear skies so that I can still capture a fair amount of objects in which I’ve gathered 20+ hours on.  I would like to own an f/2 scope one day, but I have enough equipment to keep me very busy for now. 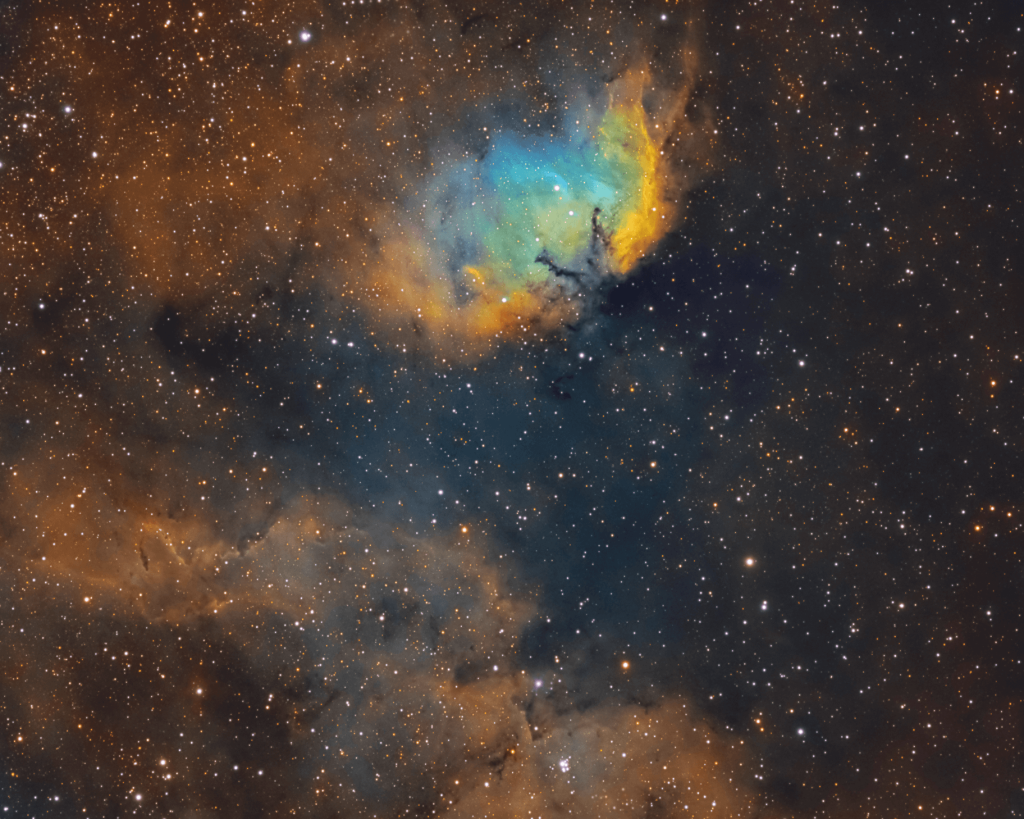 The Tulip Nebula 22+ hours captured with the ASI1600MM Cool

I was lucky that I heard about ZWO at the same time I started looking for a dedicated astronomy camera.  When I was looking for a camera, it was either OPT or ‘High Point Scientific’ (hard to remember which company) that suggested I try the ZWO ASI1600MM-c camera.  Version 2 of that camera (with the built-in hub) had just come out a few months before, so I consider myself an early adopter of it.  The first object I captured was the Bubble nebula and I was amazed that I could see the bubble in a single sub!  The ASI1600MM-c was much more sensitive than the DSLR I was using before. The Bubble Nebula captured with the ASI1600MM Cool

Q9: Which ASI camera is your favorite? And why are you choose it? Do you have any user experience share with the users who wish to buy an astro camera?

My favorite camera would be the ASI1600MM Cool.  With its pixel-size, the image scale seems to fall under a nice range for either wide field or larger focal lengths without being under or over-sampled.  It seems like the perfect camera for all situations I would need to use it for. Q10: Did you know our ASIAIR? If yes, what features do you like？any new features you like to add?

I feel like I am behind the times because I haven’t tried the ASIAir yet, but I’ve heard a lot of good things about it.  With the new wide field rig I am building, I was considering trying the ASIAir on it.

Q11: What’s your impression of ZWO?

I give ZWO a lot of credit.  With everyone I speak to who tells me they want to buy a camera, it’s always a ZWO camera that comes into the conversation.  That says a lot about the company.  And I like that ZWO is pushing the envelope with the ASIair and getting into electronic focusers.  I can’t wait to see what’s next.