My name is Eduardo Schaberger Poupeau, I was born in Rafaela, Santa Fe province, Argentina and I’m 47 years old. I fell in love with astronomy at an early age and probably this passion was nurtured by the time in which I grew up. The space exploration was at its peak, the space shuttles, Halley’s comet appearance (which I was able to see), the 1987’s supernova, among other things. Even though my life went down through different paths I’ve never lost that feeling and liking for gazing at a sky full of stars, even without equipment.

In 2006 I’ve started to work as a photographer professionally, children and family’s portraits mainly but I also pointed my camera towards the sky. It was at the beginning of 2015, with the appearance of Lovejoy’s comet that I decided to spend more time with astrophotography. A discipline which I’ve learned on my own.

My first attempts with astrophotography were in order to capture deep sky objects. As time went by I became more interested in solar imaging. Nowadays I dedicate most of my time to it. 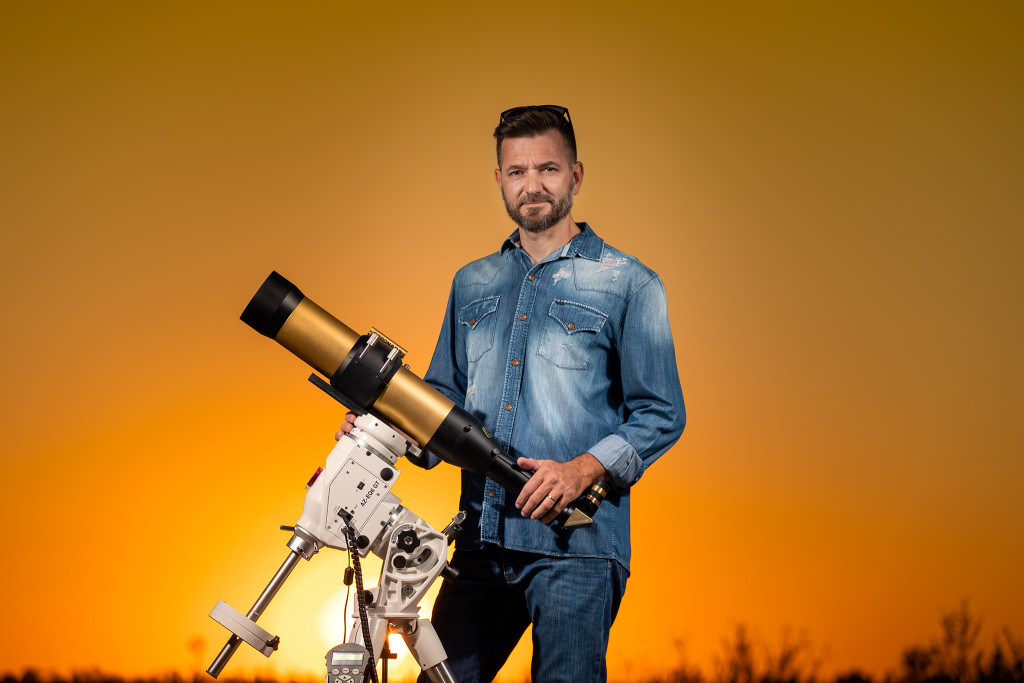 Me and my solar telescope.

Q2: What gear do you use for that photo? How did you capture it? In order to take this photograph I used a Coronado Solarmax II 90mm aperture single stack telescope and a ZWO ASI183MM camera onto a Sky-Watcher AZ-EQ6 equatorial mount.

The technique that I used was “Lucky Imaging”. This technique is used to record hundreds or even thousands of images over a short timespan in order to capture some images when the seeing is momentarily steady, and then use special software that analyzes all those frames and picks out just the sharper images.

Due to the fact that there was poor seeing at the moment, I had to make about 20 videos (30 seconds each) so as to be able to choose the ones with better quality in order to stack them up with Autostakket. Each video had 730 frames and I stacked the 21% of them. The final version is made up of a composition between 2 images, one for the solar disk and the other one for the prominences. During the post-process with Photoshop I inverted the image to highlight the details and then I colored it. 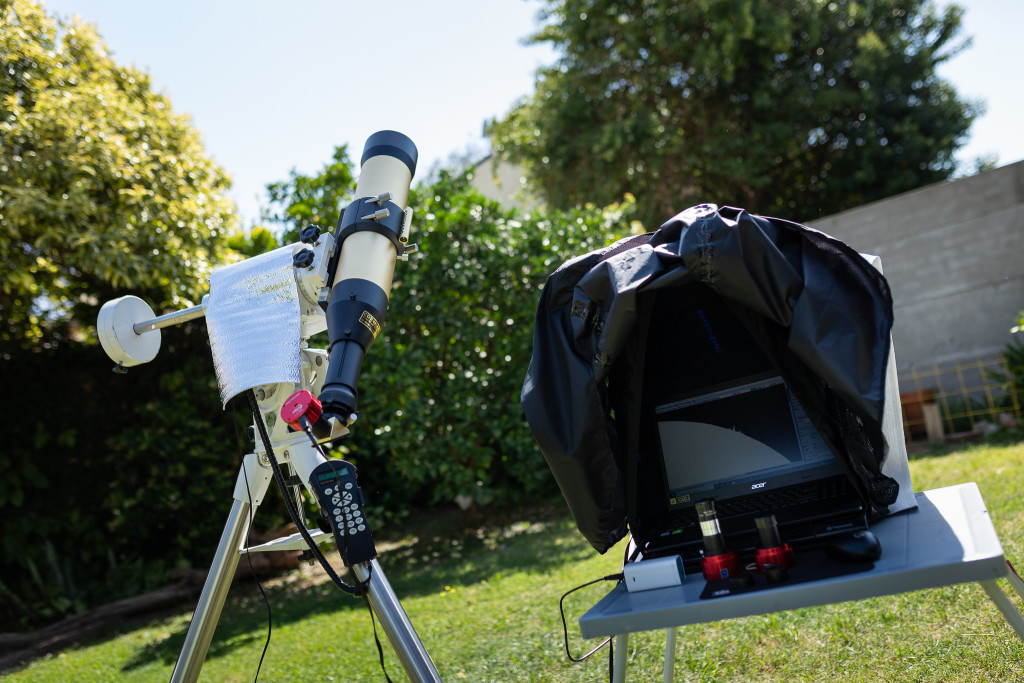 Q3: For solar imaging, what kind of telescope would you recommend?

So as to take solar images I use three telescopes. A Sky Watcher Esprit 120 for white light and calcium (Ca-K), a Sky-Watcher Maksutov Cassegrain 180 for details of sunspots and sun granulation and a solar telescope for H-alpha images. Each of them shows interesting characteristics, but if I have to recommend one in particular I would suggest the solar one. Even at this moment of minimum solar activity it shows interesting details to observe and capture. Depending on the budget I’d recommend a telescope between 60mm and 100mm aperture. Bigger apertures would only advantageous be with a perfect seeing. Q4: Can you tell why do you have the particular interest in solar imaging?

I find solar imaging very attractive. In the first place, is the only star we can get details of. In the second place the sun can always reveal new characteristics and details. Even at this moment of low solar activity I was able to capture some interesting prominences that change their shape as the hours go by.

During the last days of October a sunspot (AR2778) showed up and within 24 hours grew its size so much so that it became the biggest of the new solar circle 25 until that date. While I was answering this interview, on November 3, 2020, a new sunspot (AR2781) appeared and became the largest and most spectacular in recent times, surpassing even AR2778.

In a few days we could see the appearance of the two largest sunspots by far from the young solar cycle 25. Q5: What suggestions you may give to the newcomers to help them take a good solar picture?

Solar picture’s biggest enemy is the atmosphere’s turbulence. Therefore my first advice for those planning to initiate in this kind of photographies is that they should identify the perfect time for the perfect seeing at their location. Generally it occurs in the morning time when the sun is not that up in the sky and the soil and air’s temperatures are balanced. Having the best equipment and being skillful will never be enough.  If the seeing is extremely poor we won’t be able to obtain good results.

My second piece of advice is that they should be patient and perseverant. Even on bad seeing days we can find some stability moments that allow us to obtain a good image.

During Mercury’s transit last year I decided I wanted to take a good picture of planet and solar granulation. During those 5 hours I found only a window of a few minutes to make the image I wanted. But I did it.

Turbulence affects the red channel much less, so if we use an H-alpha telescope, we can obtain better results with a regular seeing than if we photograph in white light or calcium. Q6: Where do you normally take astrophotos, from your backyard or somewhere else?

Generally my solar pictures are taken from my backyard. However when it comes to capturing ISS crossing the face of the sun or the moon I travel to different locations so as to be at the best place possible. Q7: Do you photograph DSO targets?

Right now I’m not capturing deep sky objects. However I do have my ASI1600MM Pro, my filter wheels and narrow-band filters ready to use! Q8: How did you know ZWO and what’s your first ASI camera?

I got to know the ZWO at some astrophotography forums. Lots of people were using it and had excellent results. The brand made me feel confidence from the very beginning. Therefore I decided to buy two of them. As they are not available here in Argentina, I bought them in the USA. So, the first cameras that accompanied me in this passion were an ASI174MM and a ASI290MC Cool.

Q9: Which ASI camera has a special place in your heart?

The cameras that I use the most are a ASI183MM and a ASI183MC Pro. They are great cameras but there’s no doubt, the one that has a special place in my heart is the ASI1600MM Pro due to the fact that it gave me the opportunity to obtain my very first APOD from the NASA with a picture of the ISS crossing the face of the sun. Q10: The year 2020 is going to end, what achievement have you made on astrophotography during this year? Do you have any goals for next year?

This year I was able to take very interesting solar photographs. On July the 31th I’ve managed to photograph a protuberance of more than 200.000 km of extension, which I consider one of my best shots. Another accomplishment of mine is winning ASIWEEK. Since this initiative started, I’ve been dreaming of winning with one of my solar images.

As for next year I look forward to continuing improving my shooting and processing techniques so that I can be prepared to when solar activity increases. Q11: What kind of astronomy-dedicated products do you hope us to develop in the future?

I’d like you to develop a monochromatic version of the ASI462MC so as to replace my ASI290MM, my favorite camera for photographing the details of the moon and details of the sun in white light.