Ian Barredo is the winner of ZWO 2020 ASIWEEK #39 and also one of the beta testers of ASIAIR PRO. His picture “Eastern Veil Nebula” that showed vibrant colors got unanimous praises from our judges. In this interview, he is going to bring us more stunning astrophotos – Just read on and you’ll see ;D

Q1: Congratulations your nice image won #ASIWEEK, Ian! First, could you please introduce yourself to us? Hi. Thank you and it is an honor to be selected for ASIWEEK. My name is Ian Barredo. I am originally from the Philippines and currently live in Regina Saskatchewan, Canada with my wife Maria and our two sons. Other than taking astro photos, my other interests are in music, particularly guitars.

Q2: How did you become an astrophotographer? What makes you obsessed with astronomy?

I love photography in general as a hobby. I started photography in 2005 with interests mostly on landscape but astrophotography didn’t really come until 2015 when I purchased my first telescope. As a child I always have been interested with science and the night sky. I like to read science books and there is one book which I cannot forget titled “Man and Space” by Arthur C. Clarke. It talks about the history of space travel, the future possibilities of interstellar travel and humankind dream of the space. The book became one of the foundations of my interest in astronomy.  Since then photos of deep sky objects especially the ones from the Hubble Space Telescope have made me wonder what would it be like to take images of these objects myself. One other key factor would be star parties. 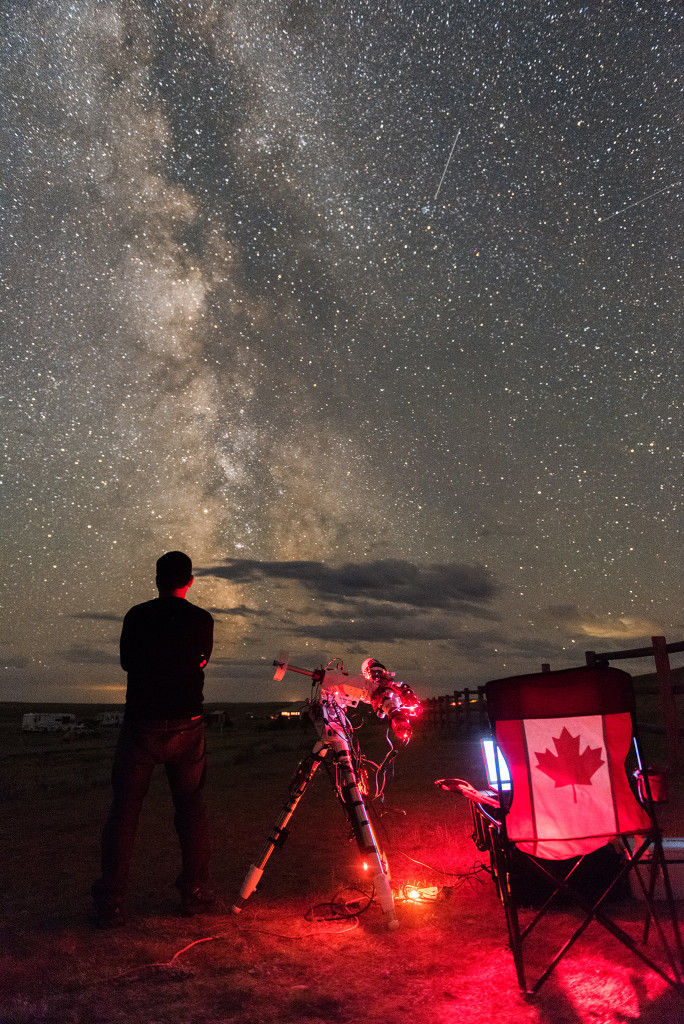 Q3: As we all know that astrophotography has a very steep learning curve. So how did you learn the skills at the beginning and how long did it take for your to successfully produce your first decent image?

I prepared myself and did my own research for many months on how to get properly started in deep sky astrophotography. I read about equatorial mounts, different types of telescopes, auto guiders, field flatteners and reducers, polar alignment etc.. I tried to educate myself on these things before making a purchase. I did not concern myself too much on the photography side of things. I was more focused on the equipment setup and terminology. I was not on social media so there was nobody I can ask online. So I mostly watched video tutorials on telescope setup. On May of 2015 I bought a Skywatcher 80ED refractor with a goto EQ-3 mount and paired it with my stock Nikon D610 full frame camera. My first decent image came a month later when I shot the Lagoon nebula from a dark campsite. I was rewarded when it got published on the November 2015 issue of SkyNews Canada astronomy magazine. I felt great pride and honor for such because I consider myself an absolute beginner in astrophotography that time. It motivated me to pursue this hobby further. Summer of 2019 was most memorable when the image of the Swan Nebula I took the previous year was selected as the cover page of May/June issue of SkyNews Canada. 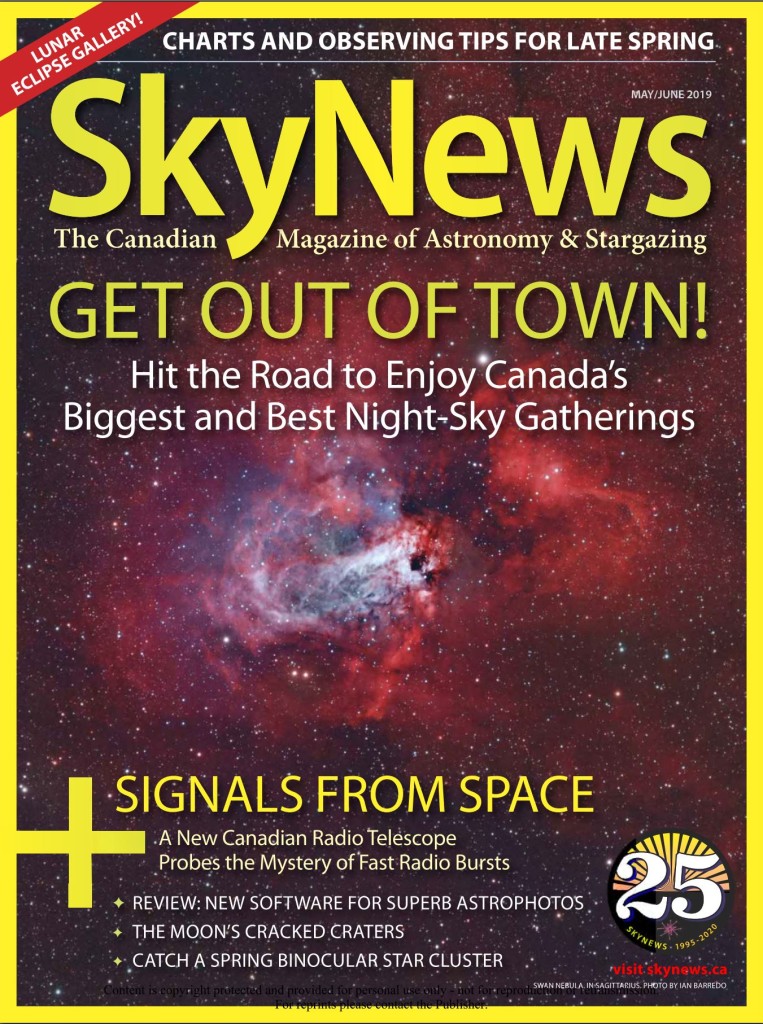 Q4: Do you often travel long away to take astro photos? What’s the most unforgettable place have you been?

I see myself mostly as a backyard imager. It is the most convenient way to take astro photos while balancing work and family responsibilities. During summer I take the family out for camping and I would often bring the telescope. My wife is very supportive on my astrophotography and as a family we enjoy the outdoors. Saskatchewan is known as the land of living skies, we are fortunate to have good clear skies for most times of the year . I do not have to travel too far to get to a good dark site when I want to. Grasslands National Park dark sky preserve and Cypress Hills dark sky preserve, both in Saskatchewan are the two memorable places for my astrophotography. Grasslands National Park is where I experienced the beauty of a Bortle 1 sky. Cypress Hills Interprovincial park (Bortle 2) is where the annual Saskatchewan Summer Star Party take place and I have been attending for 4 years successively, except for 2020 which was cancelled. If I am not out camping and taking astro photos, I mostly do backyard astrophotography. 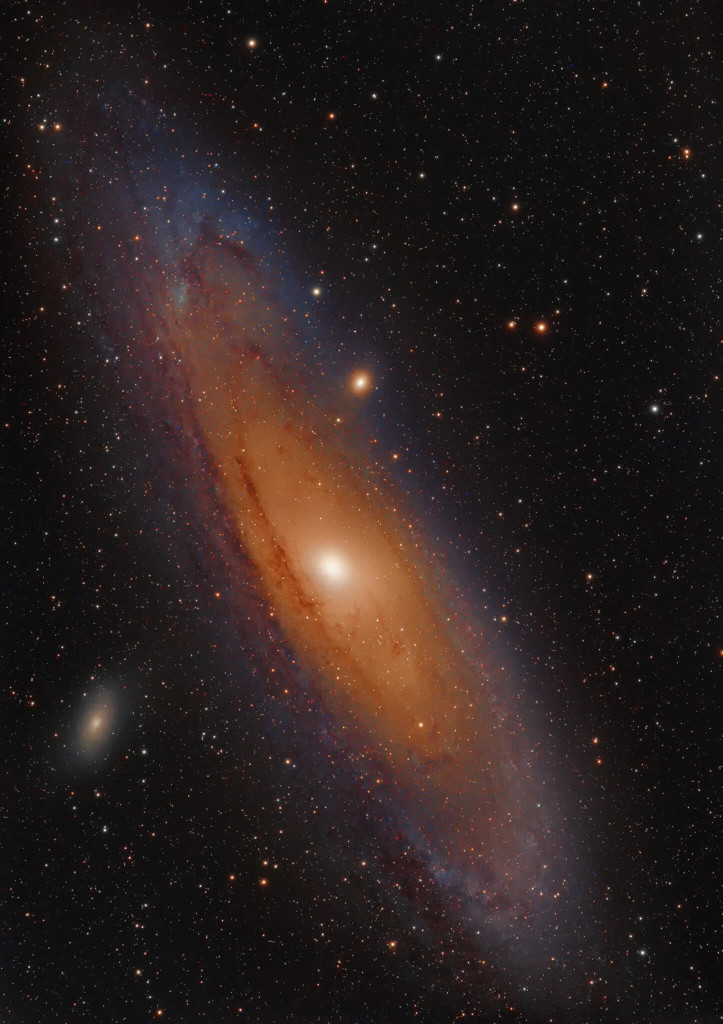 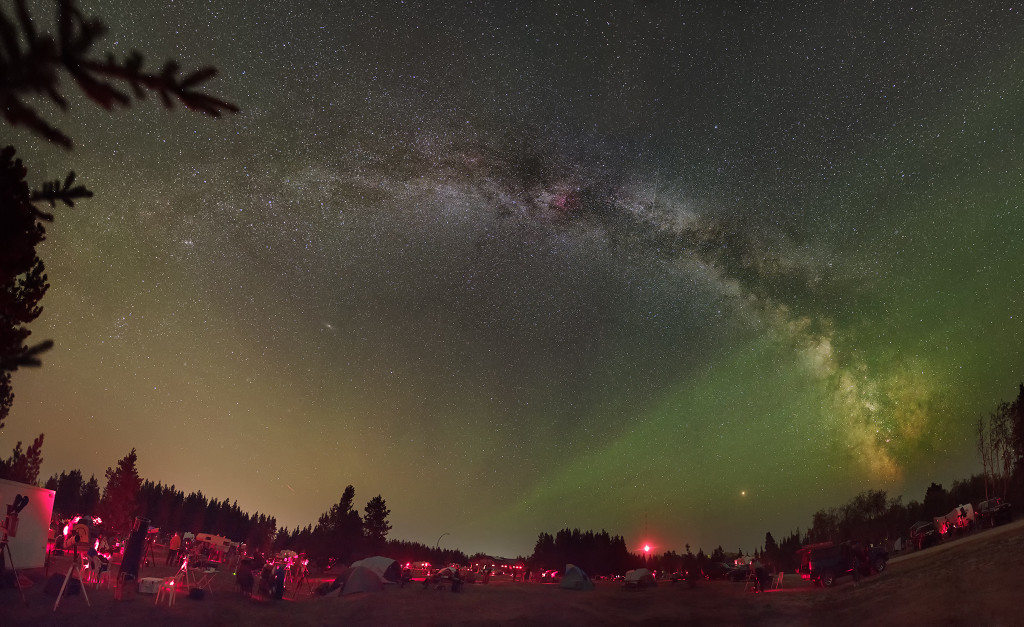 Q5: What setup do you use? Any pictures of them?

I started with a Skywatcher 80ED and a Skywatcher EQ-3 mount and stock dslr back in 2015. Currently I have 2 refractors that I use on my Skywatcher AZ-EQ6 and the ASI1600MM Pro as my main camera. I use the ASI290 mini on William Optics 50mm guidescope as an autoguider for both setups. Last year I got the ASI183MM Pro and the awesome ASIAIR. I also have a smaller setup which I use for widefield astrophotography. 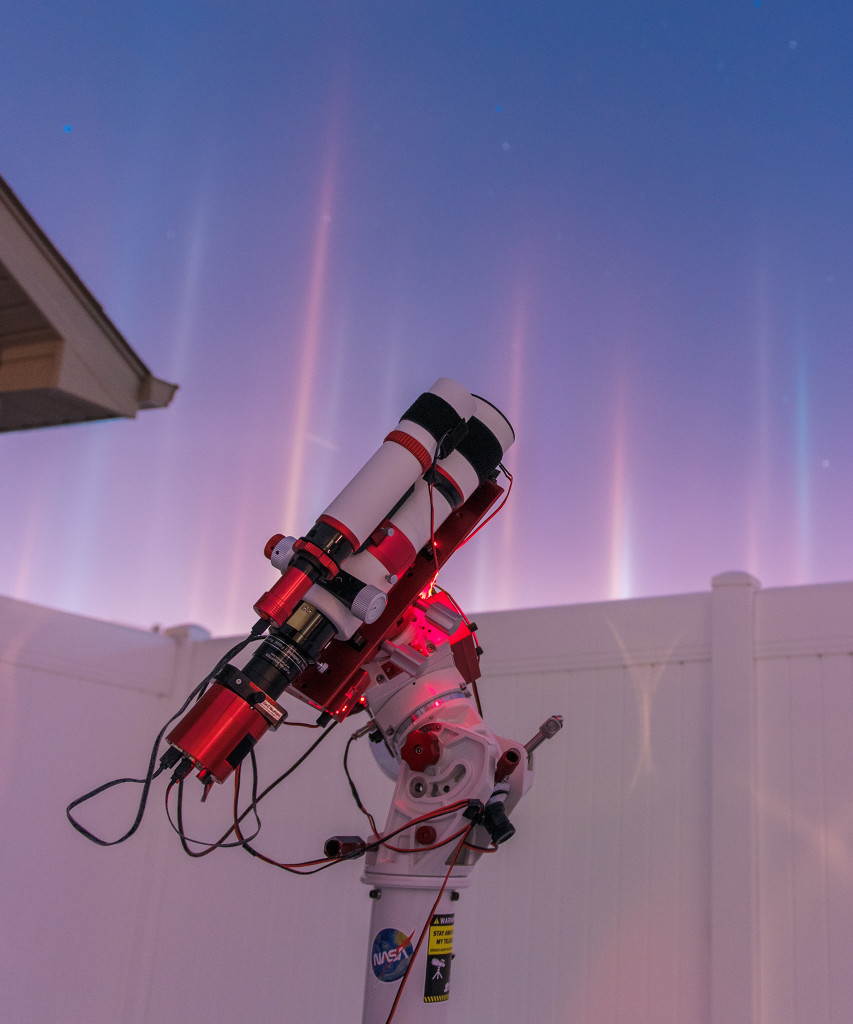 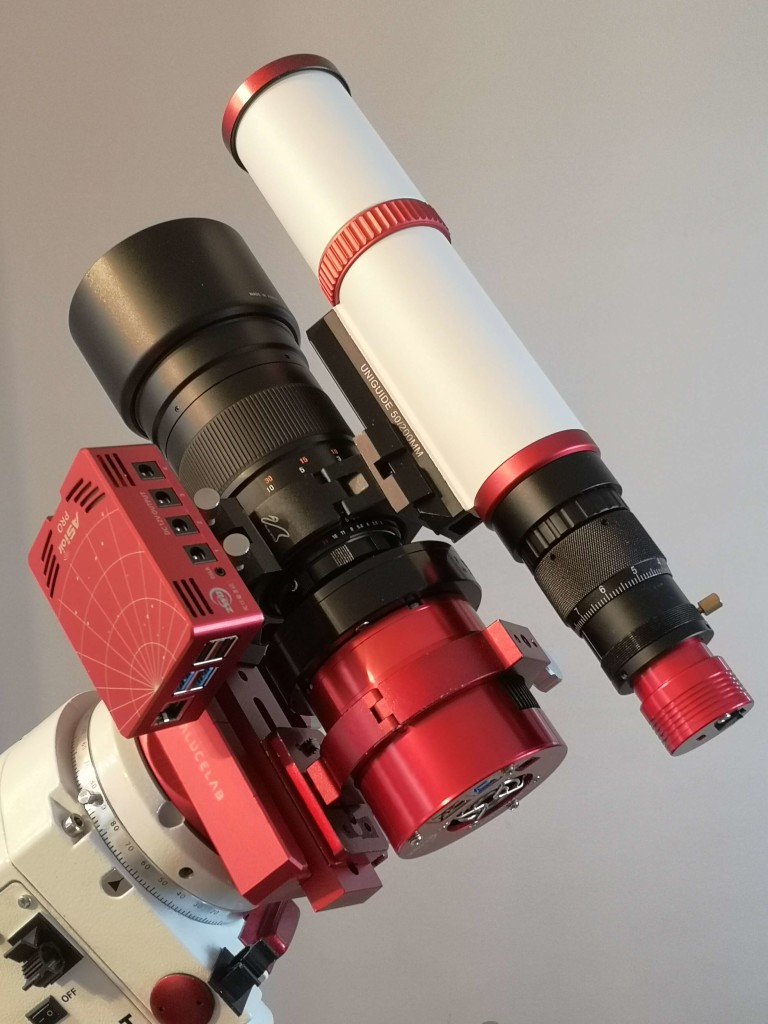 Q6: Would you mind detailedly telling us how did you capture your winning picture Eastern Veil Nebula and how did that beautiful colors come from?

My first attempt on the Eastern Veil Nebula was on June of 2016 using a Skywatcher 80ED and an astro modified Nikon D5300 with IDAS LPS D1 light pollution filter. It was an OSC RGB shot and I wasn’t really too happy with it. I told myself to re-shoot it once I have proper equipment. So this time I thought of shooting the Eastern Veil once and for all. It took 3 nights to gather the Ha data and 2 nights for the O-iii. The ASIAIR Pro performed flawlessly each session, platesolving and guiding on the target each time.

I paired the ASI1600MM Pro with the 103mm refractor and 3nm Chroma filters. These filters are the narrowest you can find for deepsky use and the results of the H-alpha and O-iii stack blew me away. Stacking, calibration and pre-processing was done in Astropixelprocessor.  Then I used the HHO color scheme where you assign Ha-Ha-Oiii to the RGB channels to get the golden colors of Ha and cyan colors of Oxygen iii. I used Starnet++ to remove the stars to further process the details of the nebula then recombined the stars back for the final image. Q7: When it comes to post-processing, which style do you prefer your images to be?

I image under Bortle 8 skies so I found that narrowband images work best for my sky condition. I do like to shoot some objects in one shot color RGB but mostly I prefer the look of narrowband. It gives me more control to tweak the color channels independently. I like seeing the structure of the O-iii in contrast with the dominant Ha emission. 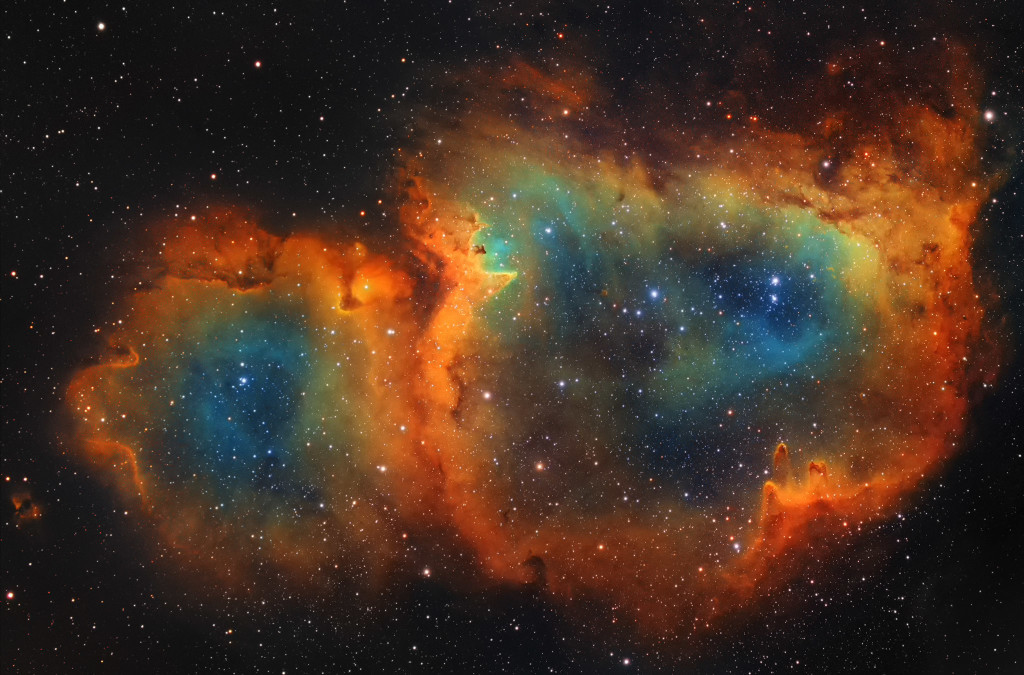 Q8: Will your families also join in your star nights?

It was actually back in 2014 when I was camping with my wife when we came across a star party by accident. I was immediately hooked and it was one of the contributing factors that inspired me to get into astrophotography. Since then my family and I are regular participants of our local star party. Observing the Milky Way and the stars with the family is a feeling like no other. My eldest son who is 5 years old loves to join me when I image from our backyard. 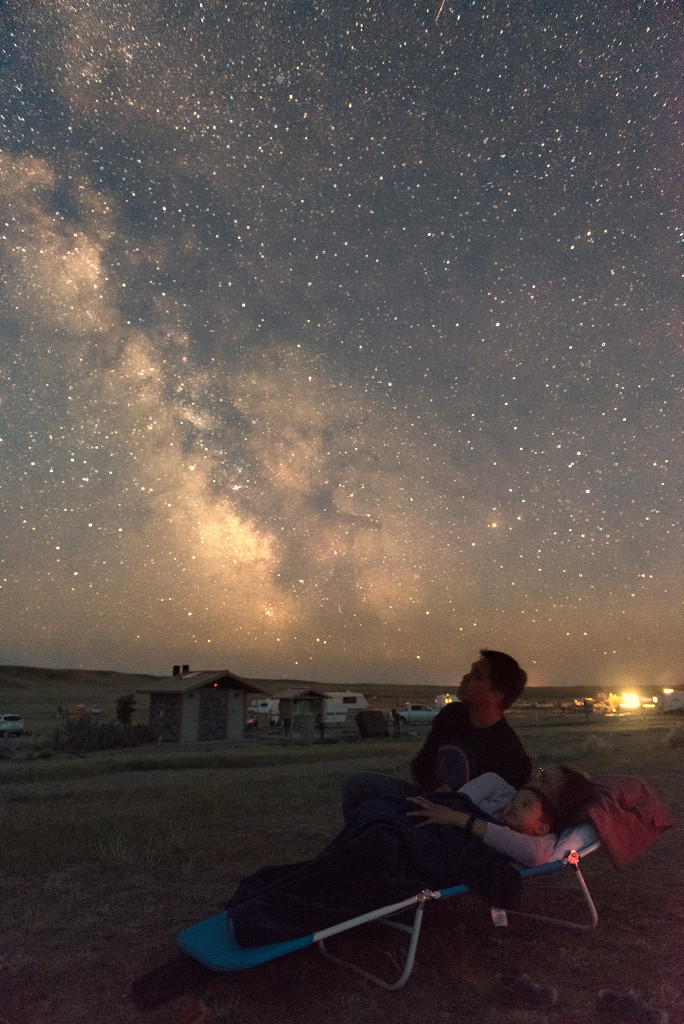 Q9: When did you know ZWO? What’s your first ASI camera?

I was aware of ZWO Astronomy cameras since 2015 through various astronomy forums but it wasn’t until 2018 that I bought my first ASI camera, the venerable ASI1600MM Pro. Coming from a dslr it was one of the best upgrades to advance my astrophotography to the next level. My second ASI camera is the ASI183MM Pro. I love it for high-resolution work. Monochrome and narrowband allows me to get the most for my images, although it takes a bit more work it is all worth the effort. I hope to get a color ASI camera in the future. 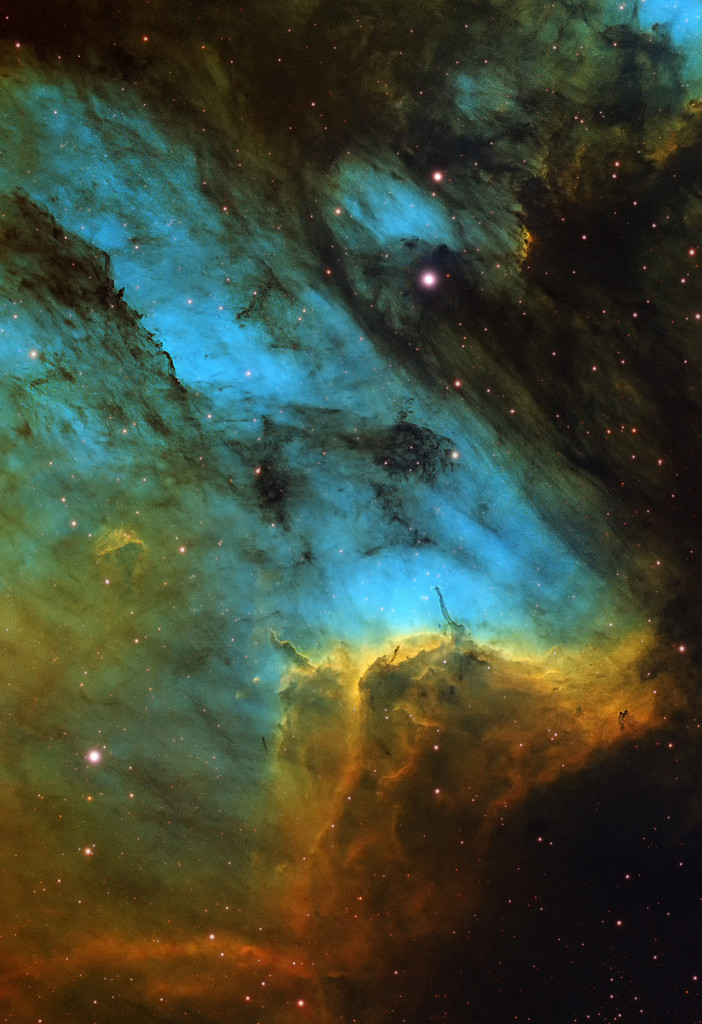 Q10: Can you tell us your story with ASIAIR? When did you start the testing work for it?

I came to know about ASIAIR through the ZWO Astronomy Cameras facebook page then I joined the ASIAIR facebook group sometime in 2018. I saw the ASIAIR as a great solution for simplifying image acquisition in one very compact package. My intentions for using the ASIAIR was very specific. I wanted to get rid of the mount handcontroller and with ASIAIR supporting EQMOD this became a possibility. So I started using and testing the EQMOD driver in early 2019 and provided feedback to the ASIAIR dev team. I felt so fortunate to have access to the beta versions of the application. Over time I saw the ASIAIR became an extremely versatile piece of equipment providing an all-in-one solution for astrophotography. I consider the plate solve as one of the best features of ASIAIR, paired with its robust object data base as well as integration to SkySafari planetarium app. It made image acquisition so much easy. ASIAIR makes it possible for me to spend more time indoors, with just the phone in my hand to monitor the progress and make adjustments. Polar align function is also one of the selling feature for me. Indeed it was as easy as 1,2,3. Right now I cannot even think of astrophotography without ASIAIR. There is no going back. Q11: Which feature of ASIAIR PRO do you appreciate most? And where do you think it can be continuously improved?

I appreciate the ASIAIR V1 and the PRO as a whole. One thing that made the PRO stand out is the integrated power ports which made cable management super easy and neat. I was so excited when the PWM functions on the power ports were implemented. I am very satisfied with all the current functions of the ASIAIR PRO in general. The app is continuously being improved with each new release in terms of user interface and the addition of new features such as video support and so much more. 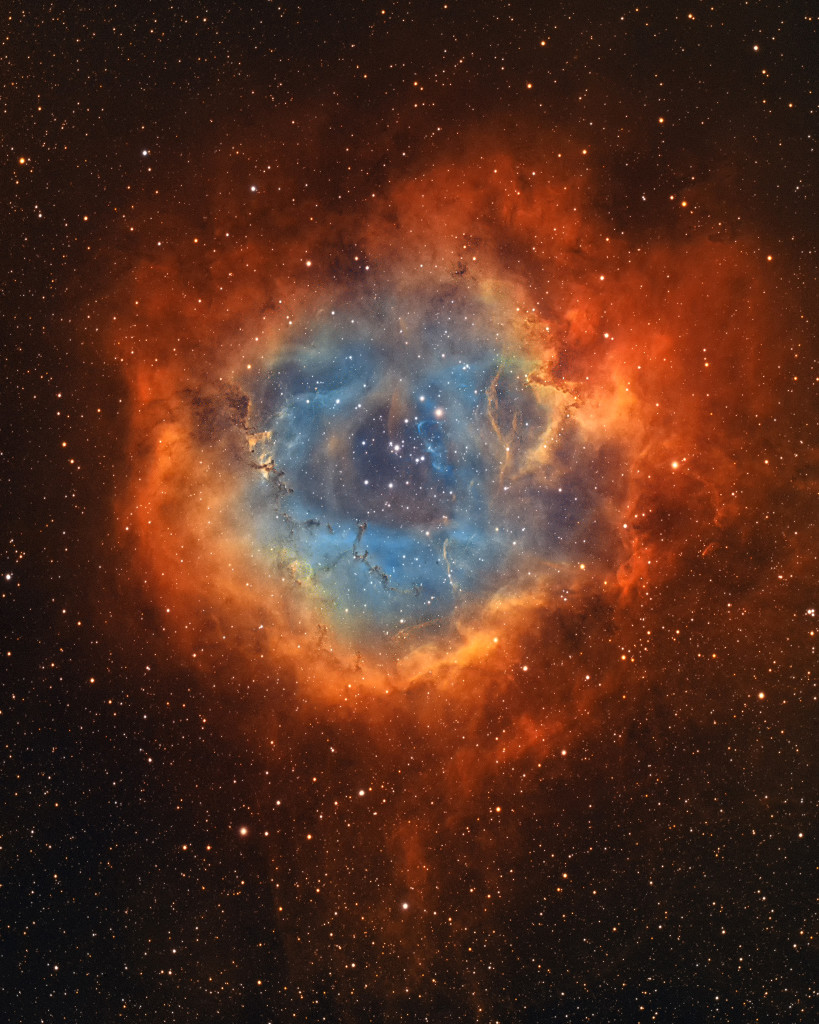 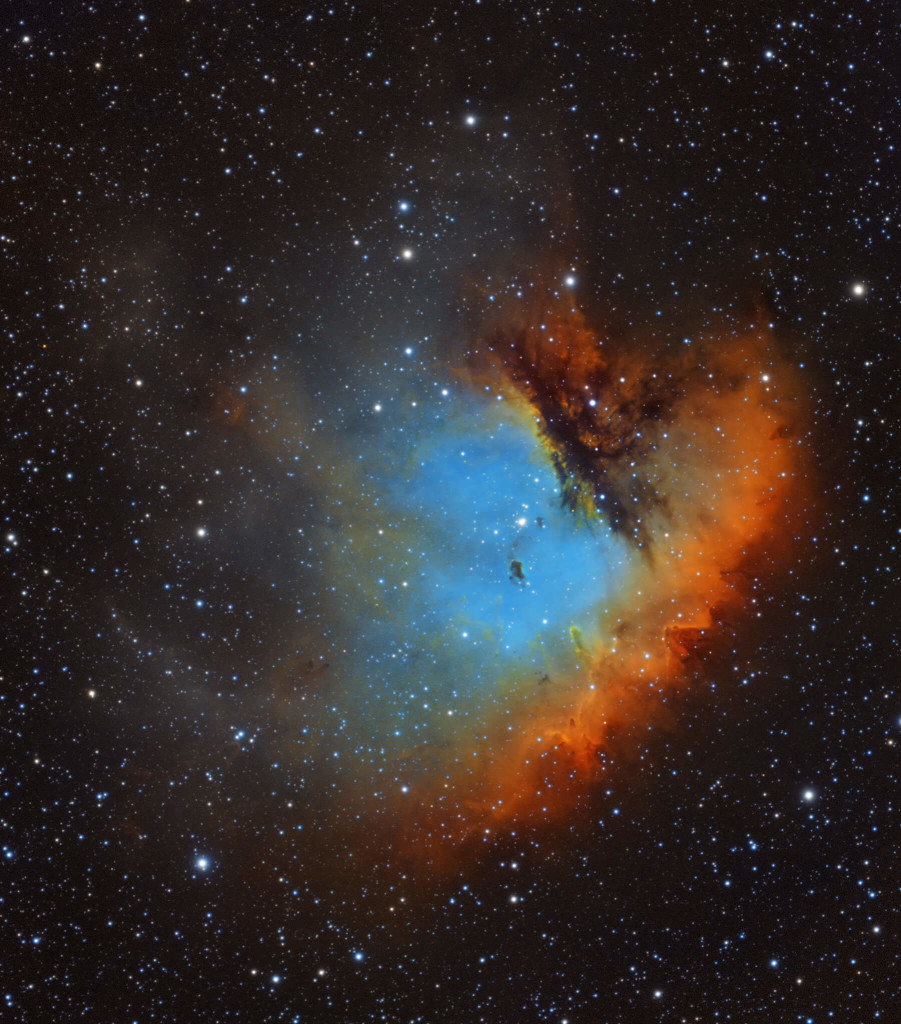 Q12: What’s your astrophotography goal of this year? Have you already accomplished it?

One of the most exciting events in astronomy this year is the appearance of comet C/2020 F3 Neowise. I thought earlier that I won’t have a chance to capture this rare cosmic visitor but thanks to ASIAIR PRO, it was so easy to find and capture the target. For 10 nights I tracked the comet and took lots of photos. I guess I can say that was one of my goals in astrophotography for this year. Winter is coming and soon the showpiece winter targets start to be visible again. I have limited view of the south horizon so getting a good photo of that part of the sky has been a goal for me each year. Last but not least, getting selected for ASIWEEK. =D 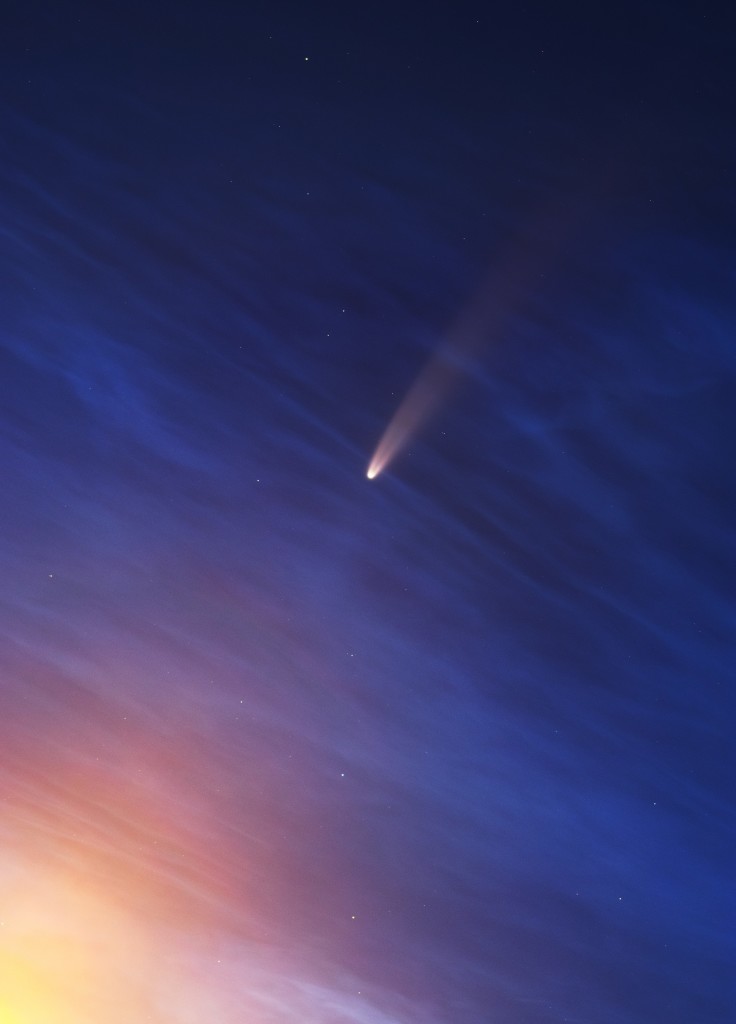 Q13: How do you think the future of astrophotography? What’s your wildest imagination about it?

The future of amateur astrophotography is very exciting. I imagine new and improved sensors. Better processing software. More advance features for the ASIAIR PRO such as mosaics and multi target acquisition. I imagine a mount that can polar align itself. Or a mount that has an integrated ASIAIR. =D  Thank for this interview opportunity.