James Gossage is the winner of ZWO 2020 ASIWEEK #22 and has brought us many extraordinary astronomy photos. To make our ZWOers know this excellent astrophotographer better, we make this interview. Let’s all take a look now.

Q1: Congratulations that your nice work won ASIWEEK #22/2020! Would you like to introduce yourself to us first?

Thank you for the honour of being selected for ASIWEEK.

My name is James Gossage. I am French and also have recently become a Kiwi and after residing in 8 countries, now live in the beautiful Bay of Islands in the far north of New Zealand.  I have a passion for astrophotography, traveling and playing swing music of the 30s and 40s.

The night sky has always been fascinating for me, but it became much more interesting and relevant when my father started working at NASA during my teen years. I started spending more time looking at the night sky and became more curious and eventually many years later – 2018 – got a telescope for visualizing and imaging. My images are on the ZWO Facebook page and under my Astro name “KiwiAstro” on Flickr, Astrobin and my personal website www.kiwiastro.com. 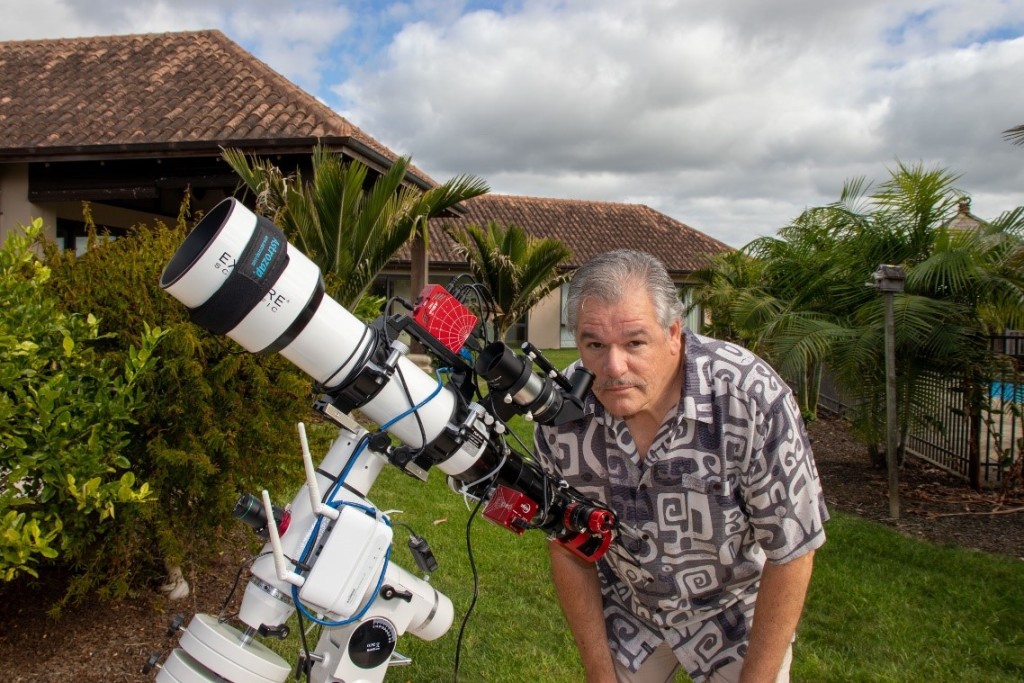 Q2: What equipment do you use for astrophotography? Can you show us some images?

As my targets are mostly Deep Sky, my main imaging rig is an ASI294MC Pro camera, ZWO EAF, ZWO filter drawer, ZWO OAG, ZWO Helical Focuser and ASI120mm mini for guiding together with an Explore Scientific ED102-FDC100 APO triplet refractor (focal length/ratio 714mm/F7) and Starfield 0.8 flat-field focal-reducer (FFFR) which brings the scope focal length/ratio down (571mm/F5.6), and an Astrozap dew heater.  All of this is mounted on a Skywatcher HEQ5Pro mount with Synscan WIFI.  Mount control and imaging/guiding is managed through the new ASIAIR Pro and the ASIAIR application on my iPad or android phone.

On occasion, if my target for the evening is a planet, my ASI224MC may replace the ASI294MC Pro and the FFFR is exchanged for an Explore Scientific 5x Focal Extender. 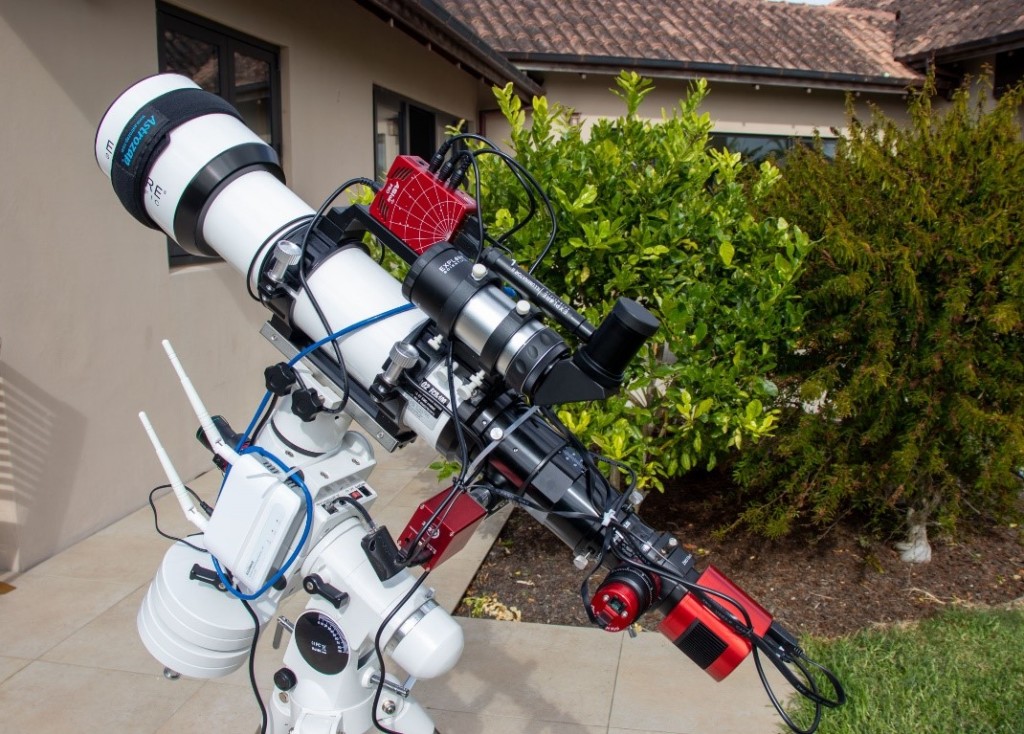 A couple of my favourite images captured with the ES ED102 and ASI294MC Pro are below. 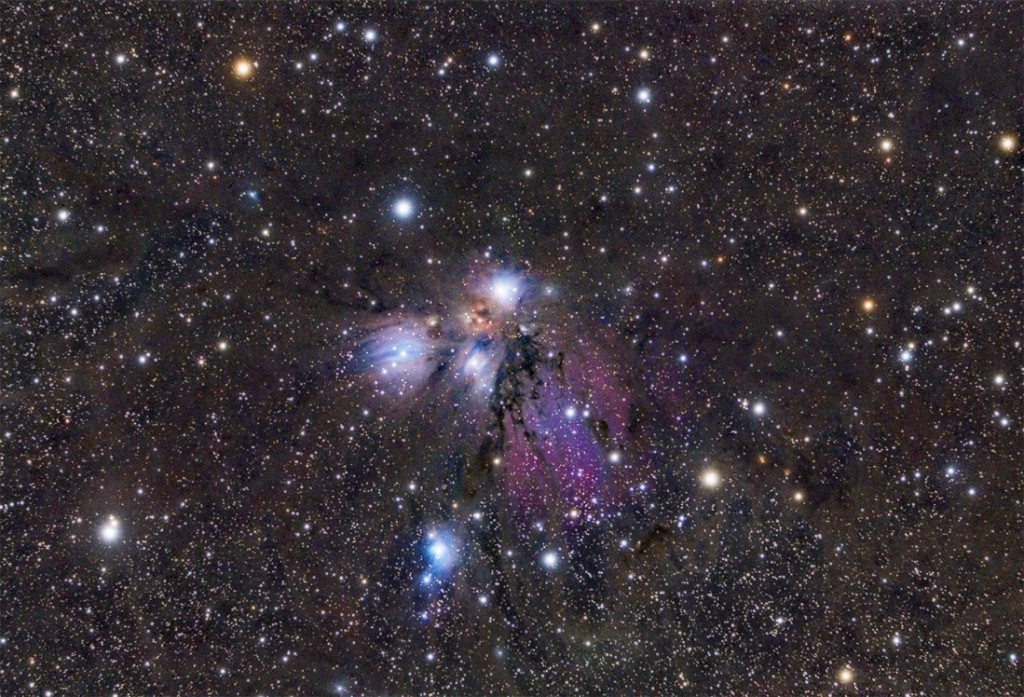 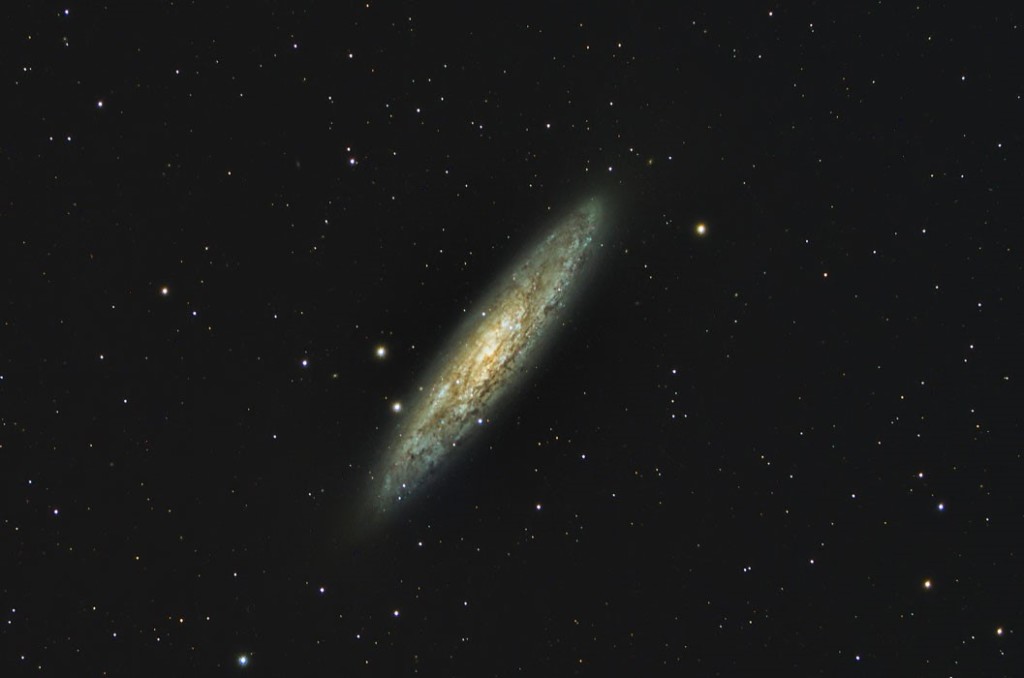 I found out about this comet and its position on the evening of the 1st of May so thought would give it a go and early morning on the 2nd of May, there was a break in the clouds around 430am. In a few minutes, the scope was outside, polar aligned and ready to go. I manually entered the RA and DEC into the ASIAIR Pro GOTO and the mount centred on the object. With an image plan set up in Autorun, I was able to capture a few images before the clouds covered my view. 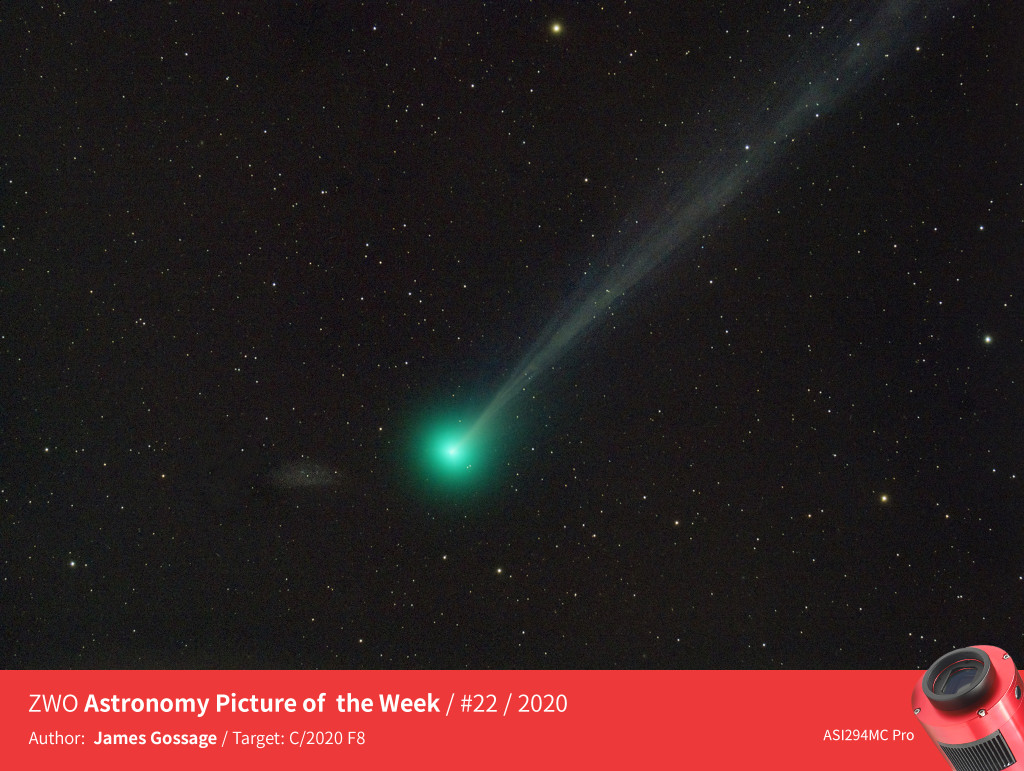 Q4: There is even a Wolf–Lundmark–Melotte galaxy in this image! Was it planned before or just a lovely accident?

Yes, that was some very fortunate timing and unplanned. I saw during processing that a faint galaxy was just to the left of the C/2020 F8 (SWAN) and found out that it is the Wolf–Lundmark–Melotte, an irregular galaxy located at 3.4m LY.

Q5: How many years have you done astrophotography? Can you tell what made you thought of taking your first astro image?

I had been hesitating to get into astrophotography as everything would be new for me (equipment, software, knowledge) but finally started in August 2018. Before this, I would look up from our dark sky location and be in amazement as so many things were visible to the naked-eye including the Milky Way, the Eta Carina nebula, the Small and Large Magellanic Clouds and so many other objects. My thought was “ how can I capture some of this”. 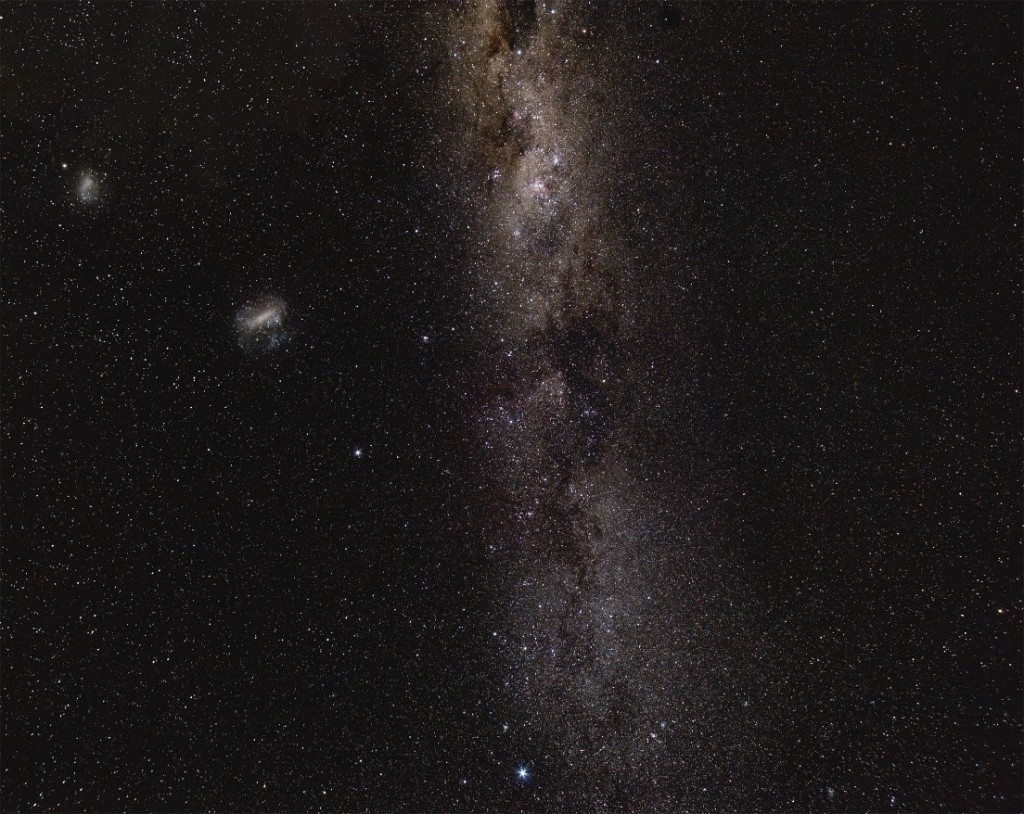 In August 2018, I purchased my first DSLR camera and a f/2.8 200mm fixed lens. Learning about imaging (f-stops, iso etc) and seeing some encouraging results, I found out soon that this was becoming a passion. In January 2019, I made the decision to go after more serious astrophotography and began research on different options which would be most suitable to my location and goals. In May 2019, I acquired a telescope, mount and suitable ZWO cameras and began the steep learning curve of getting into more serious astrophotography. Now, with the ASIAIR Pro my rig is complete.

Q6: Why did you choose the ASI294MC Pro? Is it a good fit for your telescope?

I did a lot of research for all of the equipment and of course the camera is a major component. I saw a few images captured by the ASI294MC Pro and how people were raving about it and its ease of use and then looked more closely at the specifications and compared with others. I was looking for a deep sky low noise one-shot camera offering the best value and quality for price and this one was being commented on as a fantastic choice for an OSC. As with other ZWO equipment, I purchased the ASI294MC from the ZWO website and received it 3 days later.

I have been very pleased with the camera as a whole – easy to use, great sensitivity, good natural colours and low noise, and that it can be used as a hub. It took me little while to understand and deal with the amp glow but now that is no longer an issue.

In addition to a great camera, the delivery, support and service from ZWO has been great. 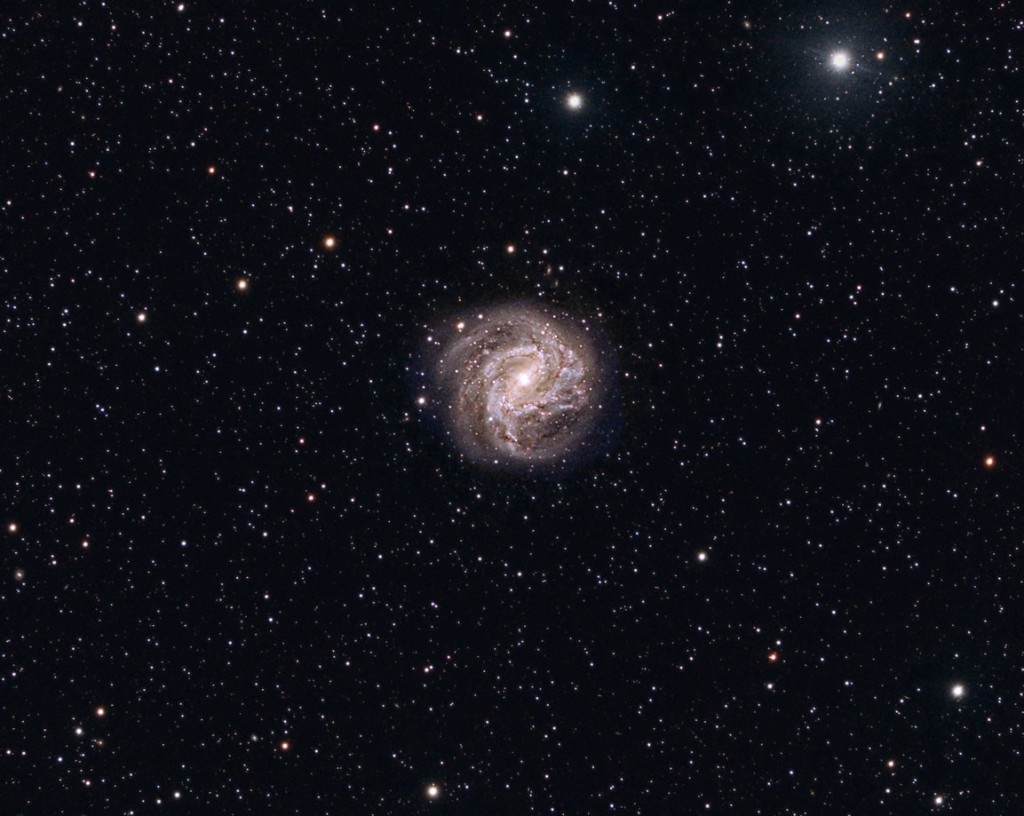 Q7: We noticed that you also have an ASIAIR PRO. Can you share with us your experience of using this little box? What features of it do you like most?

In April 2020, I received the ASIAIR Pro and thoroughly enjoy it – it has made my imaging night dramatically simpler as it offers the full solution in a single box. Overall, it has been easy to set up. I had to do a little bit of research on setting up the optimal WIFI connection as well as the setup for the Skywatcher Synscan WIFI so that the ASIAIR Pro can control the mount.

I particularly use and like the Polar alignment, object Search & GOTO abilities with auto-centring, Preview, Autorun/Imaging plan, and Guiding. No longer the need to setup a laptop with all the connections and run different software solutions to get the same result.  Also, it has been a major contributor to help me improve cable management. I would welcome an autofocus feature should that be available in the future. 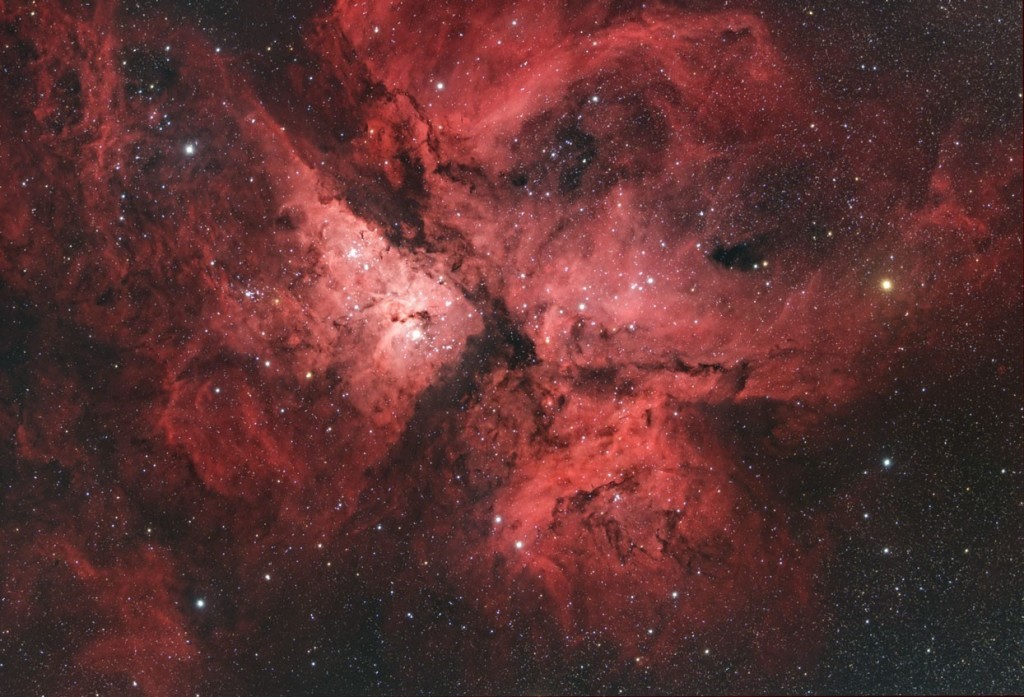 Q8: Have you tested the live stacking of the ASIAIR PRO? Where do you think we can improve this function?

As it was the first time I’ve used Live stacking on any software, I do not have a base of comparison with others but was pleased with how easy to set up and execute. I did not see how to set up an imaging plan so basically let it run for a period of time, checking the results every few minutes and definitely saw the results improving as the subs were taken. This allowed me to run “Live” feature longer and until I was satisfied with the overall results that would later be seen and further improved by using a specialised processing software. A combination of “Autorun” to set up an imaging plan and “Live” could be a “nice-to-have” feature.

Q9: What post-processing software do you use? People say the complex astrophotography software is the one of the reasons that makes newcomers tend to give up at the beginning. What do you think?

Being completely new to any image processing as well as astrophotography in August 2018, I found the process tricky with a lot of time spent on self-learning – with no astronomy clubs around the area, it was a very steep learning curve. Given astrophotography had become a passion, I was tenacious and finally got through the basics of the processing.  After 12 months, I became fairly comfortable and now tweak the process as needed depending on the object and exposure/gain/filter use.

For the last year, I use only Pixinsight for calibration, alignment and integration and main processing. I may also use astrophotography add-ons in Photoshop for final rendering of images, but these are usually minor adjustments. When doing a wide-view panorama, I have found Microsoft Image Composite Editor (ICE) to be very useful.

A few things which have been key for me getting through the steep learning curve have been to leverage online research of what others have done, do a little at a time, remain patient and have the time to redo processing when I’m not happy with initial results.

Q10: How is the air and observing conditions in your region?

We live in a bortle 2 zone in the Bay of Islands so there is little light pollution apart from the occasional passing car or the small town of Kerikeri about 10 kilometers away and opposite to where my imaging occurs. With no large cities closer than 3 hours away, there is only minimal pollution from the area.

Q11: Do you also use a mono camera? Which one do you like, mono or OSC camera?

For imaging, I only use an OSC (ASI294MC Pro). For guiding, I recently moved from the ASI224MC colour to the ASI120mm monochrome mini together with the ZWO Helical focuser. This means a little bit less weight on my rig and it frees up my ASI224MC for eventual planetary or lunar work.

Q12: What kind of expectation do you have for our new cameras this year?

I am unlikely to go for a new camera this or next year; however, my choice would be another ZWO camera – either a mono camera or an OSC which with higher resolution. My expectation on these would be based on my experience with ZWO products to-date – high quality, easy to use, great support, innovation and leveraging the best technology available in the market at a reasonable price.