My name is Luca Marinelli, I was born in Genova, Italy but have lived in the United States since I moved here for graduate school in 1995. I have a PhD in Physics and work in medical imaging research at GE Research in Niskayuna, NY. I am married and have two children, Nico (7 years old) and Matteo (5 years old), who share my passion for the night sky. They are especially fond of planets and can spot Jupiter, Saturn, and Mars on their own. 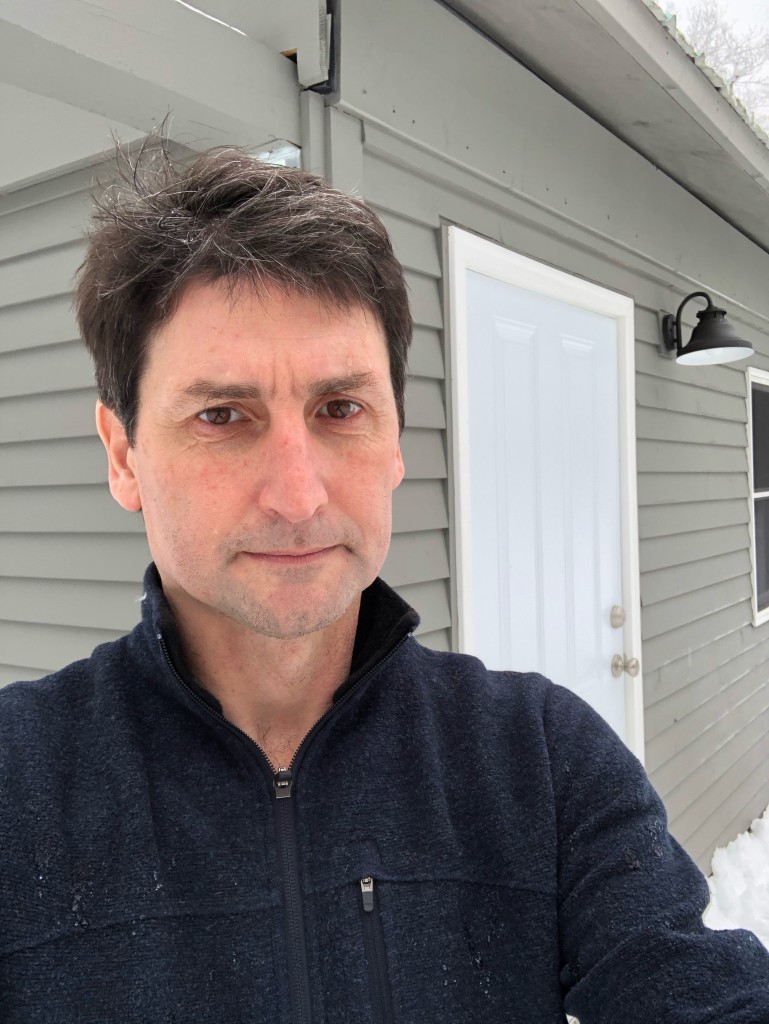 Q2: On a scale from 1-10, how much would you rate your obsession with astrophotography?

Definitely 10! I always jump into a new pursuit with both feet and astrophotography was no exception. I have had a passion for photography since I was in elementary school and some of my adventure and nature photography has been published in guidebooks, magazines, and catalogs. Three years ago, when Nico was about to turn 4, my wife and I decided to buy a small telescope to look at the Moon and planets. After some research, I bought a Celestron NexStar 102 SLT. As soon as I set it up, I tried attaching a DSLR to it. That didn’t turn out too well and I had caught the bug. Shortly after, I purchased my first equatorial mount and started using camera lenses to take images of the sky. As they say, the rest is history. 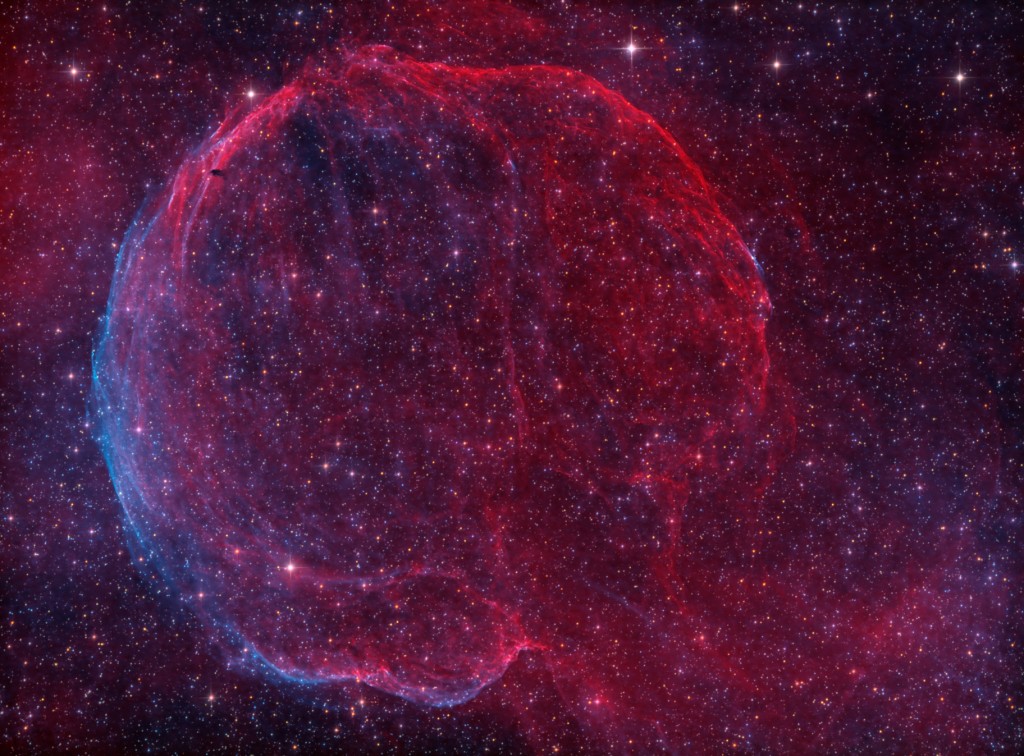 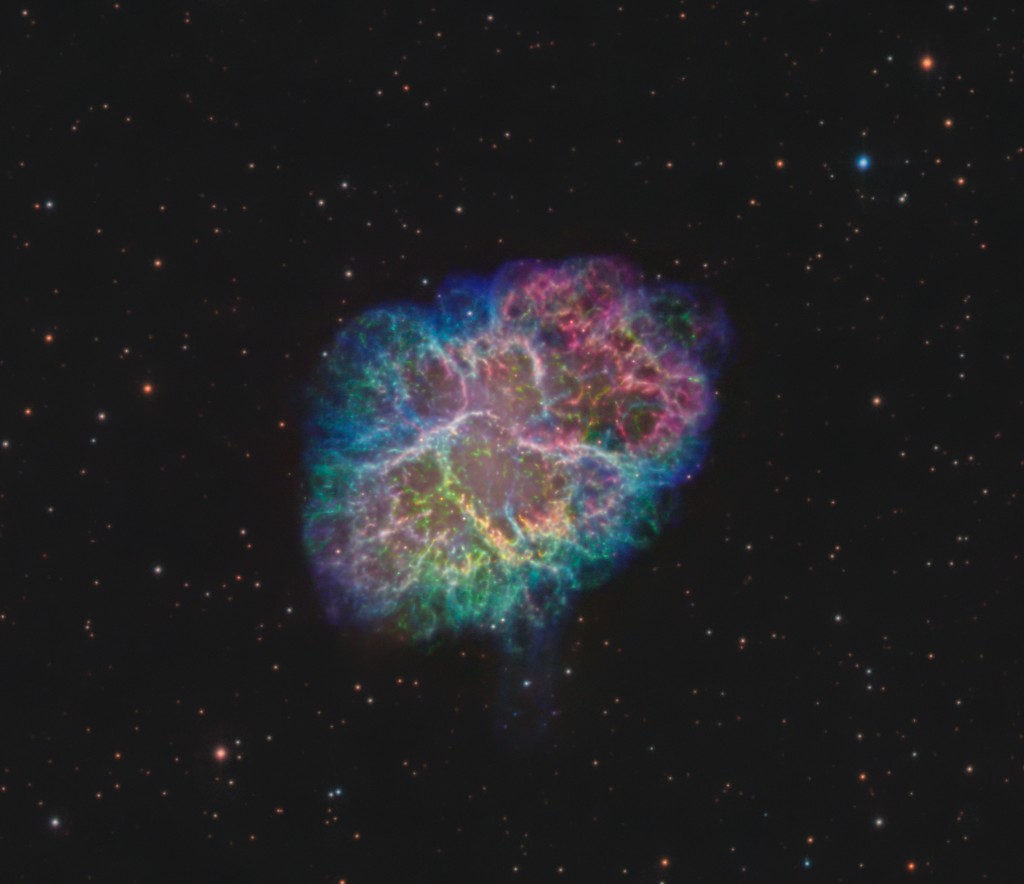 Q3: What equipment do you use? What kind of telescope do you prefer?

Currently, I have two equatorial mounts permanently set up on piers in a roll-off roof observatory: an Astro-Physics Mach1GTO and an Astro-Physics 1100GTO. I image with two telescopes, a wide-field setup with a Takahashi FSQ106 and a Newtonian astrograph Teleskop Service ONTC 10in f4. For the Newtonian, I use a TeleVue Paracorr Type 2 coma corrector. Given the average quality of the suburban skies at my house, I tend to image using narrowband filters and use both Astrodon and Chroma filters. 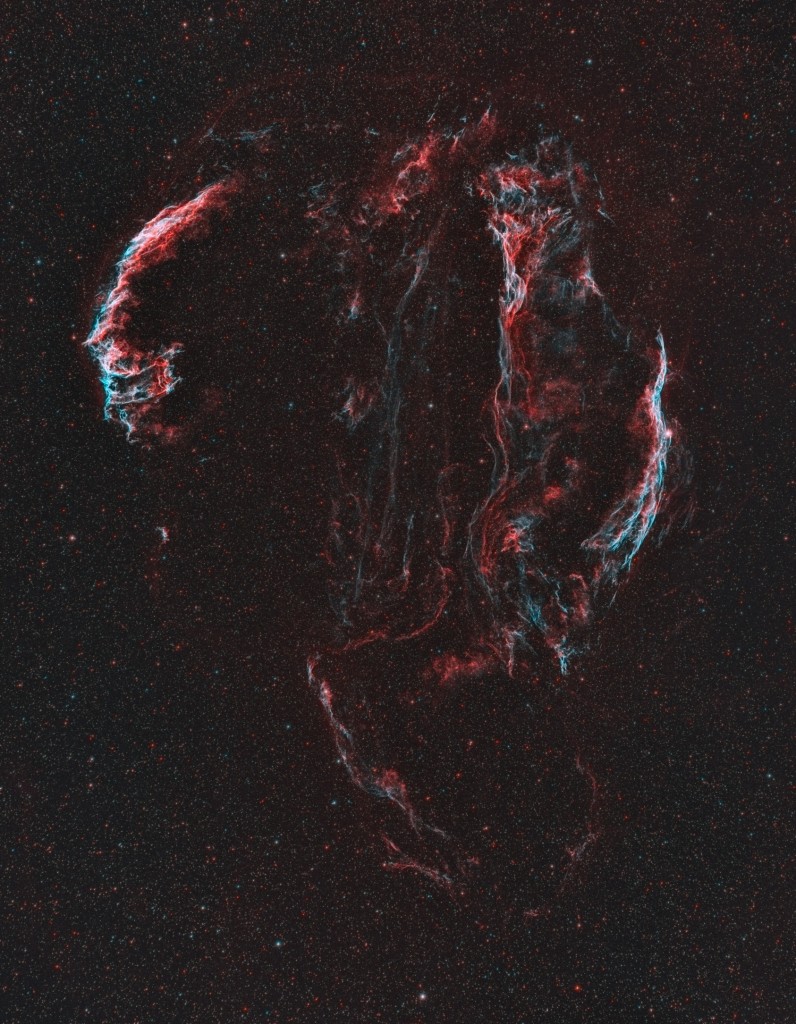 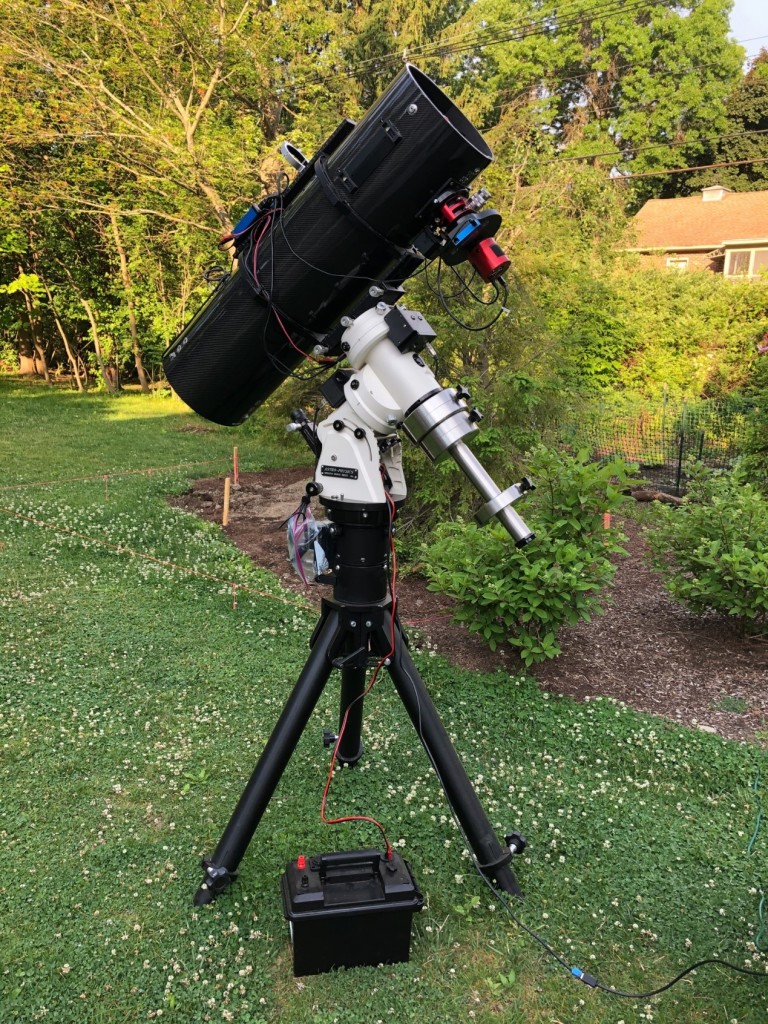 TS ONTC 10in f4 Newtonian with ZWO ASI1600MM Pro setup in the backyard prior to construction of the observatory.

This past Spring, I started exploring the idea of building an observatory in the backyard. Over the course of the Summer, I worked along a local contractor to design and build the roll-off roof observatory. I decided to put in two concrete piers and a gate motor to open and close the roof.  Roof automation is provided by Interactive Astronomy SkyRoof and SkyAlert system. I used to set up and tear down two imaging systems every night of good weather in the backyard and even using a few tricks to speed up the process, it is still lengthy. The observatory is truly transformational for my astrophotography. I can take advantage of even short windows of good weather in between cloudy spells. It is always ready to go and all it takes is a couple of clicks to turn on the power and start imaging. The observatory is not climate controlled, so the optics is almost perfectly thermalized as soon as the roof opens.

Since building the observatory, I have able to take on more challenging imaging targets that require significant integration time. Quality of the data has also improved dramatically with the same optics and mounts due to wind protection and stability of the piers. 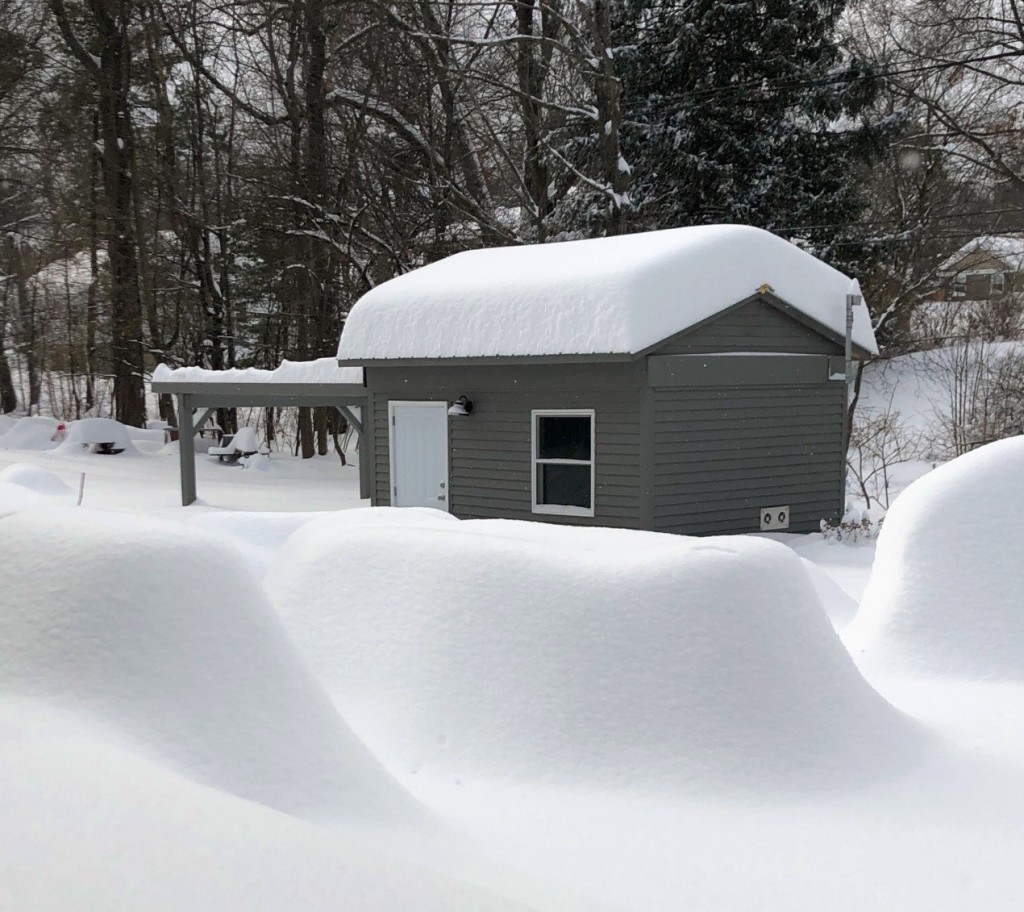 Q5: How did you go through the learning curve of astrophotography at the beginning period?

Because of my field of study and professional experience, I have a technical background in signal processing, optics, and control systems. The mechanics of image acquisition, calibration, and basic processing was not too difficult to pick up. My nature photography experience helped with the aesthetic elements of image composition. It is the finer control of astroimage data that required more time to master. Star shape and color, tonal transitions, background signal level are some of the areas in which I continue to improve as I learn new techniques and new tools for image processing become available. 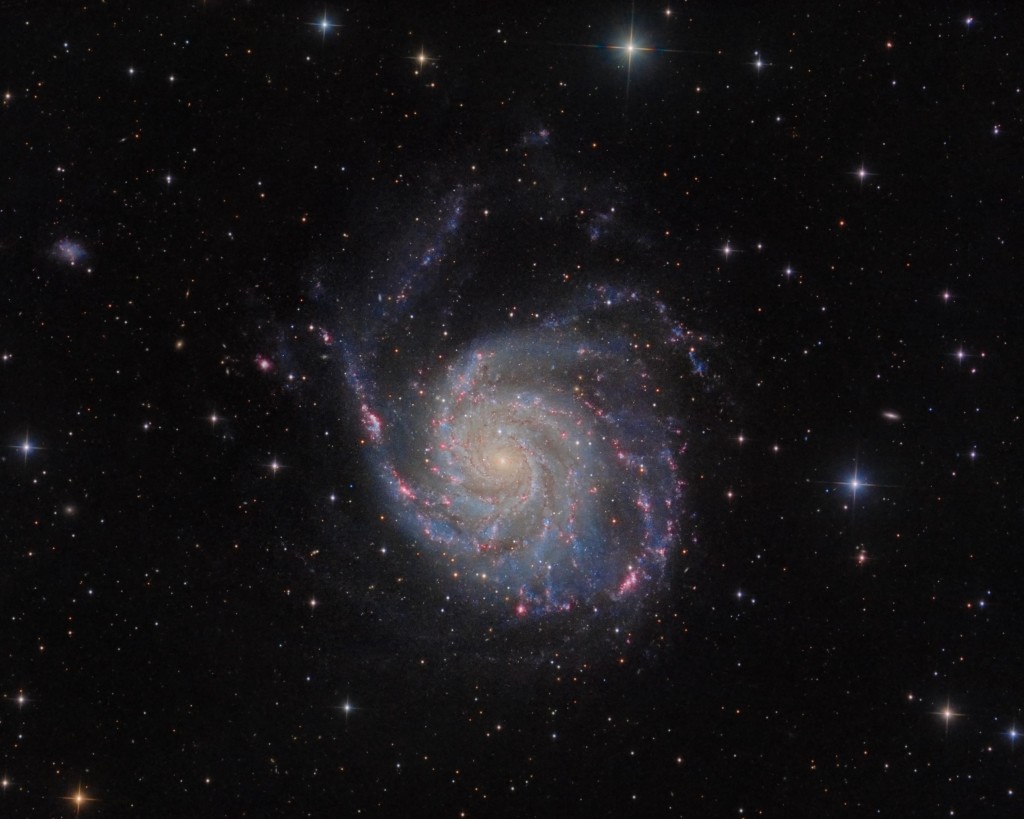 Q6: How long do you normally spend on processing after data acquisition? What do you think is the most important part of processing?

It depends, some images are pretty straightforward to process, especially when the targets are bright, or the dynamic range is not too extreme. Some of the more challenging images to process for me are mosaics or images with a mix of broadband and narrowband data. I tend to spread the processing over a few sessions. It is easy to get fixated on an image and go down processing rabbit holes. I find that if I still like the image the following day, I am on a good path. Sometimes when looking at the image after a good night of sleep, I decide to backtrack or even start over.

In my experience, careful image calibration and integration is the foundation for a successful image. I am pretty obsessive about selecting high-quality sub-exposures not to compromise spatial detail and signal-to-noise ratio, even if it means throwing out 30% or sometimes even more of the data collected. 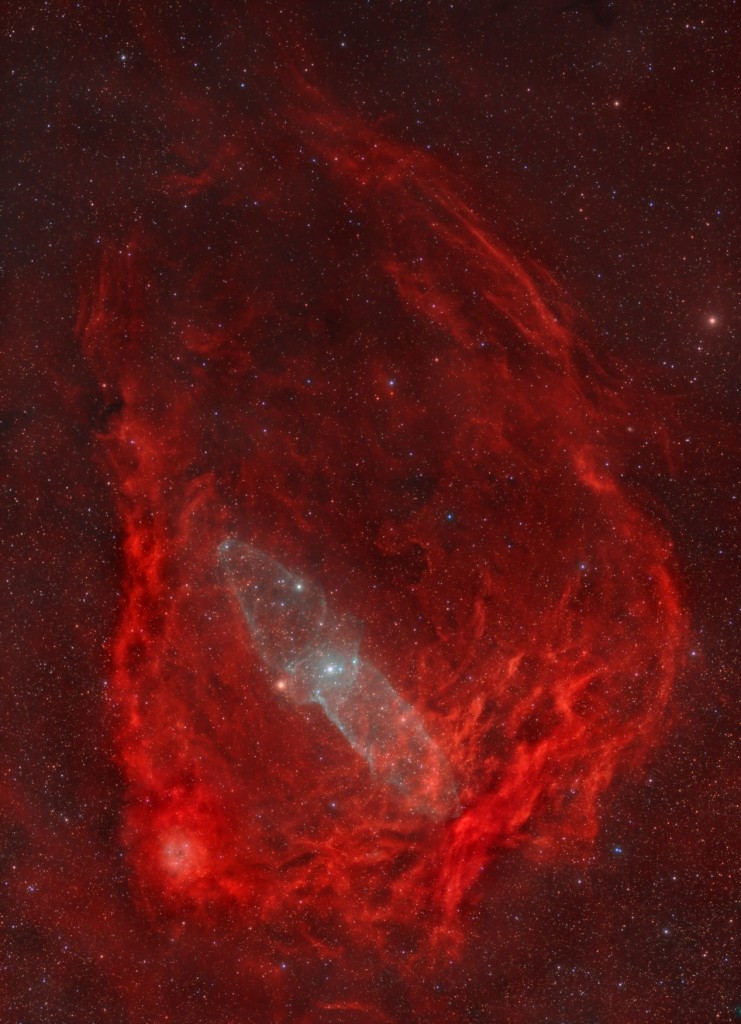 Q7: Do you have any unforgettable experiences during these years of astrophotography?

I had an unforgettable experience this past Summer when I was camping with my family at an extremely dark sky site in the Adirondacks Mountains in New York state. Comet NEOWISE was near peak brightness and I decided to carry a mount and the Newtonian telescope. I knew that with the family there, it would be challenging to spend the night imaging, so with a heavy heart I decided to leave the cameras at home. The clouds broke right around sunset, the Milky Way was so bright it cast a shadow. Both tails of Comet NEOWISE were visible with the naked eye and it was huge. At the eyepiece, the core was an incredible green color. I spent several hours observing deep sky objects in the 10in telescope. Conditions were fantastic and it was the best night of astronomy I have experienced so far. 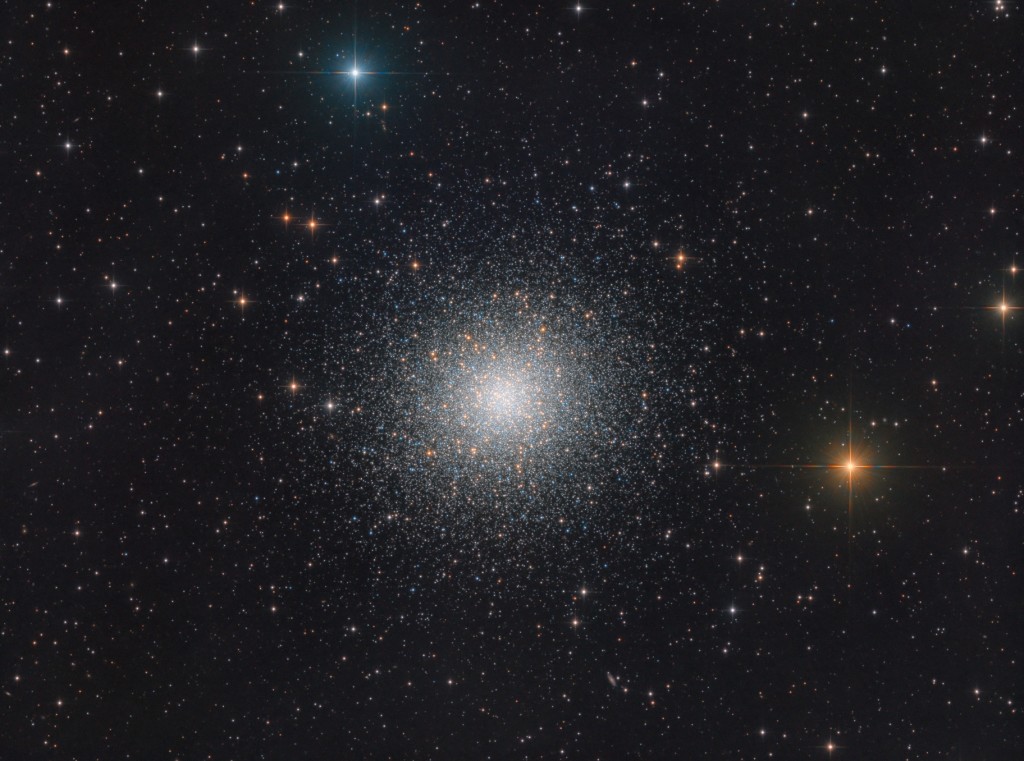 Q8: How do you know ZWO? What is your first ASI camera and why did you buy it?

I started using ZWO guide cameras, first the ASI120MM with a DSLR and then the ASI290MM Mini. My first CMOS cooled camera was the ZWO ASI183MM Pro. I was excited about the small pixels to pair with the Takahashi FSQ106 and it was a great camera to learn astrophotography. I later purchased a ZWO ASI1600MM Pro, which has become my favorite go-to camera, especially paired with the TS ONTC Newtonian telescope. The low amp-glow and good sensitivity make it a fantastic camera for narrowband imaging. I have recently bought a ZWO ASI294MM Pro and I am in the process of replacing the ASI1600MM with the newer generation back-illuminated sensor camera. I have also recently replaced the CCD camera connected to the Takahashi FSQ106 with a full-frame ZWO ASI6200MM Pro CMOS camera.

This past Spring, I bought a ZWO ASI178MC Pro to connect to a microscope and found the small pixels and high bit-depth perfect for microscopy. 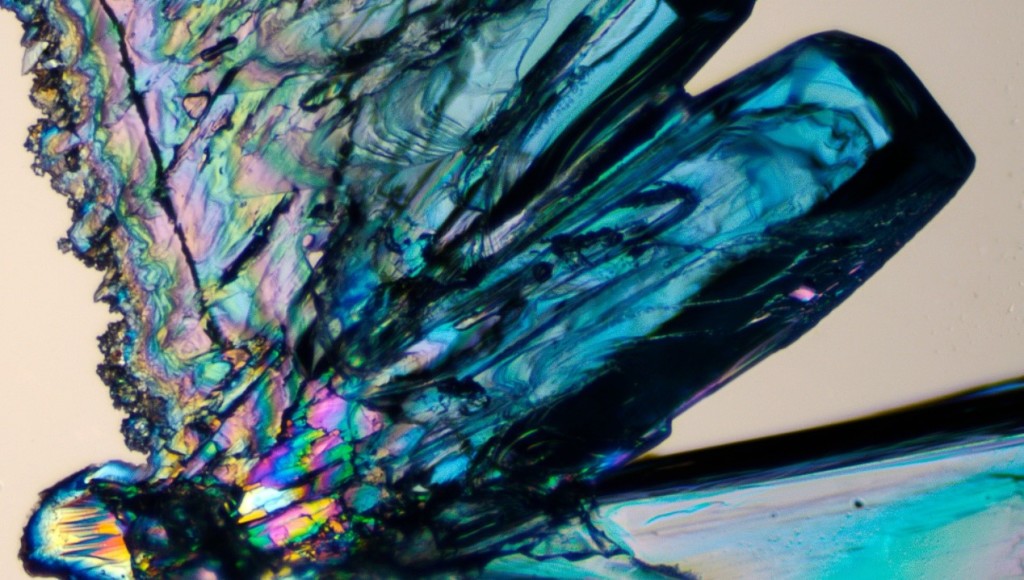 CuSO4 crystal growth on a microscope slide imaged in cross-polarized light under a microscope with a ZWO ASI178MC Pro.

Q9: Can you tell which ASI camera has a special place in your heart?

The ASI camera that I have learned to love the most so far, is definitely the ASI1600MM Pro. I have shot most of my favorite deep sky targets with this camera. Despite the well-known sensor microlensing limitations when shooting very bright stars, which had originally kept me away from this camera, I find it to be an extremely versatile camera that produces outstanding datasets. 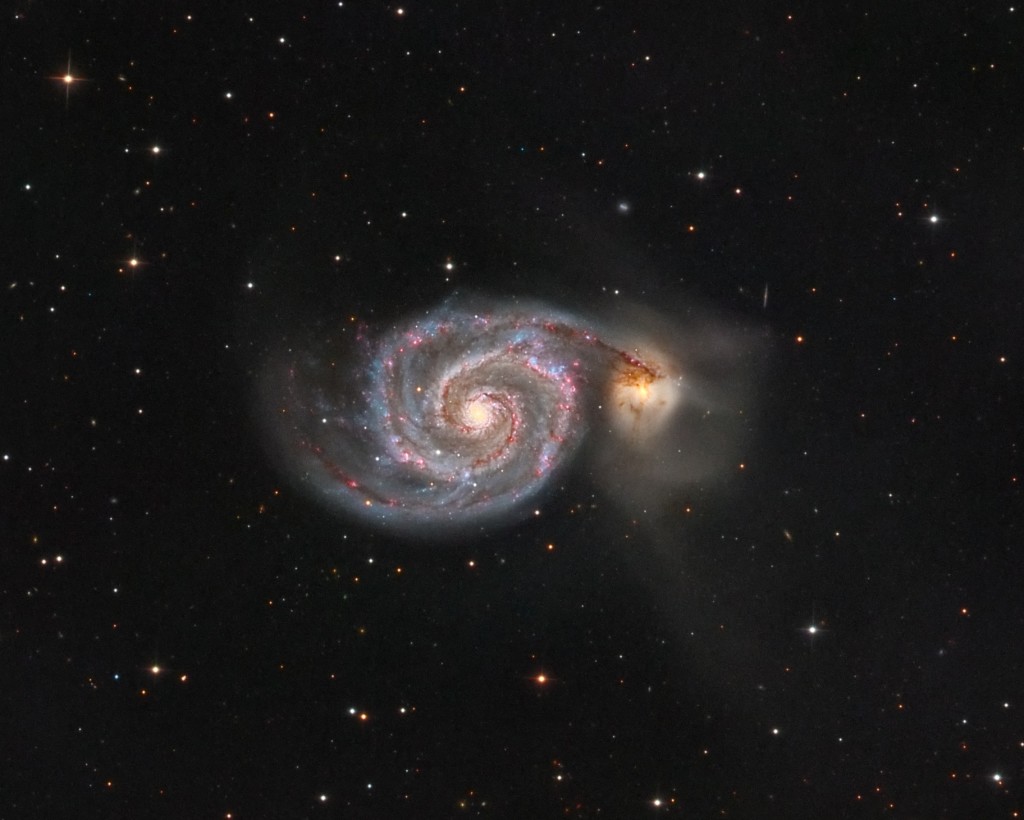 Q10: What suggestions might you give for a newcomer who wants to buy his first ASI camera?

To a newcomer I would recommend not to get too bogged down in the technical specifications of the different camera models. All cooled cameras in the ZWO ASI line-up can produce outstanding images. Pairing the right camera with the optics (pixel size) will maximize the chances of acquiring good quality data sets in a reasonable amount of sky time. I have imaged almost 100% of the time with mono cameras but the new generation of OSC cameras like the ASI2600MC are so good, especially when paired with fast imaging systems under decent quality skies, that challenge the common preconceptions about broadband imaging. 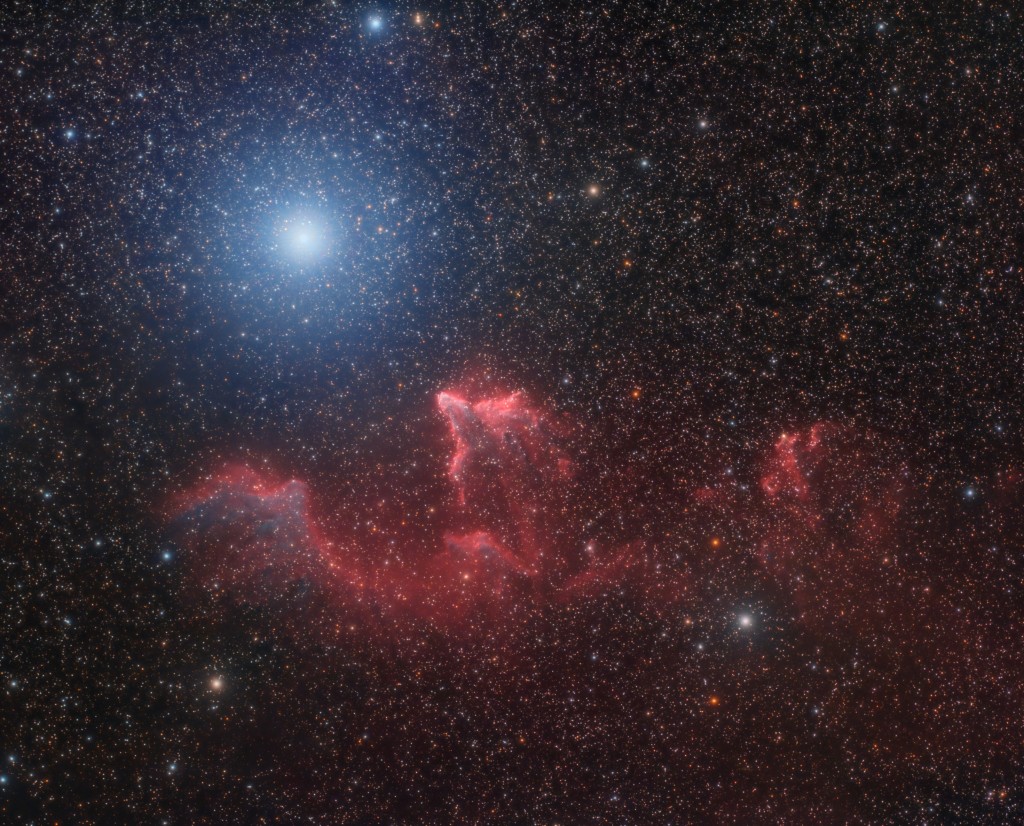 Q11: Is there any feedback you want to tell us?

I appreciate how easy it is to reach ZWO and how responsive the staff is. I want to thank you for bringing excellent cooled cameras to market and hope that you can be a voice for the growing community of astrophotographers to sensor manufacturers like Sony so they understand the needs and technical characteristics of successful devices for astroimaging. It is great to see that finally some of the best sensors are being released both with and without Bayer matrices, and I hope this trend will continue. 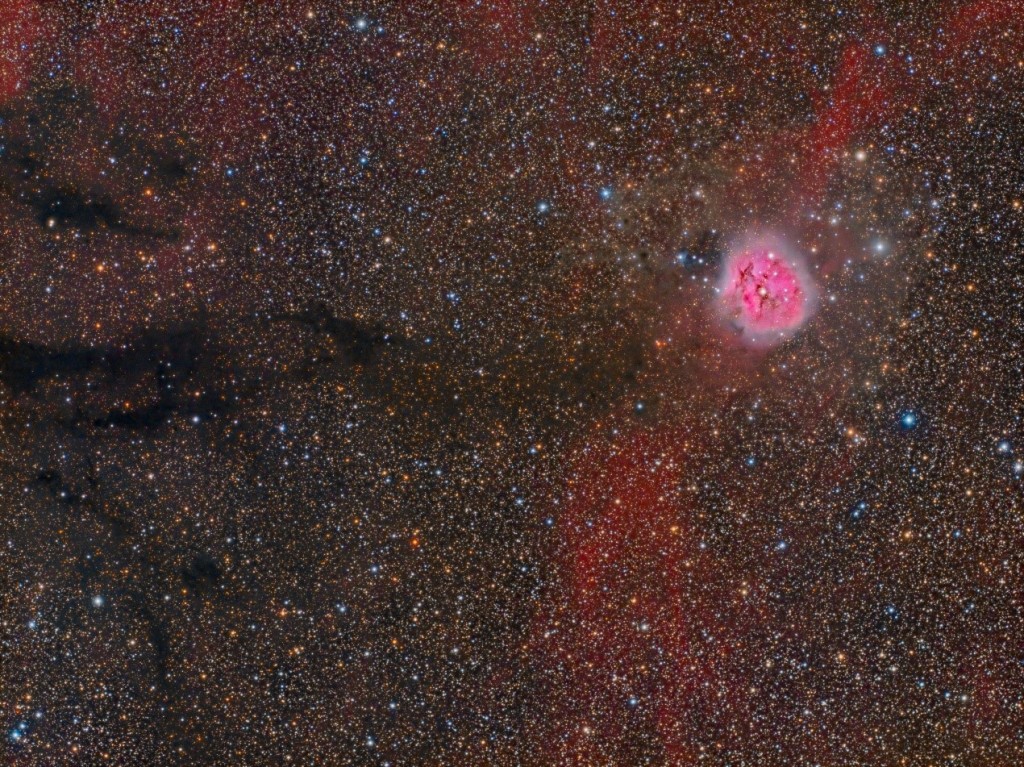 Q12: How do you think the future of astrophotography?

Digital imaging was a revolution in astrophotography. The images we can acquire today with small aperture systems blow film plates from thirty years with professional telescopes out of the water. Today, many CCD sensors are being phased out and CMOS sensors have ushered in a new revolution of affordable, large imaging devices. Broad availability of sophisticated computational resources has also enabled adoption of artificial intelligence based algorithms for image processing. The data and image processing tools that are now available to a much broader group of astrophotographers is unprecedented. Removing some of the technical barriers that limited access to high-quality data and sophisticated image processing techniques to only a handful of imagers will bring a fresh breath of styles and ideas to the world of astrophotography. 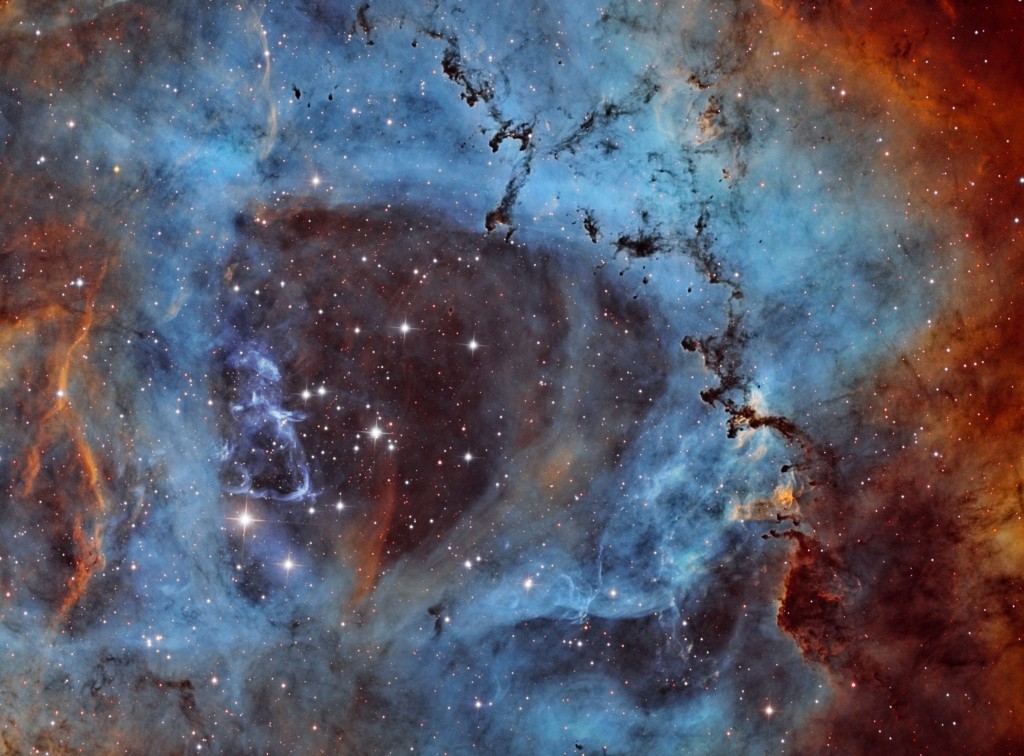 Q13: The year 2020 is going to end, what achievement have you made on astrophotography during this year? Do you have any goals for next year?

It is no surprise that 2020 was a challenging year. Balancing work and family during the COVID-19 pandemic challenged the amount of time I had to devote to astrophotography. Acquiring data is almost therapeutic, I enjoy watching the sub-exposures roll in, and I didn’t miss too many clear nights. However, setting time aside to process images was more challenging. I did not create as many images as in previous years, but I feel like I made a lot of progress in building a personal style. In 2020, three of my images were selected by Astrobin as Image of the Day, which was a huge honor, and of course I am humbled and excited that ZWO selected one of my images as Astronomy Image of the Week. In 2021, I want to continue exploring targets that are a bit off the beaten path. I really enjoy Sharpless catalog objects as well as some the more recently discovered planetary nebulas. It is always to image a classic target and I am sure that I will go after a few of those as well. 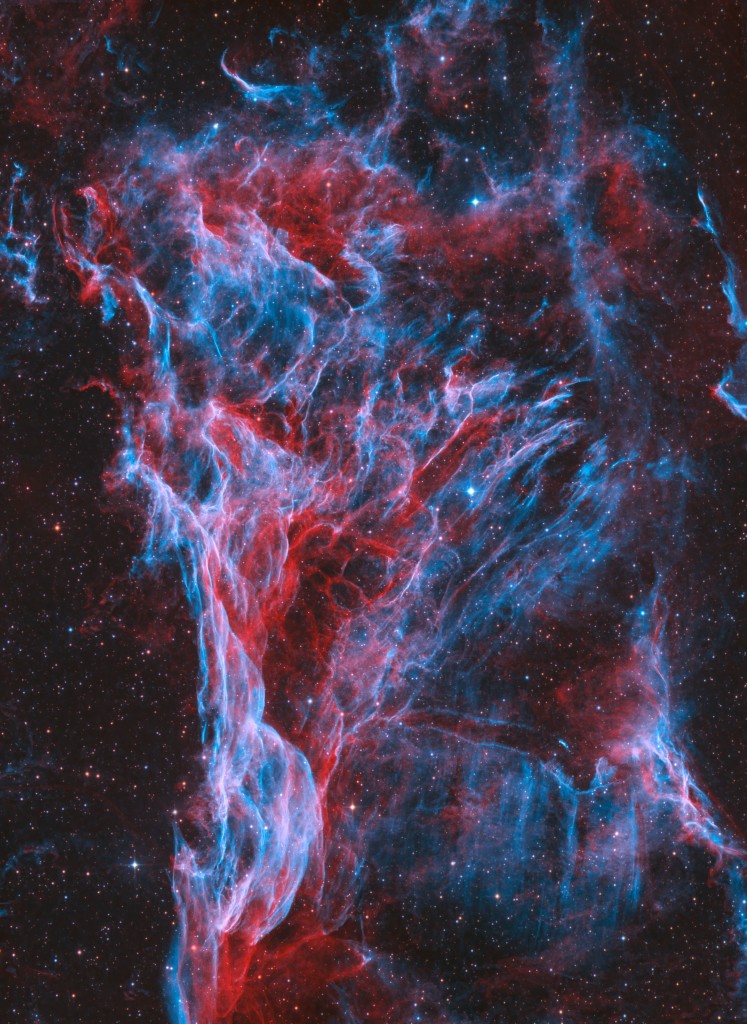