Lukasz Sujka is the winner of ZWO 2019 ASIWEEK #48 and has brought us many extraordinary astronomy photos. To make our ZWOers know this excellent astrophotographer better, we make this interview. Let’s all take a look now.

Well, thank you very much. I was little surprised because that was my first post and first photo shared on the group. It’s very nice that it was so warmly welcomed.

My name is Lukasz Sujka I’m 36-years old guy living in small village in central Poland together with my family.

I really love astronomy, astrophotography and running – so I’m trying to take care of this hobbies during some of my free time after work which is not really connected with it. Astronomy is my “companion” since 2008 when I bought my first telescope. It was Celestron 114/900 and I really remember first views of Satrun and The Moon from it. I started to spend more and more time on studying night sky and finding knowledge about equipment in the web. Astronomy started to be my real passion of life. And it stays with me until now – as my primary and most important hobby.

I love it because it’s giving me some rest from daily routine tasks and also possibility to feel this mystery of unknow, which is surrounding us when we are looking on a stars under really dark sky.

Q3: Do you still remember the first time you do astrophotography? How was your feeling then?

Yes, I rember it quite well. It was in September 2009 during star party in southern Poland (Jodłów). I used Canon 350D camera with old Revuenon 200mm/f3,5 on Meade LXD55 mount.

It wasn’t really advanced photography – just few shots to catch some most known objects like Pleiades (M45), Orion Nebula (M45) and Andromeda Galaxy (M31). I was focused and enjoyed of looking to different scopes which we had on observation field. Later when I downloaded pictures to computer at home, and when I saw results, I was really excited and happy how much I caught.

My first images of deep space objects – it made me happy and more dedicated to that hobby. 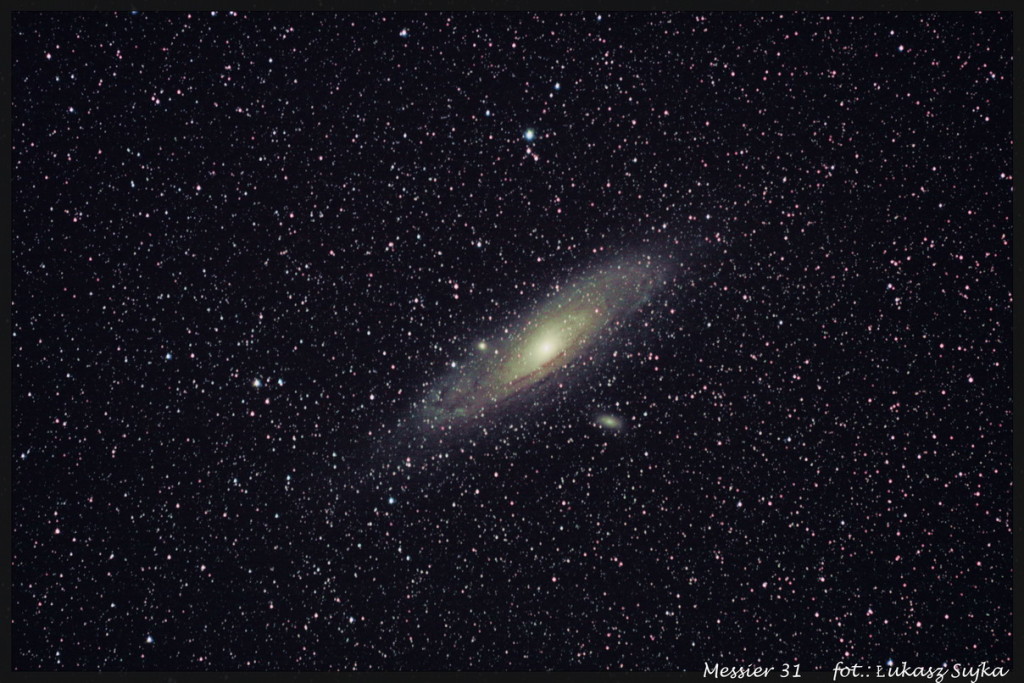 Q4: What equipment do you use? Can you show us some images of your gear?

All of this is riding on Sky-Watcher modded NEQ-6 equatorial mount.

Of course very important piece of this setup is ZWO ASI 178MM-C camera with proper set of filters: Baader LRGB, Baader U (for Venus clouds) and some of different IR filters (680, 742 and 850nm) 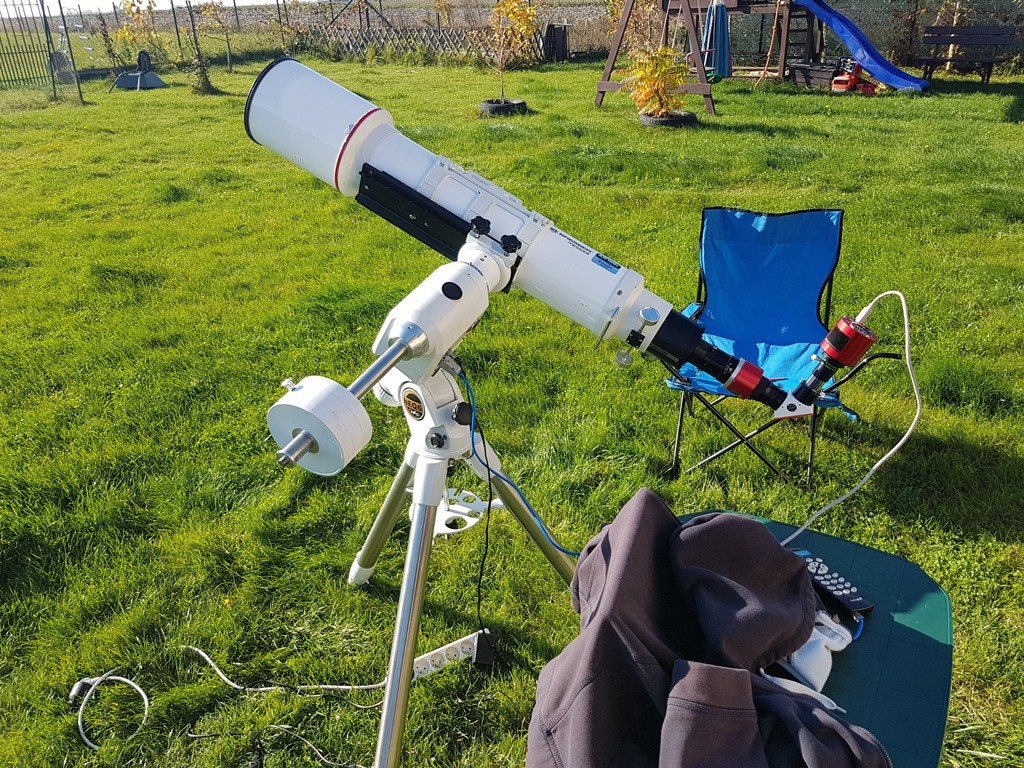 Q5: What type of telescope is your favorite? Why?

It’s hard to say which one is favourite, because every telescope contruction have it’s pros and cons. For examle it will be really hard to use reflector telescope for solar h-alpha imaging. On the other hand, I love to use big 10-16” reflectors in deep space astrophotography where it can collect a lot of light and allow us to make pictures of small and unusual objects.

Q6: Which one do you prefer? Planetary imaging or deep-sky imaging?

Well, this is one of my favourite questions. What I’m trying to do, is to be universal astrophotographer. That’s why I’m making photos of Sun in h-alpha band, deep space objects using short exposure (lucky imaging) technique, planets and our Moon including some extra phenomenons like conjunctions or transits. 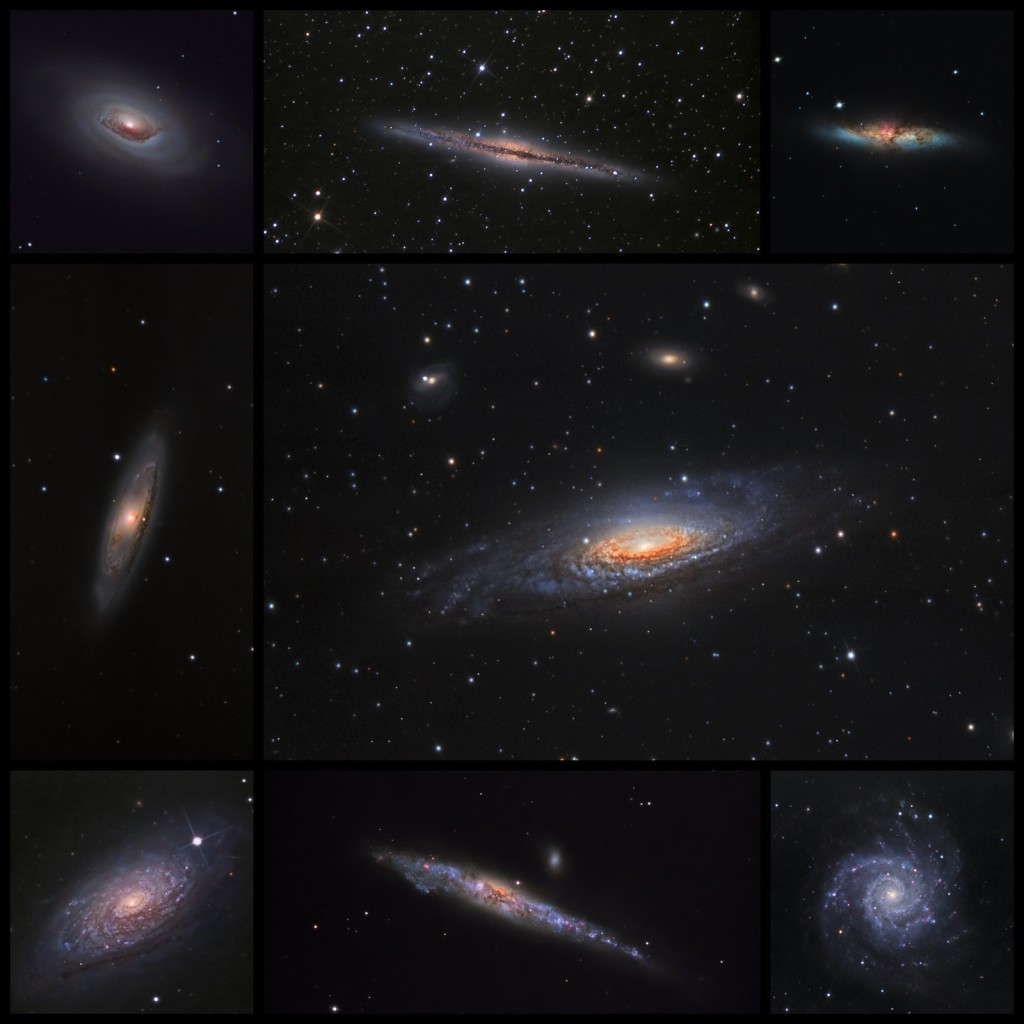 I cannot say which I prefer. I love to do all. Different objects demand different attitude and different technique – and this makes this photography so fascinating, demanding but als brings a lot of fun. 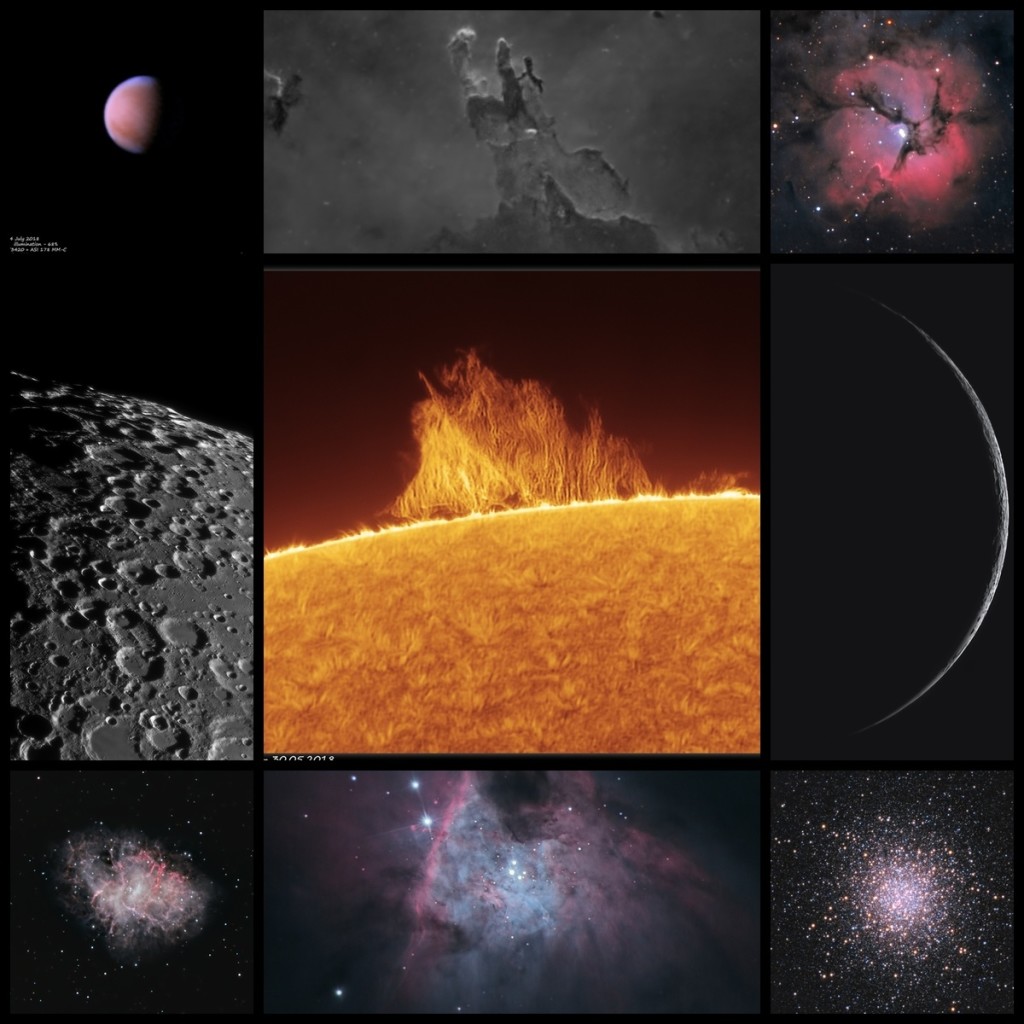 Composition of different photos from 2018

Q7: What’s the most difficult part of astrophotography for you?

There are two things I think – challenging weather and night

I love sleep – ant it’s really demanding from me to stay up late during night and to be active and in good mood next day.

And the second is weather – and this is something which we cannot influence unfortunately.

In Poland we don’t have a lot of clear nights, so you need to be flexible and plan well if you want to be successful in astophotography on our latitude.

The rest is managable 😉

Q8: Have you ever traveled to a very dark place to do astrophotography? How was that like? Any picture taken in there?

I’m travelling to that kind of places quite often. Well, maybe not extremly dark but much darker than my usual area of living.

3-4 times a year we have our star parties in Polish Bieszczady mountains where we have solid Bortle 2 sky conditions. This kind of sky allow to see much more than in central Poland and also to make astrophotography more efficient by delivereing better contrast and photo range. For example – luminance for that photo of NGC891 was collected under this kind of nice sky conditions – thanks to it – I was able to reveal some really thin and nice detail of galaxy dust belt and also to reach nice contrast between object and background. 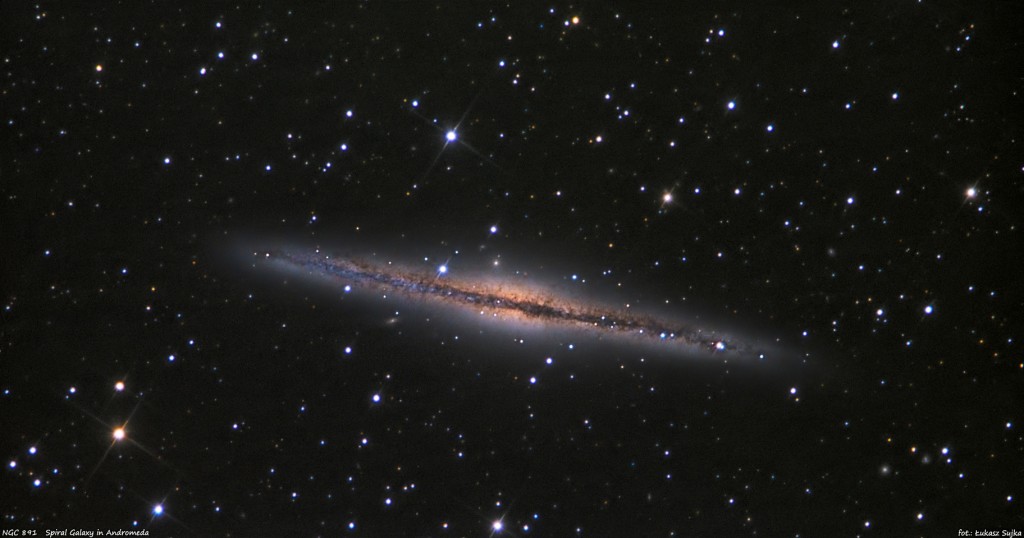 Q9: As to your winning image M51, would you please tell how did you capture it? Would you like to share with us some detailed camera settings?

This is something which can be interesting I think.

For this image I used short-exposure astrophotography technique (somtetimes people call it also lucky-imaging which can be a little tricky because clear lucky imaging is when we are using really short subs like for planetary imaging – 5-10ms).

Then we can make selection of best frames – using software or manually.

Manual attitude is of course more time consuming but much more effective at the end. After selection we are stacking them to reveal detail and achieve nice s/n ratio which will allow us to stretch photo and show big, sharp and clear detail at the end. 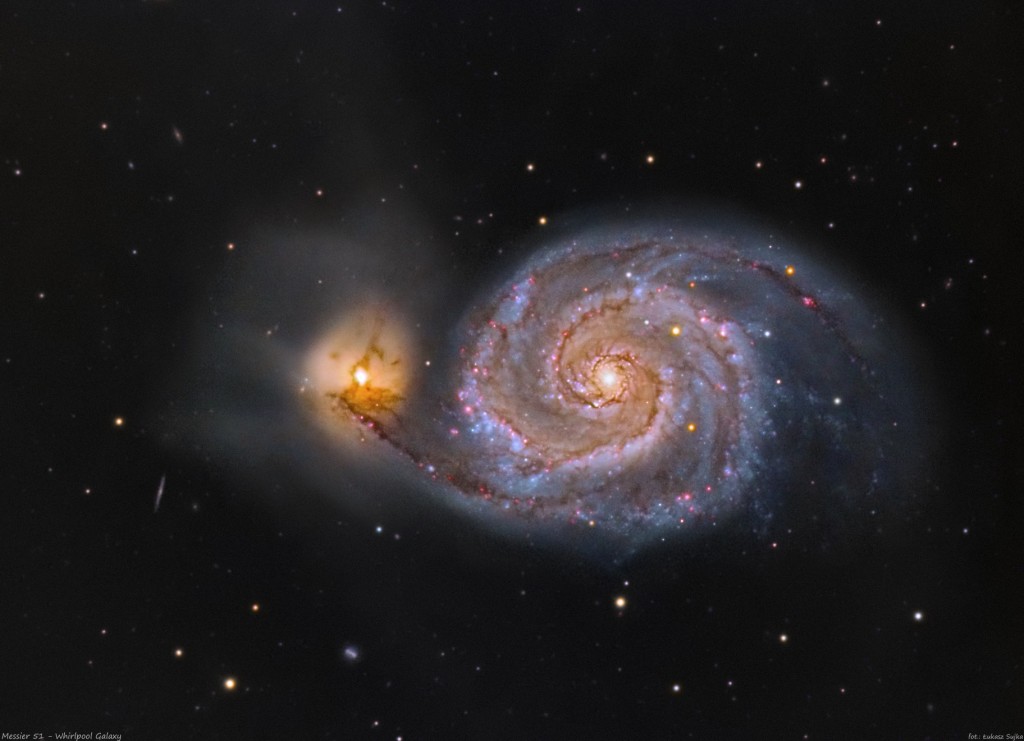 For Messier 51 photo I used setup and settings like below: 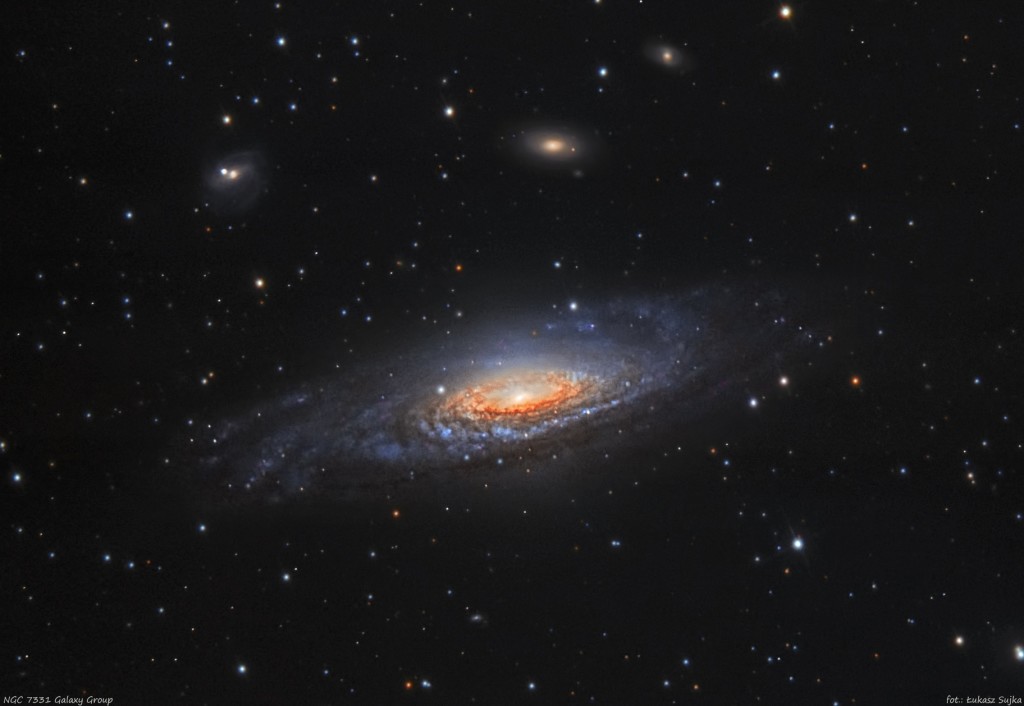 Q10: How do you like the ZWO camera that you used to take the winning image? And do you use any other ZWO products?

I really enjoy ZWO ASI 178 MM-C (cooled) which I’m using now. It has good parameters – really fits my needs in short exposure astrophotography. Low redout noise allows to reveal a lot of details even from short subs and small pixel create nice scale (0,41”/pix) allowing me to show lot of detail in most known objects but also to make pictures of tiny galaxies or planetary nebulas.

In my setup I also have ZWO  EFW 8-position filter wheel and IR filter 850nm for planetary imaging.

In past I used  ASI120MM and ASI178MC cameras. But I decided to move to mono and cooled one finally.

Q11: What do you think is the biggest advantage of ASI cameras? And what do you care most while buying an astro camera?

I will be liar If I say that price is unecessary. It is. But in that ZWO has really good “price to quality” ratio.

Aside price – I like products from ZWO because I didn’t have any problems with it. It’s plug&play, always working and have support in majority of astro software. And in ZWO offer there  is also a nice selection of cameras with low readout noise which is the most important parameter for me which I’m considering on the first place. Then of course resolution, senstivity and full well, but readout noise is most important. Q12: One last question: what’s your impression of ZWO? Do you have any feedback and suggestions that want to speak to us?

To be honest the first though, when I’m talking about ZWO, is “plug & play”. This is only brand where I didn’t have any issues with connections, stability and it worked with every software I used. Astro equipment is really demanding in case of connecting, creating setups and configuration so it’s really valuable when you are just connecting camera or filter whell and it’s working.

It’s also very nice that ZWO is sharing all of technical data of their products. It’s very important for advanced users who wants to create some nice setup.

For future – I will be very happy if there will be some mono camera in offer of ZWO, with 10MPix resolution and readout noise below 0,8 e- or less. That would be really cool equipmnet to play with short exposure astrophoto. 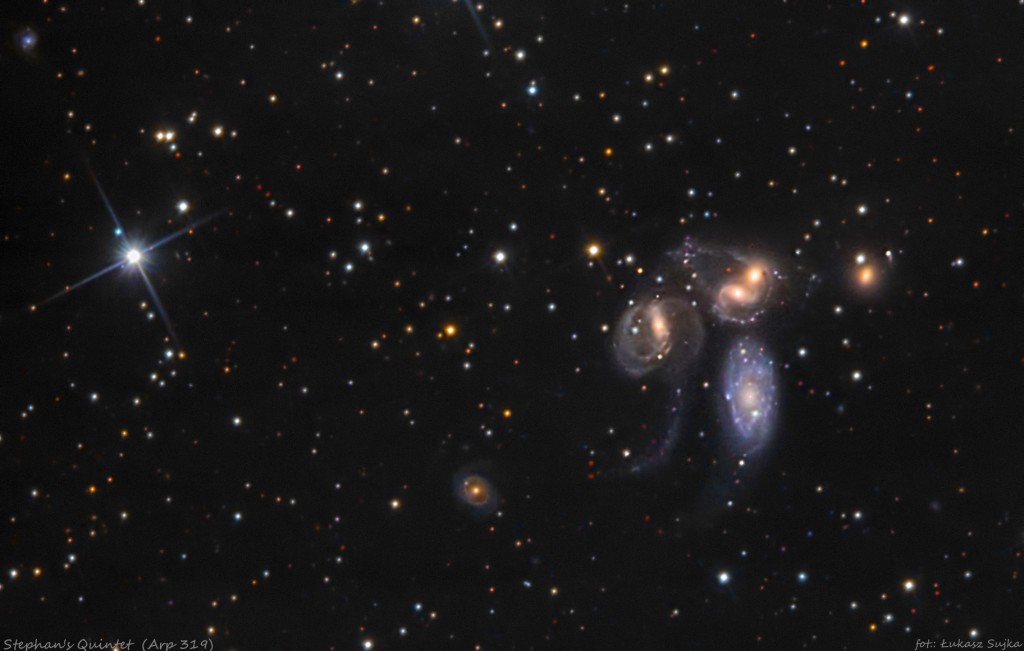