Thank you ZWO for the recognition. My name is Yannick Akar and I live in southern Germany. I’m  27 years old and work in online marketing and as a digital media manager. I love astrophotography, editing and strength & fitness training. Q2: Why do you love astronomy?

The night sky has always fascinated me. As a child I started looking at the photos taken by the NASA’s Hubble Space Telescope and was amazed by the beautiful images it could achieve.

Around 3 years ago I decided to go all in and invest in good equipment to finally start taking breathtaking deep sky images by myself. Since the day I saw the first frame taken by my mono camera and narrowband filters there was no going back and I try to spend as much time as possible to perfect my skills in capturing and processing. 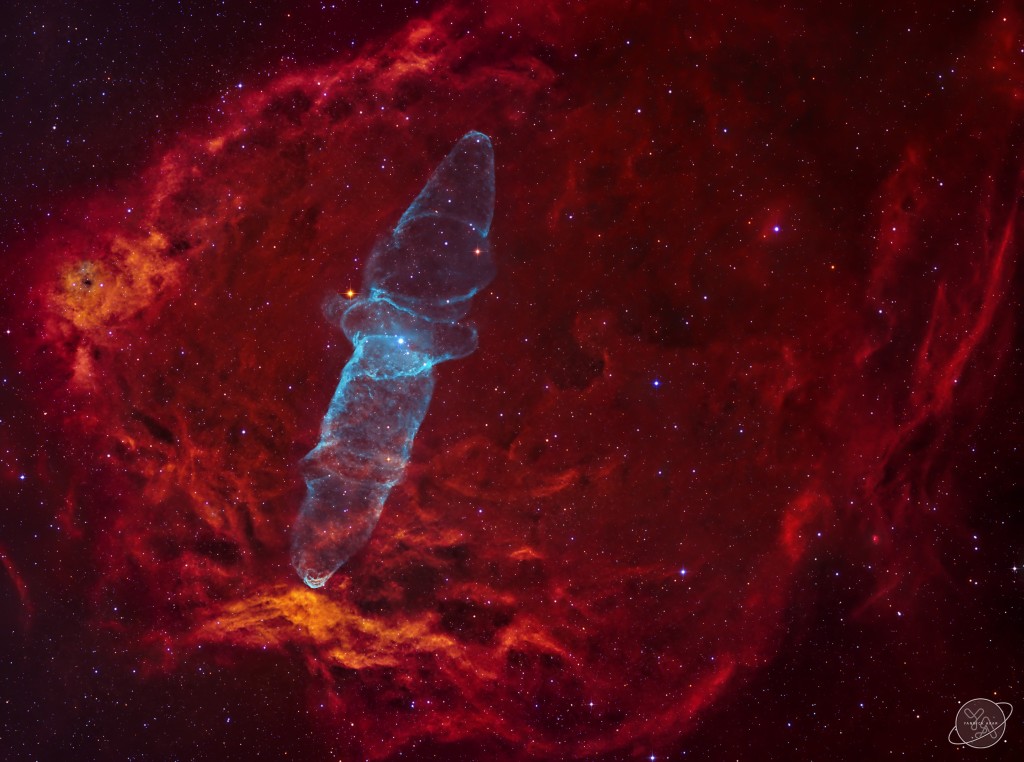 Q3: Do you still remember the feeling when you first saw something from the eyepiece of the telescope?

That’s hard to tell as I was never really interested in visual astronomy in the first place, this is one of the reasons why I invested in a Celestron RASA as this telescope is for photography only. But I definitely remember the first time a saw an image popping up on my computer, it was a breathtaking moment, that I will never forget! 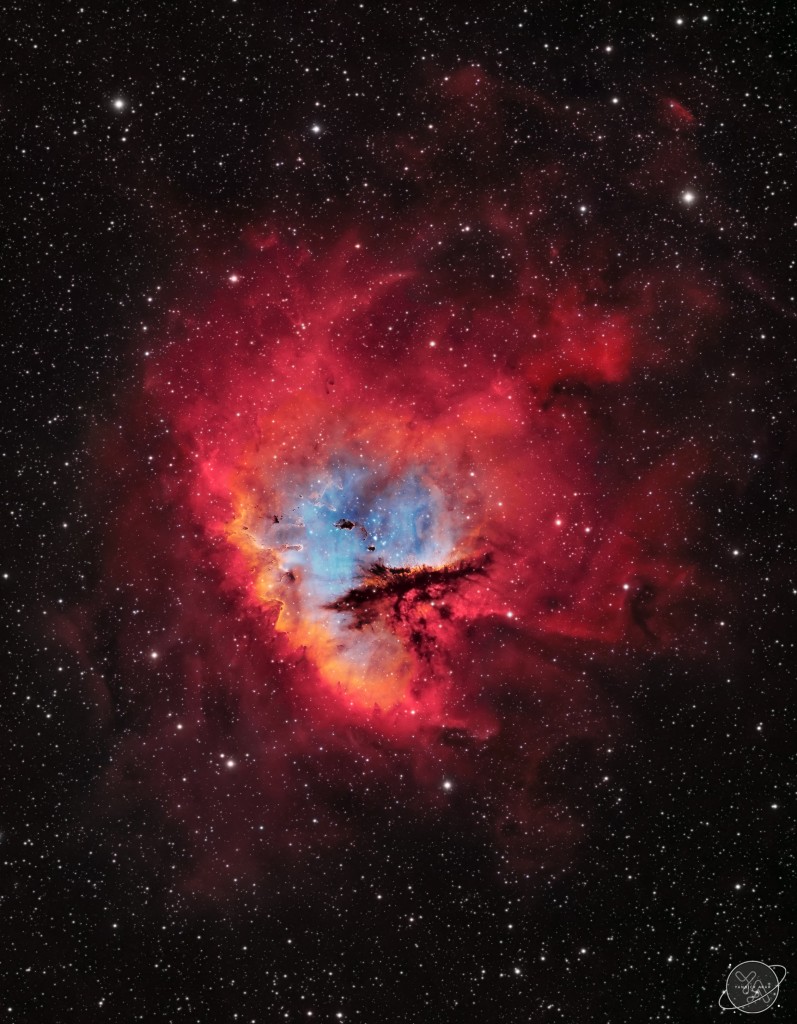 Q4: What equipment did you use when you first started astrophotography? What was your first target?

I started astrophotography about 3 years ago. First steps were with a small newton telescope and a Canon 50D on a manual EQ-3 mount. I have to admit the results were more than underwhelming and not at all what I have imagined as I looked at pictures from other famous astrophotographers. After some time I decided to upgrade my setup to step up my game.  The first target I ever imagined was the North American Nebula in Cygnus.

Q5: What gear do you use for now? Can you show us some photos of them?

I live under heavy light pollution (Bortle 7-8), so I almost always shoot in Narrowband only. My primary rig is mainly equipped with the following optics and accessories: 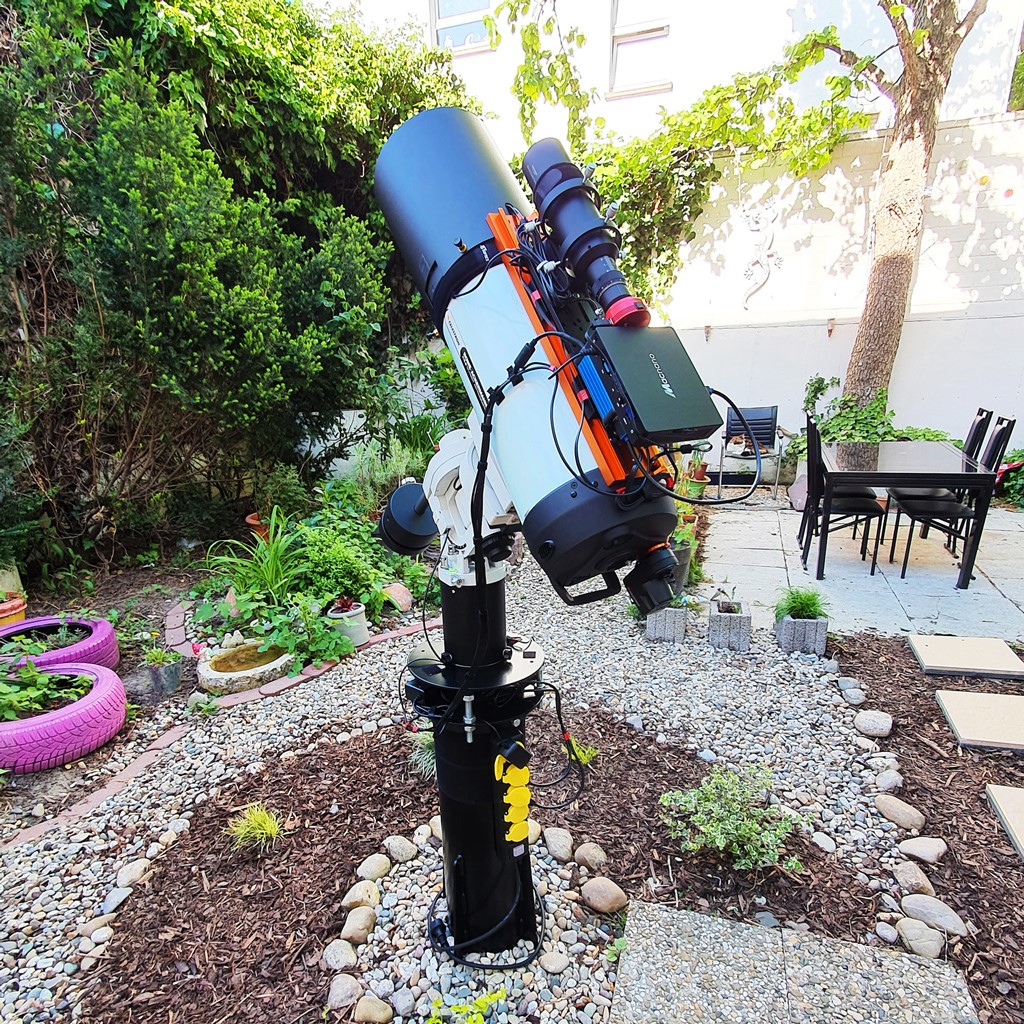 The Rig I started Astrophotography with and I mainly use for smaller objects: 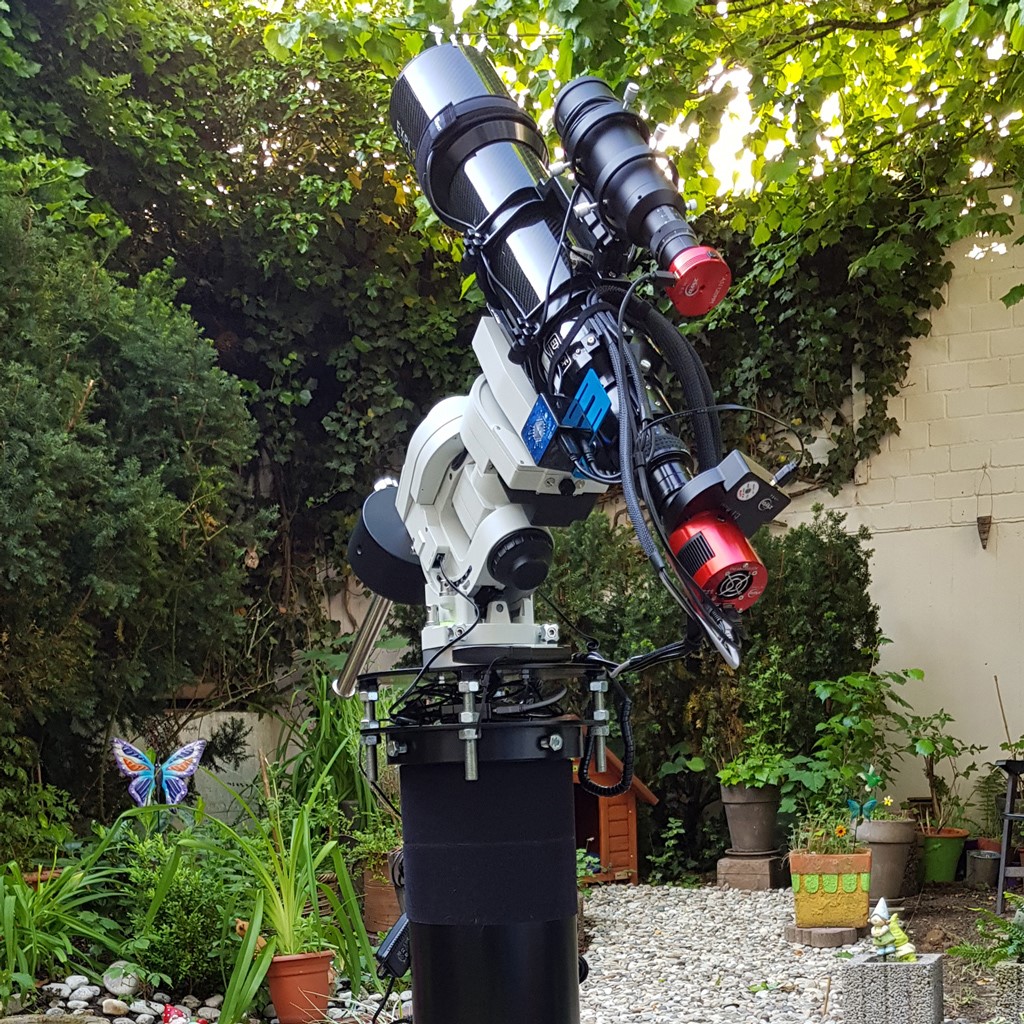 Q6: Would you mind telling us how did you capture your winning picture Lion Nebula? Was the whole progress rather smooth?

Interestingly the Lion nebula was actually a side project next to my main project, the Flying Bat and Giant Squid Nebula, which took the whole summer. I was lucky to get lots of clear nights in August and September 2020, so I started capturing the lion nebula on 10 different nights between other objects. All in all around 34 hours of good data came together which helped with processing dramatically.  At that time a well-known Astrophotographer named Eric Coles came up with a new technique to process narrowband images using multiple layers in Photoshop. It looked like a super fun way to step outside the box of traditional processing, so I tried my luck on the lion nebula and came up with 2 different outcomes. Q7: Do you have one favorite target or region in space?

I imaged one of my all time favorite objects last winter, which is Sh2-199 – The Soul Nebula. Two objects that are on my bucket list for years now are Sh2-308 – The Dolphin Nebula and NGC2244 – The Rosette Nebula, I hope to capture them very soon! Q8: How long do you normally spend on processing after date acquisition? What’s the most important part of this stage do you think?

I think post-processing is one of the most important and fun parts in astrophotography, so I often spend countless hours on processing. It all depends on the captured data I’m able work with and the difficulty of the object itself. On the Lion Nebula the time for post-processsing without the stacking step was more on the easy side with around 15 hours, on the Iris Nebula and the Flying Bat/Squid Nebula, processing took around the 35-45 hour mark. In my experience, the most important part in processing is the stage of image calibration and integration by selecting only the best images of a night of imaging followed by Deconvolution and noise reduction. Also a very important step about processing an image is to decide when it’s done and not to totally overprocess it!

Q9: What picture style do you prefer when processing? It seems to us that some of your astrophotos tend to be very artistic (We love them for sure!)

As I live in severe light pollution and I’m also very limited to objects that I can capture from my backyard I have no choice but to capture them with narrowband filters. As it’s all false color anyway I’m very free with the way I’m able to present different targets. For me the ultimate goal in this hobby is not really about gathering or showing scientific material (there is plenty of professional material anyway), but more about creating pretty and interesting pictures, that others like to look at. Q10: What are you trying to express through astrophotography?

Besides the fascination of making something visible that is invisible to our naked eye, it is also a way to incorporate my technical skills in editing and my creativity in rendering and processing. This way I create a wonderful connection between what I do professionally anyway and my passion for astrophotography. I started with a DSLR and wanted to step up my game by investing in a cooled monochrome camera. I figured that my skies are so heavily light polluted that using a monochrome camera and narrowband filters was the only way to go to get the results I imagined. The ASI 1600MM Pro was THE camera that fitted into my desired sensor size and prize range. At that point there was no going back! 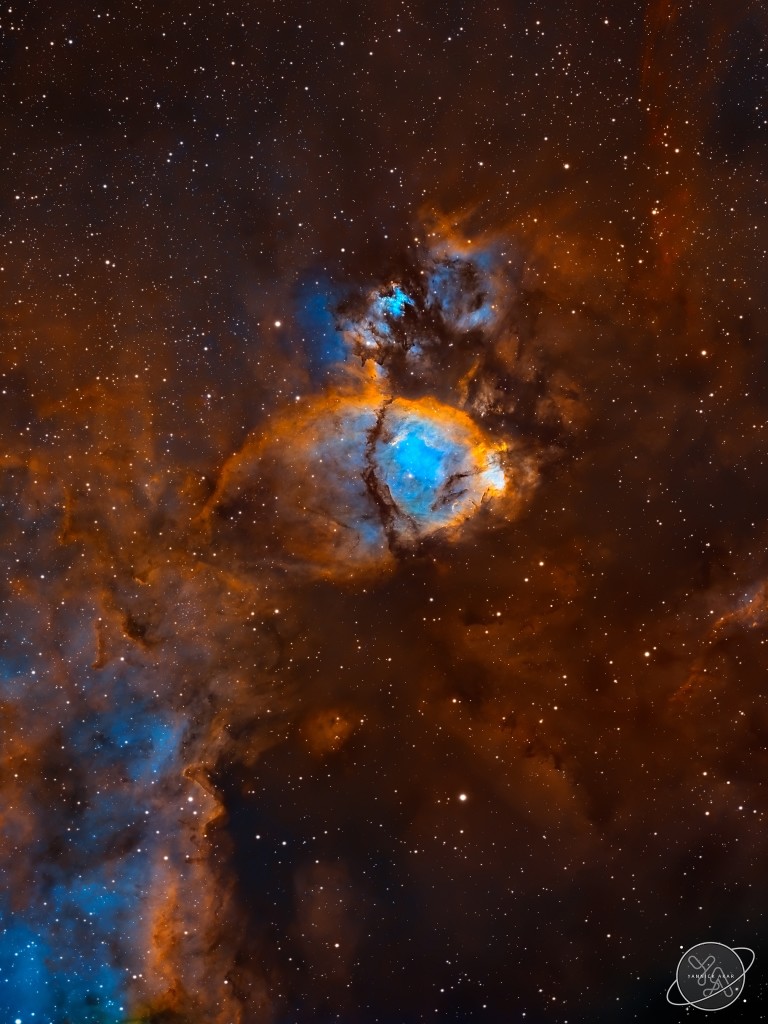 Q12: Which ASI module has a special place in your heart?

Definitely the ASI 1600MM Pro camera! It was my very first dedicated astronomy camera and got me where I am today. Q13: Do you have any feedback or suggestions for ZWO?

I’m really looking forward to the ASI2600MM Pro camera. The Sony sensor seems to have really nice advantages over the Panasonic, like the bigger sensor and a higher quantum efficiency. A super short back Focal Length version especially designed for users who are only able to work with a short back focus like the Celestron RASA 8” would be a dream of mine!

Q14: The year 2020 has just ended, what achievements have you made on astrophotography during this year?

This year I was able to photograph some really interesting and faint nebulae. I accomplished to add a second picture of my gallery as Image of the Day (Astrobin) on April 27th with my version of Soul Nebula (Sh2-199), as well as my second NASA APOD with the Flying Bat/Squid Nebula on October 7th. All rounded off by being selected as ASIWEEK winner of 01/2021. 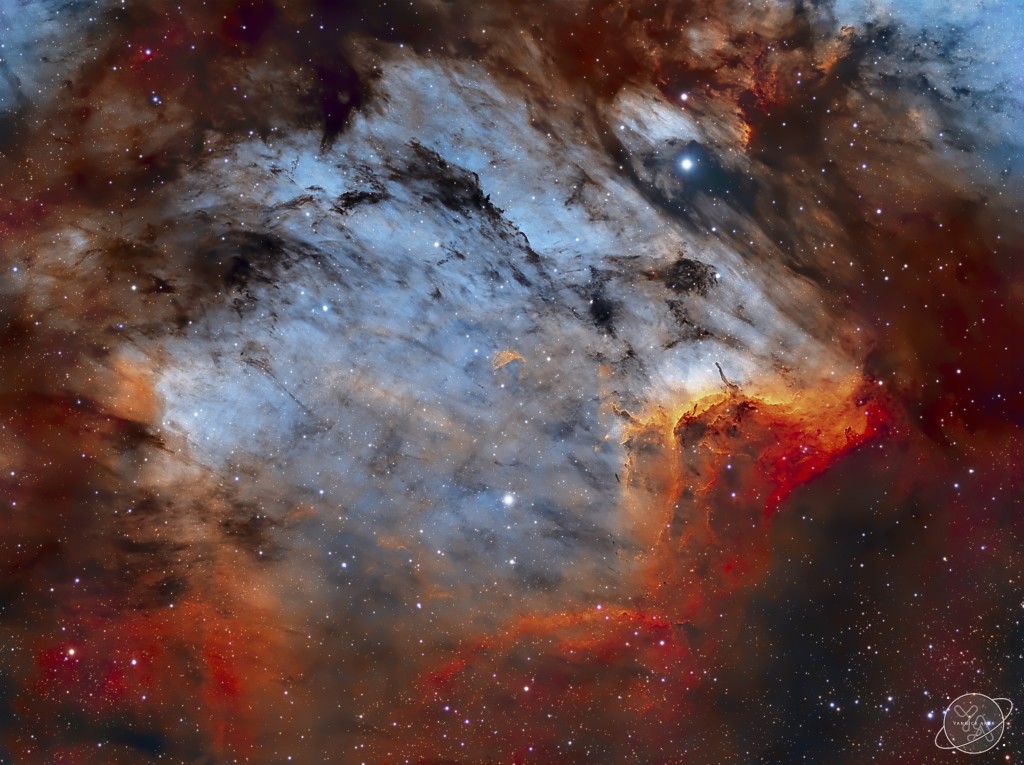 I finally want to image the Andromeda Galaxy with f/2 power and some more faint and rarely imaged nebulae, as well as upgrade my system with narrower Narrowband filters.