Yannick Dutertre is the winner of ZWO 2020 ASIWEEK #16 and has brought us many extraordinary astronomy photos. To make our ZWOers know this excellent astrophotographer better, we make this interview. Let’s all take a look now. 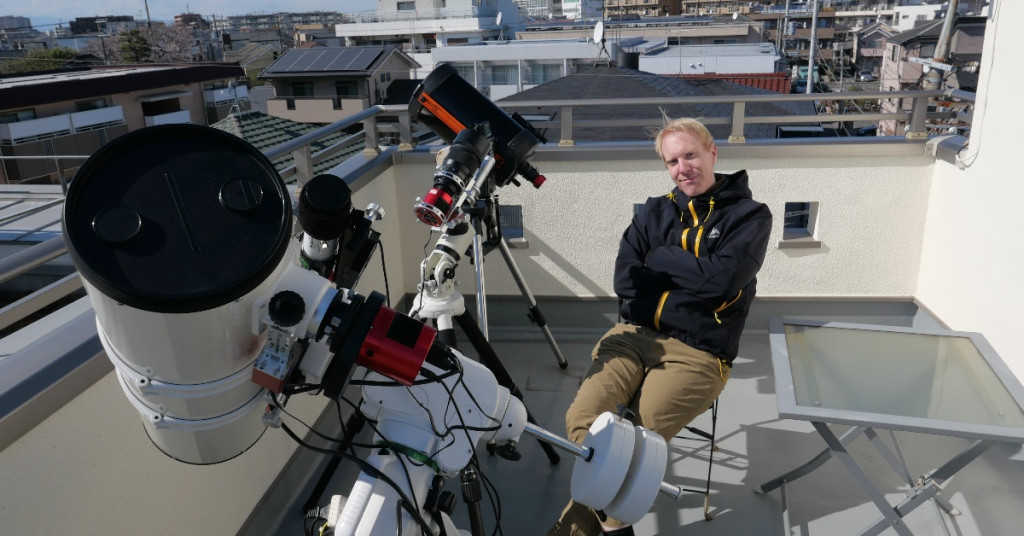 Q2: When did you start love astronomy and what had made you think of taking photos of the stars?

I started astronomy as a kid, when I got a 115mm aperture Newtonian scope and simple equatorial mount for Christmas. Unfortunately, I had no idea how important precise polar alignment was, so had no clue how to search for targets in the sky. Still, I was able to see Jupiter, Saturn, or M42 with my own eyes, which was amazing.

I started the hobby again as an adult with visual observing – but from Tokyo. As I couldn’t see much using my Meade ETX-125 or my Meade LT-6, I decided the see whether taking astrophotographs could help me see the “faint fuzzies” better. My first attempts were with a non-modified first gen Sony NEX 5 camera, and I quickly upgraded (?) to a Meade DSI II. This is one of my very first pictures using DSI II with LRGB filters and Meade LT-6 in Alt-Az. I had no idea how to combine LRGB frames, so a CloudyNights forum user actually did it for me (thanks Rigel123). 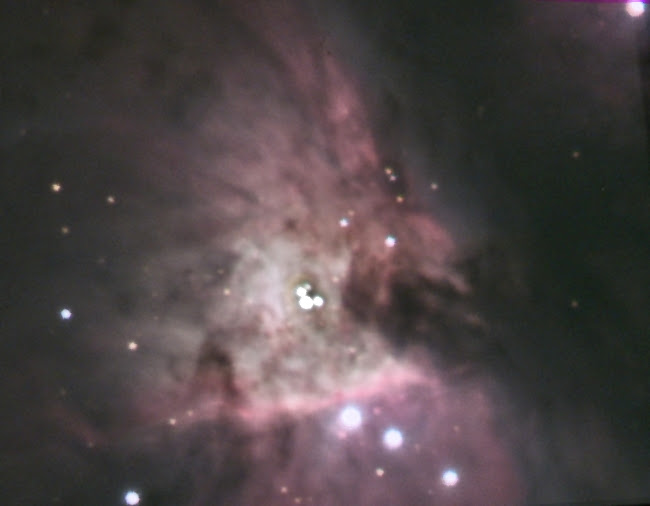 Q3: What equipment do you currently use? Can you show us some pictures of them?

I currently have three different setups, which are all very new, as I have recently sold a lot of my equipment to simplify what I own. Q4: We love your Leo Triplet very much! It must be not easy for you to achieve such impressive results considering you are in a Bortle 9 area. Would you like to tell us more about this project and how you made it?

Thank you! I usually do Narrowband Imaging, so I usually don’t even attempt to image during galaxy season. A few days ago, I was testing my new ASI533MC Pro, so I pointed my equipment to M51, not expecting anything. In the end, I had 500 frames of 30 seconds each, and when I stacked them, I got a much, much better result than I expected – galaxies can be more easily separated from the light polluted background than extended nebulae can be. This made me think that I could try for other galaxy targets directly from my Tokyo balcony, and chose the Leo Triplet, as it fit the field of view of my imaging rig perfectly. 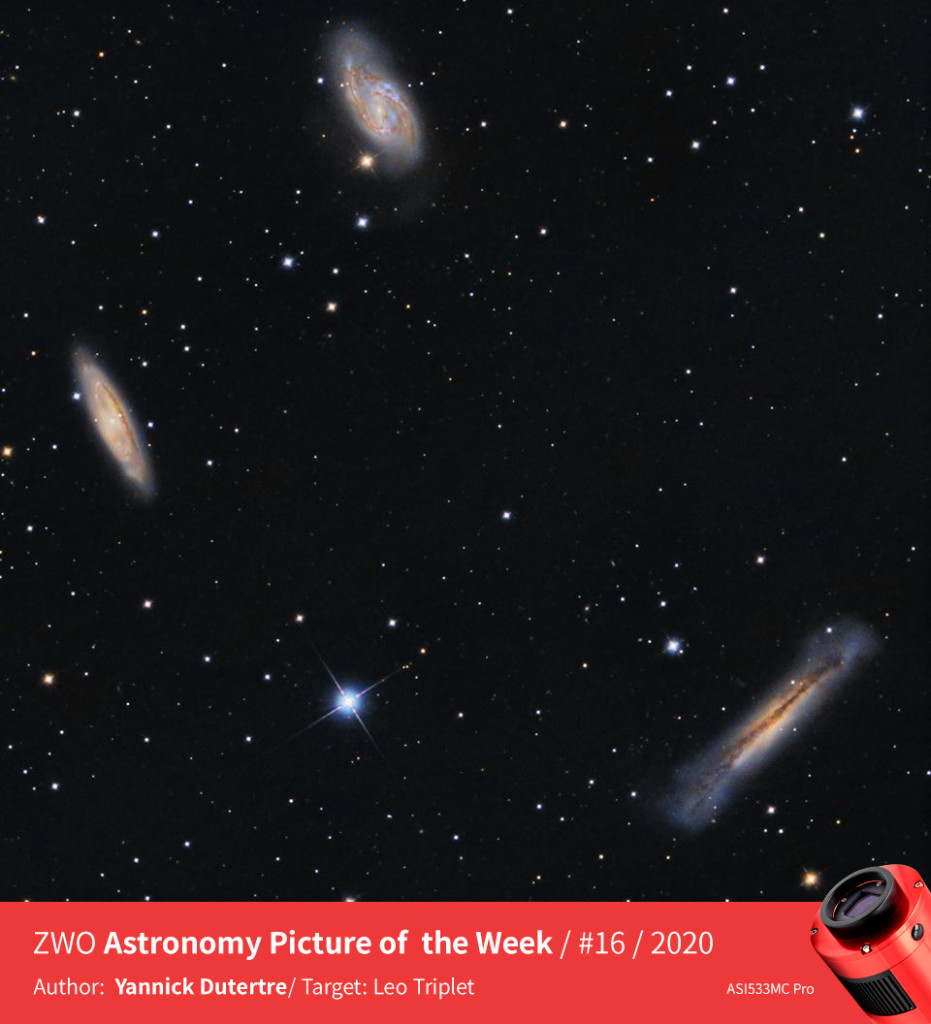 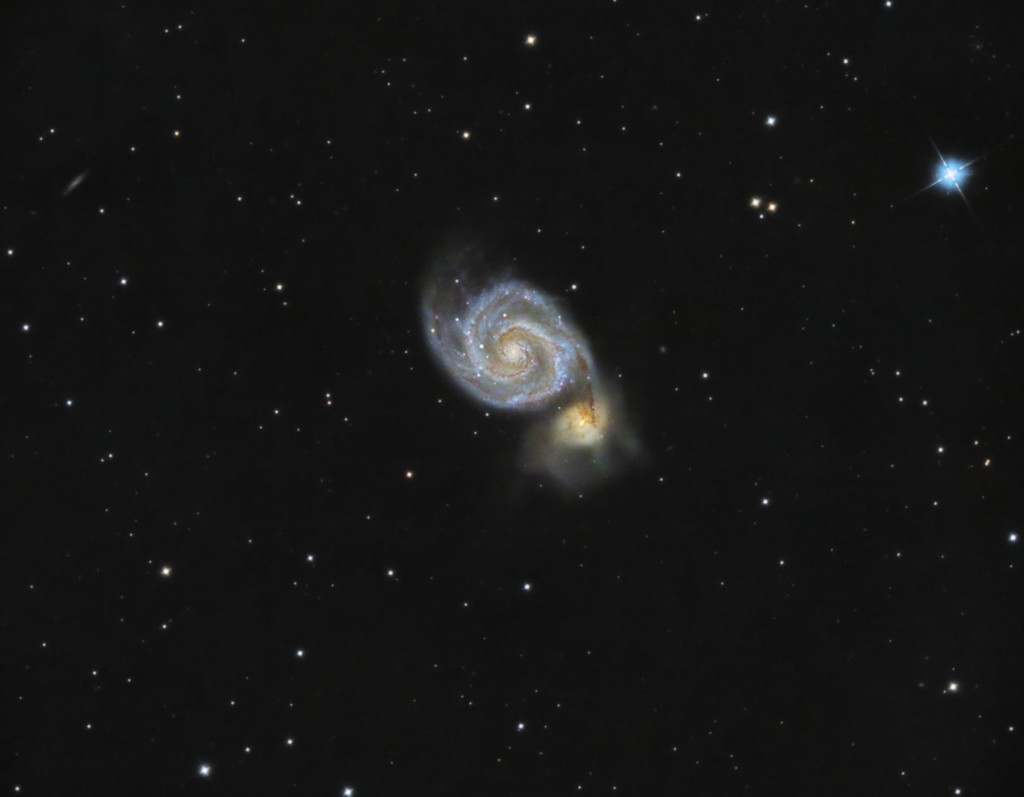 Q5: How many efforts have you made to overcome the heavy light pollution in Tokyo?

The easiest way to overcome the heavy light pollution here has been to invest in 3nm Narrowband filters from Astrodon. I have also played with narrowband filters for OSC (OPT Triad Ultra) but didn’t quite like the color palette I obtained. I should also say that Tokyo doesn’t have great weather (I don’t know why, but in summer there are many perfectly sunny days followed by cloudy nights), and has constantly poor seeing, so planetary imaging is also very hard. My roof balcony is also very prone to fairly strong winds, which makes long exposures difficult. Plus, I avoid imaging objects that are less than 30-40 degrees above the horizon: any lower than that and they are drowned in smog and light pollution.

While narrowband is great, with the many LEDs set up in Tokyo, even narrowband has started suffering more from light pollution, especially the OIII band – which typically has less signal but more LP filtering through, dramatically affecting the signal to noise ratio. I am also having a lot of trouble performing the combination of HA, SII, and OIII bands – it is more of an art than a science, and I am unfortunately terrible at art! Ideally I would simply drive to darker skies, which is possible from here (I can get to a Bortle 4-5 in one hour or so)… but each time I have done so, it has ended in failure (problem with battery, dew forming on the scope, sudden cloud cover, too strong winds, etc.). I need to try again but am always afraid that it will be for nothing. I have a huge amount of respect for people who regularly drive to dark sites.

The below Orion picture is from a Bortle 4 zone West of Tokyo, was taken through thin clouds, and was just 44 x 30s exposures with a Samyang 135mm f2.0 and ASI294MC Pro on an AZ-GTi mount (this was right before a park ranger came to tell me the parking lot I was on was closing). I was amazed at what I was able to achieve in just a few minutes of exposure, it almost felt like cheating. 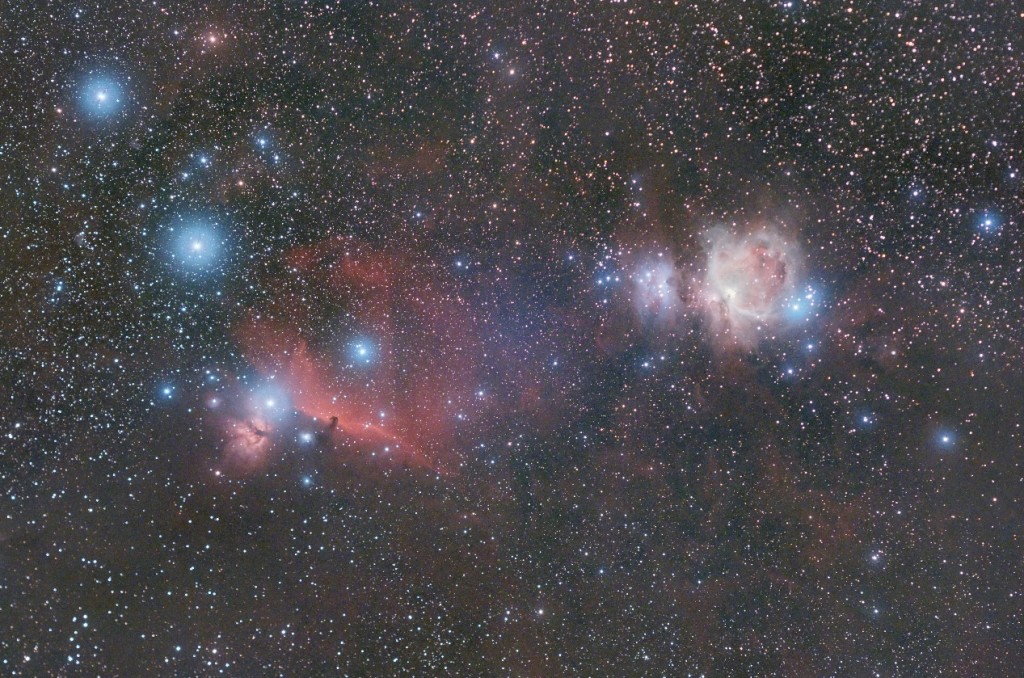 Q6: Among all the stars, galaxies and nebulas, do you have a favorite target? Any pictures?

The target that I love most is probably the Horse Nebula, but somehow, I never had quite the time to take a good picture of it! I currently only have HA data on it. I will try again next year. Another target I find fascinating is the Veil Nebula / Cygnus Loop. It is a huge object, and I find it amazing that such a large object (in terms of apparent size) could come from a single supernova. I intend to take a mosaic of that object if I can – I have already determined that it can be shot from Tokyo in narrowband. 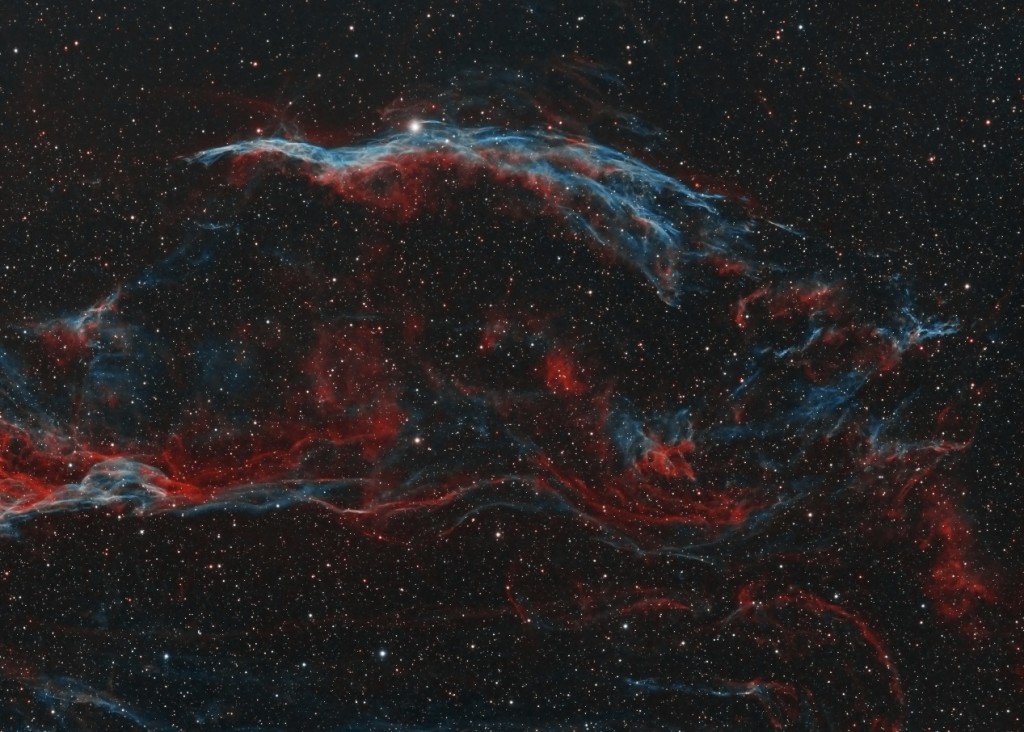 Q7: What do you think is the most difficult part of post-processing? How do you achieve the balance between authenticity and aesthetics?

For me, it is the noise reduction, and the combination of multiple narrowband channels. Noise reduction is extremely hard to do, when you have a poor SNR, which is often the case of my stacks, even when they are many hours long. There is an upside to poor SNR however: my data is usually not good enough to support sharpening and other operations that could affect authenticity. I am also very lazy, and never take the time to do the more complex operations like Deconvolution, which helps me stay authentic.

Where I suffer the most is narrowband combination. To this day I have no idea what I am doing when combining narrowband channels. I do not know whether the hue curve manipulations I do are scientifically accurate or if they alter anything. I have never been fully satisfied with any narrowband picture I have taken. In the below picture, the blue of the tadpoles nebula is too turquoise, and not transparent enough. I have never figured out how people manage that blue and gold Hubble palette look. Q8: How many ASI products do you have? How did that come to you to buy your first ASI camera?

I used to have too many before I sold a lot of my equipment. Currently I have four ASI cameras and the EAF.

I was using a monochrome DSLR (modded Canon EOS 650 with Bayer matrix scraped off) when I started looking at cooled cameras. Just then, the ASI1600MM-C was released, and I think I got one of the first! Back then they came with an ST-4 port instead of a USB hub. At the time I didn’t know that it was CMOS vs CCD, I just knew that it was cheap, had cooling, and seemed like it could work. A year ago, its main board stopped working, so ZWO changed it for a V2 board which has the very convenient USB hub on it! I really love this little camera; it has completely changed my astrophotos. Q9: Do you like your new camera ASI533MC Pro? Does it work fine with your telescope?

I really like it! I used to have the 294MC Pro and the 071MC Pro, but the 294 was a bit too hard to use in a white zone and had issues with my OPT Triad Ultra filter, while I found the 071MC Pro to be very clean and easy to use, but less sensitive than I wanted it to be. The ASI533MC Pro is the perfect compromise for me. It has a very clean signal with consistent and easy to calibrate noise, while remaining extremely sensitive. It works great with my telescope and gave me just the right FOV for that Leo Triplet picture. 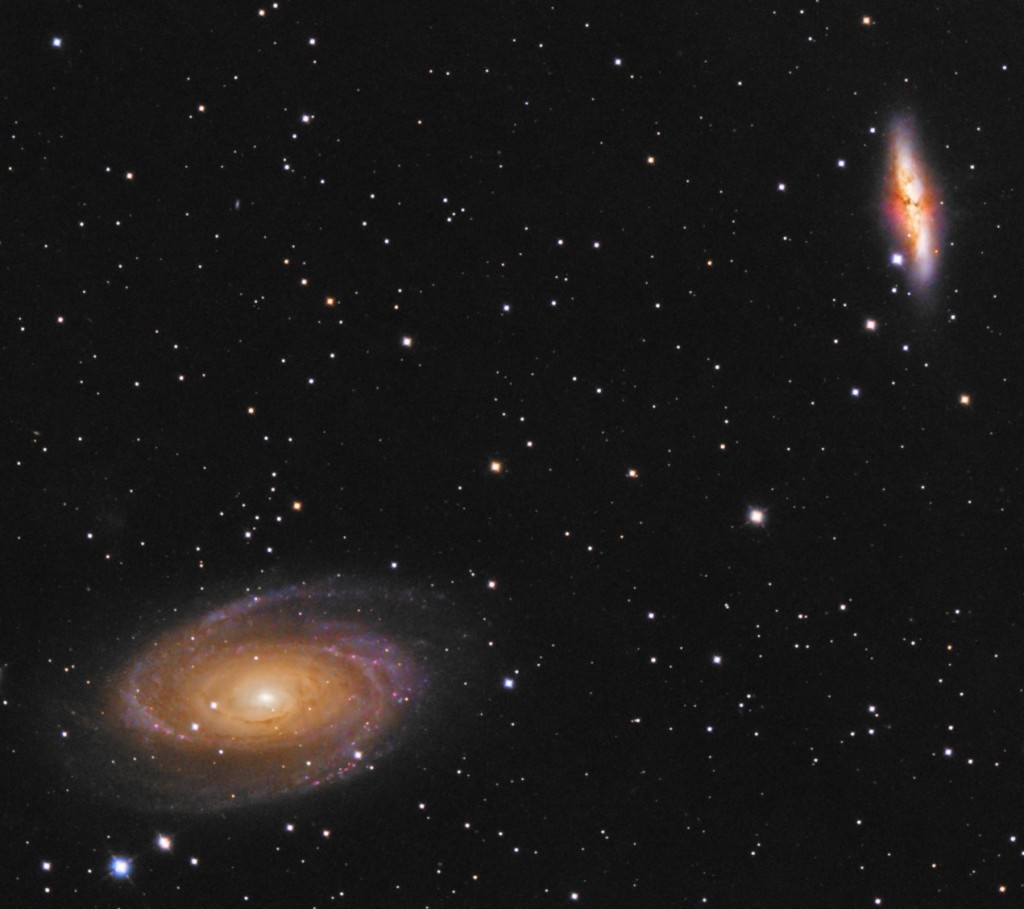 Q10: Do you know our ASIAIR PRO? Any new features of it you feel interested to add?

I know of the ASIAIR PRO – I’ve been following the ASIAIR since its release. I like that the ASIAIR Pro has fixed one of the shortcomings of the ASIAIR: lack of USB 3 ports. I really, really want one to use when going to darker skies. But it is missing one critical feature for me: the ability to perform autofocus.

With my Newtonian, focus shift throughout the night can be significant, and not being able to autofocus frequently is a showstopper. I am an occasional code contributor to the open-source capture software N.I.N.A. (https://nighttime-imaging.eu/), and because of that I have been able to help increase compatibility with the various ZWO products I own: I added direct dithering (without needing a guide camera) for wide field imaging, greatly enhanced OSC camera support in N.I.N.A. since I bought the 294MC Pro, and added various autofocus related features (Better star detection routines, Autofocus after HFR change, autofocus parabolic and hyperbolic curve fitting, contrast based autofocus, etc.). The freedom to be able to add features I need to the capture software I use has been very useful to me, and I’d be afraid to lose that freedom with ASIAIR. However, I’d really want to give it a go once autofocus is available. Q11: What’s your impression of ZWO? Do you have any feedback and suggestions that want to speak to us?

ZWO is a great, innovative, and always improving company. I like all the experimentation that goes on, and how products get refined across versions (camera rings getting enhanced, OAG getting more stable, EOS adapter getting more solid, etc.). If anything, I’d suggest a partnership with Astromechanics to ship ZWO-branded EOS adapters with ASCOM control of aperture and focus motor of the lens and adding autofocus to the ASIAIR! Also, how about making ASIAIR software open source?