Home
Astro Bio's
From Earth to the Stars: Nigel’s Story 🙏

From Earth to the Stars: Nigel’s Story 🙏

Q1: We are deeply sorry to hear the bad news of your father. Through our contact with Mr. Latham, our team members recognized him as a very good and understanding person. Such a pity that we did not have more opportunities to get to know him better! If you don’t mind, could you please make an introduction of him to us?

Nigel Latham was born in 1954 and lived all of his life in the Midlands, UK. In his younger years, he worked as a disco DJ, making a lot of his equipment himself due to also being interested in electronics. After this, he began to work as an electrical engineer, mainly working on car stereos. Eventually, he moved into an IT role providing support for bespoke software. His last position before retiring due to progressing health issues was working as an IT Technician at a local school.

His main hobby for most of his life was photography. He tried all types such as models, scenery and still life.

The last 10 years were tough for Nigel. His health problems worsened and made it difficult for him to do the things he loved. He passed away peacefully in March and awaits in the stars. He is deeply missed by his wife, Lesley and his two sons, Richard and Stephen. 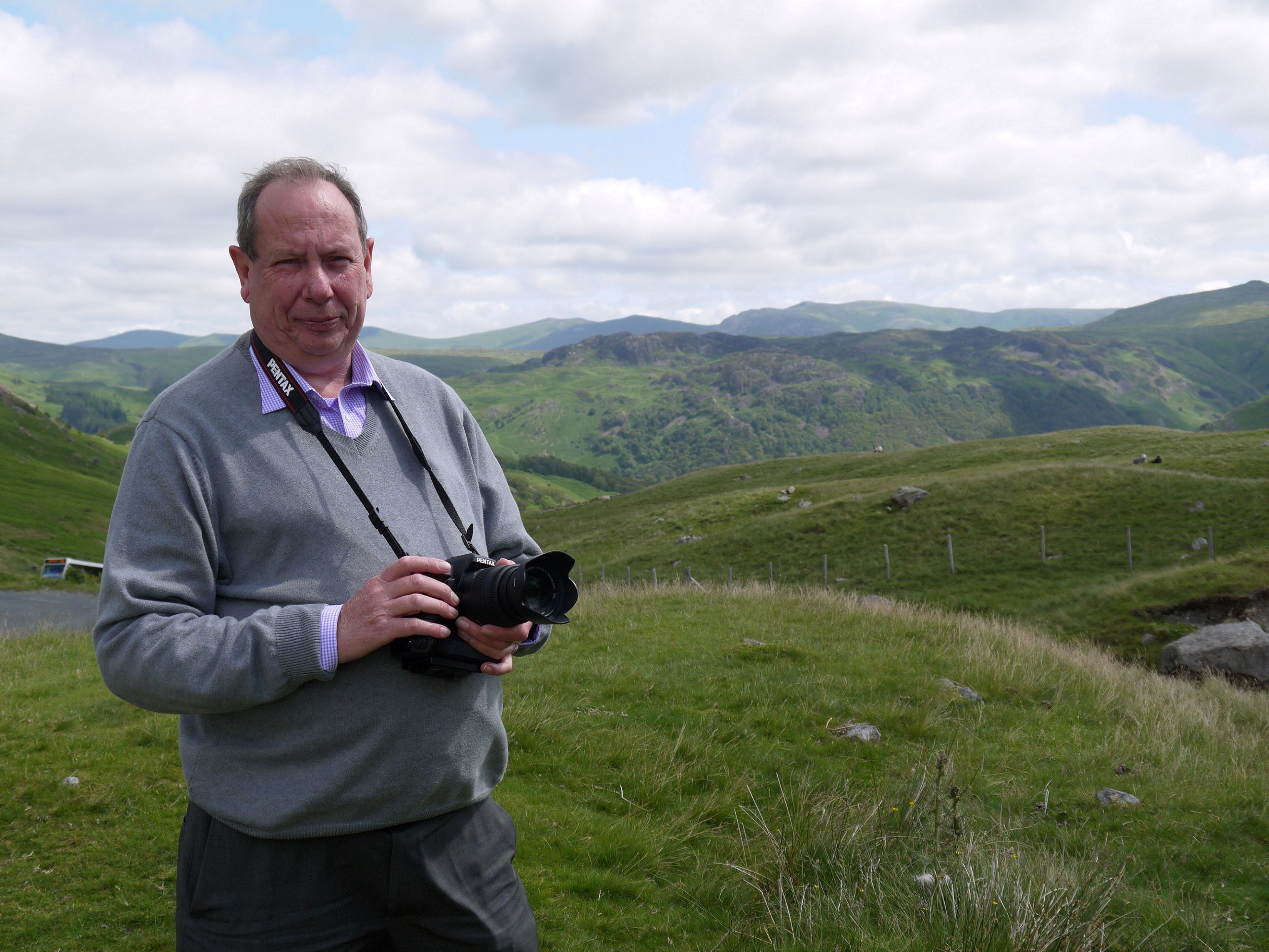 Due to his declining health and mobility, no longer capable of getting out and about to take scenic photography, he looked for a way to continue and evolve his hobby into something new. At first, this came in the form of still life photography. This took him many hours of preparation for every photograph, which in a way prepared him for the patience required in astrophotography.

I am not sure what sparked the idea of pointing the camera at the stars, but I am very glad it happened. Q3: Have you ever joined your father’s astrophotography nights? In your view, did your father enjoy those nights?

Absolutely. I would sometimes just sit and watch him, listening as he told me about the various objects he was attempting to image. I could tell from the way he was explaining what he was doing, he was extremely passionate about astrophotography and I believe he definitely enjoyed having the company. 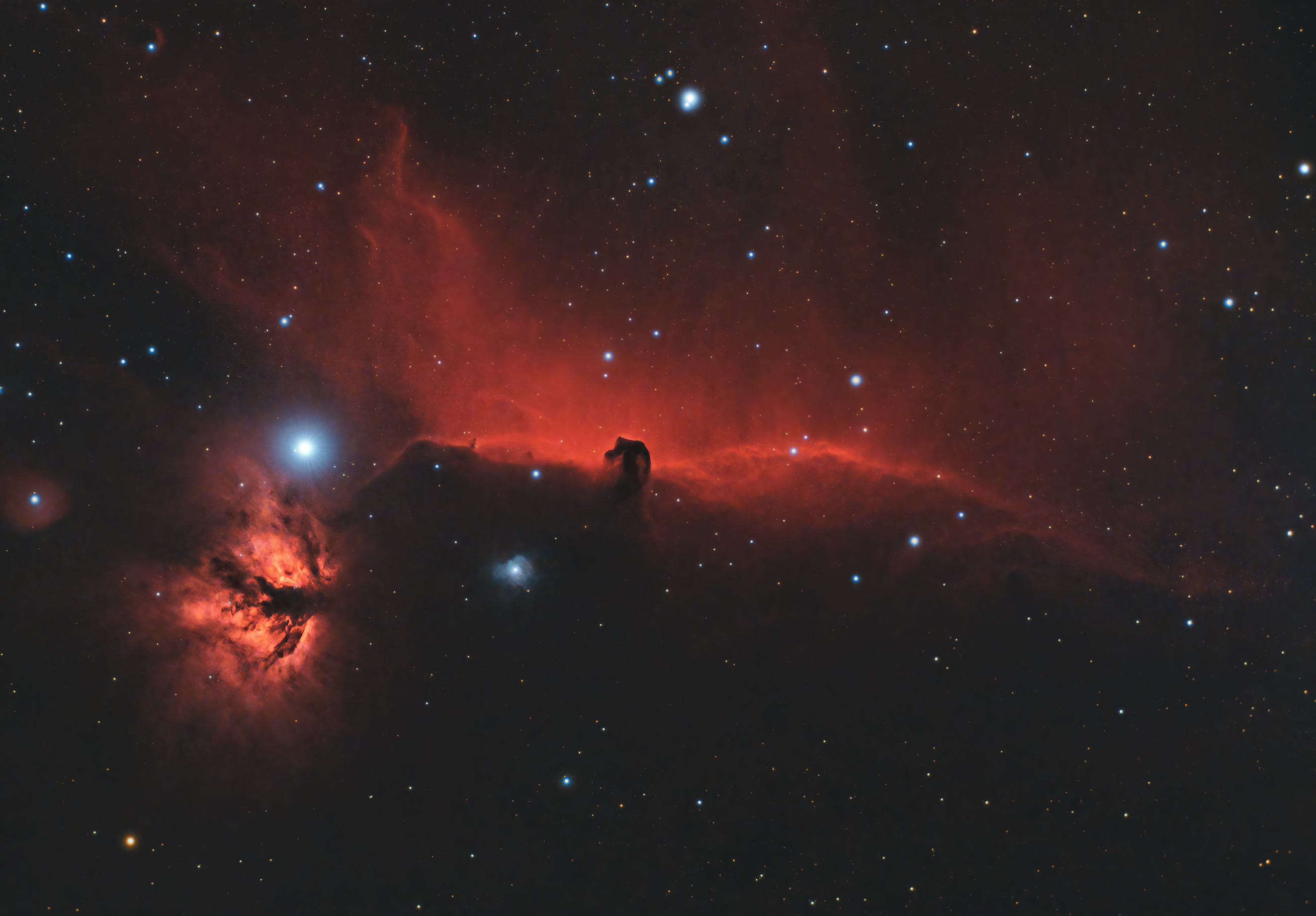 Q4: When he got in trouble during those imaging nights, how did he deal with it? (The weather may be a problem for astrophotographers because astrophotography usually requires clear skies.)

Being in the UK, as you can imagine at many times of the year clear nights were few and far between. While I am sure he felt frustrated at times, he used that time wisely to improve and optimize his workflow and setup. For example, making custom length cables to make sure everything was neat and tidy. He also spent a lot of time making preparations and learning new techniques so when a clear night came along, it would not go to waste. Q5: Do you think your father had changed since he started astrophotography?

I believe astrophotography set him free. He was a person of routine. Always in bed for 10 pm. After he started the hobby, he would be up until 2, 3 or even 4 in the morning. It was a more adventurous side I had never seen before. 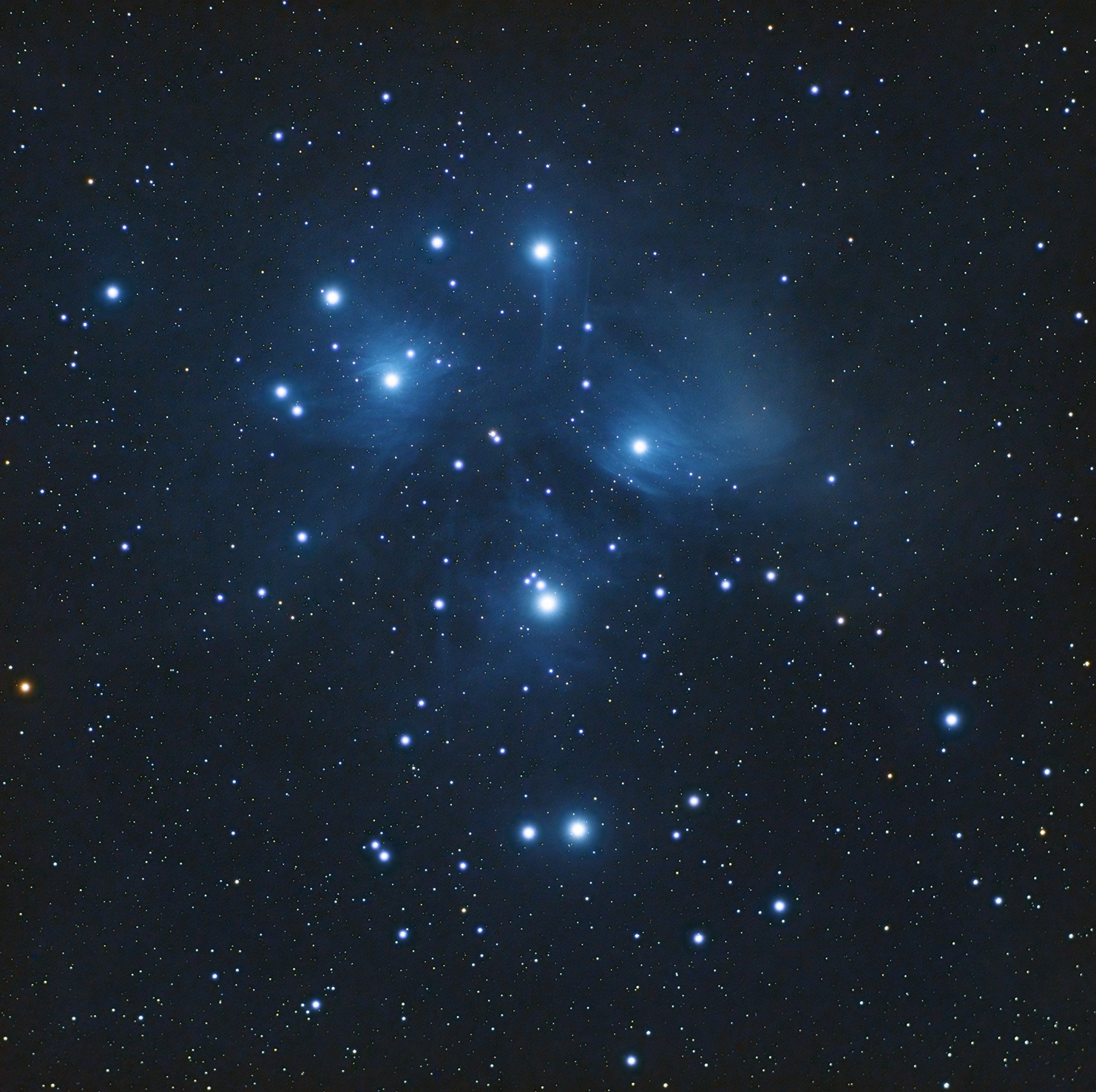 Q6: Can you share with us some photos of your father’s setup and astrophotos? 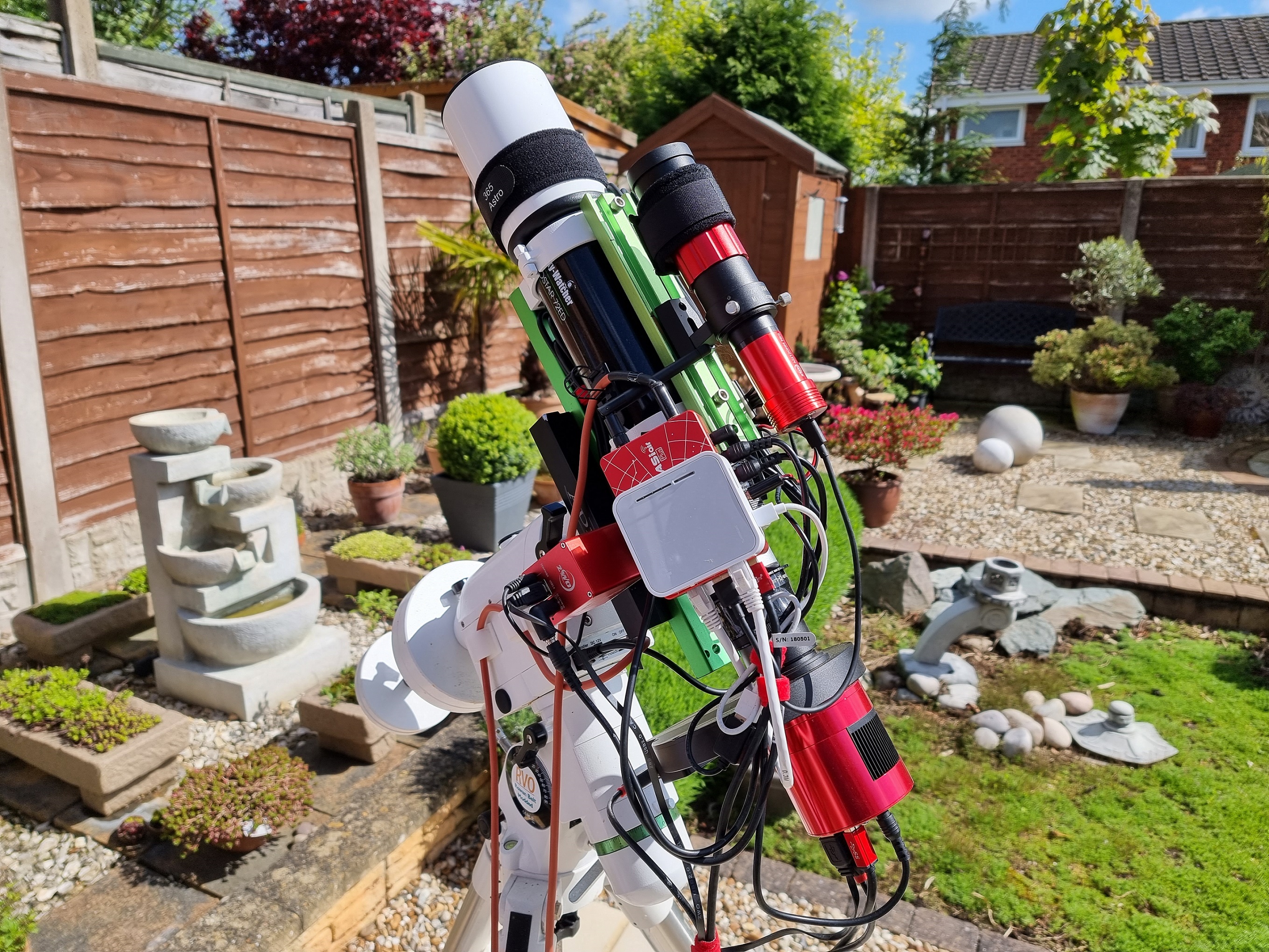 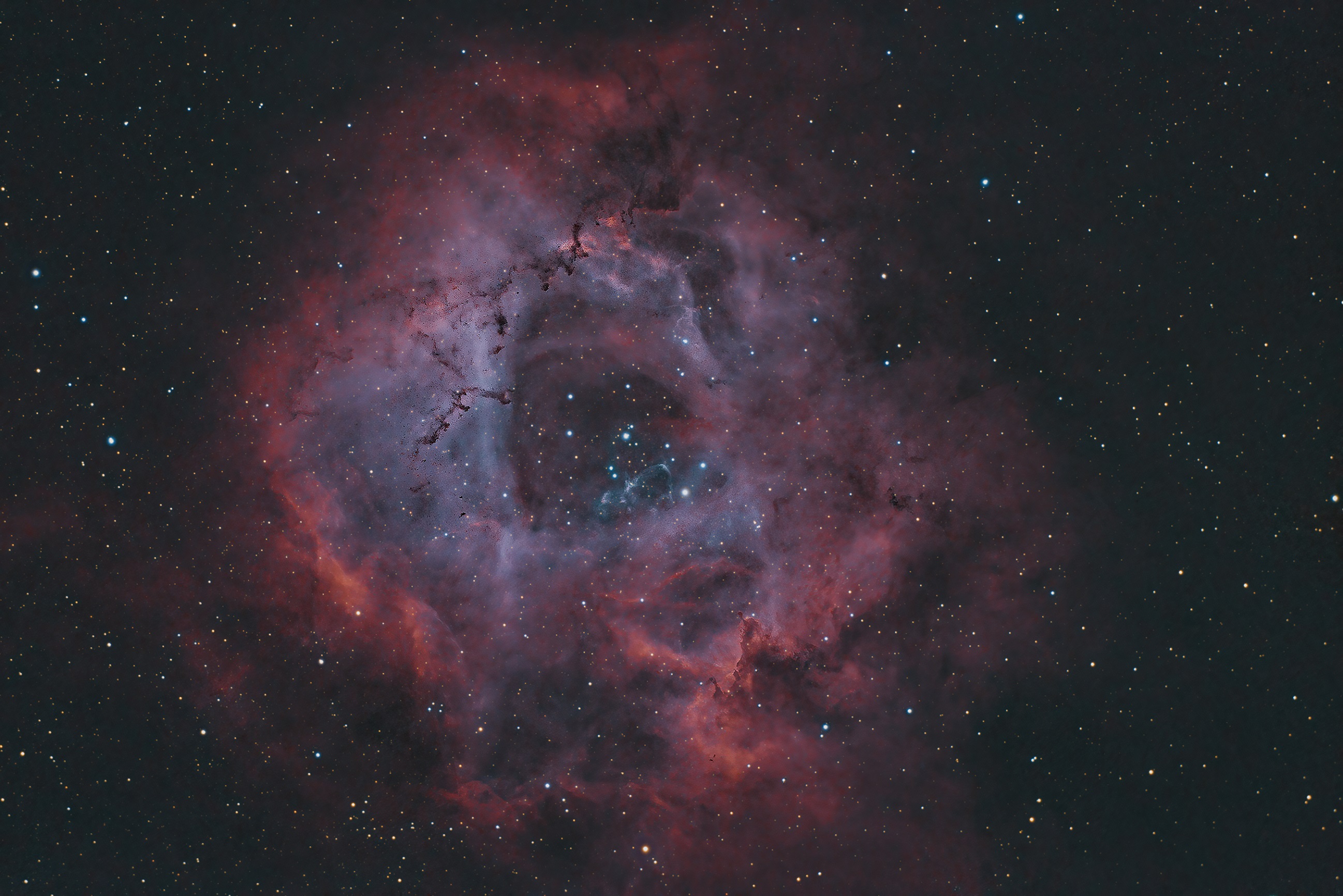 Q7: Is there a photo of your father’s favourite work? Do you know how this photo was taken?

I am not sure of his personal favourite, but the one I would pick would be the Eagle Nebula, home to the Pillars of Creation. It’s such an iconic object and it makes it even better knowing that he imaged it himself. I am not sure on what equipment he used for this. 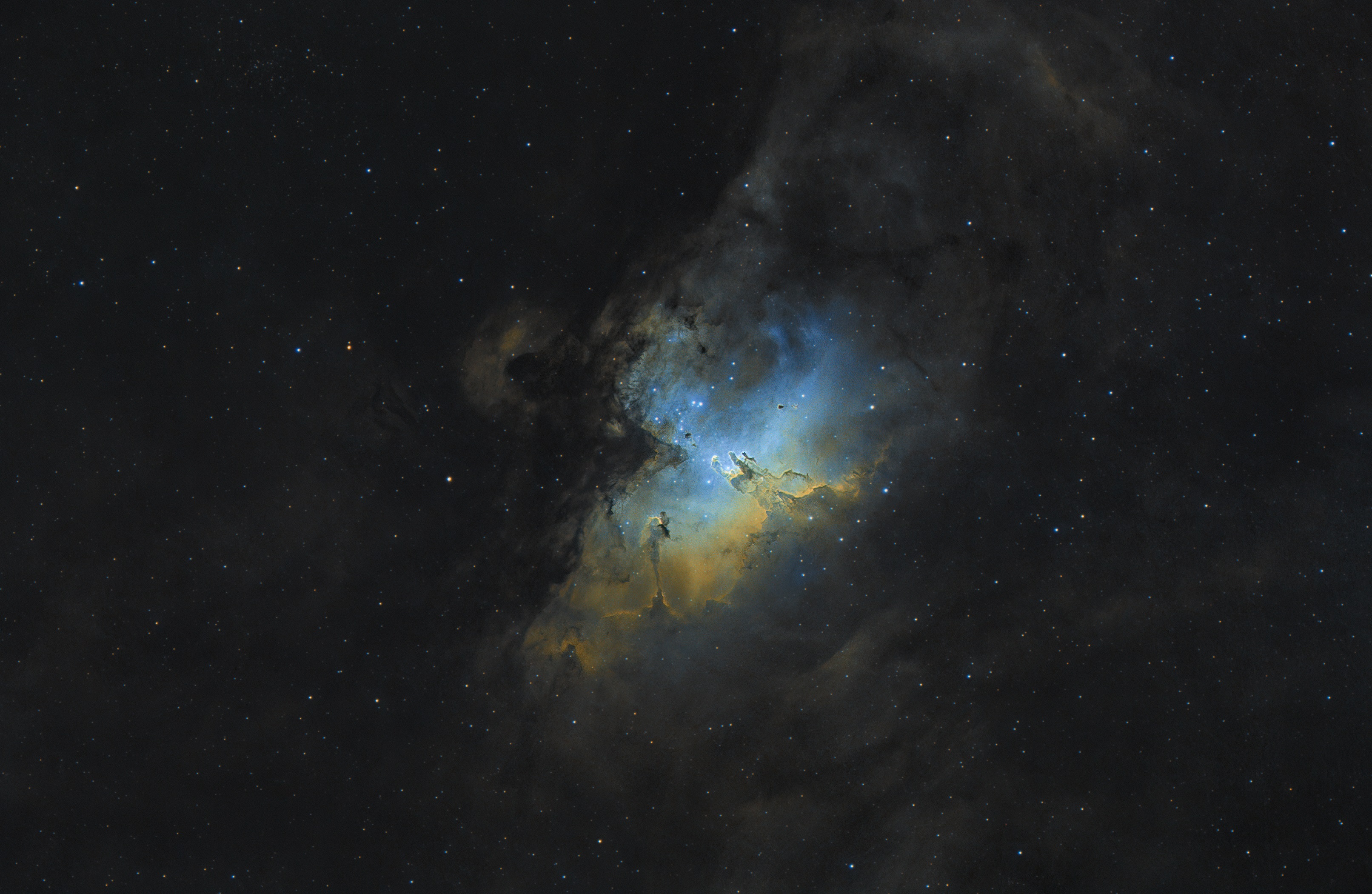 Q8: If there’s any, could you please show us one of your father’s early works when he first stepped into astrophotography in around 2018 so that we can see the evolution?

Earliest finished work I can find is the Orion Nebula from November 2018.

The most recent one he completed before he passed was coincidentally the Orion Nebula once again in February 2022.

The difference speaks for itself on how much he improved over a few years. 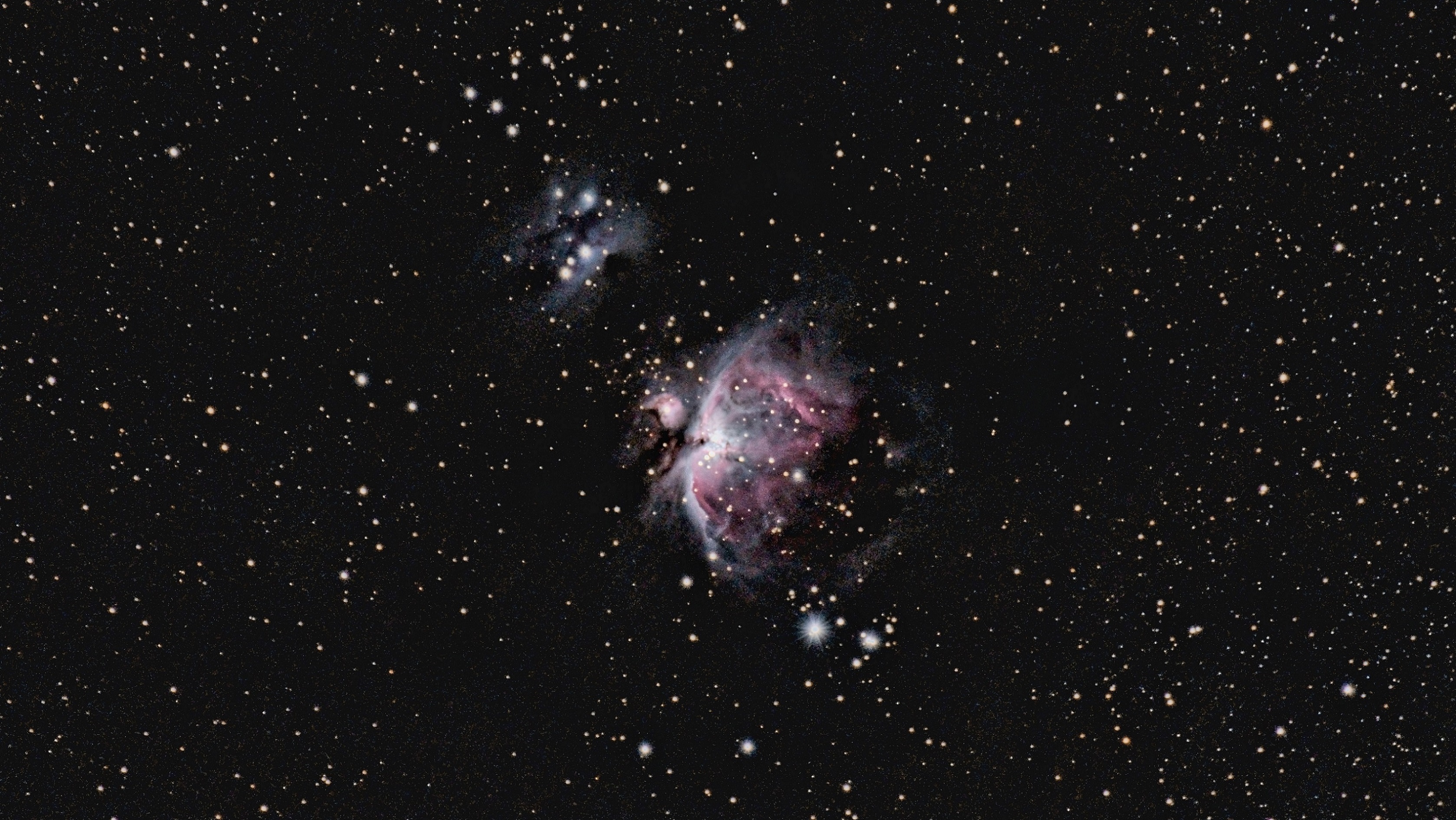 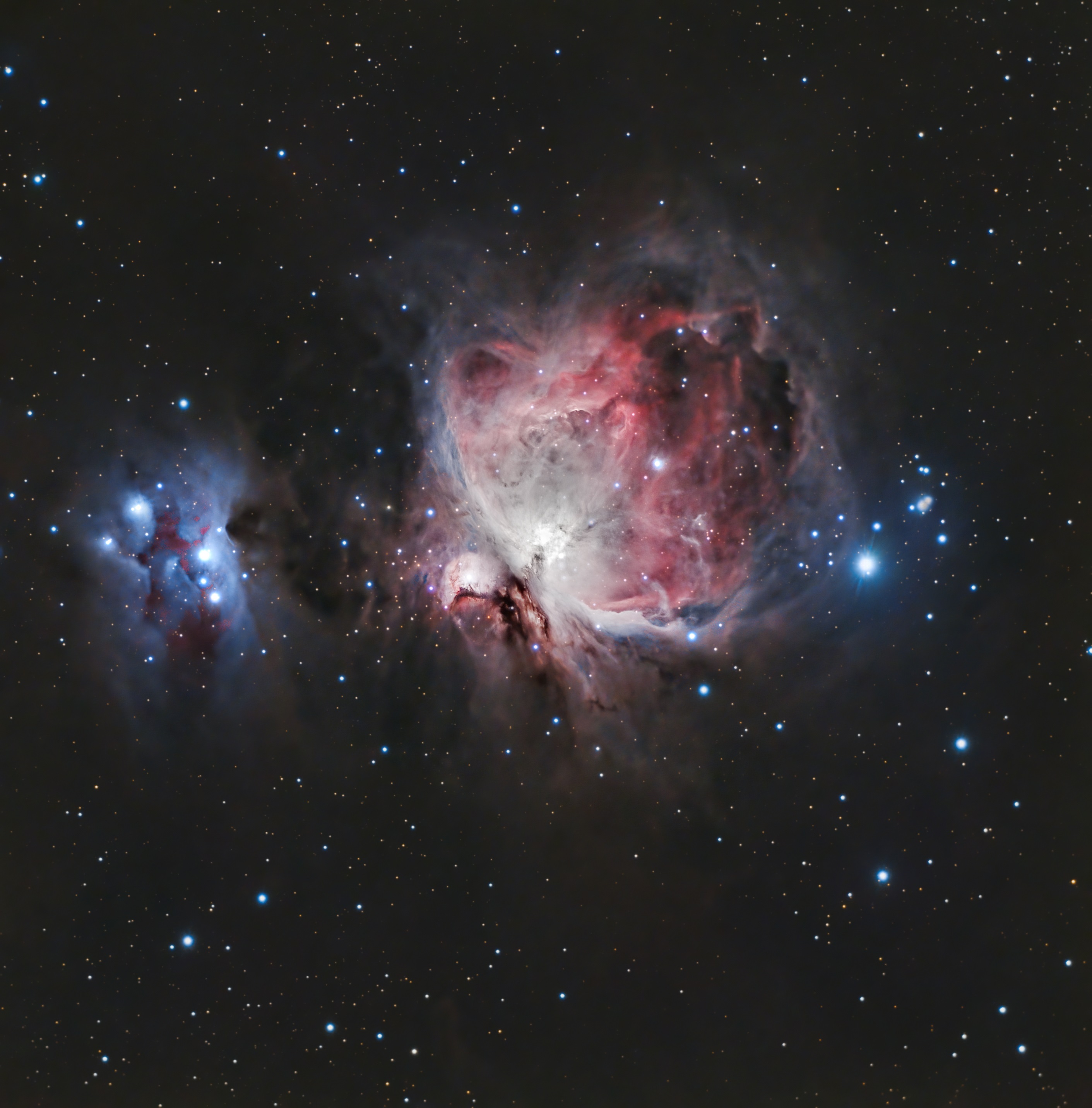 He did and was very proud to do so. The vast majority of interactions with other astrophotographers were through various online groups and we were not aware of any local groups at the time.

Q10: Nigel was a member of ZWO’s ASIAIR test team and helped us a lot. Did he ever mention this to you? (We are very grateful for his dedication!)

It was the main thing we spoke about. Whenever I asked him what he was working on, it was usually testing a new feature or reporting bugs. He was extremely excited whenever a new firmware version was released, especially if it fixed an issue that he had reported. When he found out his name would be printed on the booklet for the ASIAR Plus, we were both extremely proud of the work he had done. 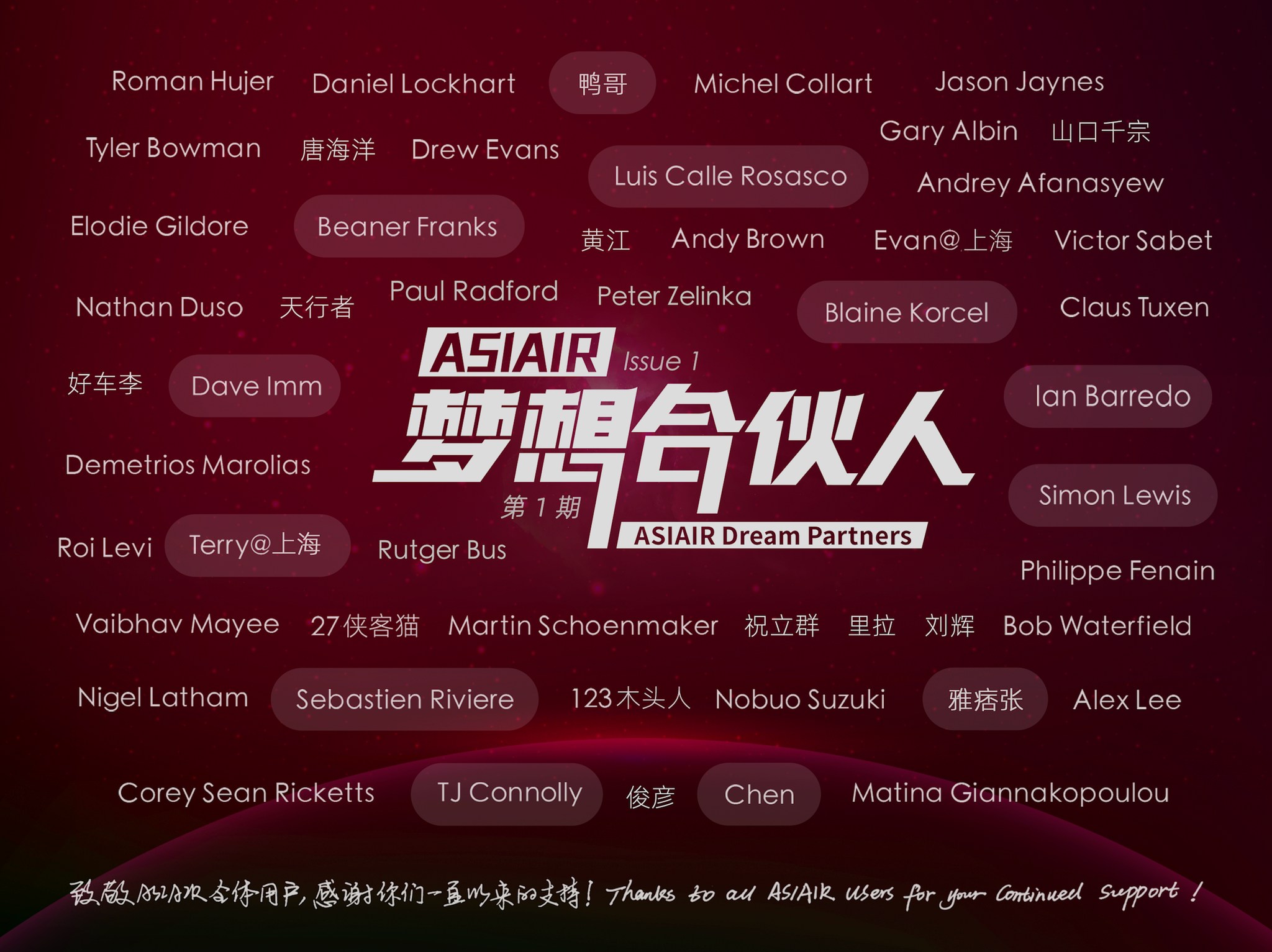 Q11: As one of the dream partners, Nigel had always been active, enthusiastic and friendly in helping others and answering their questions, whether in the ASIAIR test group or in the user group. He must also have been this friendly in his normal life, wasn’t he?

He was the friendliest and laid-back person you could ever meet. He was so enthusiastic about his hobbies and was a pleasure to be around. 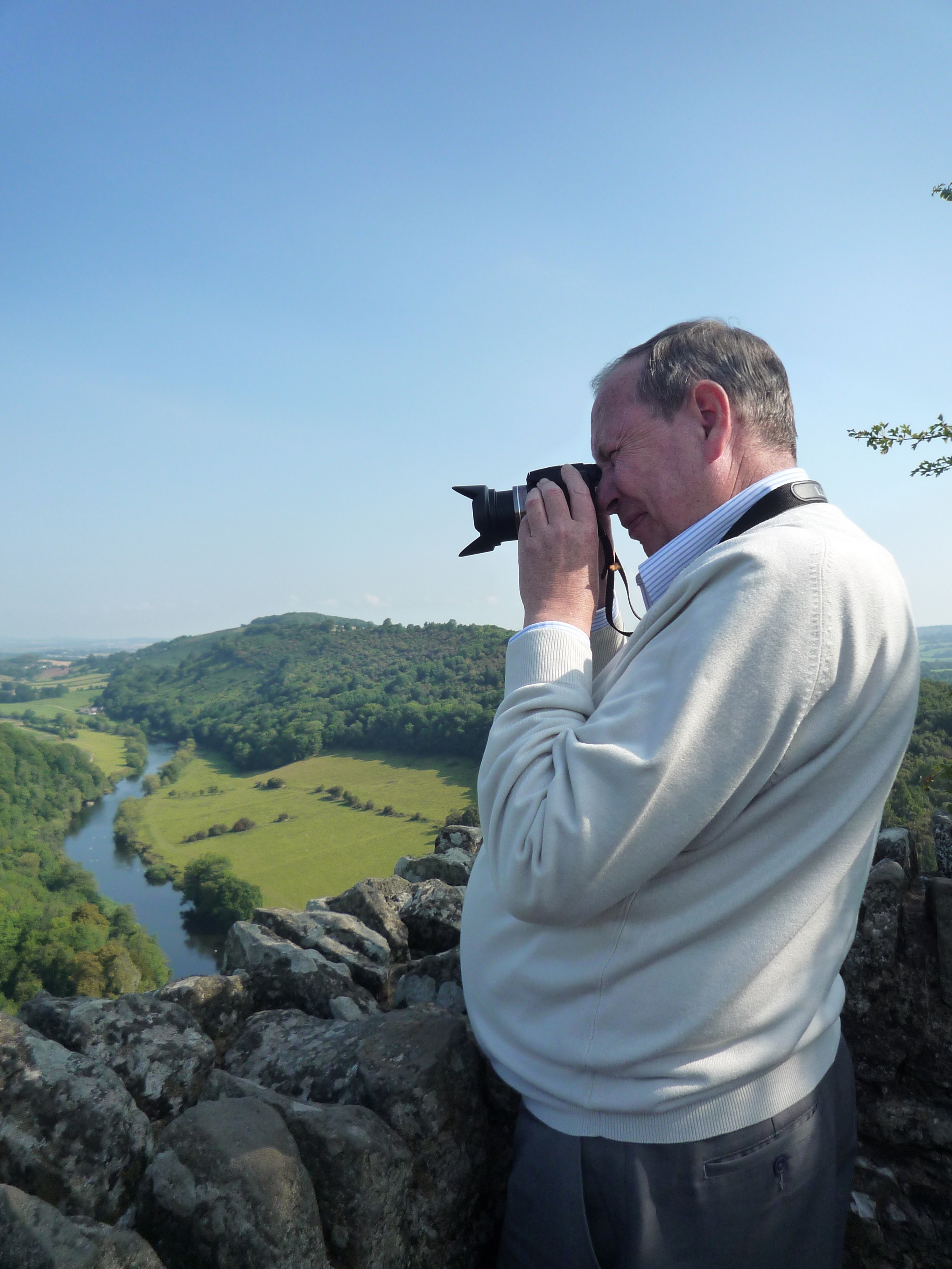 Q12: Did your father have any other hobbies besides astrophotography?

Apart from his regular photography, he enjoyed listening to music immensely. He would listen every night and in his spare time, he would add to and organize his large music collection accumulated over many years.

Q13: Usually, we give astrophotographer’s stories titles by ourselves, but this time we want you to name this article. What title do you think your father might want us to have?

“From Earth to the Stars: Nigel’s Story”