Third conversation with Martin Lewis — This time this man got a superb Venus nightside image!

The reason why we decided to have a third interview with Martin Lewis is that we saw his great new work – Venus nightside at 1000nm. It’s very amazing and we are curious about how he could capture this so successfully. Gladly that Martin quickly accepted the interview invitation and frankly told us his experience in shooting the nightside of Venus in the interview.

Q1: Hello Martin, it’s our great honor to have this third chance to interview you! We’re very excited to see your Venus nightside image – it’s a huge success! Congratulations! First could you please make a brief introduction on this image? What equipment do you use? 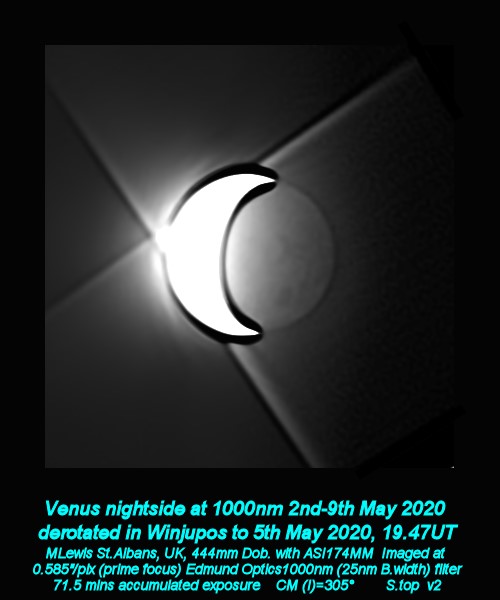 Thanks – really glad you liked the unusual image of Venus, which shows the highly overexposed illuminated day-side of Venus on the left and the unilluminated night-side on the right. On the night-side you see the actual surface of the planet with the darker regions being cooler, higher areas.

The image was the result of processing video data gathered over four evenings using a ZWO ASI174MM camera attached to my 444mm Dobsonian telescope. In front of the camera I had a special Edmund Optics infrared filter, centred on a wavelength of 1000nm and having a bandwidth of 25nm.

Q2: It’s not very common for us to see a night-side image of Venus, can you tell what’s the difference between it and your other Venus images?

Venus has a very hot surface covered in a very thick layer of dense cloud. When imaging in more usual wavelengths of infrared light, visible light or UV light you see this cloud layer reflecting sunlight on the illuminated side, but you see nothing of the unilluminated side. If instead you image the planet through a narrow band-pass 1000nm filter the atmosphere of Venus becomes nearly transparent. In these circumstances on the night side, where there is no sunlight to swamp the view, you can, under particular conditions, detect the faint infrared glow of the planet’s 470°C surface. You can also see temperature variations which correlate with surface height variations.

Q3: What details does the image reveal at 1000nm IR filters?

The image shows several darker features that match known higher areas of Venus’ surface. These higher areas are cooler and hence emit less infra-red light. You can see the match between these darker areas from my image and the known higher features in the map below. Here I have unwrapped the globe in the first picture to make a rectangular map using the program Winjupos. This has then been matched in longitude with a map made from radar altimetry data collected by the Magellan space probe, whilst it was in orbit around Venus in 1989 to 1994; 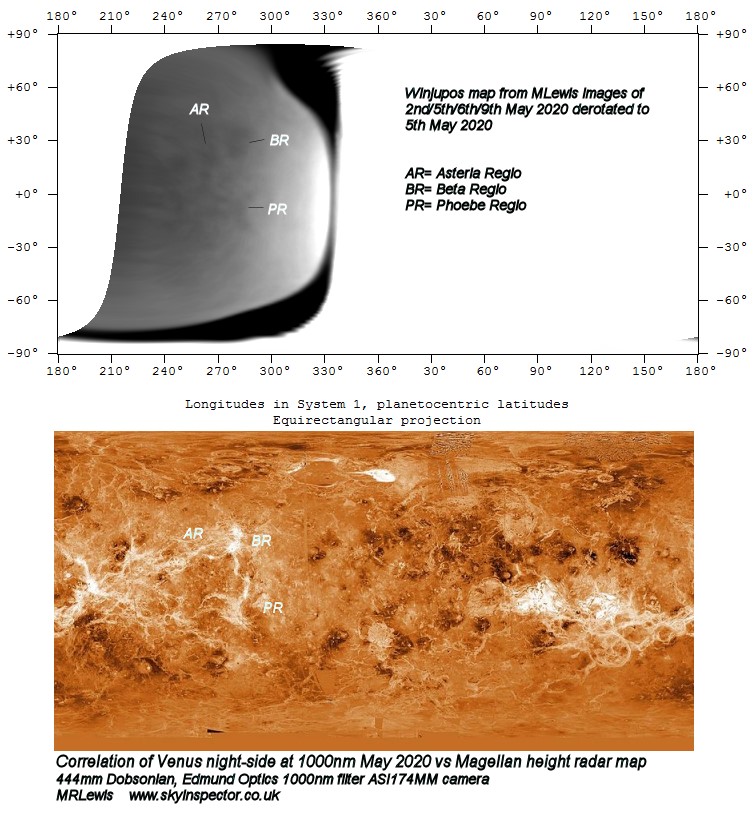 Q4: This image took advantage of 4-days date with an accumulated exposure of 71.5mins. May I ask the air condition during this period? How many percent of frames was used for stacking?

The night-side of Venus is best seen during favourable oppositions when the planet is high up in a relatively dark sky, with the phase is around half or a bit less. Before that the day-side is too large compared to the night-side. Later on, when the phase much smaller, and a larger portion of the night-side is on show the planet is unfortunately nearer the Sun and it is in too bright a sky when it is at a decent altitude, causing other issues. The recent apparition of Venus was excellent for those in the Northern hemisphere and I was very fortunate that during the whole of the optimum imaging period the UK was blessed with very good weather – with many clear evenings. As a result I was able to record the planet on 10 separate evenings. The seeing was the steadiest on the 5th May and that was fortunate as that was when the phase was about optimum.

Imaging the night-side of Venus is all about long accumulated exposures and maximising the number of photons per pixel, as the target is so faint. In shorter exposures it is swamped with noise and the signal to noise ratio (SNR) is poor. I was able to combine my data from the 5th May with that from 2nd, 6th and 9th May, again Winjupos – derotating each day to match one common time. Combining the data like this significantly improves the SNR allowing the real detail to show through. My accumulated exposure time over the 4 days was 71.5mins and I used about 90% of the frames gathered. Being so faint it is better to keep almost all the frames to reduce noise – there is not the luxury of sorting through and then picking only the very sharpest frames.

You can see how noisy a single 200msec frame is in the gain and gamma boosted image below. You just faintly see the night-side glowing. 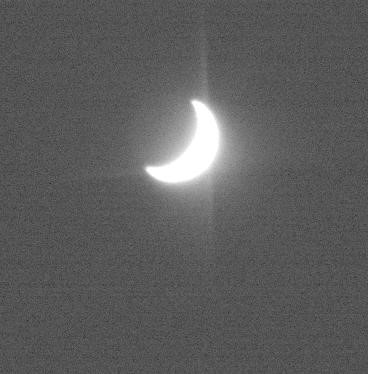 Q5: The telescope you used for this image, the 444mm Dobsonian, what’s the biggest advantage of it? How did it help the whole project?

Imaging the thermal glow from the night-side of Venus at 1000nm is particularly difficult due to the low surface brightness – this gets swamped by the glare from the much, much brighter illuminated day-side and also from the bright twilight sky. Cameras are very inefficient at these long wavelengths and exposure times need to be long to have any chance of pulling real surface details out of the noise. A large aperture helps gather more photons to improve the SNR and because the scope is a Dobsonian reflector it has a relatively short f-ratio of f4.4. This means that operating at prime focus the image surface brightness is much higher than with a design like an SCT where the focal ratio is higher. Even with all these things acting in my favour, however, the frame time had to be a comparatively long 200 msecs, I had to use 16-bit mode, and accumulated exposure times had to be 10’s of minutes to best pull out details from the stacked image.

The ASI174MM is a pretty good camera for imaging the night-side of Venus. The large pixels help further reduce the SNR when operating at prime focus, giving smoother images. Other Sony chip based cameras are more IR sensitive at around 1000nm – particularly the ones based on back-illuminated sensors. These cameras, such as the ASI290 and ASI178, however, unfortunately suffer from an issue where internal reflections of the much brighter day-side crescent swamp the night-side with false images.

Q7: We are curious about one thing – why do you like Venus so much?

Venus is particularly photogenic and looks very different at different wavelengths. In visible light it is quite bland but in the UV cloud details are very evident as you see below. 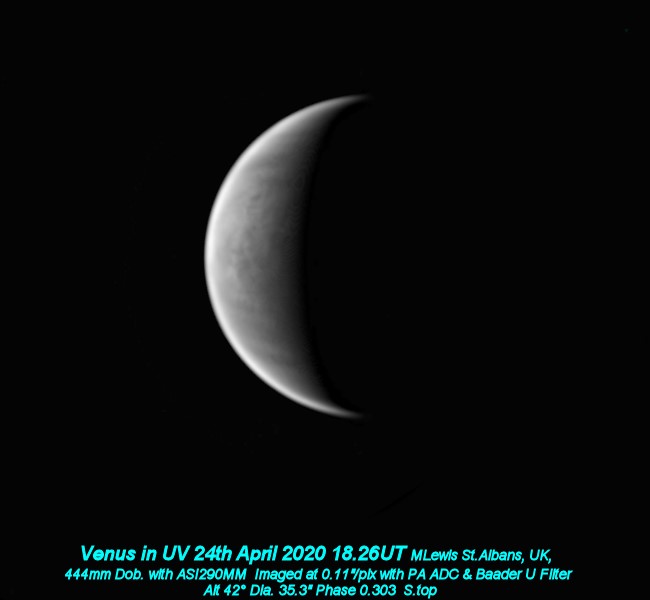 The changing phase also adds further variations in the appearance. There is something about a thin sharp crescent that stirs the soul and I love trying to capture that. Below is a recent image taken 2 days before inferior conjunction with Venus only 3.3° from the Sun, that I am particularly pleased with. 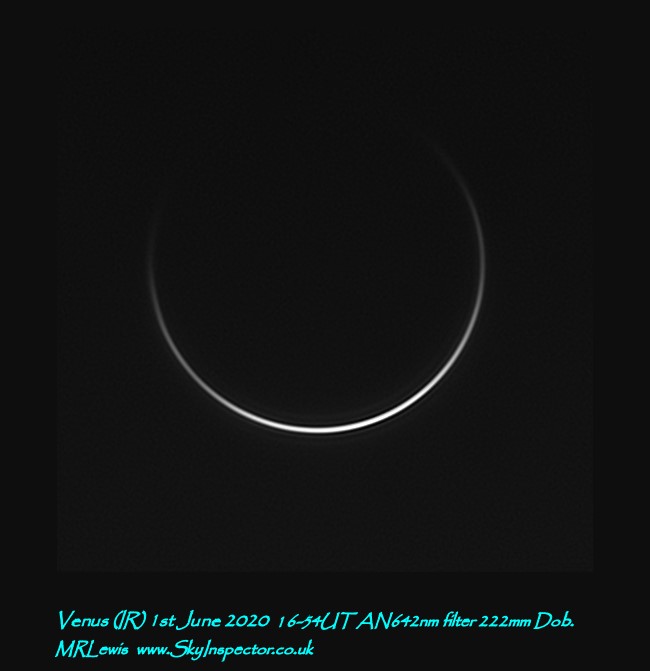 Q8: Do you have any expectation for the new planetary cameras of ZWO this year? What kind of cameras do you want most?

For imaging the night-side of Venus the best camera would have high sensitivity at  1000nm, low read noise, no internal reflection issues and, for my telescope, large pixels like the ASI174MM (or smaller pixels but the ability to bin without increasing read noise).

I hear ZWO might bring out a high IR sensitivity, low read noise, colour camera this year. That would be great for 1000nm Venus imaging as well as for other extreme imaging projects such as attempting to image the rings of Uranus and methane imaging of Jupiter and Saturn.

ZWO are at the forefront of planetary imaging technology – continually bringing out more sensitive and lower noise cameras and that is great news for us imagers who are pushing the boundaries of what it is possible to capture from our back yards!

Click here if you want to see our previous interviews with Martin: