Home
Astrography and Equipments
Jupiter in RGB and CH4 with ASI224MC

Jupiter in RGB and CH4 with ASI224MC

Martin captured Jupiter in RGB and CH4 with ASI224 camera attached on big 444-mm Dobson. What Martin said about this amazing photos?

The methane image was taken during a period of good seeing with my home-built 444-mm Dobsonian working on my equatorial platform and at f18- a slightly shorter f-ratio than I would use for RGB imaging. I used the IR sensitive ASI224MC camera with a ZWO methane filter and with the R and B balance on the camera both set to 50. Like this the camera amazingly works in this region of the IR like a monochrome camera. With the gain bumped right up to nearly maximum (550) I could image at 30fps with an exposure of 30msec an amazingly short exposure for methane imaging. I took 13 one minute long videos and picked the best 75% of the best 7 videos which were combined in Winjupos using the image derotate feature. 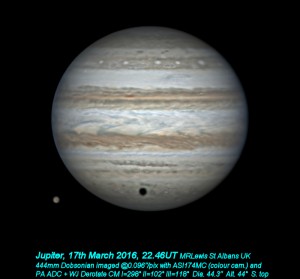 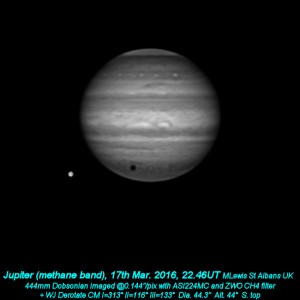 The CH4 image was taken by Martin Lewis with ZWO ASI224MC and CH4 filter.