Just get another Email from Martin show his best Jupiter  just captured with “good luck” in UK. We always need some some good luck to capture the planet under good seeing if we don’t have a chance to visit Barbados like Damian did.

” if you want to share the attached on the ZWO blog which I think is the best image of Jupiter I have taken this apparition and was taken with an ASI174MC in a period of very good seeing just after sunset. This represents the culmination of a lot of effort in improving my telescope optics and thermal characteristics and of course the use of my newly delivered ASI174MC which I must thank you for Sam. Without your efforts to get me the camera early this would not have been possible. I really think this is a great planetary camera once you adjust for the different pixel size and it worked flawlessly with none of the fixed pattern noise you sometimes see in the ASI120 cameras. It was a pleasure to use especially with the large field size to help me home in on the planet which helps with my equatorial platform tracking system where I have to manual point to the target.” 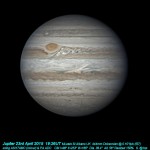 “I took 10 x 1 minute videos at a gain of 275 and exposure of 16msec in Firecapture. These were quality sorted and cropped and debayered in Pipp and stacked in AS2 using about 100 align boxes of size 50. Of the 10 vids taken during this period of great seeing 5 were the best and these were combined in Winjupos using the image derotate feature. Finishing touches including light noise reduction were done in PaintShopPro and Topaz Denoise.”

and here is the lucky story

“There was a measure of luck in this image too. My son just started a music class that evening and I had to pick him up at the time I would normally be imaging. Consequently I started imaging especially early, only shortly after sunset. Later on at my normal time the seeing had dropped off noticeably.”

One Response to Jupiter 23rd April 2015 from Martin Lewis