Home
FAQ
Does cooled camera can works without 12V power

What does 12v power supply can do?

It can power up the cooling system, and provide a extra power for USB HUB on the camera.

Do I need to plugin 12v power supply?

However, some cooled cameras with bigger sensors like ASI2600/6200/2400 do need 12v power supply to work normally.

What is Amp-glow and how do I manage it?

Amp-glow is a generalized term and has been used in CCD era. It originally referred to “amplifier glow”, however these days it generally refers to any kind of “glow” in the image that is caused by the camera itself. Glows are areas of the image that become brighter than neighboring areas due to circuitry within the camera or sensor. Historically it was usually caused by aging amplifier circuit in CCD cameras, often appearing in an area of the frame near to the amplifier. With a CCD camera, most readout electronics are off the sensor, located on the circuit board around the sensor.

When it comes to CMOS cameras, “amp glow” is usually not from an amplifier. CMOS sensors are usually “fully integrated” which means that, unlike a CCD, readout electronics are included on the sensor die along with all the pixels themselves. Each sensor has at least one, often many, ADC (analog to digital conversion) and CDS (noise reduction) units on it. There are also other support circuits on the sensor die itself these days…clock generators and power supply regulators and such. These support circuits can generate heat or may even emit NIR light, both of which can cause glows. Additionally, many modern CMOS sensors include high performance image processing as part of the sensor package, either in the form of on-die processing or a secondary processor that is directly integrated into the sensor by attaching it (often to the reverse side of the sensor.) This processing circuitry can often generate heat that may produce glows.

Heat can increase the dark current accumulated in pixels. Pixels that exhibit roundish glows, usually soft without any obvious structure, are caused by heat sources. NIR, or Near Infra-Red, may also be emitted by some sensor circuitry. NIR glows can exhibit anywhere on a sensor, may often exhibit distinct structure, and are often radiated from specific locations around the periphery of the sensor. Not all pixels in a sensor will be affected, nor will those affected be affected uniformly. Glows may not “grow” with time the same way dark current itself does, and may accelerate over time becoming brighter faster than dark current itself as exposures become longer.

In some discussion forums, the term “amp” has been dropped, and the word “glow” alone is often used to describe the kinds of glows that occur with CMOS cameras.

The first step in managing glows is to understand how they present. Amp-glow patterns are often different from camera to camera depending on the kind of sensor used. Cameras such as the ASI128, ASI094, and ASI071 utilize high quality color digital camera (DSLR and mirrorless) sensors. These sensors are designed to more exacting standards as demanded by your average photographer, and amp glows are usually minimal and barely visible at worst (often just a very slight brightening in one corner or along an edge), and non-existent at best.

Other cameras that use more specialized sensors may exhibit amp-glow. The ASI1600, ASI294, ASI183 and ASI178 have distinct patterns. Here are a few examples: 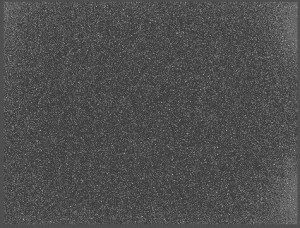 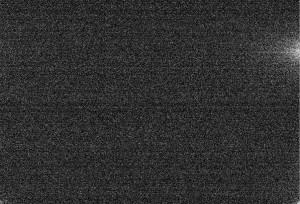 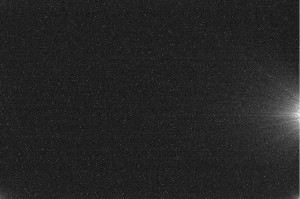 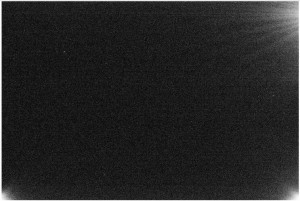 Generally speaking glows are not temperature sensitive. They are usually a more intense and often generated over a very short period of time (the duration over which the sensor is read), so even if there is a temperature dependency, the time involved often does not allow for much change with temperature. Heat-sourced glows may be affected to a small degree by temperature, however often by too little to matter in most cases, especially with the amount by which the sensor may vary during an imaging session (which should be no more than +/- 0.1 to 0.5 C).

Glows are usually not bright, however due to the exceptionally low read noise and very low dark current of most astro-specific cooled cameras, glows are often more visible. In this sense, glows can be affected by temperature, becoming easier to see under the low noise conditions of a properly cooled camera.

Does a DDR buffer reduce amp-glow?

Usually a DDR memory buffer will help minimize glows for many CMOS cameras. A DDR buffer allows the readout speed of the sensor to be maximized. This improved readout speed also applies for both USB 3 as well as USB 2 connections, although the benefits are usually more pronounced when used with USB 2.

A DDR buffer can help as much of the support circuitry for the sensor can be put into a low power mode during exposure. This additional circuitry then only “wakes up” during readout, which may only last for a short period of time, before they are returned to their low power mode. Minimizing readout time can minimize the intensity of the glows by restricting the amount of time they can affect the sensor. This process may work better for some cameras than others, and may affect some glows more than others, depending on the nature of each specific glow.

What is the Anti Amp-Glow Function?

The “Anti Amp-Glow Function” is a feature of ZWO cameras that utilizes a combination of software and/or hardware techniques to reduce the power consumption of the CMOS sensor and it’s support circuitry. This allows the glows to be better controlled…sometimes eliminated entirely, greatly mitigated or otherwise reduced in other cases. The Anti Amp-Glow Function’s benefits are most obvious on sensors such as the IMX224, IMX385, etc.

How to remove the glow in my light frame?

It is possible to remove amp glow from most CMOS cameras. Glows, like dark current, generally behave in a consistent manner under consistent conditions. As long as you control the conditions, then proper management of glows, their removal from your lights and minimization of their impact, can be done with ease.

The first step is to control the conditions. Glows are removed by subtracting a master dark frame from each of your light frames during the calibration process. The dark frame “models” the nature of the fixed pattern noise and glows of the camera. For this subtraction to be effective, you must make sure that your dark frames match the light frames in terms of exposure time & sensor temperature. You must also make sure that the dark frames are acquired at the same gain and offset settings as the light frames. This ensures that the pattern of the glows matches that in the lights identically.

The next step is to properly subtract the glows out of the lights. You must first create a proper master dark frame. Acquire a number of individual dark frames at properly matching settings to the light frames you wish to calibrate. Usually 20-30 frames will do, however if you are stacking hundreds of thousands of frames, a cleaner master produced from as many as 50 or more dark frames may help. Once you have created a master dark frame, calibrate your lights. Unlike CCD cameras, to ensure you properly remove glows, you should only subtract just the master dark. Do not use a master bias. A master flat may still be used.

Description: Help you to understand naming rules  of ASI cameras. 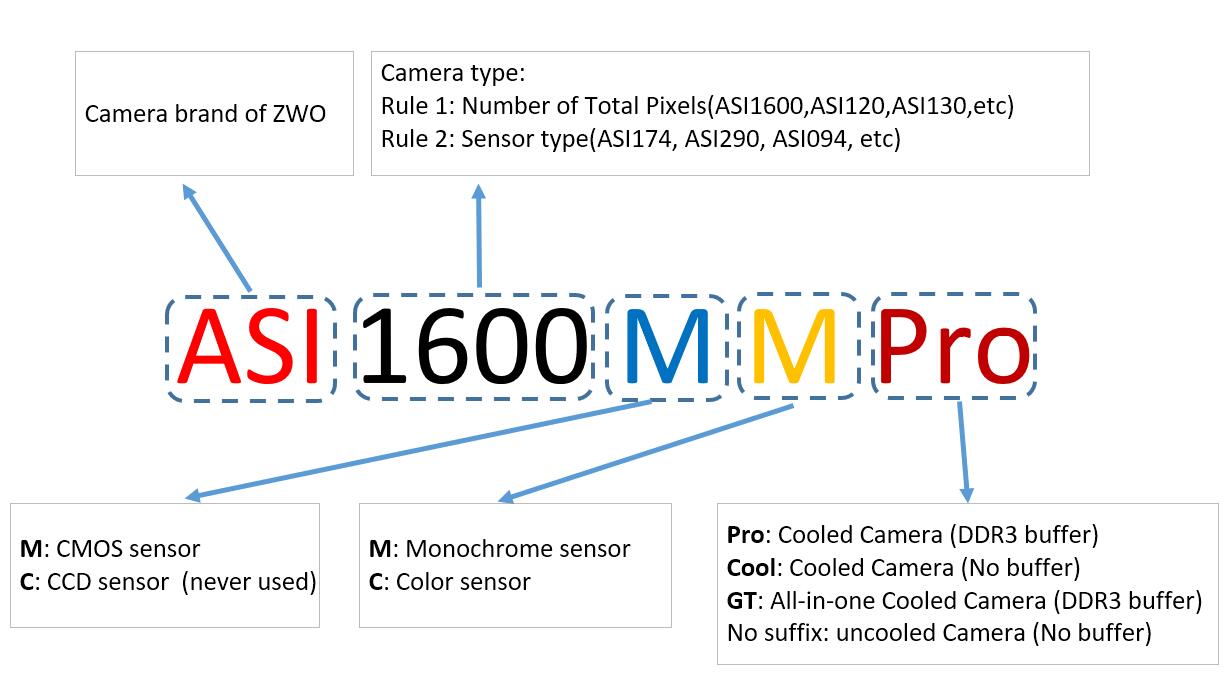 Why the cooler does not work?

Description:  Why the fan does not run? Why the temperature does not go down? 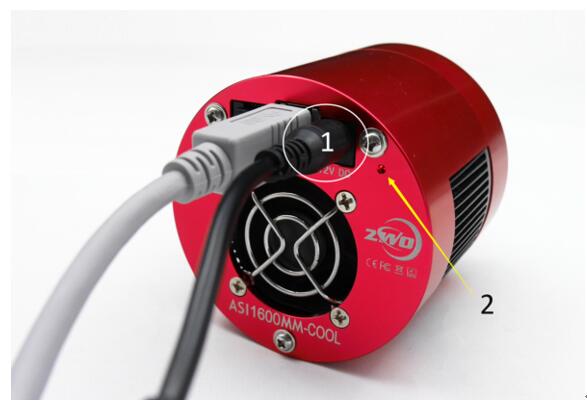 Why is the preview screen completely white but the FPS appears to be normal?

Applicable Product(s) :All ASI Cameras
Description: When you use ASI camera for the first time, you may bump into some problems, this post will help you get familiar with your camera ASAP.

What should I prepare for imaging?
Install ASI Camera drivers
Install latest capture softwares
Q: Why is the preview screen completely white but the FPS appears to be normal?
A: It may occur due to the overexposure. You need to reduce the exposure setting or reduce the gain setting until you can see the image on the screen. If you can see the fps changes ,then the camera is working properly. 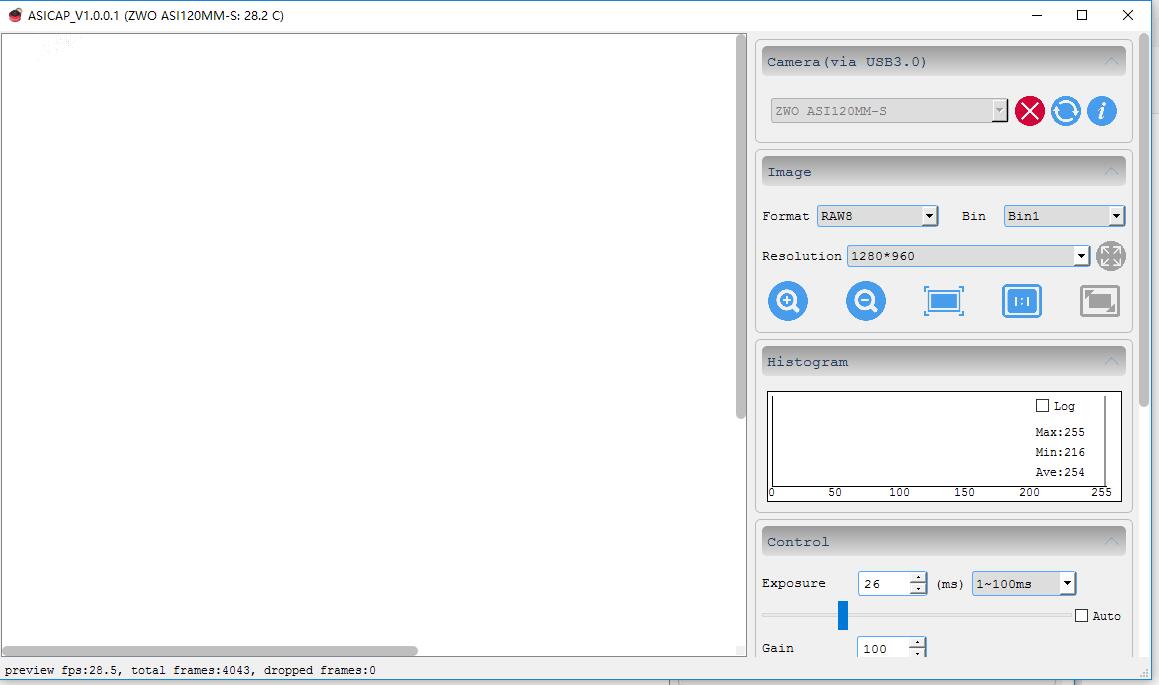 Why the preview screen is black and the fps is “0”?

Description: When you use ASI camera for the first time, you may bump into some problems, this post will help you get familiar with your camera ASAP.

What should I prepare for imaging? 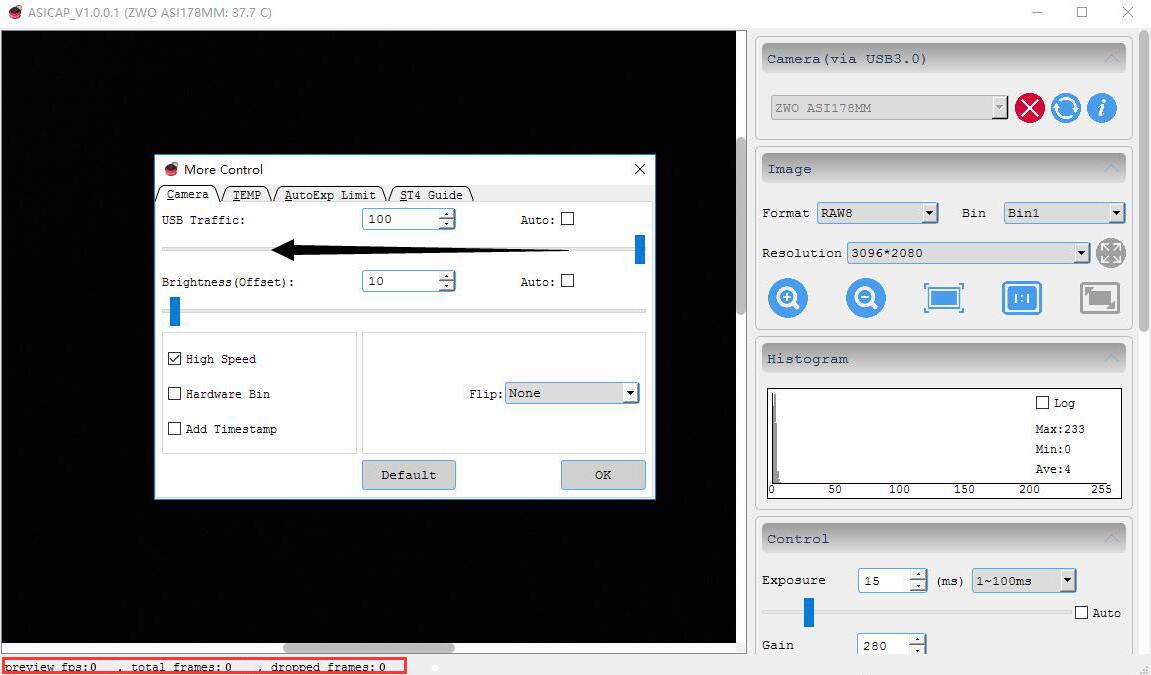 Which configuration gives me maximum FPS?

Description: Some settings will cause your FPS to drop below peak rates, this post will tell you how to reach maximum FPS for your camera. 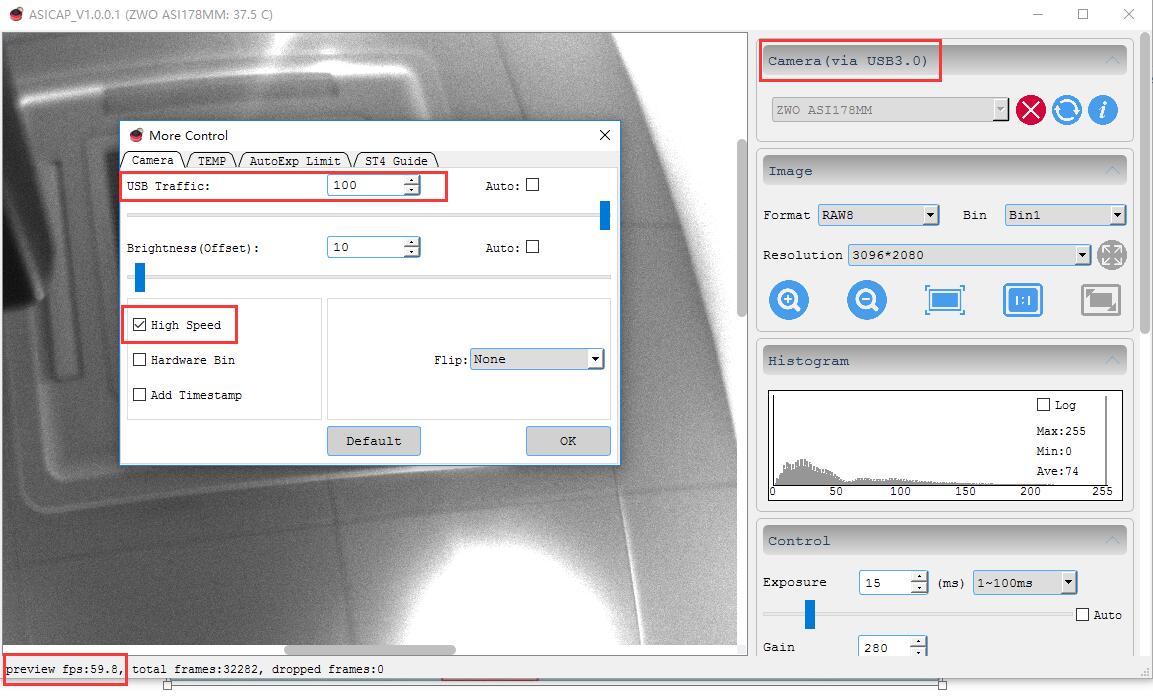 Reason of Field Tilt problems and how to solve it

Applicable Product(s) : For All ASI Cameras Description: Field tilt problems usually happen in imaging. Optical axis, flattener lens, adapters, and sensor tilt are all causes of field tilt in images. This post is to help diagnose which issue is causing your field tilt problem.
What do I setup to test? Your imaging setup is connected to the computer and there are many stars in the field of view.
Q: How do Itest if a tilt problem is caused by my telescope or by my camera?
A: Take an image with your camera then rotate the camera 180 degrees (the telescope telescope doesn’t move). Thentake another image of the same field of view. Analyze the images with software, such as CCDInspector 2.5.3. 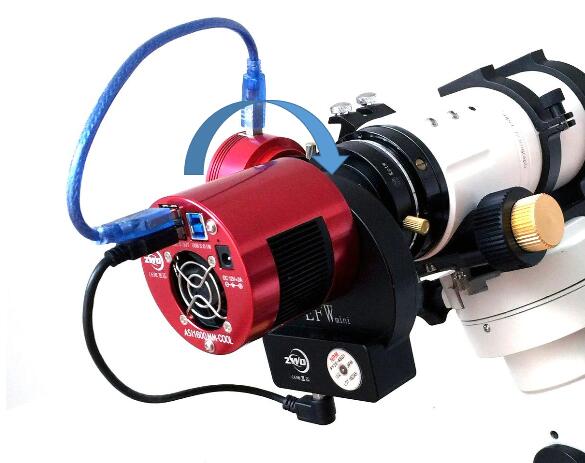 If the field has an identical pattern after rotation, then the camera has a tilt problem. 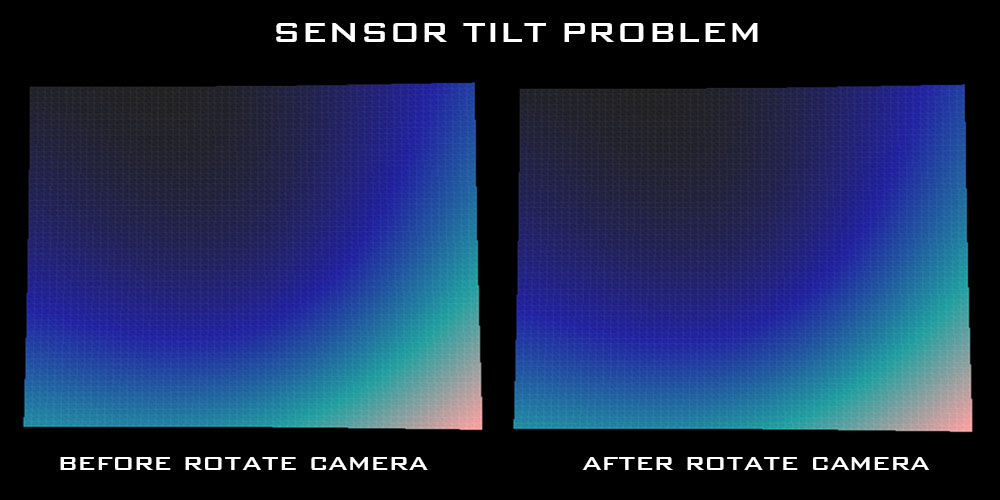 If the field has the same problem, but it has rotated 180 degrees, the telescope has a tilt problem. 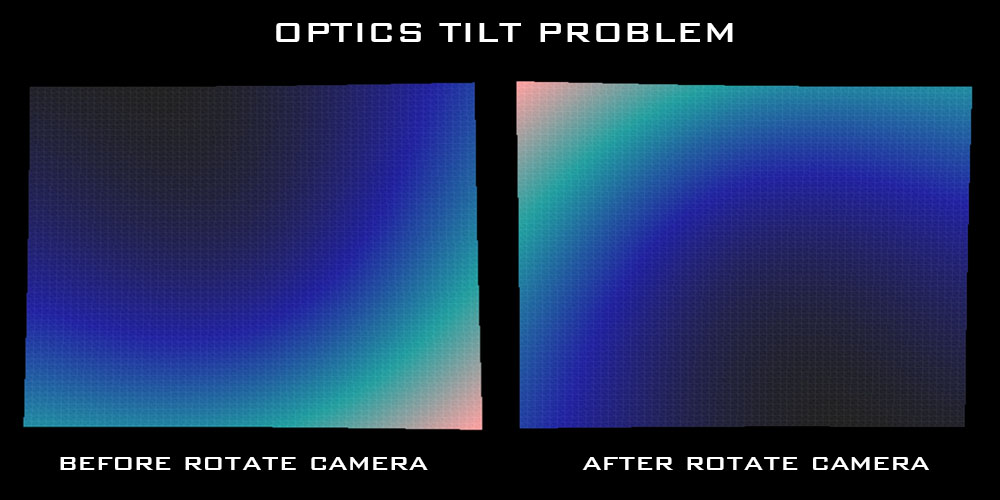 Q: How to make sure tilt problem caused by adapters？
A: 1. Remove suspect adapters, connect the camera directly to the telescope.
2. Try another adapter.
3. Take another set of images to test if the problem is gone
Q: I use a field flattener or a flattener/reducer, but I see coma in the corner of image.
A:
1. Usually this is caused by incorrect back focus (spacing between the reducer and camera sensor). Use suitable adapters make sure your camera is at critical back focus for that flattener or reducer.
2. Your image circle for that flattener or reducer is smaller than the camera sensor.

How to get the best performance from your cooled camera?

Here may be the reason the camera cannot cool so much:

Why does “Unknown device” show in the device manager after connecting the camera?

Applicable Product(s) : For All ASI Cameras Description: When you use ASI camera for the first time, you may bump into some problems, this post will help you get familiar with your camera ASAP.
What should I prepare?

Answer: Because the driver was not installed properly. Try to install the driver again. You may need to stop any anti-virus software to run the installer program. (
NOTE: Make sure you download the driver from the ZWO official web site or from the CD-ROM to prevent any malware problem!) 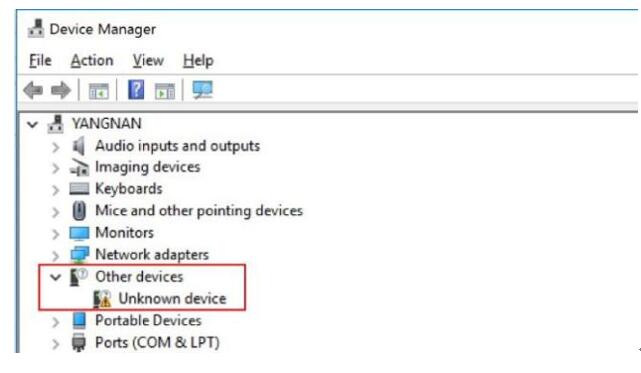 Why won’t my camera run continuously on a laptop without external power?

Applicable Product(s) : All ASI Cameras
Description: When you use ASI camera for the first time, you may bump into some problems, this post will help you get familiar with your camera ASAP.
What should I prepare? 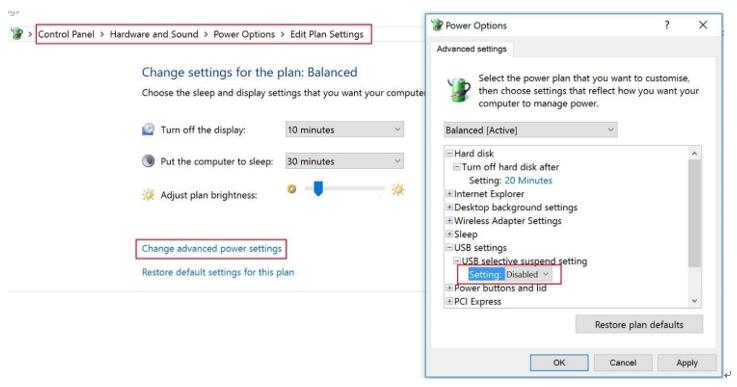