Home
Product News
Are you ready for Mars Opposition

Are you ready for Mars Opposition

Last summer, we have witnessed the beautiful Total Eclipse of the sun ,and this year, we are going to see the big and bright red planet-Mars, which is significantly bigger than normal! Mars will reach opposition as well as its closest approach to Earth on July 27th and visible throughout the night that month. In this particular instance bigger than we’ve seen it since 2003. An equivalently close approach will not occur again until September 15, 2035! 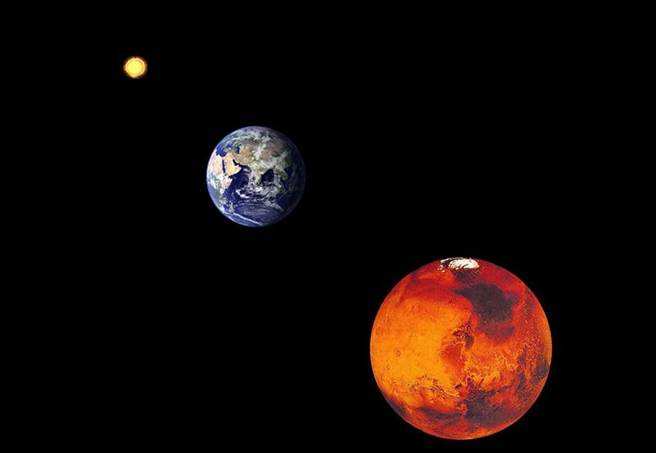 What is opposition, and why should I see it this year?

Opposition is where the Earth sits between the Sun and a planet, in this case Mars. With the sunlight reflecting straight back at Earth, this makes it particularly bright. In 2017, the opposition happens on July 27th(57.771 million km), the closet point is on July 31th(57.591 million km).

How to view the planets—Visual

Mars will be bright and easy to find through July, so don’t worry about your level of astronomical knowledge. This even can be easily observed by everyone without any difficulty! Just turn off the lights and head outside on a clear dark night. Leave your cell phone behind.  If you have a planisphere, bring it with you. A a simple way to locate which constellations are up and where they are placed in the night sky for a particular date and time.  Once you are armed with this information, you’ll be able to more easily find any planets in the sky.  Lookup , and enjoy the dark sky. 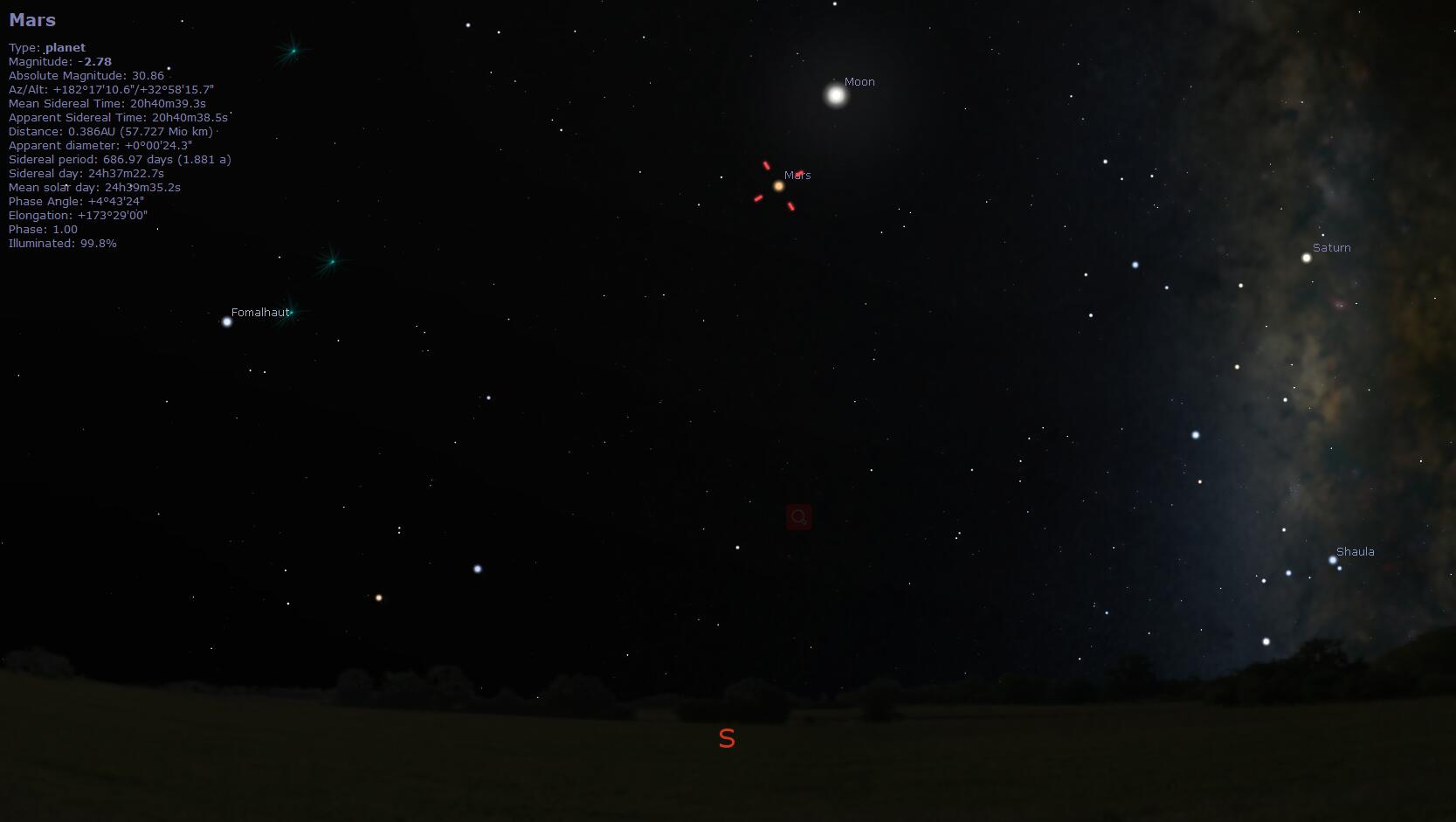 How to view the planets with ASI cameras?

People know that the Sun is really big, and the rest of the planets, by comparison, not so much, so it takes a bit more than just our own two eyes to experience much detail, even at the best of times.

However, that fact shouldn’t stop you from standing under our own planet’s giant dome of stars late one night to experience the planetary dance this summer, and if you have a little bit of help from a telescope and eyepiece, you will see some details. 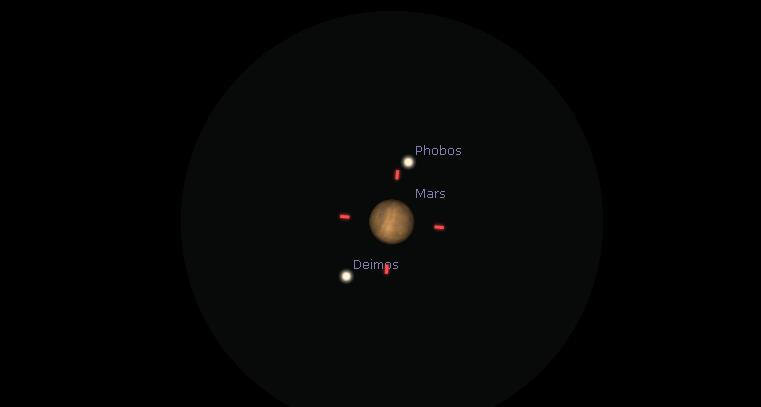 Mars taken by ZWO planetary cameras can provide significant result if the seeing is great!

First picture shows , Mars is getting close to Earth from January to April this year. 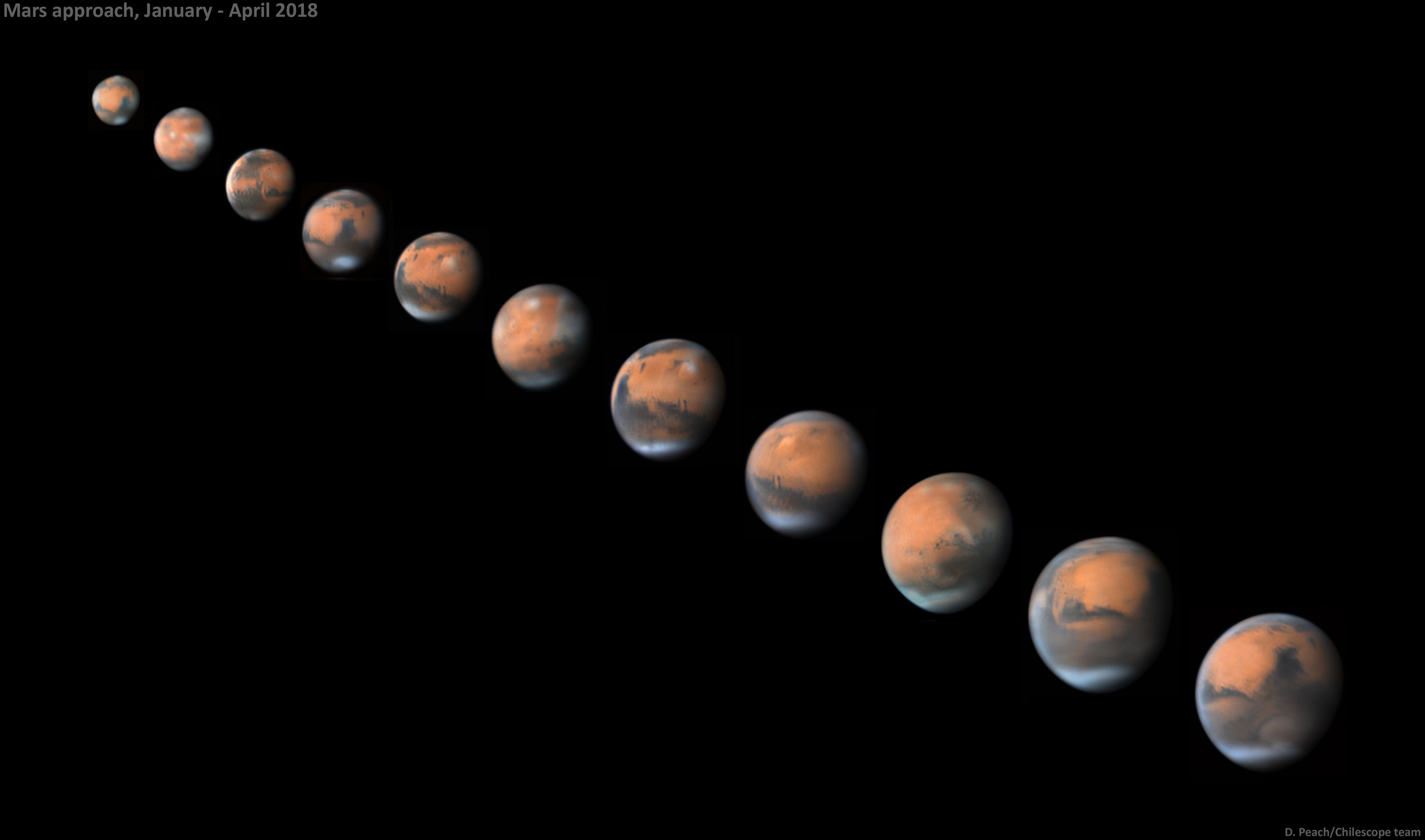 This image was taken on June 8th, about 50 days before opposition, diameter of Mars is only 16.6″, but the details is amazing! 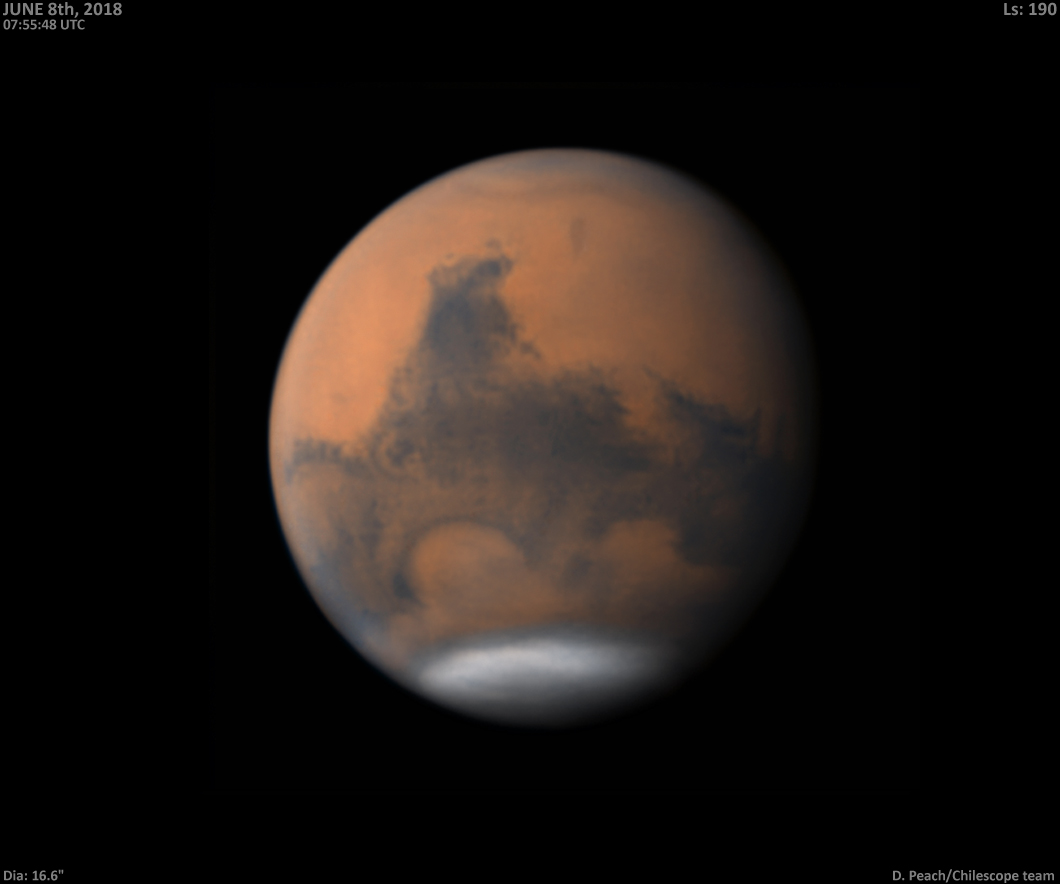 On July 27th, Damian’s new image shows that there is a global dust storm on Mars, it makes all the details blurry ; ( 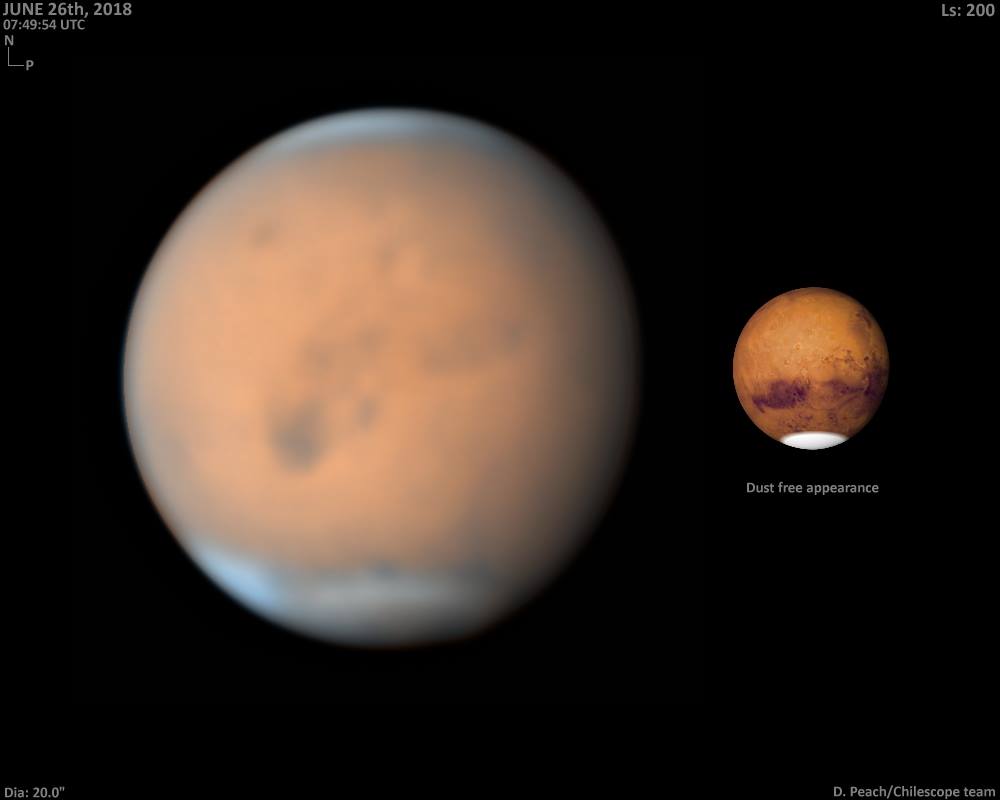 In the next day, Damian released another image. It looks like that the storm abated but still has influence on the details of the whole planet. 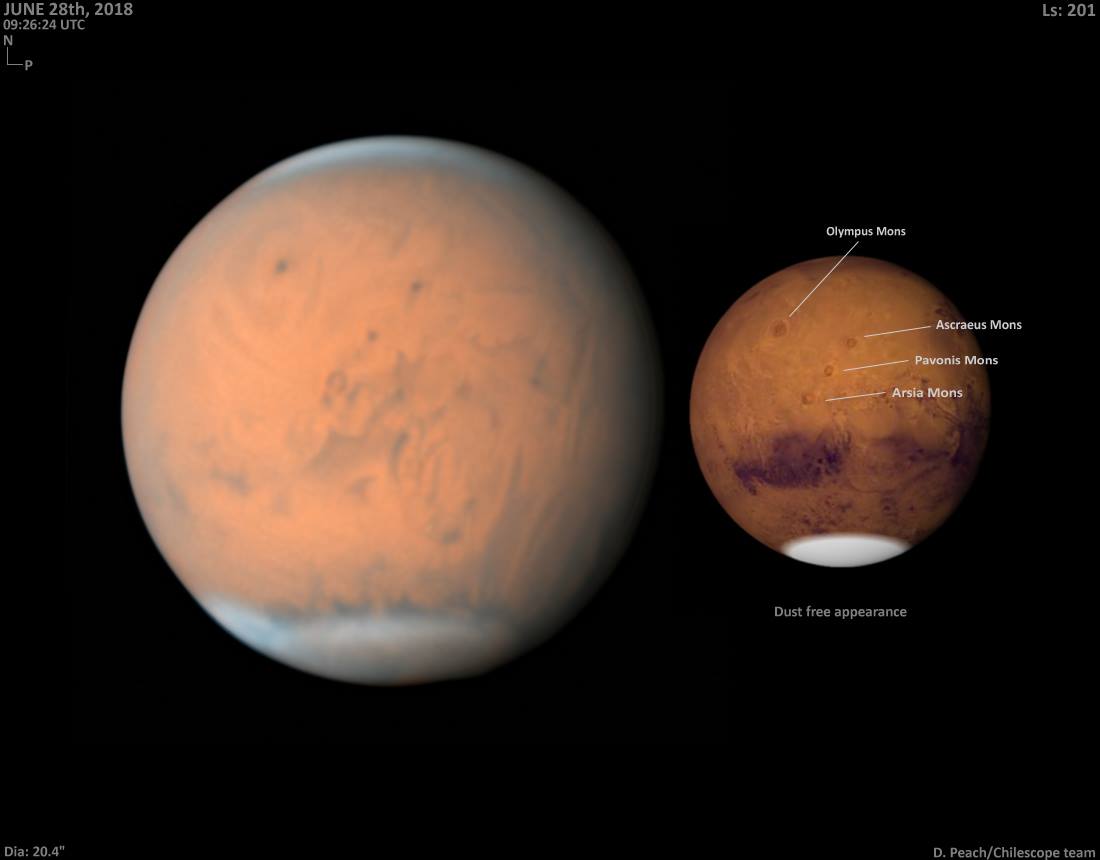 Which cameras are recommended for Mars opposition?

We provide 10% discount for following planetary cameras during the whole July! 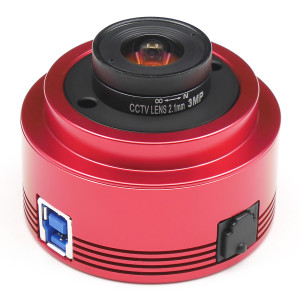 This is the most famous planetary color camera. When it appeared, even mono camera is ‘afraid’ of its’ outstanding performance.

This is the most famous planetary mono camera, Damian peach use it with 1meter telescope to shoot Jupiter in Pic du midi observatory.

Color version of ASI290 camera, depanding on its’ 2.9um pixel size, it can provide 30% higher magnify and resolution than 224 camera.

This is a new planetary camera, same pixel size as 224MC, but the sensor size is bigger. It is good for planetary imaging and DSO lucky imaging.

Hope the dust storm on Mars can disappear soon! And everybody can enjoy the beauty of this red planet at this special moment!